Norio Sakurai’s Boku no Kokoro no Yabai Yatsu (published in English as The Dangers in my Heart) has topped AnimeJapan’s 2021 ranking of ‘Manga we want to see animated.’ Voted on every year by fans in conjunction with the event (usually held in person, but this year entirely online), it shows just how much of an effect the love comedy series is having, despite only releasing a couple of volumes.

Since beginning in 2018, Boku no Kokoro no Yabai Yatsu has gone on to win the Tsugi ni Kuru Manga Awards and gain a very respectable fourth place in the Tsutaya Comic Awards, both in 2020. These accolades are well deserved: the series explores a unique central relationship and doesn’t waste any time in bringing them closer, making it into a very refreshing genre piece. As of the time of writing, four volumes are available in Japanese. 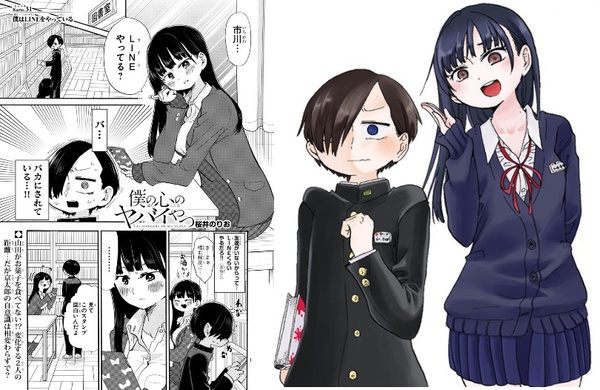 Other series featured on AnimeJapan’s 2021 ranking of ‘Manga we want to see animated’ include: Solo Leveling by Chugong and Dubu (Redice Studio) at number two, Senpai wa Otokonoko by Pom at number three, and Oujisama to Neko by Umi Sakurai at number four. Solo Leveling coming so high is surprising, given that it is a Korean webtoon, but shows the growing internationalism of the manga market. Tower of God and The God of High School’s recent adaptations also give some hope that it can indeed one day become an anime.

Going down the rest of the list, Watashi no Oshi wa Akuyaku Reijou by Inori and Shimo Aono came in at number five, while SPY x FAMILY by Tatsuya Endo came in at number six. This is a significant downgrade for a series that came joint second alongside the likes of Chainsaw Man last year. Meanwhile, Onii-chan wa Oshimai by Nekotoufu came in at number seven.

Komi Can’t Communiate’s placement at number eight begs the age-old question: why doesn’t it have an anime yet? Only God knows. Finally, My Lvl999 Love for Yamada-kun by Mashiro came in at number nine and Kusuriya no Hitorigoto by Nekokurarage (original story Natsu Hyuuga) came in at number ten, once again.

You can see the full list of AnimeJapan’s 2021 ‘Manga we want to see animated’ ranking via the official website.