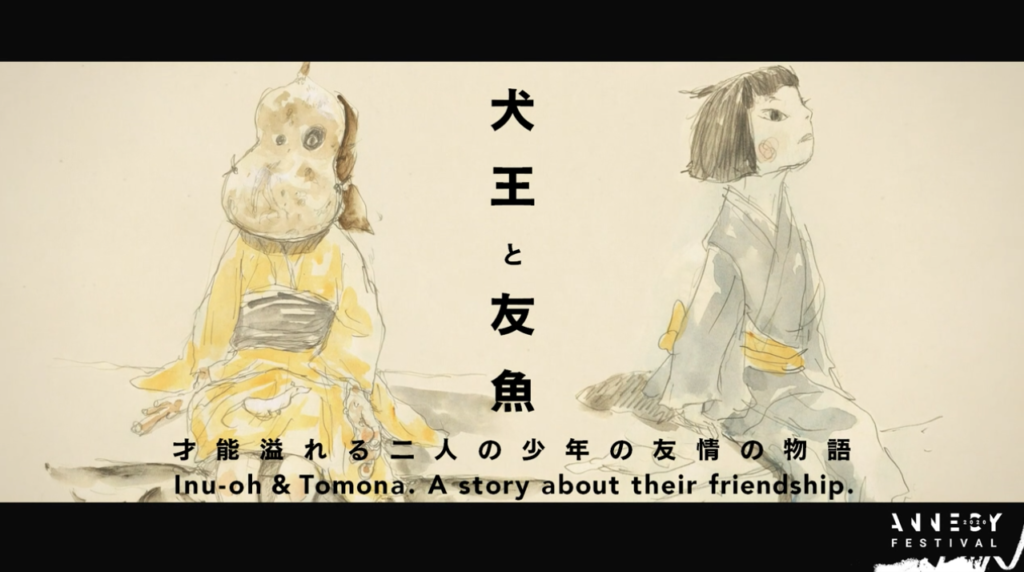 Today marks the first day of the Online Edition of the 2020 Annecy Film Festival. I recently previewed the festival here at Otaquest, discussing the array of content on offer through the event that makes a streaming ticket a must-buy for anyone with an interest in the art of animation. Perhaps one of the most exciting features for the event wasn’t necessarily one of the feature films in competition but a featurette found in the work-in-progress section of the festival. Here at Annecy Online, eager fans could get a first tantalizing glimpse at what to expect from Masaaki Yuasa’s latest feature film, Inu-Oh. 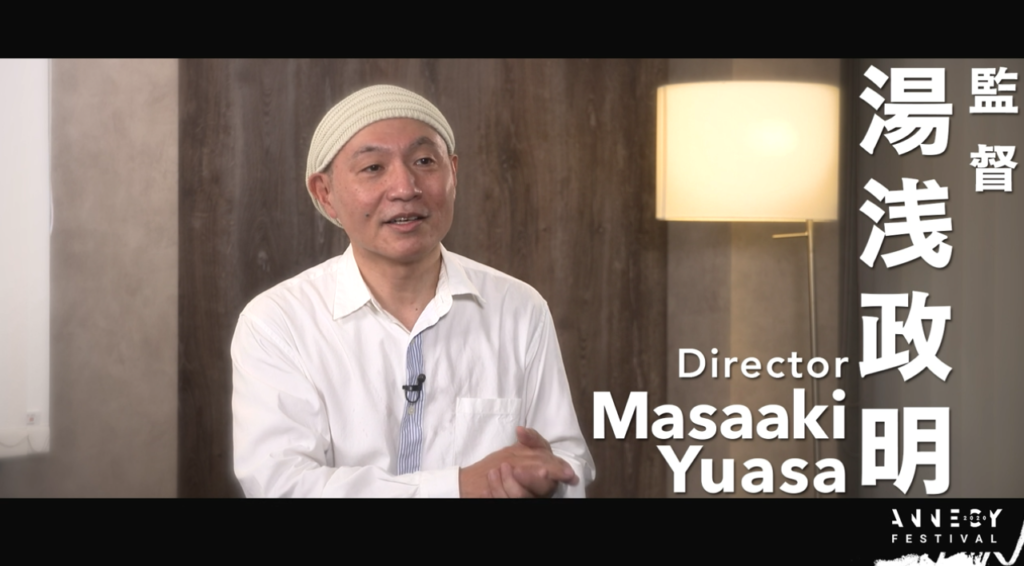 Before the festival, little was known about this upcoming film aside from a brief synopsis. Inu-Oh was based on the real-life Noh performer of the same name who performed to great success in the 14th century. Nowadays, little his legacy is known to exist bar a few surviving documents chronicling his talents. As a result, Masaaki Yuasa has taken liberties to reimagine the character as a cursed young boy who befriends a Biwa player before going on to find great success as performers in 14th century Japan.

The Annecy preview of Inu-Oh begins by setting the mood through a modern-day Biwa performance where we’re introduced both to the film and Yuasa himself. Alongside elaborating on this initial synopsis, Yuasa uses this moment, and indeed the entire work-in-progress preview of the film, to explore the tone and intent this work is looking to achieve. 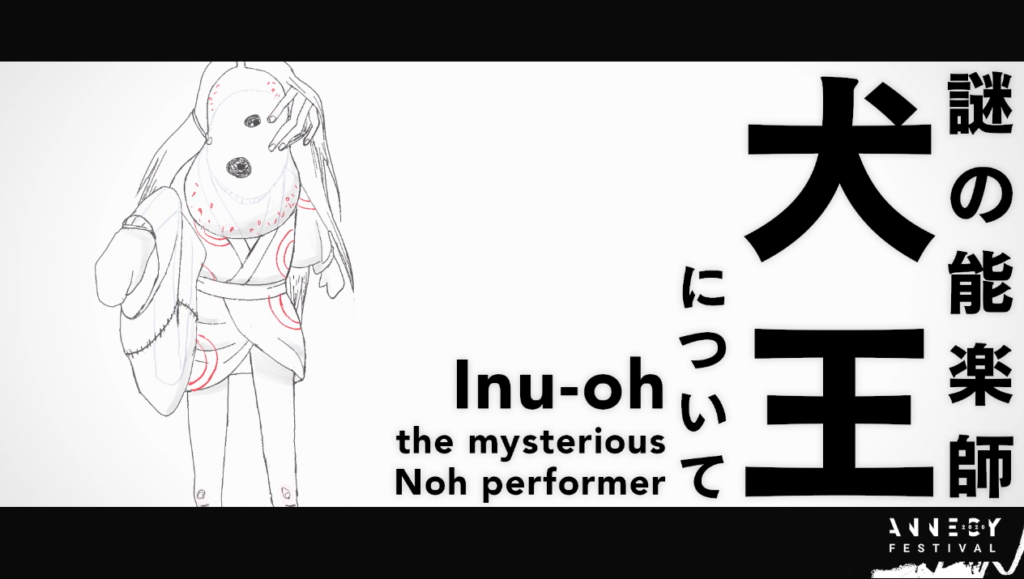 With Inu-Oh, Yuasa is reinterpreting the Noh performers as the equivalent of today’s modern-day superstars. What if the Noh artists and Biwa performers were just pop stars and celebrities, with many, like Inu-oh, now forgotten to time. After all, although Noh performances of today may look slow and sophisticated, this was mainstream entertainment for the masses, while Biwa performances that honored fallen soldiers were revered by the masses. 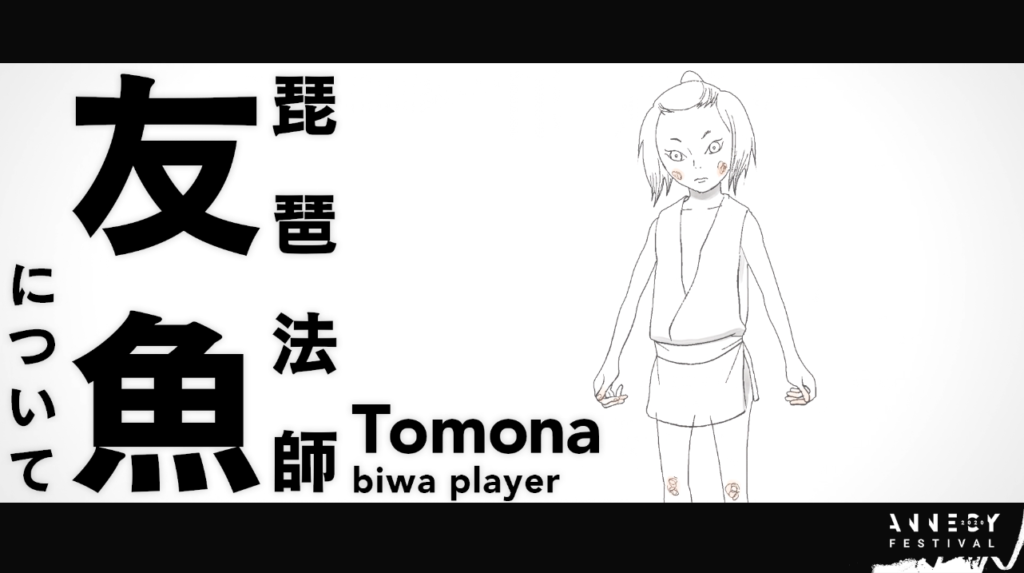 Inu-Oh is a boy filled with positive energy, yet is saddled by a curse. Tomona, on the other hand, is a blind Biwa player who doesn’t judge Inu-Oh for their curse, and together they perform to great success. Character designs for the film have been handled by Taiyo Matsumoto, who previously worked with Yuasa on Ping Pong: The Animation.

While talking about these designs during the Annecy Online preview, Yuasa noted that he was given free-reign by Matsumoto to push the envelope out and create whatever he wanted for Inu-Oh. For example, clothing of the time was referenced but not strictly adhered to when forming the visual look of the film. More elegant and eccentric outfits inspired by the era have also been used, with the overall style being inspired heavily by Edo-era Ukiyo-e prints. 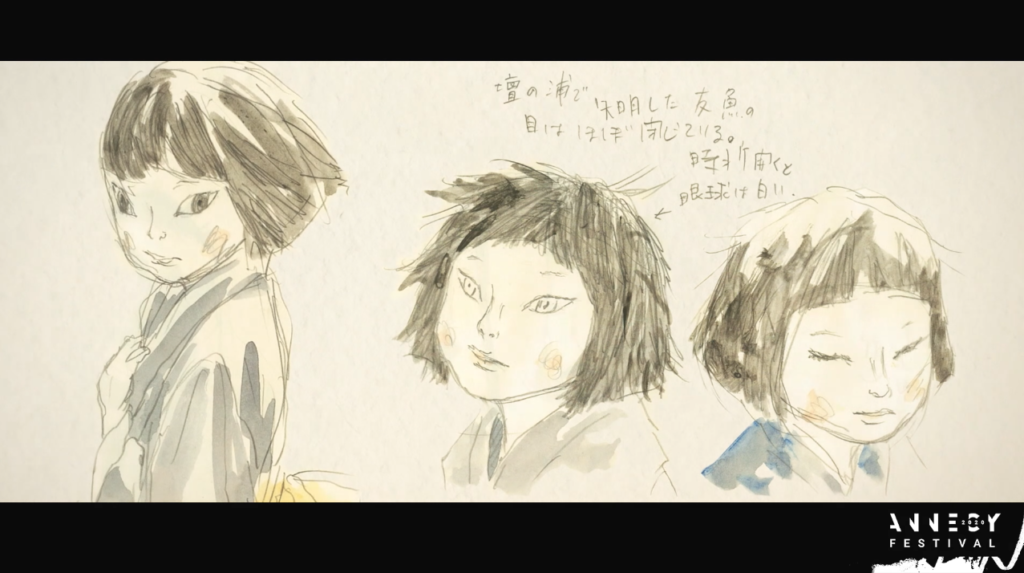 The most exciting thing about the Annecy work-in-progress preview for Inu-Oh is an early look at the film’s animation and visual style. Here an expressive, experimental design has been utilized that blurs outlines to the point of being unrecognizable, all for the intent of bringing out heightened emotions from each scene.

A digital animation workflow has been created for the film which puts the initial linework through several filters that can be altered at will to create the desired effect of a scene. This allows the visuals to match the film’s ambitious concept of a work that blends the line between fiction in reality when portraying 14th century Japan.

With Tomona being blind, the character relies heavily on their hearing to understand the world around them. This stylistic choice helps in this department as well, with an early scene showing the world shrouded in darkness except for that which makes a sound, such as the clopping of the horse’s feet or the rustling of transported materials. Depending on how interesting these sounds are, the objects also become more or less vivid, and it’s through this that the filters are being used to create a visual representation of a world of blindness.

Yuasa’s work has always sat beyond the traditional bounds of Japanese animation, refusing to conform to the standard conventions of how an anime film should look. It gives Yuasa’s films a unique look that no other work in the industry can match, even in his more conventional films like Lu Over the Wall and Ride Your Wave. The visuals often serve a metaphorical purpose, transforming to fit the tone of a scene as seen in Devilman Crybaby, and this is being put to full effect here.

Inu-oh and Tomona are ‘like the Beatles’, as Yuasa puts it, their instant stardom creating a fervor of excitement around them in sight and sound. The Annecy sneak peek of Inu-Oh conveys this well.

The preview given to Inu-Oh at Annecy Film Festival cements the movie as one to look forward to upon its release next year. These early character designs and snippets of animation only serve to showcase the potential this film possesses to be something truly special. Having worked on many films and series in recent years that I was personally left fearing it was possible to have too much of a good thing, it’s reassuring to see the film is shaping up to be another strong film from the auteur director.