We’ve talked about Carole and Tuesday throughout 2019 as it was a highly anticipated show.

The shows’ world was being developed by Thomas Romain’s Studio No Border, and it was also directed by Shinichiro Watanabe, the director behind Cowboy Bebop, Samurai Champloo, and Space Dandy. Needless to say, a lot of eyes were drawn to this show and while some may say it wasn’t that great upon first glance, the show has a lot of qualities that make it a solid, worthwhile watch. However, the show does perpetuate some harmful stereotypes that can make it hard to watch.

Carole and Tuesday is set in Alba City, the biggest city on a terraformed Mars. The two girls are brought together by their love of music and hopes of one day making it as recording artists. In the first season, the girls audition to be on Mars’ Brightest, a musical talent show to find the next big star. The second season follows the girls as they navigate through their newfound popularity, the music industry, and using music as a political statement. 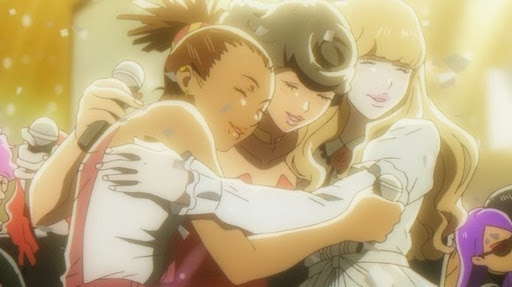 Carole is a determined girl who has dreams of becoming a musician and plays the piano/keyboard. She was orphaned at a young age and tries to get by working a lot of part-time jobs, but due to her way of handling confrontational people and delicate situations, it’s very hard for her to keep one. This doesn’t bother her one bit as she continues to push forward to achieve her dreams.

Tuesday is also a determined girl who dreams of being a musician and she plays the acoustic guitar. Tuesday comes from a wealthy family and had a very sheltered upbringing. As a result, she’s an introvert, has a lot of problems with socializing, and is often taken advantage of.

Angela is a famous model who makes the transition into a singing career. At first she appears to be a selfish, entitled brat, but over time her true motivations come to light. By the end of the show, Angela’s true kind nature shines through, but she still has some diva in her.

Gus is Carole and Tuesday’s manager.  He’s direct and passionate about music and will do anything to help his artist’s careers. He became a manager after his own musical career failed.

Roddy is kind of like Gus’s right hand man. He’s usually seen helping Carole and Tuesday by promoting them to his friends in the music industry. He’s a rather quiet guy and prefers to work behind the scenes, but he’s always ready to support his friends.

Dahlia is Angela’s mother who used to be a famous actor, but when she became an adult, no one remembered her. She’s very strict with Angela because she doesn’t want her daughter’s career to burn out like hers did. Like any mother, Dahlia wants nothing but the best for her daughter and will do what she can to make sure that happens.

Tao is a music producer who uses artificial intelligence (AI) systems to write music based on popularity trends. Tao works mostly with Angela throughout the series and is very cold and calculative. However, he cares deeply for the people around him, but he never shows it. 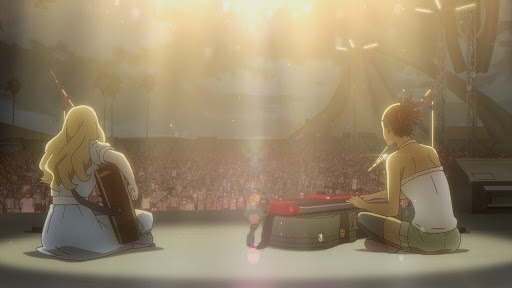 What’s Good About This Show?

Carole and Tuesday’s dynamic is the driving force of the series. From episode 1, it was obvious that the duo’s meeting would lead them to bigger, better things. Their love for music forms the foundation of their friendship, but it’s almost as if the two girls were brought together to complete each other.

Carole gives timid Tuesday the push to become more assertive for herself and to not be afraid to stand up for what she thinks is right. Meanwhile, Tuesday shows independent Carole kindness and teaches her that it’s okay to rely on others and confide in the people around her. Both girls offer each other something the other was missing while also filling in a hole they both shared.

Diversity in anime is very hard to come by even now in 2020, but Carole and Tuesday is full of a diverse cast of people of color. This is very hard to come by, and this is one of the few anime that has a cast full of people of color. The only other anime I can think of that mirrors this is 2008’s Michiko to Hatchin; however, there are plenty of anime that have people of color like Hunter x Hunter, Jojo’s Bizarre Adventure, and Black Butler, but they aren’t as prevalent in their shows.

The show’s characters are influenced by actual recording artists such as Beyonce, Whitney Huston, Stevie Nicks, and Ed Sheeran. The soundtrack reflects these influences by having the characters sing soulful pop songs and also having acoustic songs mixed in as well. Some notable songs from the show are Round & Laundry, Move Mountains, Unbreakable, and of course the famous Galactic Mermaid by the Mermaid Sisters.

The soundtrack was a massive success amongst fans to the point where a concert was held. The first Carole and Tuesday concert sold out, but it was live-streamed for paying viewers on youtube, but a free link did manage to slip through the cracks.

The show could’ve easily been a feel-good show set in an utopian world where nothing bad happens, but then it would’ve been a typical idol show. Instead, Carole and Tuesday points out the injustices people face for speaking out against the government’s inhumane acts and beliefs. It also talks about what happens behind the scenes when it comes to political campaigning.

Carole’s childhood friend Amer Souleyman who is also known as the rapper Ezekiel becomes an enemy to Mars’ government. Ezekiel raps against the immigration laws of Mars which ends up with him getting deported back to Earth. This mirrors what’s

been going on in the United States with the government deporting people who were brought to the country at a young age and who in many cases weren’t even aware they weren’t born in the States.

Tuesday’s mother Valerie is running to become Mars’ president, but in order to do so, she must compromise on a lot of her beliefs in order to gain a majority vote. In this case, Valerie is against a lot of the ideals of the party she ends up aligning with, but in order to win the election, she goes along with what they want her to say in order to obtain votes. However, Valerie acknowledges that she’s doing more harm than good by compromising on her ideals as she doesn’t believe in half of the things the party is making her endorse.

This was all happening as Carole and Tuesday were trying to build their career, but the show also showed how each of these things affected them. Ezekiel’s case affected Carole because she knew Ezekiel from when they were both in an orphanage together, and she was excited to reconnect with him again. In Tuesday’s case, watching her mother condone racism, deportation, and other horrific things she knows for a fact her mother is against filled her with so much pain. However, instead of letting it consume them, the duo tried their best to fight back in their own way: by staging a musical protest with the help of other recording artists.

The show talks about the dark side of the music industry, stalkers. In the series, Tuesday gets her own stalker, Cybelle. Cybelle’s a competitor on the show Mars’ Biggest with Carole and Tuesday. Upon meeting the duo, Cybelle is quick to latch onto Tuesday and tries to do whatever it takes to have Tuesday all to themselves. Cybelle even goes as far as to hurt Tuesday by burning her hand and biting her whenever Tuesday rejects Cybelle’s advances. While Cybelle does exit the show, they are only one of the stalkers that gets the limelight in the series.

Angela also has her own stalker who uses the name, Black Knight. This stalker goes through all of the trouble to hack Angela’s AI pet to get private photos of her laying around in her home and even harm members of her security team. Everything escalates because of him and he goes as far as to threaten to end Angela’s life during one of her performances which highlights a very real danger many artists have to deal with all around the world. 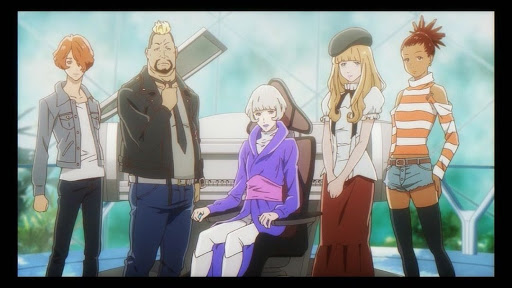 The LGBTQIA+ Representation in the Western Localization

Marie is a very minor character. She’s introduced as a makeup artist in season one, and she also happens to be Gus’s ex-wife. She tells the girls about why she fell for Gus in the first place and also talks about the reason for her divorce: she fell in love with a woman. Despite their history, Marie and Gus still have a positive relationship, and they do care for each other. Her relationship with her girlfriend, Ann isn’t used to set up a joke, and they’re the most respected relationship in the series.

Cybelle is a minor character who appears in season one, and in the Japanese version, they introduce themselves with gender-neutral pronouns, but others refer to Cybelle as a female.

In the English version, they use female pronouns. Cybelle is also implied to be a lesbian or bisexual due to their attraction to Tuesday. However, Cybelle’s role in the show left viewers divided on continuing the show due to the fact that men are predominantly stalkers, not non-binary people.

The Mermaid Sisters were also competitors on Mars’ Brightest and gave viewers one of the best things to ever happen to the internet: a song that everyone can relate to. Upon first glance, it’s obvious that the sisters are on the gender spectrum. This is also reflected in their name, the show explains that mermaids are neither human nor fish, and they want to become a new race, the Mermaid Sisters. However, the show paints the sisters as extremely violent individuals compared to all of the other characters who were rejected on the show.

Desmond is another minor character who shares many commonalities with David Bowie. Desmond was born as a male, and in flashbacks lives a life as a male, but like Bowie, plays with their gender expression. However, upon moving to Mars, Desmond’s body starts to change from male to female because of some weird chemical on Mars that affects people who weren’t born cisgender. However, the show is very clumsy with this narrative because the chemical is also stated to make the people intersex, and it shows that the people behind these decisions didn’t do much research into these issues.

Dahlia is a major supporting character and from her first appearance, it’s very obvious that Dahlia is a trans woman. However, the show has trouble finding the language to properly address it by referring to her as intersex or androgynous, which don’t mean the same thing. The same chemical that affects Desmond is also used to explain Dahlia’s situation, but the show paints Dahlia as a very violent figure who abused Angela in the past due to it being a side effect of her medication. This paints a horrible message about people who are on hormone replacement therapy because people on this medication are not violent in any way, and the show is spreading false information on the matter.