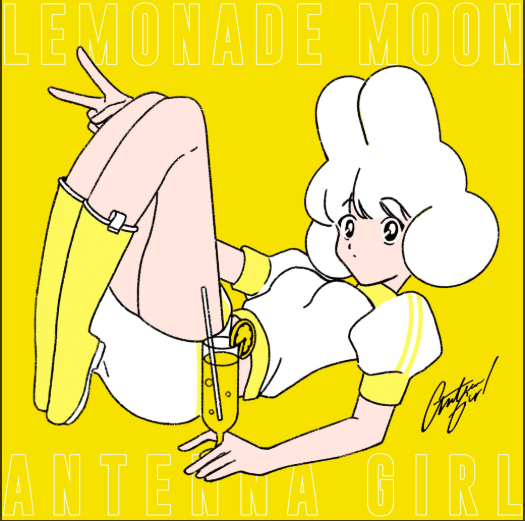 Enough weeks have passed now that many of the musical releases that debuted at this Spring’s M3 event are now getting rolled out for wider consumption. Electronic artist Antenna Girl offered up one of the highlights from this season’s grabbag of indie music releases with Lemonade Moon. This mini-album finds her teaming up with a variety of producers and dabbling in a variety of sounds, all tied together by her higher-pitched singing and ability to glue a pop hook to each creation. Listen below.

Fans of Japanese electronic music should get a treat out of combing the production notes on this one. Antenna Girl recruits a lot of inspired creators to help shape the sound of Lemonade Moon. Mikeneko Homeless brings piano jaunt to “Lemonade,” pairing the ivory melody up with a bouncy beat bringing out the best in Antenna Girl’s voice. “Nyu” sees Tomggg and Hercelot bring their playroom-pop sound palettes together to create a bouncy number featuring a bunch of Antenna Girl’s hopping off of one another. South Korean future funk pioneer Night Tempo adds a New jack swing to “Crazy Love,” a number which finds her vocals a bit more muffled.

Whether up front or a little more downplayed, Antenna Girl’s singing goes a long way to making this one work as a cohesive album. Her voice often goes under some sort of manipulation — besides the quieter “Crazy Love,” she plays around with multi-tracking throughout, while closer “Last Summer” warps a cascade of her syllables into a melodic foundation for the song to build on.

If you happen to be in Tokyo on June 1, head to LOUNGE NEO in Shibuya to see the Lemonade Moon release party. That gathering also features a lot of the producers helping shape get a chance to perform, with Antenna Girl headlining.