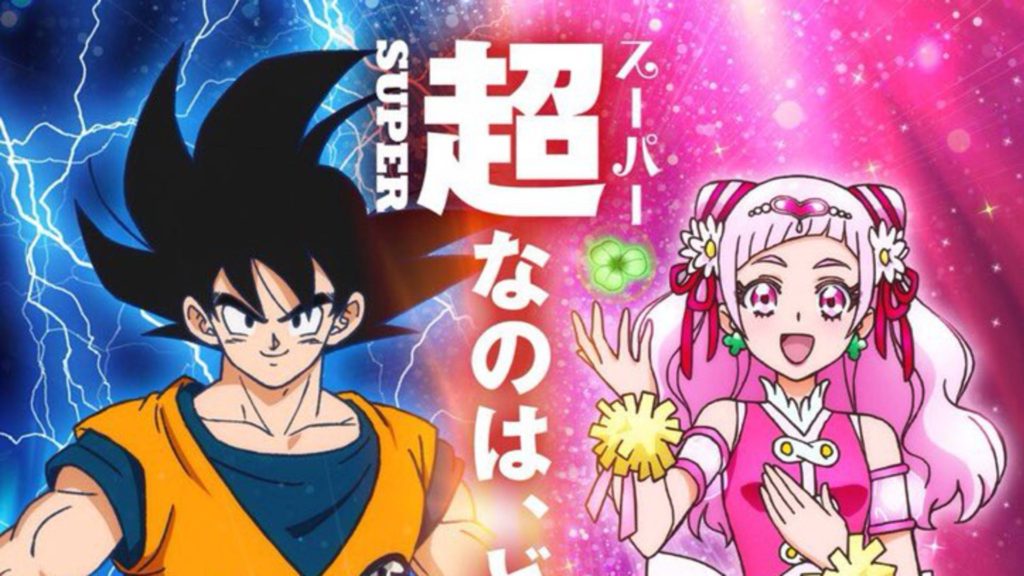 April is a special time in Japan – the sakura bloom, the sun comes out, and on the first, legions of fans are fooled by fake announcements in the spirit of April Fools’ Day. Below are some of our favorite April Fools pranks of this year’s festivities.

It’d be safe to say that, following the end of Dragon Ball Super and the brilliantly animated PV for the upcoming movie, Dragon Ball fans are waiting with baited breath for news regarding the future of the series. Well, be careful what you wish for, as even Dragon Ball wasn’t safe this year from tomfoolery:

With the tagline of “Which one is the strongest?!”, the Dragon Ball Super x Precure Superstars movie promises to explore the origins of the Saiyans, as well as usher in a return to Dragon Ball’s roots. That, or it’s a hilarious joke stemming from the fact that both series are owned by Toei Animation. Is this really what the newly formed Dragon Ball independent production department are spending their time on?

Another crossover, if a less outlandish one, came in the form of the announcement of a Thunderbolt Fantasy x Touken Ranbu film:

A collaboration between Gen Urobuchi’s puppet samurai drama and Nitroplus’ samurai bishonen mobile game wouldn’t be that mismatched if I’m honest. This one had me thoroughly fooled for longer than I’m comfortable to admit.

Similarly, it took me a good while to work out that announcement of a Godzilla rollercoaster attached to the Marunouchi Building near Tokyo Station was also a joke. Check out the concept images below:

Considering Godzilla’s status as a national icon – the kaiju even becoming an ambassador for tourism in the Shinjuku ward – it honestly wouldn’t surprise me if such an outlandish project did actually turn out to be true. But alas, it seems like we’ll have to make do with the light-up Godzilla head on top of Toho Cinemas Shinjuku for now.

Moving over to the mobile game sphere, two titans of the genre weren’t exempt from some April Fools fun. Players of Love Live: School Idol Festival in Japan woke up on the 1st to a new gacha – hardly unusual – but this time featuring the child versions of both μ’s and Aquors from Love Live! School Idol Project and Love Live! Sunshine!! respectively.

This wasn’t just a joke either, as players who rolled on the gacha and received these new cards were actually able to use them in the game. Perhaps a new meta for the popular rhythm game will emerge from this? Only time can tell.

Veteran and innovator of the genre The [email protected] also had lots of goofs and gaffs to play in their numerous mobile games. The Kirarin Robo from the OVA shorts series The [email protected]: Cinderella Girls Theatre finally made an appearance in the rhythm game Starlight Stage as the focus for the special one-day Kirarin Earth Defense Battalion event. Check out the hilariously over-the-top opening movie below:

If you haven’t seen the new opening for the Kirarin Robo app yet, here it is! Please enjoy the opening and all its loud sound effect splendor! pic.twitter.com/rXDGJKDlV1

But if we’re talking over-the-top, then we really ought to talk about one of the latest additions to the [email protected] mobile game empire – Million Live! Theatre Days. It too saw host to a one-day event Million Lie: Fishing Days where users had to, well, fish for some lost sheet music for a new song from various places, from the Arctic to space. Each stage also saw the story build in hilarity and ridiculousness, featuring various idols from the series.

It wasn’t all fun and games though, as the event did see the long-awaited return of the original secretary Kotori Otonashi, who assisted the new secretary, Misaki Aoba, in retrieving the sheet music. That sheet music, in turn, added the song Machiuke Prince – one of my favorite songs from the original cast.

These were only a couple of the goofs pulled in Japan this year, but these were some of the ones we enjoyed the most. It’s always nice to see the industry have a bit of fun every now and again, which makes me a little more forgiving of the more misleading goofs.