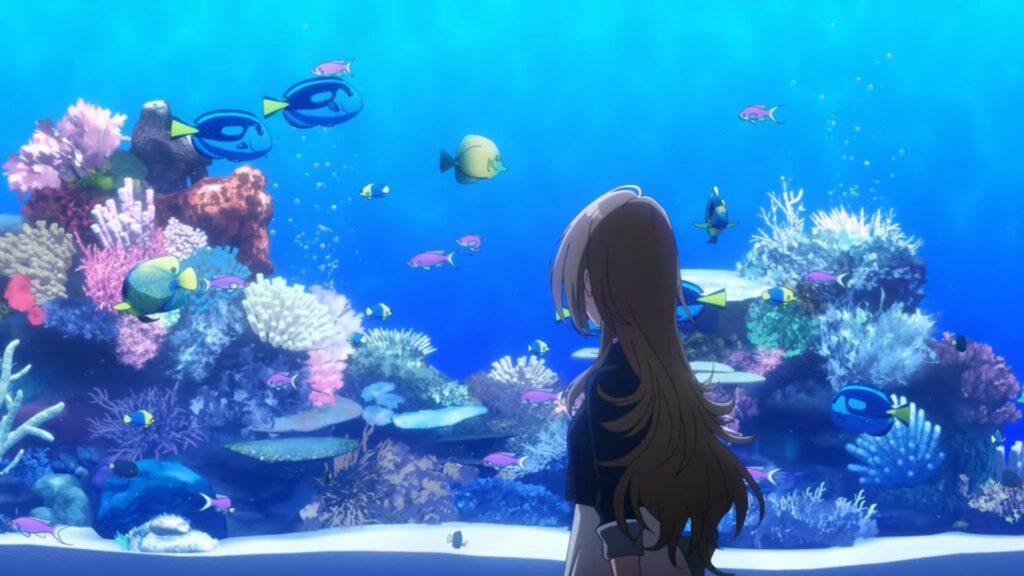 An Okinawa aquarium will be the setting of Aquatope of White Sand, a new anime series which will arrive in July.

The creators released a lot of information about the new series on Tuesday, including a new promo video, key visual, opening and ending themes, and voice actors for some of the characters. There’s a lot to get through, so let’s start with the trailer, which was posted to DMM Pictures on YouTube:

In many ways, Okinawa is Japan’s equivalent to Hawaii. When it shows up in an anime series, it’s often the vacation or beach episode.

However, here we have something a bit different. As you can see from the video, it will still have the lovely tropical scenery, and the aquarium adds some neat aquatic visuals as well.

But we also have a more serious story. The main characters are a pair of young women. Schoolgirl Kukuru Misakino (voiced by Miku Ito) works at Gama Gama Aquarium, where ‘mysterious things’ can sometimes be seen. She meets Fuuka Miyazawa (Rikako Aida), who has run away from her dreams of becoming an idol in Tokyo. Naturally, these two will become friends, and deal with stuff together. On top of that, the aquarium faces the possibility of closing. And there are those ‘mysterious things’ which the girls will undoubtedly investigate.

The main two characters were introduced in January. On Tuesday, they added two more: Tsukimi Teruya (Azumi Waki) and Karin Kudaka (Lynn). Tsukimi is a good friend of Kukuru’s, with the nickname ‘Udon-chan.’ She helps at her mother’s restaurant. Karin is the ‘older sister’ type, who works for the tourist association.

The opening theme song will be ‘Tayutae, Nana-iro’ (Sway, Seven Colors) by ARCANA PROJECT. The ending theme will be ‘Tsukiumi no Yurikago’ (Moon Ocean’s Cradle) by Mia REGINA. P.A. Works will produce the animation. Toshiya Shinohara will direct.

Aquatope of White Sand is not based on a manga or light novel series, but will be an original anime project.