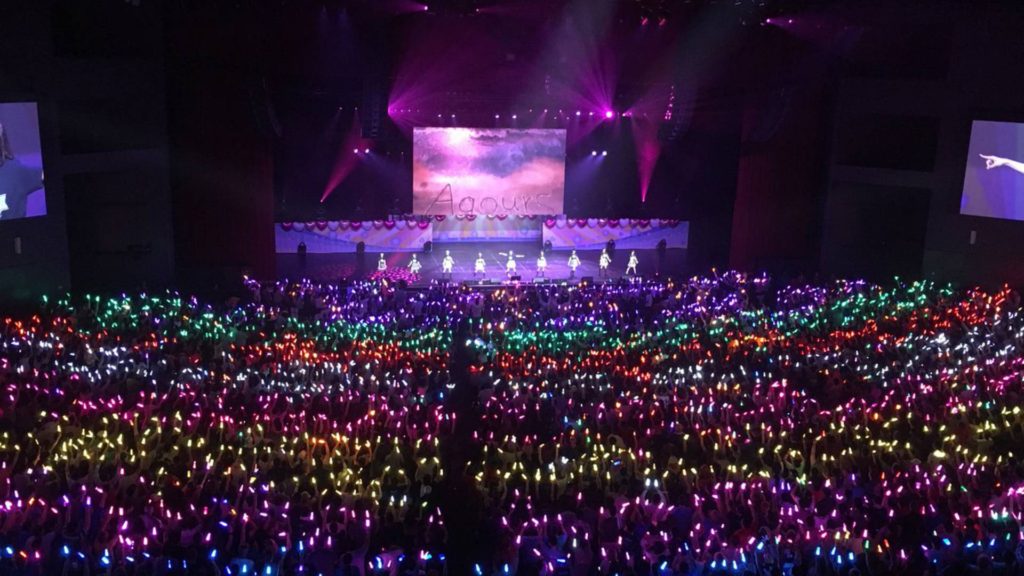 For a long time, it seemed like having a virtual idol concert outside of Japan was merely a pipe dream – after all, there was a whole world between it and the fans. But Anime Expo has proven consistently that lives can be a success overseas, and the welcome that the members of Aqours from the Love Live! franchise received at this year’s AX showcases the dazzling potential that these lives could have.

The members of Aqours were welcomed by a huge crowd of enthusiastic overseas fans this weekend at the Microsoft Theatre. Much like their Japanese counterparts, they came armed with penlights and happis, showing their dedication and love for the franchise. But they didn’t just come with enthusiasm. They came with a plan – to wow the performers with a rainbow of penlights. In precise timing with the song, fans would change the color of their penlights and raise them to create a rainbow that stretched all the way to the very back of the venue. It was truly a sight to be sold, and the performers were moved to tears.

【World Love Live! in LA】Thank you for coming to "LOVELIVE! SUNSHINE!! Aqours World Love Live! in LA ~Beyond the Pacific~" today! We got such a surprise today from you all!! We look forward to returning to America again!! Thank you so much! Do your Rubesty!! #lovelive pic.twitter.com/HJGxpEt210

Such a sight didn’t come from nothing, however, it was thanks to months of hard work and dedication by the team over at the Aqourainbow Project. Leading up to AX they tirelessly worked to raise awareness about the plan, producing a very detailed video about how the rainbow would work in the Microsoft Theatre and even handing out flyers to raise awareness about the plan outside the venue on the day of the live itself. Seeing their hard work pay off must’ve been a great feeling, and they deserve to be applauded.

Here is the finalized flyer that will be PRINTED on July 4th!
It is ready and edited with disclaimers everyone has to know!

We also want to day this once again…
Thank you all so much for reaching this far.
This is ALL YOU…YOU made this happen.

Further projects surrounding penlight performance at the live included the Yousoroad and Kananrail Project, which while unfortunately didn’t gain as much traction as the Aqourainbow Project and therefore didn’t happen (Editor’s Note: We have received word that the reason for the additional projects not coming to fruition was actually due to the songs Koi ni Naritai Aquarium and Happy Party Train not being performed. We had our information skewed and meant no disrespect to the fans who worked tirelessly to orchestrate these additional tributes.) , showcased a similar level of dedication and love for the franchise.

We are excited to share the official #AXYousoRail flyer! We will be handing these out before the live @AnimeExpo with distribution details to be shared later. A huge thank you to the whole team for working hard to make this happen! #Yousoroad #Kananrail pic.twitter.com/zvr2LLfiWd

And that’s what this live should be telling those who organize them – they can and do work overseas. Overseas fans are just as passionate, just as engaged, and just as willing a customer as a Japanese fan. In fact, the number of obstacles overseas fans have to climb over are more numerous, making them often even more engaged with the franchise – not only the language barrier but also sheer distance, with many Love Live! fans traveling across the country to be in with a chance to see Aquors. Multiple city dates in the US wouldn’t be unprofitable, nor would the welcome be lukewarm. It would be as warm as they get back home.

Even Japanese fans were impressed by the enthusiasm and passion of overseas fans, with some exclaiming “They really did a rainbow” and others commenting “The organization of overseas fans is really amazing!”. Furthermore, it seems like the idea for the rainbow is spreading to Japan, with attendees of the Fukuoka live taking place this weekend attempting to organise a repeat of the AX spectacle. It’s worth noting that a fair number of the Fukuoka attendees are actually overseas fans, many of whom choose to enter the ticket lottery for the Fukuoka live because there is a higher chance of winning, but pulling off the rainbow in Fukuoka will definitely inspire Japanese fans to do the same as well.

Fans are cooperating and showing their passion in other ways as well. UK-based group Aqours Tea Party are currently lobbying to get a delayed live viewing organised in the UK, the success of which could spell a new dawn for lives in the west. But as it stands, overseas fans have clearly demonstrated their passion and willingness to support lives overseas. What remains to be seen is if that passion will be rewarded. Aqours Tea Party is currently running a general interest survey in a delayed live viewing. You don’t have to be a UK resident to fill it out, so please show your support if that’s something you’d like to see become a reality.