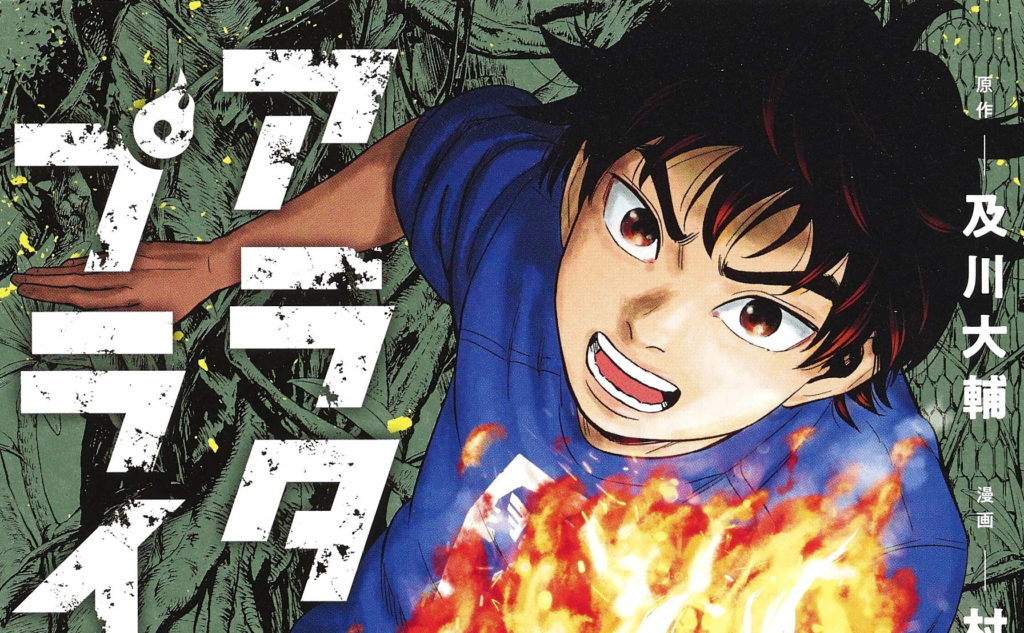 Arata Primal: The New Primitive first popped up on my radar back in May, almost seven months ago, when Comic Natalie carried out an interview between its artist-writer duo Katsutoshi Murase (of Karada Sagashi fame) and Daisuke Oikawa alongside the Dr. STONE writer, Riichiro Inagaki.

Clearly, there was some attempt on Shueisha’s part to get fans of its super-popular Weekly Shonen Jump series to, well, jump on one of their latest Manga Plus series. And while I translated large portions of that interview with more of an eye to Dr. STONE’s conception and development, my interest was piqued: could Arata Primal really scratch my science-fiction itch in the same way?

Unfortunately, that was not to be the case. This is because while there are many similarities between Arata Primal and Dr. STONE – an apocalyptic event sending humanity back to the past, the need for survival knowledge, etc. etc. – they are not comparable in terms of quality. In fact, Arata Primal fails in many of the ways that Dr. STONE precisely succeeded.

Hence why Arata Primal’s failings on character are so important. This all starts with our protagonist, Arata Minamoto. 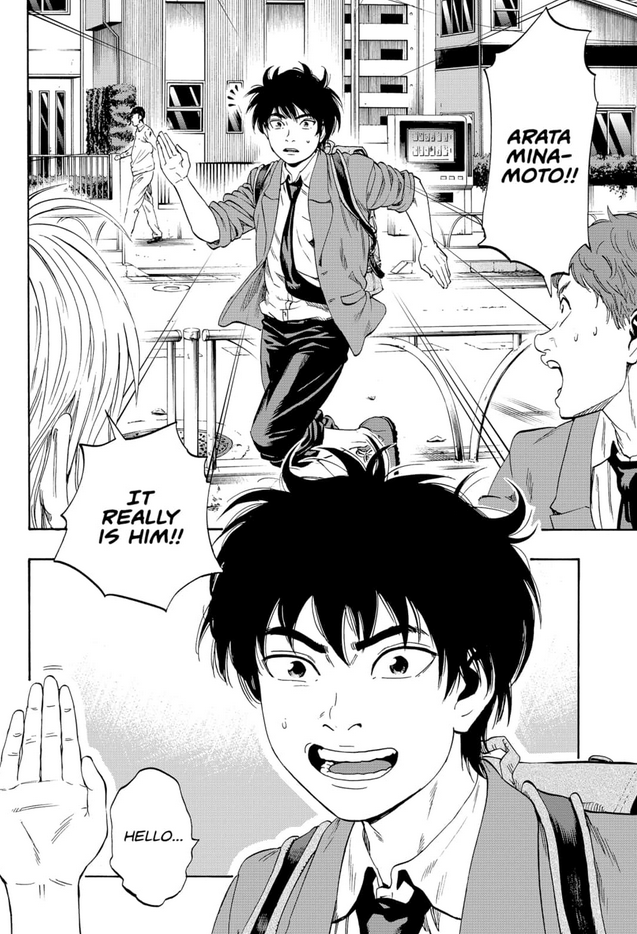 Simply put, Arata is unlikeable in every sense of the word. His personality is abrasive, callous and insensitive to the needs or moods of others. In his desperate attempts to form social connections after a childhood spent away from the rest of society and incompatible with it due to his EMP affliction that affects all electronic devices that come anywhere near him (don’t ask), he ends up pushing people away even further – including the reader.

Arata is a far cry from Dr. STONE’s lead, Senku. While I wouldn’t exactly call Senku polite or conscientious – he is often as rude as Arata in certain circumstances – he makes up for this fact in pure magnetism, drawing the reader and other characters towards him by force of his sheer personality in a way that is very hard to quantify.

In this sense, Arata is in every part unengaging and uninteresting as he is rude. He’s simply not a character that I enjoyed watching act and react in the fictional world of Arata Primal, even when he becomes slightly more agreeable in the series’ later half when his survival skills really come to play and his personality changes, becoming more mature in the process. 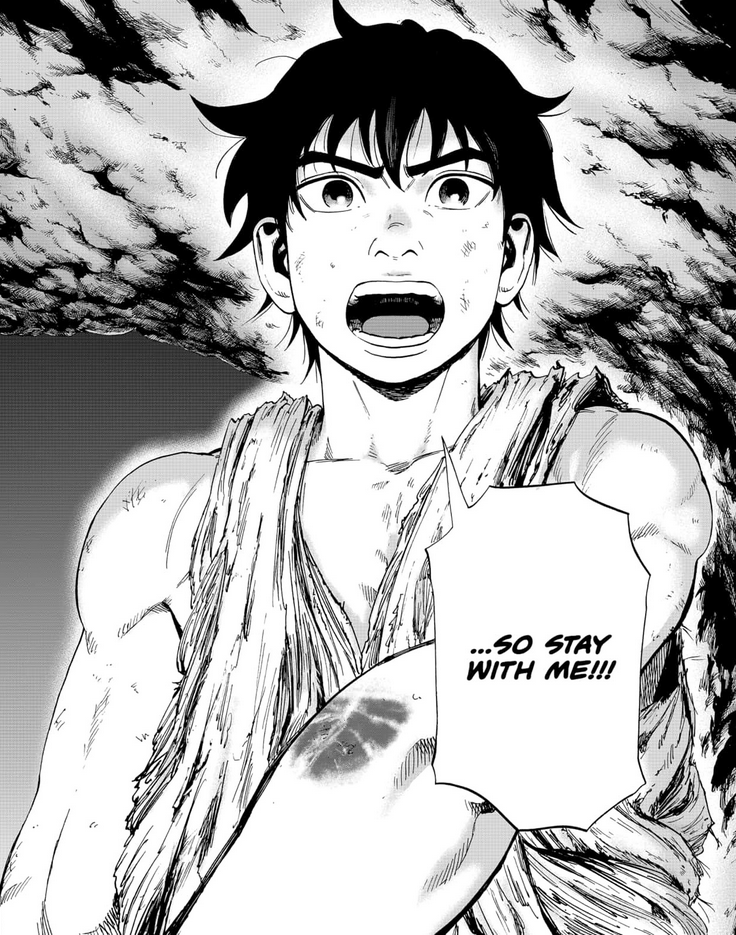 This is a fact that extends to the rest of the cast of the series. None of them are particularly interesting or noteworthy, being mostly defined by a single trait or personality quirk: we have the JSDF soldier man, the popular teenage boy, and the sensitive girl (who also has a monkey for some reason). And those are just the main trio who follow Arata on his adventures – there are a whole host of other characters in the series that passed out my mind almost as quickly as they entered it.

Compare this, again, to Dr. STONE’s larger cast of characters. Arata Primal has no magnetic personalities like the fearsome Tsukasa, the two-faced Gen, or the morally questionable Ryusui. It has no-one that captures the imagination or the heart – and definitely no-one strong enough to carry a spin-off series.

Most of these failings fall on the shoulders of the author of the series, Daisuke Oikawa. Now, we do have to cut him just a little bit of slack given that this is, as far as I can tell, his first series as a professional writer. Even so, a bit of criticism will probably do him some good.

Yet the artist for the series, Katsutoshi Murase, should also shoulder at least some of the blame. To put it simply, his character designs are quite ugly: Arata’s face is wide-set and goofy, hardly becoming of a main character, and Arata’s father would also be a candidate for probably one of the ugliest characters I’ve ever seen in a shonen series. 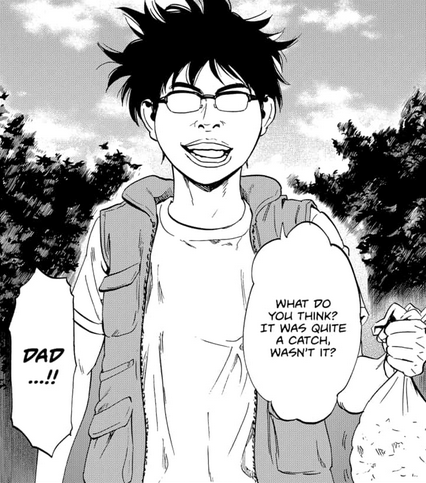 None of this should matter, at least in theory, if the characters are written well. But given that they are not, their ugliness only comes to serve as a reflection of the ugliness of their personalities and ends up taking away from the more effective aspects of Murase’s art, namely in monster and background design.

To bring it back to Dr. STONE, Boichi’s character designs are not traditionally attractive – they are over-exaggerated and even surreal, at times – but they are unique and immediately eye-catching. They also always betray the personality of the character in question, which author Riichiro Inagaki always skillfully crafts. Here, we see the importance of synergy between an artist-writer duo brought sharply into focus.

Story and Setting: Digging Your Own Grave

I will now attempt, very briefly, to explain the basic premise of Arata Primal. The story takes place in the near future, where a solar flare is set to cause a global blackout that will make the usage of electricity, water, and gas all but impossible – essentially bringing the entirety of the modern world to a screeching halt. 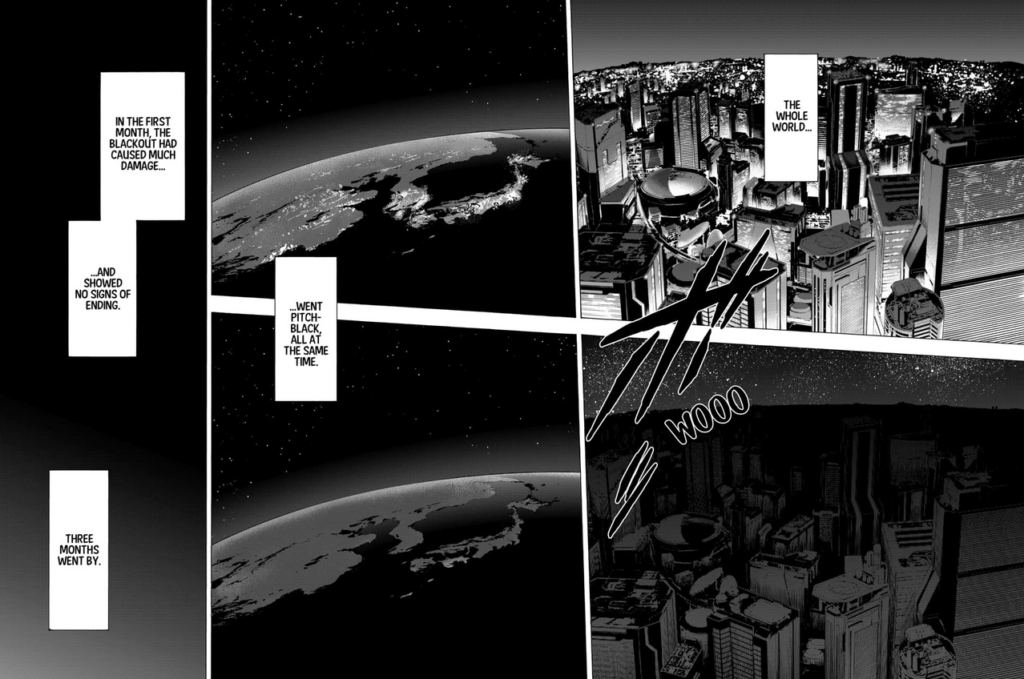 Yet the effects of this event turn out to be much more catastrophic. Far from being a temporary affair, this solar flare ends up having more far-reaching consequences and brings forth a permanent blackout on a world scale. But the public is not made aware of this, with only those in power knowing the full scale of the effects beforehand.

We only know this fact thanks to the work of Arata’s father, who has become embroiled in some sort of conspiracy left behind by Arata’s mother, Hasumi. To cut a long story short, there’s some kind of mysterious briefcase that ends up getting shot at by a mysterious enemy from Arata’s father’s past, and everyone is sent back 40,000 years to the primeval era. 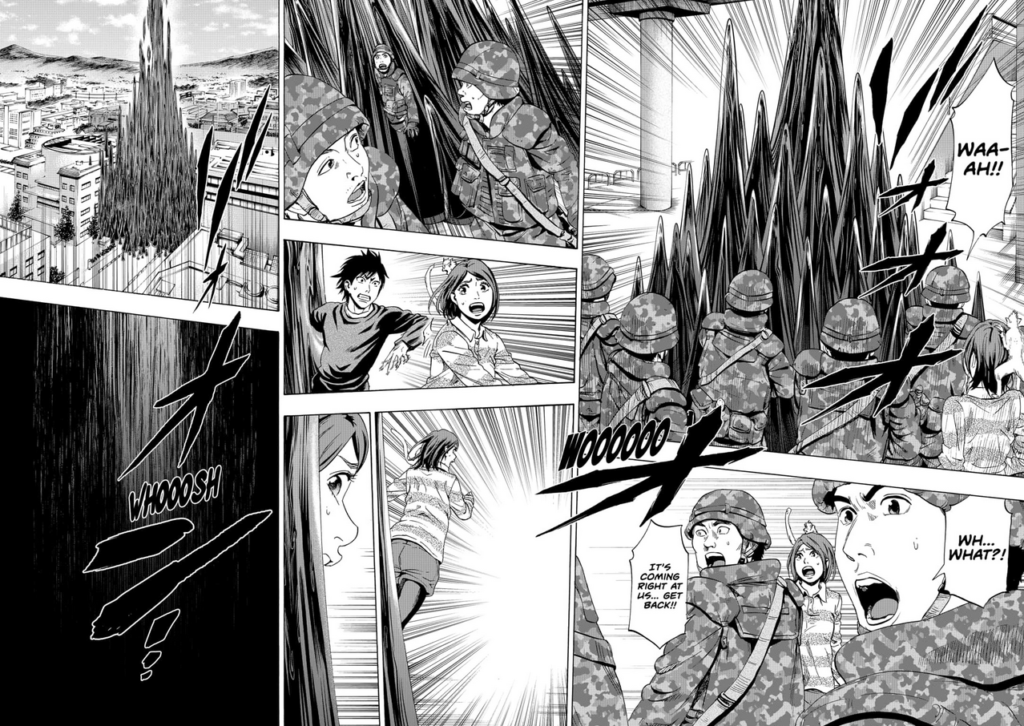 There are so many layers to this story that it is hard to unpack them all. Herein lies the essential problem of Arata Primal’s story: author Daisuke Oikawa has attempted to pack in too many narrative elements – worldwide conspiracy, apocalyptic events, survival adventure – that the reader is at once overwhelmed by the sheer amount of story and underwhelmed by the fact that none of it is explored in sufficient depth.

Critics of Dr. STONE have made a similar argument in terms of that series’ story, and while it is true that the series’ initial arc is not the strongest, in terms of simplicity it is a far cry from Arata Primal. Summing up Dr. STONE in a phrase is easy – humanity is petrified and Senku wakes up thousands of years later, tasked with rebuilding humanity – whereas doing the same for Arata Primal would probably take me all day. 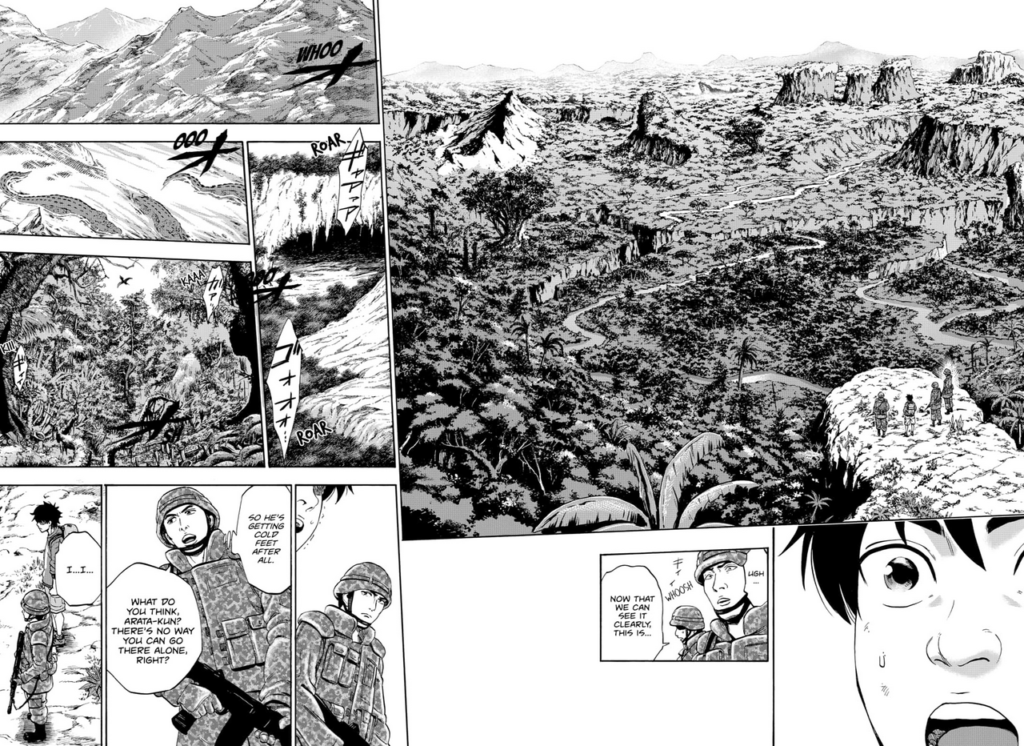 This is a shame because it is when the series sets off on its grand, primeval adventure from point A to point B that things really start to pick up. Characters are slimmed down to a trio (plus Arata), narrative goals are more clearly defined, and we even get some more recognizable antagonists – a mysterious figure from Arata’s past, but also some primitive humans. 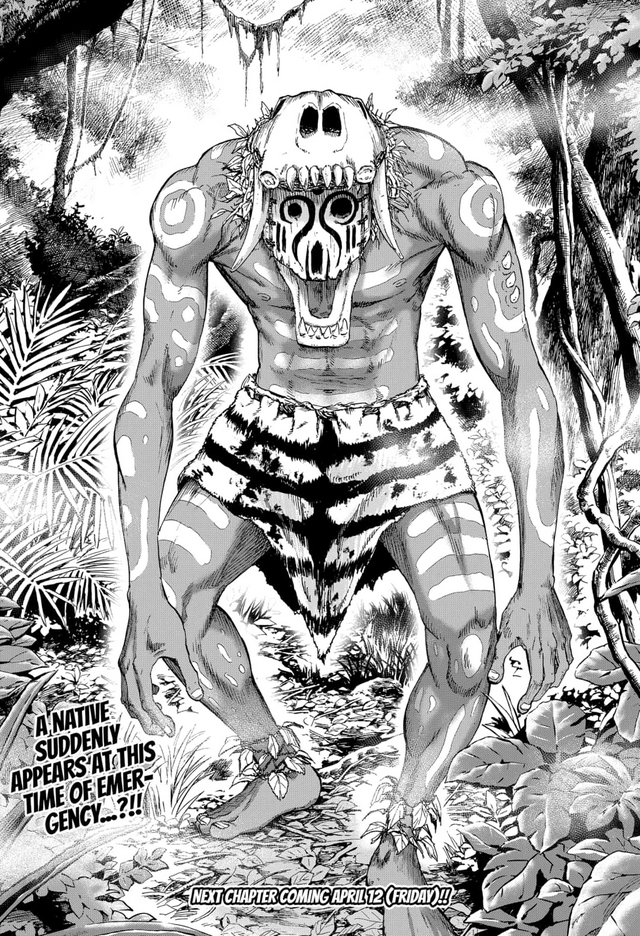 But by this point, most readers are probably already checked out – that is, if they carried on reading at all. I’ll be honest and say that if it wasn’t for my curiosity about this series’ relation to Dr. STONE, I would’ve dropped the story around the seven-chapter mark. Hence why first impressions are often so important.

Given all of this, it’s not hard to see why Arata Primal came to an end just the other month. You’d be forgiven for thinking that this was planned, considering how the series starts with its end and ends with its start, but the rapid-fire way in which the narrative wraps up – launching answers at the readers in clumsy exposition dumps that lack any and all impact – seems to suggest otherwise.

Comparing Arata Primal to Dr. STONE is an insult to the hard work of Riichiro Inagaki and Boichi, who have crafted a survival adventure series that stands as a testament to the genre and has, clearly, already begun to spawn many imitators. 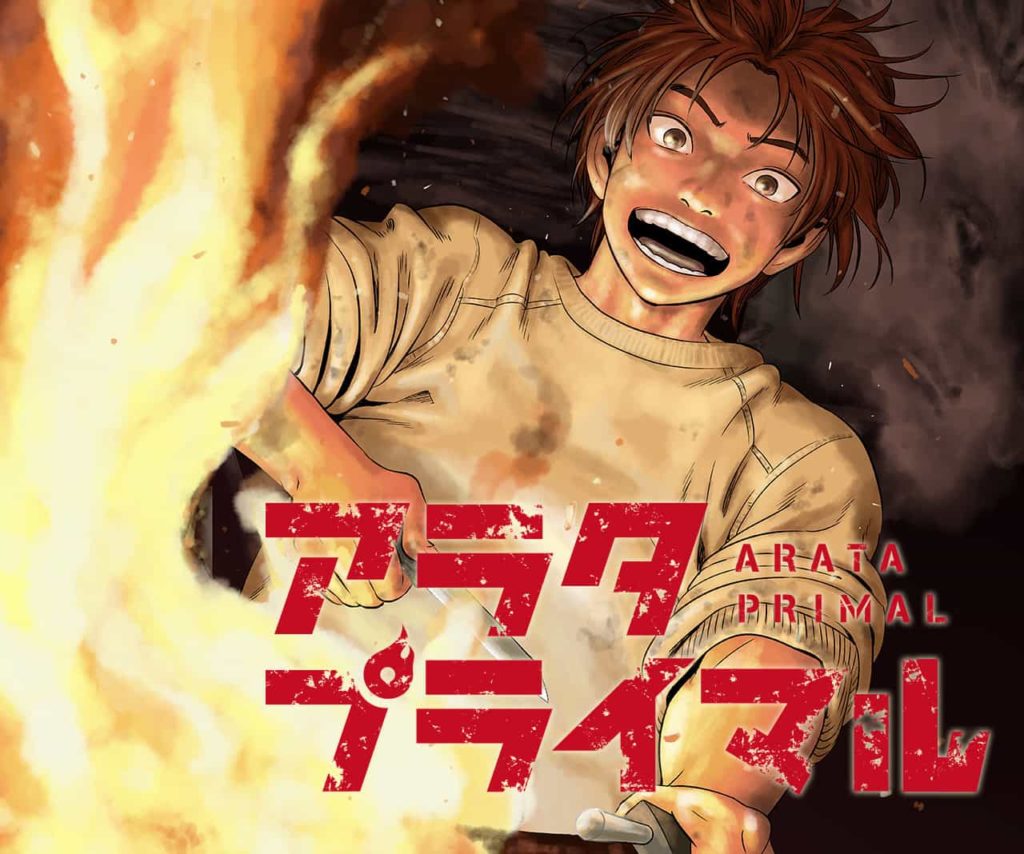 Was drawing a parallel between the two series more of a marketing ploy than a genuine indication of quality on Shueisha’s part? Most likely. But I cannot imagine that I am only Dr. STONE fan who was duped into reading Arata Primal as a result of that interview. And to those who joined me in this endeavor, I offer my apologies.

At the very least, Arata Primal: The New Primitive is available to read in English for free via Manga Plus.