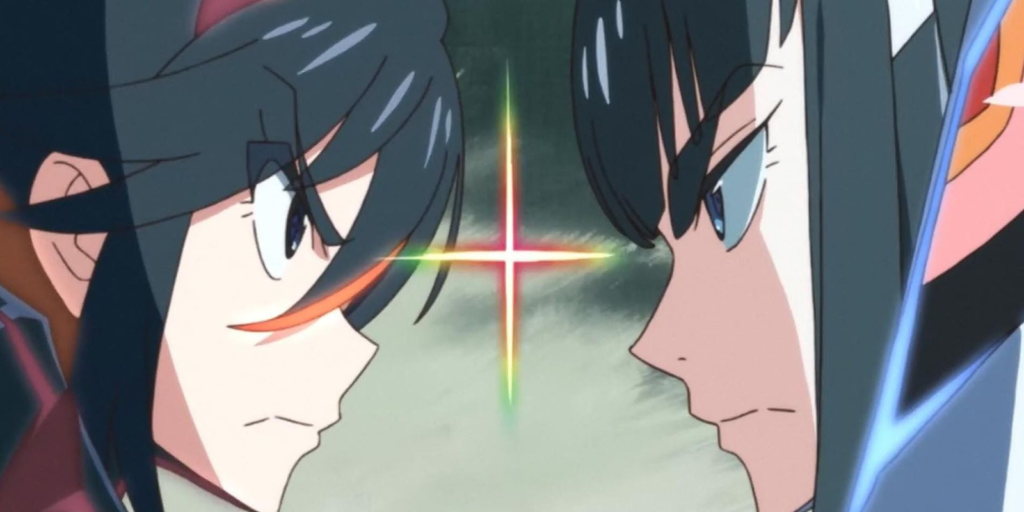 Trigger’s sleeper hit Kill la Kill took a lot of anime fans by surprise upon debut in 2013-2014, its outlandish designs and silly premise giving way to an unrelenting rollercoaster of a story. I dare say it changed the way some viewers consume fanservice and original works to this day.

The series, like protagonist Ryuko Matoi’s Kamui-partner Senketsu, has layers. What opens as a revenge tale typical of shounen steps up to the plate by the end of its first episode with action and well-written wit.

And clothes, lots and lots of battle armor and school uniforms.

And if clothes are what make a man, then Sushio, the artist behind Kill la Kill, is truly the man.

Ishikazi got his start working as an animator for Gainax’s Neon Genesis Evangelion (1995) and later took on various roles during the production of Gurren Lagann (2007), the latter providing him with an in once Gainax “successor” Studio Trigger came to be.

Ishikazi’s character designs for Kill la Kill were what ultimately cemented him and his style in the anime world, their dynamism coming through even without movement. While a character’s hairstyle and wardrobe, or there lack of, being integral to design as a whole seems rather obvious, I think we take the basics for granted.

On the other hand, Sushio has mastered the art of both deconstructing tropes and playing them straight, providing compelling storytelling with each and every oddball hero and villain.

The No-Stars of Kill la Kill 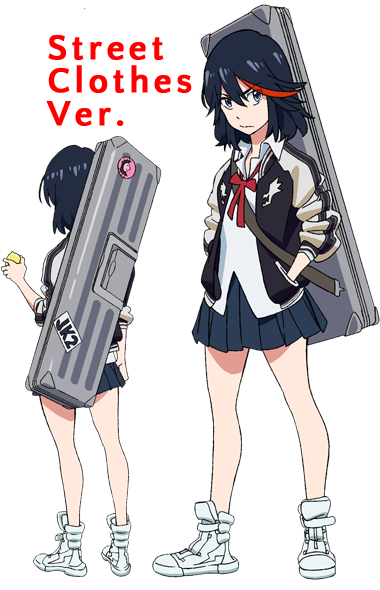 It’s not every day that we get a fiery female protagonist in a “shounen” series, not to mention one who takes charge the way Ryuko does.

Ryuko makes an entrance with a red streak in hair and scissor-blade in hand, everything about her screaming delinquent and rebellious teenager. Even then, the rest of her ensemble is made up of what appears to be a female school uniform. I’ve always seen this discrepancy between her attitude and morals (or at the very least, her regard and understanding of the rules as they stand at the classist Honnōji Academy) as deliberate, especially when her outfit morphs into its Senketsu version. 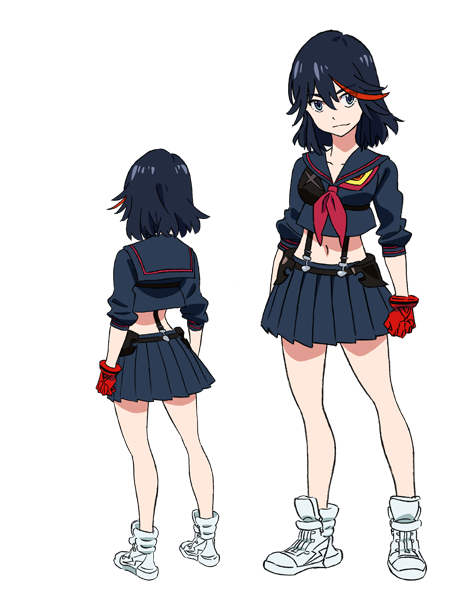 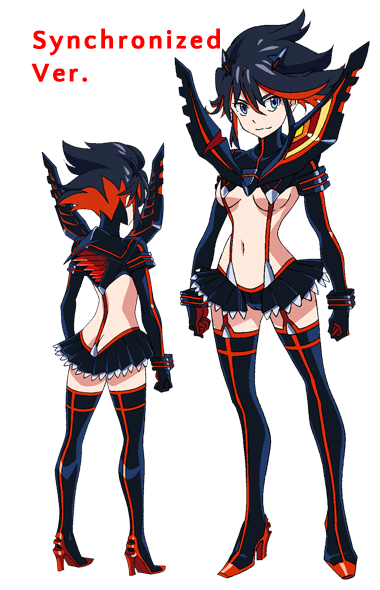 Ryuko strikes a constant balance between chaos and order in a clever deconstruction of magical girls and magical girl transformations. The moment she fuses with living kamui Senketsu, her street clothes “shrink” into a midriff-baring shirt and skirt combo, further selling her troublemaker shtick by twisting the one “proper” element of her design. This transition also does well to hint at her synchronized uniform.

When Ryuko fully transforms for the first time, she takes on a hypersexual, mechanized look, to her own indignation. While there is a narrative reason as to why this is the case, which is often better than throwing senseless sexiness in viewers’ faces, I think her exposure says quite a bit about fanservice in general.

Sushio is not coy about making characters sexy.

Sure, being meta or self-aware doesn’t necessarily excuse a poor aesthetic or make something profound, but when done right, it can communicate theme in an effective way.

Remember when I mentioned magical girls? Our protagonist’s red streak covers more of her head than normal post-synchronization, shoujo style.

The fact that Ryuko is forced to fight in heels and nonexistent armor also speaks to both shoujo and shounen (mecha in particular) themes of adolescence and vulnerability. As tough as she is, Ryuko is still a child, a young woman. Being an orphan, she has little choice but to rely on her own resolve and strength as symbolized by her “armor.” 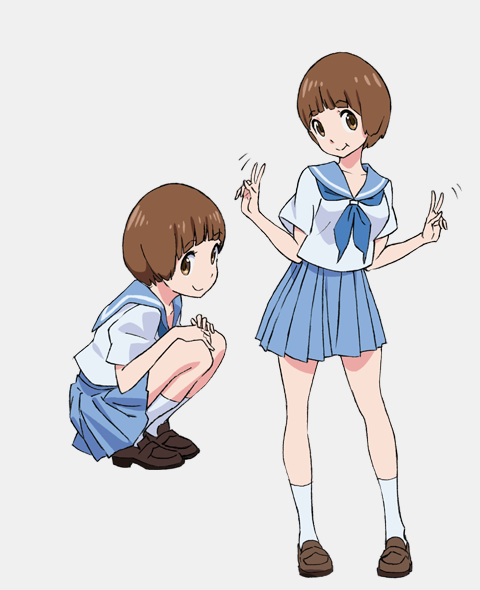 Ryuko’s self-proclaimed best friend Mako and her family may not stand out in comparison to the rest of the cast, but that, like Kill la Kill’s fanservice, has a point.

To a degree, they do stand out in their normality and normal people quirks.

Mako is designed with a brown bob-bowl cut, brown eyes, and no-star uniform so as to frame her as a cog in the machine that is Honnōji Academy, simply part of the crowd. This design choice is somewhat of a mixed bag considering plain looks are often given to a “best friend” character; at the same time, “being plain” is a staple in otome anime and visual novels.

Sushio drew Mako cute and uncomplicated for the sake of story and keeping the spotlight on Ryuko, the excitable girl’s large eyes being the one thing distinguishing her from other no-star students. When the otome sub-genre does this, it’s to create avatars and/or player characters upon which players and viewers can project themselves. In a way, Mako acts as our avatar, our entry into the world of Kill la Kill as a native of Tokyo Bay who shows Ryuko the ropes.

Mako’s alternate look as “Fight Club Mako,” the hot-blooded persona she dons as acting president of said club, is chock full of visual cues that provide her with more synergy with Ryuko. The pair’s strength, however, lies in their differences. While Mako exudes cartoonish power as President of the Fight Club, the harsh red lines and spikes of her coat threaten to overshadow her softer features. She manages to give off fun, ridiculous vibes, but vibes that are not quite her. 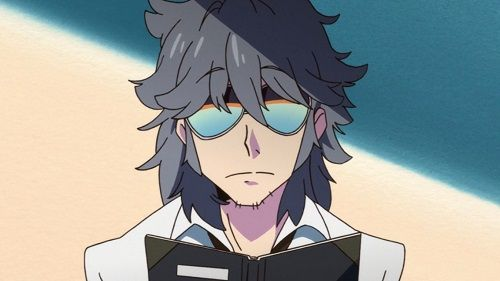 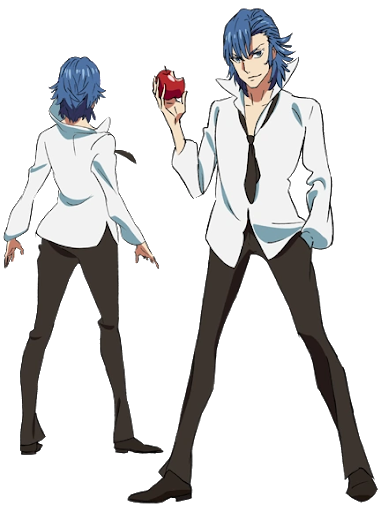 I read a while ago that Ryuko and Mako’s homeroom teacher Aikuro was designed to resemble the quintessential unassuming, unattractive teacher, but if that’s the case, his design failed horribly with this writer.

The man’s blue mop of hair, shades, and loose outfit come together (only to fall apart later) as a charming “surfer” ensemble. This get-up is revealed to be a cover for his near-nude revolutionary true self. In terms of physical contrast, the dreamy teacher’s “transformation” is pretty well executed as he pushes his hair back to show his face.

As for the rest of his design…I don’t know what else to add.

Thanks, Sushio? The man’s easy on the eyes.