The realization that kumattaojisan creates his art with something as quaint as cotton swabs was an aha moment. Scrolling through his Twitter feed, I was struck with a lightning bolt of complete conceit: ‘cotton swabs? Hell, I could do that!’ There’s something instantly effortless about his pop-culture creations, something that strikes you in the same way seeing a completed puzzle or Lego kit does… they make you want to assemble something of your own! What would you do? Dye each swab a different color and assemble them, right? Easy.

After watching him create Demon Slayer’s Nezuko from 6,462 individual swabs, I was forced to reassess my assumption of what ‘easy’ means when it comes to this unusual medium. The amount of work that goes into one piece is staggering, and it seemed that the secret to blending each paint together to find the perfect shade and finding the most efficient way to assemble these sculptures must have taken years of trial-and-error. Again, I was largely incorrect: he only began doing cotton swab art in February 2020.

After mixing particular shades together and adding water, he tests the color on a tissue, doing so for fourteen different colors needed for this particular piece. After dyeing comes planning, measuring, gluing the appropriate swabs together to get them ready to stack. That’s the secret: these cotton swab works aren’t made stick by stick, but line by line, in a process I can scarcely understand how to accomplish with this amount of accuracy. Everything kumattaojisan does belongs in a ‘most satisfying’ compilation.

It’s hard not to feel a kinship to him after reading his blunt Twitter bio, in which he shares: ‘all I do everyday is go back and forth between home and work.’ He claims to live a minimalist life, and expresses a love for niche works. Having reached 1,000 followers on YouTube towards the end of 2020, there’s staunch appreciation he shows in every post, thrilled that his works are continuing to reach more and more people worldwide. 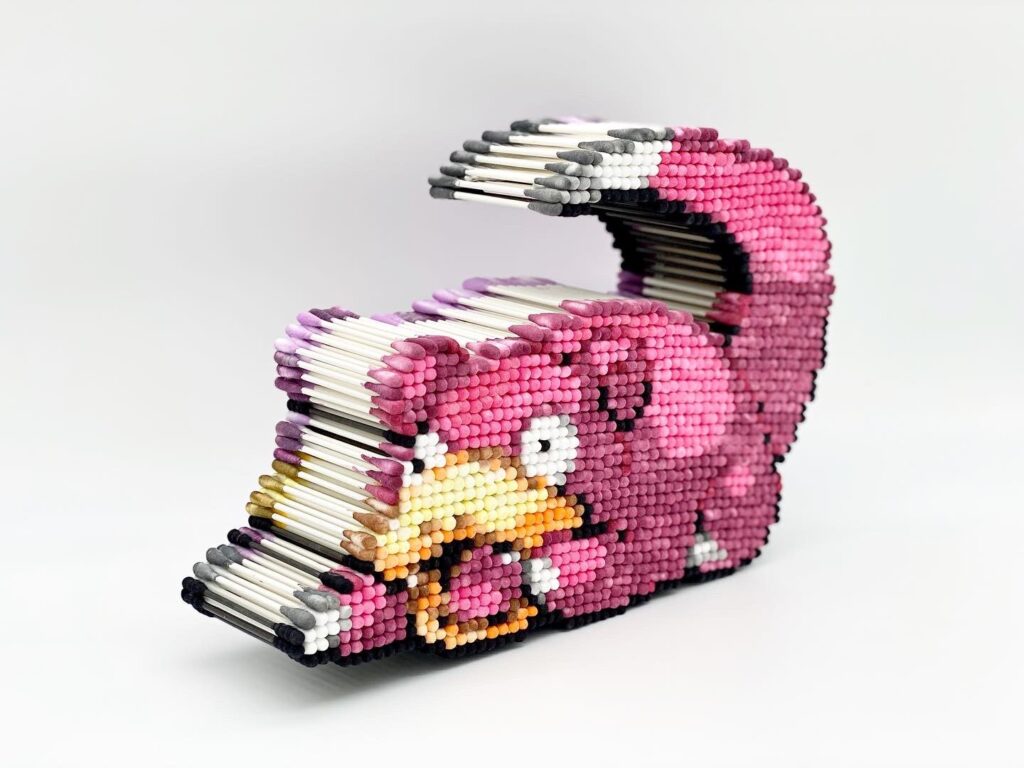 Much like last week’s featured artist WHIP SUGAR, kumattaojisan also has a clear affinity for Pokemon, and mentions the icing artist often on his Twitter and in video descriptions. Both are members of a small but passionate group called only ‘The Pokemon Modeling Arts Committee.’ Each artist in the group utilizes their own preferred method of craftsmanship to bring their favorite Pocket Monsters to life, and each artist clearly belongs in our Artist Spotlight segment!

In the early days of the Animal Crossing: New Horizons craze, kumattaojisan sculpted some of the series most popular villagers (yes, including Raymond) and continues to create culturally timely works, most recently posting his interpretation of Demon Slayer‘s Rengoku.

I feel a wild appreciation for anyone who takes the time to put something out into the world, instead of simply consuming and moving on. Pop culture can pull great things out of us, if we’re willing to put in the work and not shy away from bold creativity. And this artist is no stranger to hard work.