Assassination Classroom: Sci-Fi Comedy with a Splash of Heart 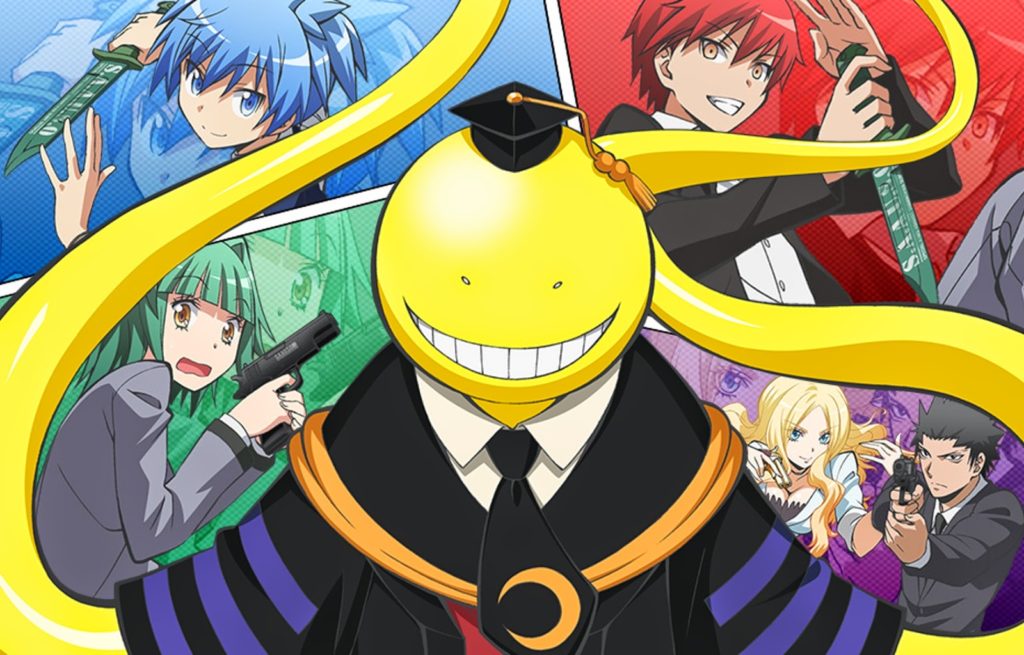 Assassination Classroom throws us into a somewhat dystopian academic setting. We are introduced to the infamous 3-E class, also known as the End Class of Kunugigaoka Junior High – students whose abysmal academic performance has earned them placement in a class required to attend school in a separate building sequestered in the mountains far away from the main building.

One day, 3-E-class receives a visit from the Japanese government, who has come to enlist their help in defeating a new threat. The government tells the students that they have a certain amount of time before a superpowered creature destroys the earth, and has already destroyed 70% of the moon.

The only twist is that this powerful, nigh-indestructible creature is their new teacher – a giant goofy-looking balloon animal-like octopus creature with long tentacles. He tells the class that he will destroy the earth in a year unless he’s defeated.

The students are then given a deal – whoever can successfully kill the teacher creature will be rewarded 10 billion yen (or around $100 million USD). Thus the class receives their mission – come out on top as the one to defeat the threat to humanity and get the money all before the year is up.

Luckily for them, their new teacher is also a highly trained assassin, and murder has been added to the curriculum! Thus, they receive government-sanctioned training as professional assassins in addition to their usual school lessons. Not bad for a new semester.

Of course, he only has super-speed (up to Mach 20), hyper-regenerative abilities, the ability to fly, clone, and make himself nigh-invincible, so that’s a bit of a snag. To make matters worse, he turns out to be an excellent teacher.

Korosensei’s dedication to his students juxtaposed against the deadly serious and time-sensitive mission his beloved students have been forced to take up drives the central conflict of the story – as he grows closer to the students, succeeding in boosting their academic skills and morale, how can they possibly kill him?

The teacher-creature proves to be quite a mysterious character himself – he does not volunteer an actual name, just telling students to call him whatever they like.

They eventually settle on Korosensei, a combination of the Japanese words for unkillable (korosenai) and teacher (sensei). He is very dedicated to his job, getting to know the strengths and weaknesses of each of his students and tutoring them accordingly using his cloning and super-speed abilities.

He’s insistent that students both do their best to successfully take him out while also learning and growing personally as well as academically. Why’s he so invested? Because he has a promise to keep to someone.

While all 28 of the students in the class receive at least some partial spotlight during the course of the series (and have impressively distinct character designs), the story centers primarily on a boy named Nagisa Shiota, who is so used to enduring verbal and emotional abuse from his mother at home that he has developed a secret talent for shrinking his aura and sneaking around as unnoticed as possible.

His classmates initially exploit this to their advantage in an assassination attempt against the Korosensei, who becomes enraged not at the attempt itself (which he praises as very clever), but at their exploitation of Nagisa. Korosensei immediately recognizes Nagisa’s cunning abilities and tells him that he should value himself more, especially for his talents and stealth.

Nagisa absorbs this and begins to document all the weaknesses and characteristics of their teacher in a notebook in an effort to find a way to defeat him.

The story also focuses on Karma Akabane, a sharp-eyed foil to Nagisa, whose vengeful attitude toward the academic system fuels his bloodlust and leaves him with few qualms with immediately trying to take our Korosensei as soon as he arrives on screen. There’s also Kaede, Nagisa’s close highly intelligent and adaptable friend who may be hiding a few secrets of her own.

There’s also an AI student added to the cast, whose character development we see as she learns how to not shoot tons of anti-sensei pellets during class and learns to be more strategic.

Elite Air Force Soldier Tadaomi Karasuma takes up the mantle as P.E. teacher to Class 3-E, passing on his military training in stealth, weaponry, and hand-to-hand combat to help them become top-tier assassins.

He’s soon joined by Irina Jelavić, a young, beautiful blonde assassin whose abrasive personality initially earns her the nickname “Bitch-sensei” among the students before she learns to get along with them. Her specialties lie in languages, infiltration, martial arts, weaponry, and seduction.

These two initially butt heads initially but eventually start drawing together romantically, and the students are not shy about wanting them to be together.

Character development is one of the main draws of the series and the reason for its popularity in what’s otherwise a serious but goofy premise. You genuinely see the Korosensei’s love for his students, and he’s not hesitant to give tough love where necessary, and you see the students begin to improve not just the grades, but their confidence in their assassination-related skills as well.

Season 1 focuses primarily on Nagisa and the rest of Class 3-E contending with and eventually overcoming their weaknesses and limiting self-beliefs.

Due to being shunted off to some other part of the school, Class 3-E has understandably collectively given up on themselves, resigning to the belief they’ll be losers forever. It doesn’t help that everyone, including the staff, down at the main building treats them like garbage due to their lowest-of-the-low academic status.

Enter Korosensei and his almost manic dedication to improving the spirits of his students alongside their grades. As Nagisa notes at one point, unlike the rest of the world, Korosensei really sees his students and not only meets them where they are but wants to push them to be the best they can be. Although zipping off to America to get a feel – literally – for how a baseball player achieves his stellar pitches might be a little extreme when helping your pupil improve his own pitching skills.

Season 1 also introduces a wide array of antagonist characters, such as Principal Asano, an ultra-strict, manipulative, authoritarian foil to Korosensei who demands school-wide academic excellence at all costs, but has a hidden side, and his son Gakushu, who shows the same ambition to not only dominate Class 3-E but his father as well.

Season 1 also has one of the most badass test-taking scenes I’ve ever depicted on the screen in an anime. It comes very close to rivaling Light eating chips while taking lives and names in the Death Note.

In Assassination Classroom season 2, the stakes raise just a little bit higher, as more enemies from inside and outside the school come to test the children’s abilities and dedication.

The students’ bond with Korosensei grows, though the focus changes more from the kids being effective assassins to them not letting their powers and knowledge get out of hand, especially after a hubristic display of their new parkour abilities results in someone getting hurt.

More of Korosensei’s secrets and past come to light as the deadline approaches and assassins seek him out for the bounty, the sake of humanity, or simply their own glory. One of the children proves to have been after the teacher from the very beginning and has been waiting to enact their own brand of revenge.

After hearing the tragic backstory of how the goofy, compassionate octopus-like creature before them used to be a coldblooded, top-tier assassin, Some of the students decide he must be saved. Nagisa and Karma continue to grow stronger as rivals, culminating in a capture the flag type face-off in which both teams come to a crucial choice – whether to kill the teacher or let him live.

Ultimately, in the final showdown between Korosensei and the enemies of his past, he’s laid defeated, surrounded by his students who are given the opportunity they no longer wanted so badly at the beginning of the series – to kill their teacher. Korosensei gives one last roll call, acknowledging each of his students by name in the emotional finale, before succumbing peacefully to the final blow administered by Nagisa

How Can You Watch Assassination Classroom?

There are also two anime movies. Assassination Classroom: 365 Days, which is a recap of the entire anime series told from Nagisa and Karma’s points of view as they revisit Class 3-E seven years in the future. Koro Sensei Quest! is a fun little spin-off with an RPG setting twist, which is also available in a short mini-series you can find on Crunchyroll.

As of now, there do not appear to be concrete plans for a season 3 of Assassination Classroom.

‘F-Ken’ Marks the Bizarre Return of the Enigmatic Yusei Matsui