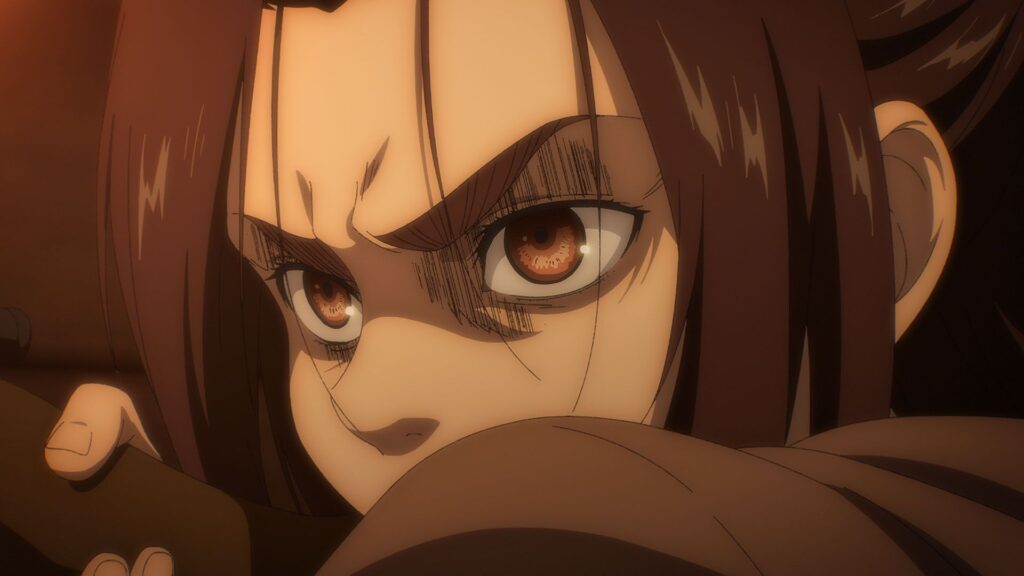 With just one bullet, episode 8 of Attack on Titan: The Final Season made the brewing conflict between the nation of Marley and the island of Paradis that much more real. True, such events as the fall of Shiganshina and the death of Commander Erwin arguably already provided the story with a lot of momentum in its earlier parts, but this time, it’s personal: mainly due to the death of a beloved character.

Contains spoilers for the entirety of Attack on Titan: The Final Season so far.

MAJOR SPOILER AHEAD in…

You have been warned…

It’s hard to quantify the death of Sasha Braun in simple terms. To a certain extent, she was always a bit of a silly character: always thinking with her stomach, providing brevity in a world often dominated by doom and despair. Yet, she’s one of the longest-surviving supporting characters (alongside close friends Jean and Connie) and we’ve come to expect her comedic warmth among the ranks of the Survey Corps. Now that she’s dead, it’s hard to imagine anything being very funny ever again.

Perhaps predictably so, the reaction was swift and complete. In many places, including the US, the words ‘Sasha’ and ‘Gabi’ started trending, alongside the show’s various hashtags. In general, there do appear to be far more people watching weekly than in previous years: the first episode beat out My Hero Academia season three to become the most-watched premiere on MyAnimeList, and the episodes continue to populate top rankings put together by such sites as Anime Trending. For many fans (including myself) this is the first they have felt compelled to stay up to date; as a result, more people than ever are being exposed to the ideas put forward by Hajime Isayama’s story.

Attack on Titan: The Final Season episode 8 not only gives anime-only fans an indication as to why Gabi is so notorious among readers of the original manga, but also provides a graphic illustration of the key question that Isayama is trying to answer in this season and beyond: when does the cycle of violence stop? 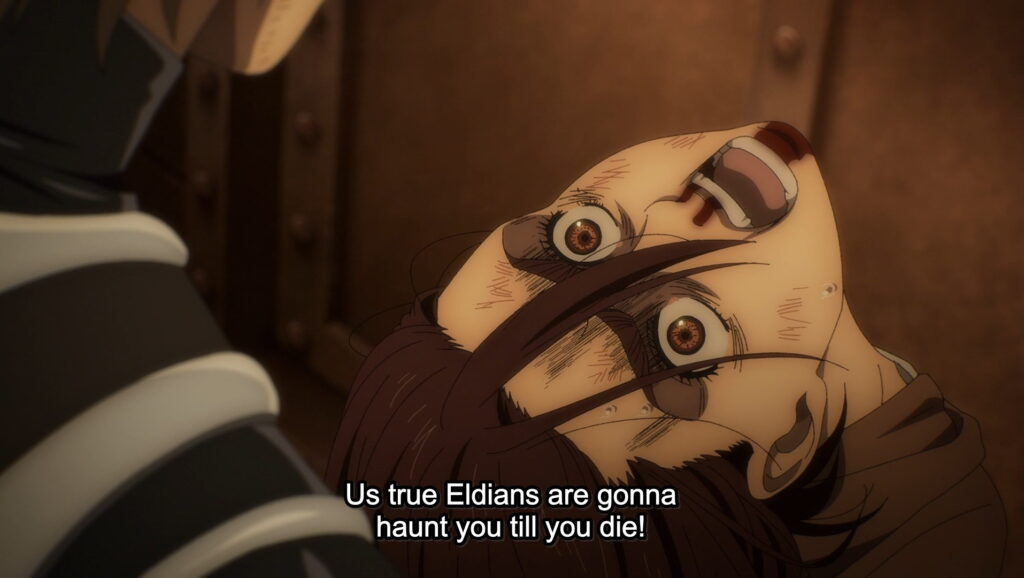 Gabi is not just a Marleyian fanatic or a vehicle for plot twists. She is another Eren Jaeger. This is something that Attack on Titan: The Final Season episode 8 addresses outright when Falco explains: ‘They were trampled on. The enemy was attacked by Marley Warriors and lots of people died. This is revenge.’ To this, Gabi replies: ‘Did you… see it happen?’ In other words, ‘why should I try to understand my enemy and the reasons behind their actions when they caused me so much pain?’

This is the same self-centered sense of ‘justice’ that drives Eren Jaeger, leading him to commit such atrocities as attacking the internment camp of Liberio and killing thousands of innocent civilians in the process. To him, this is just reward for the untold pain and misery that Marley inflicted on him when they broke down the walls of Shiganshina, all those years ago. Damn the consequences.

Moving away from episode 8 for a second, the entire point of this first half of Attack on Titan: The Final Season is to make us question: who are actually ‘the good guys’ and who are ‘the bad guys’? If you’re anything like me, then you cheered just a little bit when the Survey Corps turned up to save Eren’s bacon at the end of episode 6; but then, you probably felt a little bad once you realized what they were doing: committing acts of war. An eye for an eye and the whole world goes blind, as the saying goes.

As to what kind of ultimate idea Attack on Titan is trying to put forward on this theme… that remains up in the air until the manga comes towards its imminent conclusion, and it remains far out of the scope of this review. For now, it is worth going over some of the initial hesitations that many, including myself, had about Studio MAPPA taking over the adaptation: mainly, pacing and animation.

Admittedly, the 3D animation for the Titans was a little rough in episode 1. Yet, by virtue of the story, we don’t end up seeing a whole lot more of it up until episode 6, as the action is mainly contained inside armored trains and various houses. This was always something that the production was going to benefit from, but it must be said that things appeared a lot more polished once the action started up again after the ‘Declaration of War’: either we just got used to it, or a clever mix of both 2D and 3D animation was utilized.

In terms of the pacing, that was something that similarly started off on the wrong foot. Episode 1 was fine, taking its time adapting chapters 91 and 92, but episode 2 then moved on to cover chapter 93, 94, and 95. Episode 3, in particular, suffered as it covered material from four chapters (94, 95, 96, and 97), missing out on a lot of Reiner’s character development. That was pretty disappointing. Still, things calmed down a lot once the action started again, with a maximum of three chapters covered per episode.

Obviously, Studio MAPPA wasn’t going to be able to fit in everything, but the noticeable omissions that they made also had the unfortunate effect of removing some of the flavor of the original arc, along with its slow burn. What’s more, it remains to be seen whether Final Season can truly adapt all the War for Paradis arc in the next eight episodes, or if we might be looking at some sort of second part. If it’s a movie (which it will probably be), then that would suck for international fans.

On the whole, though, the first half of Attack on Titan: The Final Season finishes up as a surprisingly competent adaptation of the Marley arc with episode 8. The new character designs and overall aesthetic work well for the changed setting and story focus, as mentioned in previous reviews, so there’re no problems there. I look forward to seeing what else Studio MAPPA can do; even if I doubt that this ‘final’ season really is so final.

You can watch Attack on Titan: The Final Season as it airs via Crunchyroll and Funimation.