A good anime is one thing, but a good anime based on a manga you love is another thing entirely. So when it comes to the Astra Lost in Space anime, I may be a little biased.

It just so happened that it wasn’t long after I started reading Kenta Shinohara’s original Astra Lost in Space through VIZ Media’s Shonen Jump service that the anime announcement initially came, and I’ve been following the series and it’s development ever since.

Although everything seemed great going into the series’ premiere back in July, the fact that series occupies a very special place in my heart alongside such other series as Dr. STONE and act-age meant that I couldn’t help but worry. Would this adaptation do the source material justice? Would the series finally get the attention it deserved? How on Earth were they going to fit it all into one cour?!

Luckily, now that the series has wrapped up, as a fan of the original manga I can confidently say that the Astra Lost in Space anime has done more than a good job – finishing up as a truly stellar adaptation in many, many ways.

One of the things that had me most excited about the Astra Lost in Space anime back when it was first announced was the fact that Masaomi Ando would be directing the series over at Studio Lerche.

The last time I checked in with Masaomi Ando, he helmed the 2015 adaptation of Norimitsu Kaiho and Sadoru Chiba’s School-Live! (Gakkou Gurashi!), which took several smart decisions to better honor the spirit of the original manga and make the story work with its one-cour runtime. 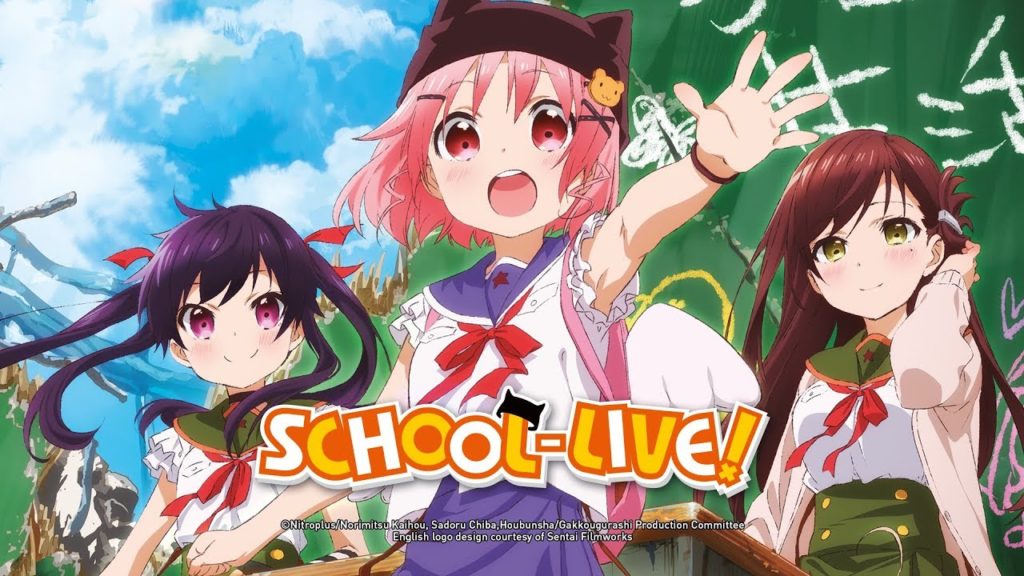 Since then, Ando has helmed various other high-profile and seemingly well-received adaptations, most notably the 2017 adaptation of Mengo Yokoyari’s Scum’s Wish. From this, it was quite clear that Ando had some potential as a director – potential which I hoped he’d bring to the Astra Lost in Space anime.

Studio LERCHE, on the other hand, I had already fallen in love due to their anime adaptation of Yusei Matsui’s Assassination Classroom. This adaptation cemented their potential for more left-field shonen series (read: not battle manga) – a description which was very apt for Kenta Shinohara’s Astra Lost in Space, which thrives on mystery and character storytelling.

Thankfully, my hopes were not misplaced. Firstly, director Masaomi Ando demonstrated his incredible talent as a director by matching, and in some cases even heightening the drama evoked by some of the series’ most iconic set pieces – such as when Kanata rescues Aries, or when Ulgar threatens to shoot Luca – by adding some real cinematic flair to the original manga’s presentation. 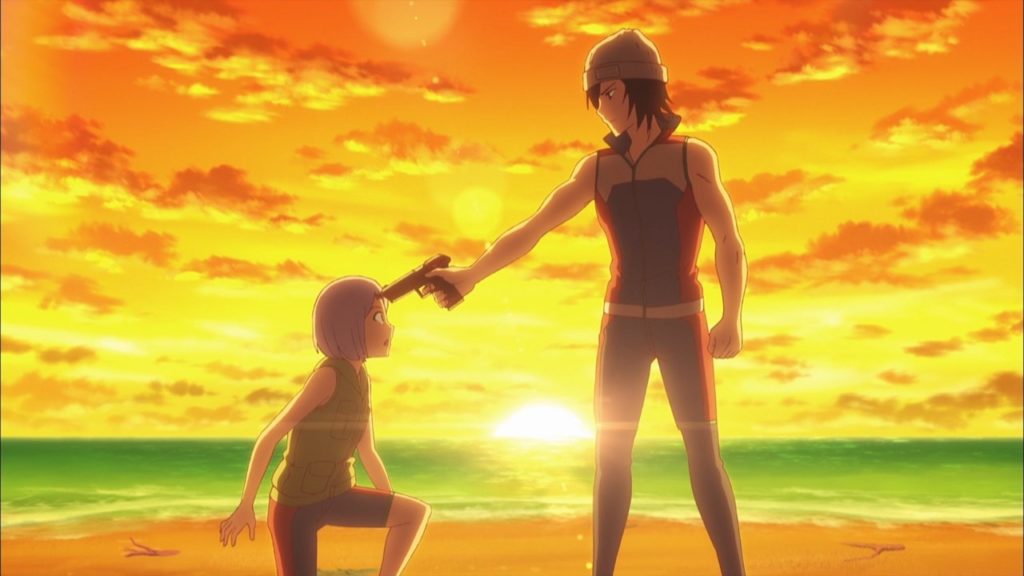 Major props must also go to Ando and screenwriter Norimitsu Kaihou, who somehow managed to get the whole story to fit in 12 episodes – albeit by skipping the opening and ending credits multiple times and making use of not one, but two double episodes – but that’s beside the point.

Ando admitted that this was a big headache for the team going into the anime’s premiere, so it’s incredible to see that they were, all the same, able to pull off an adaptation that doesn’t feel stunted in comparison with the original manga despite the many, many things that were left on the cutting room floor.

While a two-cour runtime may have certainly been easier, the hard work in cramming the story into one cour will not go to waste. As a story, Astra Lost in Space works better in a shorter runtime due to its mystery-laden thriller storytelling. Clearly, Studio Lerche was able to get the right man for the job, along with all of the hundreds of animators, colorists and other staff who managed to bring Ando’s directorial vision to life for the anime adaptation.

However, it’s not just in the bombastic, nail-biting setpieces that the Astra Lost in Space anime, nor the original manga, thrives.

At its heart, Kenta Shinohara’s original story is one of teamwork, friendship, and identity that owes much as much of its appeal to its more intimate character and dialogue as it does to it’s more iconic setpieces. To properly nail an Astra Lost in Space anime adaptation, therefore, the little moments had to be just as compelling as the big ones.

Unfortunately, in this respect, Ando’s directorial vision was somewhat lacking. Many dialogue scenes simply used static frames and stilted pans; a far cry from the more inventive direction found in the bigger setpieces.

And while we’re on the subject of Ando’s faults, I might as well mention the fact that the show can’t seem to make its mind up whether it wants to be widescreen or not, which is quite annoying. There are some instances where it provides an interesting visual metaphor, such as when Kanata and Astra reminisce about their journey towards the end of the series, but it seems to be mostly inconsistent. 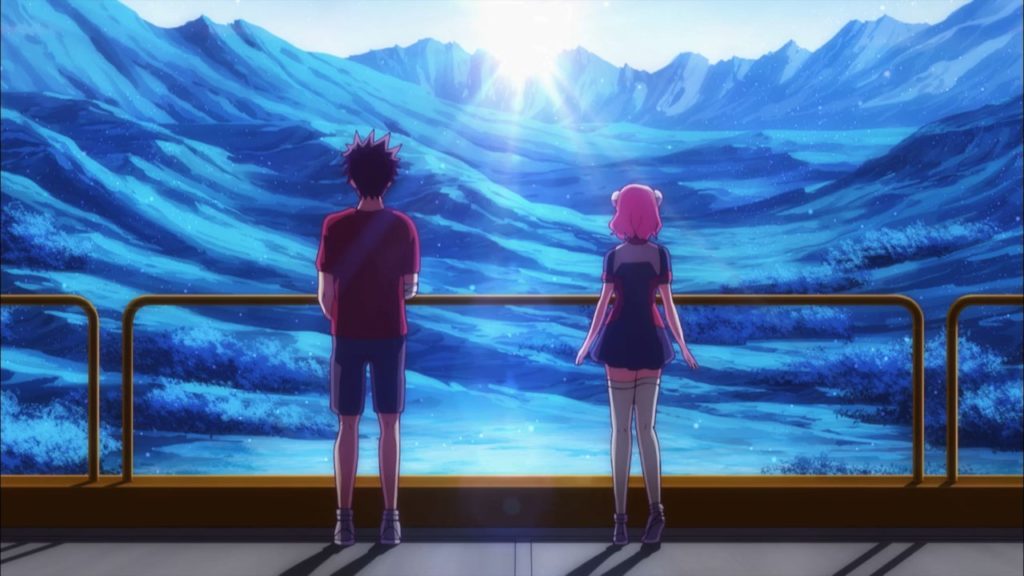 That’s just a minor bug bear though. Furthermore, it is important to stress that, just as no man is an island; no anime is simply the director’s – many, many people are involved with the series at all stages of production (looking at you, Hideo Kojima), therefore making it possible for other staff members to more than make up for a director’s faults.

Now, the staff list for the Astra Lost in Space anime is immense, so I won’t be able to discuss everyone here. Rather, when it comes to that idea of making up for the director’s flaws, I want to particularly focus on two groups of people; the composers, as well as the phenomenal voice cast.

While Ando’s direction on the more low-key dialogue and character scenes might be lacking, Masaru Yokoyama and Nobuaki Nobusawa’s subtle yet effective character themes and background music often more than make up for it. They also render the more visually distinct, bombastic setpieces that Ando seems to have a talent for that much more effective, in turn. 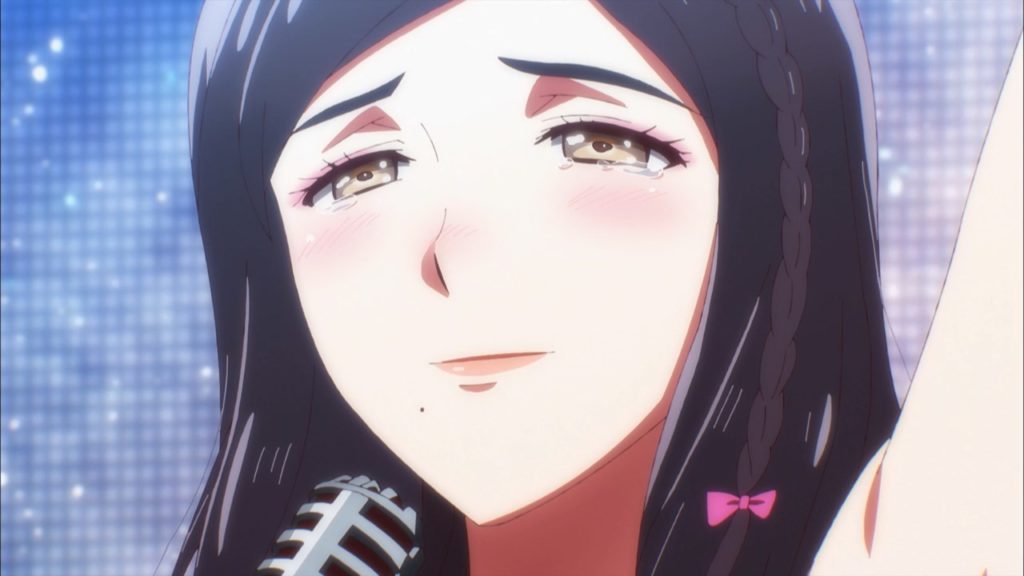 They even went the extra mile when it comes to insert songs, creating full versions of the two songs that the reclusive Yunhua sings during the story. This is important as these songs help to sell the show’s fictional universe (as well as the inevitable insert songs album), the importance of which is driven home by Yunhua’s emotional Adventure of the Astra that plays during the series’ epilogue.

However, it might surprise you to hear that if I had to choose my favorite element of the Astra Lost in Space anime adaptation, it wouldn’t be the music, the adaptation, or even the direction. Actually, I’d choose the absolutely stellar voice cast. 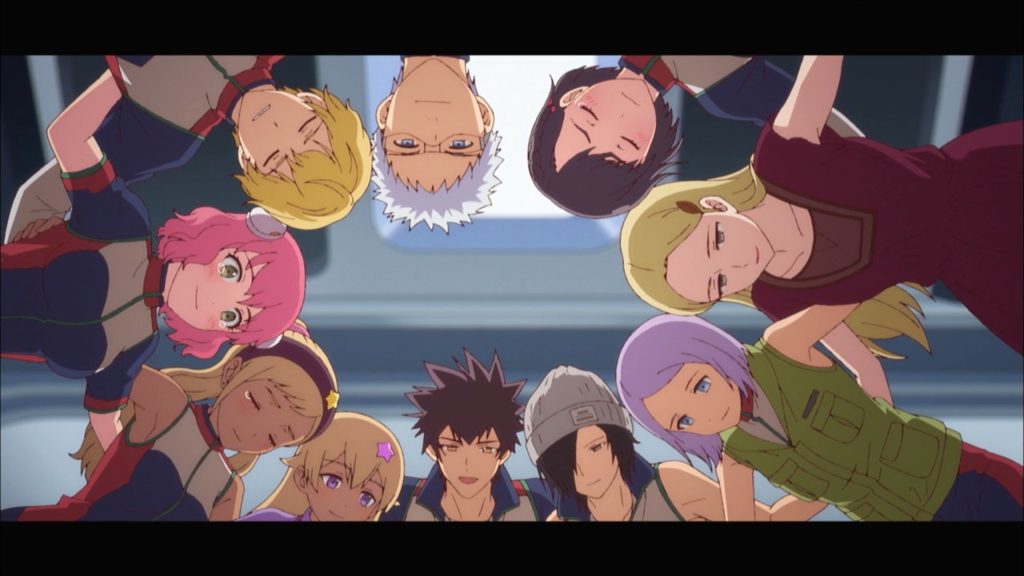 Masaomi Ando mentioned in his interview/discussion with original author Kenta Shinohara back in July that the team had been pretty ambitious with their initial cast list, and it’s not hard to see why they were convinced that they would end up having to settle for second best.

For the Astra Lost in Space anime, Studio Lerche opened their doors to such talent as Inori Minase for the role of Aries, Yoshimasa Hosoya as Kanata, Nobunaga Shimazaki as Charce, and Tomoyo Kurosawa as Quitterie – all of whom are established voice actors with many iconic roles, as well as singing careers.

Yet, by some miracle, almost all of these incredibly well-experienced voice actors were free, willing and able to join the voice cast; and it’s this experience that really shines through in their performances.

For starters, Inori Minase is perfect as Aries Spring, being able to capture her kindness as well as her eccentries perfectly – including her unintentionally hilarious laugh.

Yoshimasa Hosoya also brings the head-strong yet air-headed personality of Kanata to life, rendering his inspirational speeches that much more inspirational.

Nobunaga Shimazaki, on the other hand, plays well with the duality of Charce’s character and does justice to both his good and bad side – which makes his eventual betrayal that much more effective. 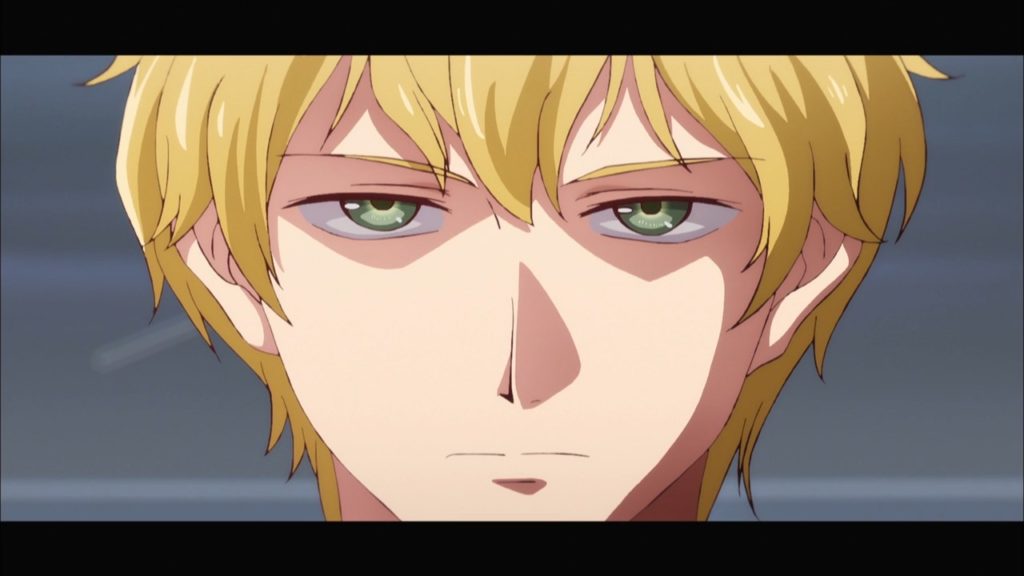 The star of the show here, however, has to be Tomoyo Kurosawa as Quitterie. It must be said that Quitterie was already my favorite character back when I read the manga, but Kurosawa brings the character to life in ways that I never fully expected.

No doubt owing to her experience in the voice acting industry, she pays special attention to intonation when delivering Quitterie’s lines, emphasizing her brattish, conceited personality. This works perfectly with Shunsuke Takeuchi’s deadpan delivery as Zack, making their relationship that much more endearing. 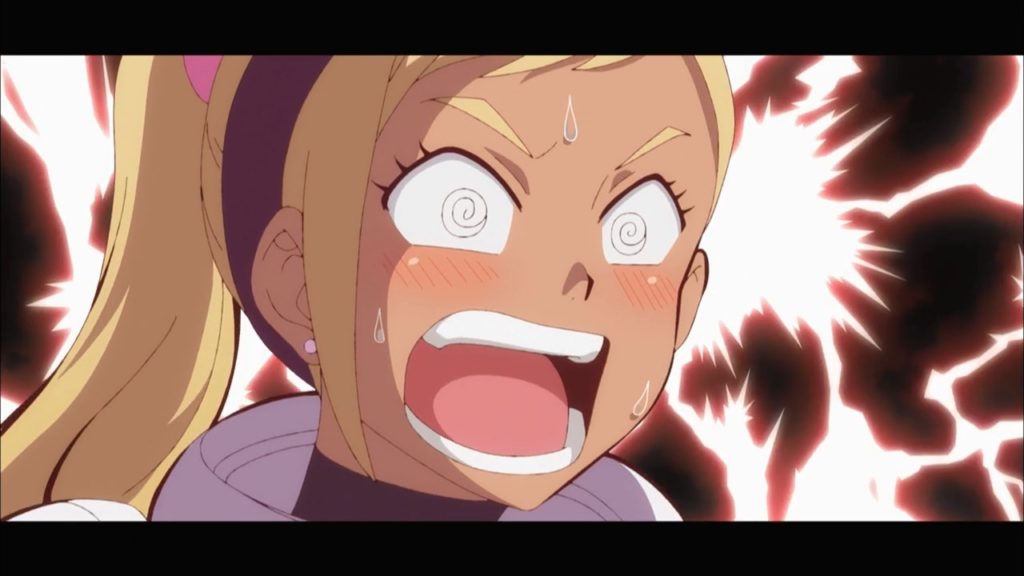 Although I’ve highlighted four voice actors in particular here, that isn’t to say that they somehow outshine the rest of the cast. Far from it. Almost everyone with a role in the Astra Lost in Space anime is perfectly cast and gives it their all (I see you, Rikiya Koyama as Kanata’s dad), which once more makes the otherwise visually dull dialogue scenes that much more engaging.

Another shout-out should go to less experienced and perhaps less established voice actors of Risae Matsuda and Hina Kino, who both did an excellent job in their respective roles as Luca and Funicia that more than matches up to the big names. I can only hope that their talent doesn’t go unnoticed and that we see them in more projects going forward.

Luckily, it seems as though it isn’t just me who appreciates how good the Astra Lost in Space anime really is. Performance and exposure on social media has been pretty solid, if less universal than other high-profile shows such as Dr. STONE and Fire Force that are also airing this season. Blu-ray sales also seem to be pretty solid for volume one, hovering around the 1,500 unit mark from what I can tell.

Speaking of Blu-ray, although I cursed Funimation for obtaining the streaming rights back when it was announced, I now realize that this is the best-case scenario for the series.

If someone like Crunchyroll (or, God forbid, Amazon) had obtained the rights, then it most likely would have only been made available for streaming and remained in the digital aether. This would be disconcerting as Astra Lost in Space is exactly the kind of anime that will benefit from being owned on physical media.

I’m not just talking about more directly benefiting the inspired production, either. Rather, the type of thriller storytelling that Astra Lost in Space employs makes it perfect for short, marathon viewings that can also easily be shared with friends by physically lending them the Blu-ray or DVD disk.

In a way, that mirrors the way in which I initially read the manga back in May – I discovered it was available through the VIZ Media Shonen Jump service, which I already subscribed to, and ended up binge-reading it all in a few short sittings. Others will no doubt also end up doing the same with the anime.

To conclude, the Astra Lost in Space anime left me more than satisfied as a fan of the original manga. It’s faithful and engaging, sticking to the series’ strengths and amplifying them in animated form, which kept me interested despite knowing exactly what was going.

If you’ve already given the manga a go and didn’t like it, then the anime probably isn’t for you. Yet new and old fans alike will surely appreciate the hard work and talent that went into what ended up being a truly stellar adaptation – pun intended.

You can watch the Astra Lost in Space anime via Funimation.