[Photo Report] We Battled Titans Atop the Tokyo Skytree 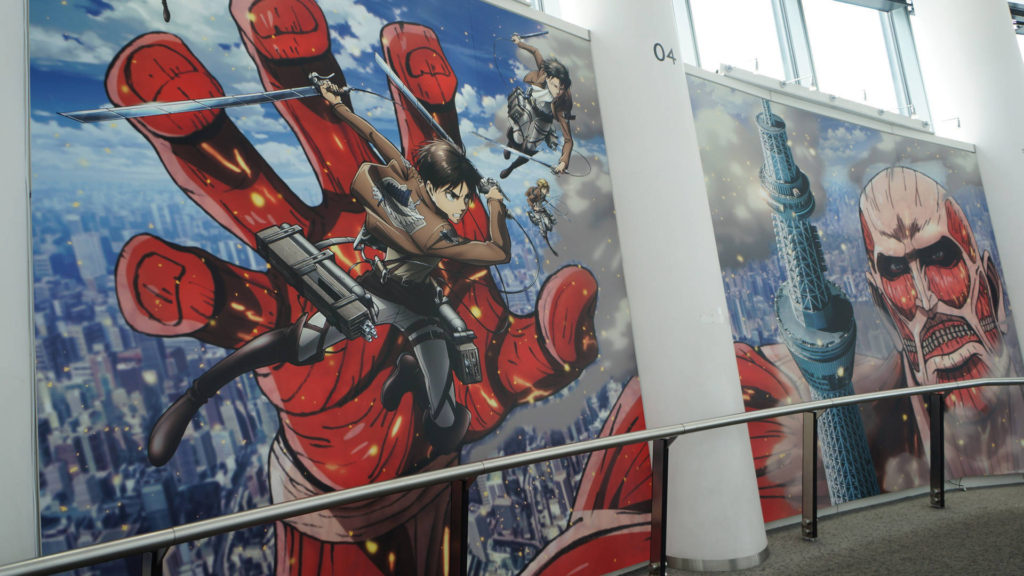 The Titans can be tall. I mean, they can be really tall. The Colossus Titan itself stands at a gigantic 60 meters. But do you know what happens to be just a bit taller? The Tokyo Skytree. At a mind-boggling 634 meters in height, the Tokyo Skytree is currently the tallest tower in the world, and the second-tallest man-made structure in the world period, after the Burj Khalifa. What better way, then, to drive home the fact that you are more than half a kilometer in the sky than with Japan’s colossally successful anime and manga hit Attack on Titan?

Aptly named attack on SKYTREE, please join us for a tour of all this epic event has to offer! Of course, you need an appropriate greeting as soon as you step off that elevator, right? Said elevator takes you from the normal admission floors 345-350 all the way up to the tallest accessible floor 450. You know exactly what you’re getting yourself into here. Let’s turn the corner then and begin our spiraling ascent to the top! The walls are adorned with character portraits and a large mural depicting the key artwork for the event. While taking in the spectacular Tokyo view, you can also peek some of the show’s pre-inked frames. Approaching the merch shop, the characters begin appearing in decal form on the glass.

What kind of anime crossover would this be without some of that sweet merch to buy? Get all of your “Attack on Titan” x Skytree merch here.

You definitely need some Attack on Titan cake sticks.

Things appear to be getting a little less-serious as we approach the cafe area. The chibi decals are adorable!

Of course, I totally had to get myself a Levi coffee. Every menu item also comes with a random character coaster!

Winding ourselves back down and out, we come across a few more great decals for effect.

Even the window washers keep within theme. In other news, these guys are probably braver than anyone in the Survey Corps…

Finally, I thought you may want to see some unobstructed views of the surrounding Tokyo area. These views are to ~die~ for!

Not only is it a collaboration that seems appropriate in the logical sense, but it’s also a great way to get even more fans eager to spend their cash engaging with your product. I’ll always hold that anime cross-promos are one of the smartest moves a Japanese company can make, as we’ve seen with the mega successes of other attractions like the Tobu Zoo.

If you happen to be in Tokyo through the next few weeks this summer, you’re in luck! You can catch the attack on SKYTREE event yourself, clear through July 14. Head on over to the official site in English here if you are interested.