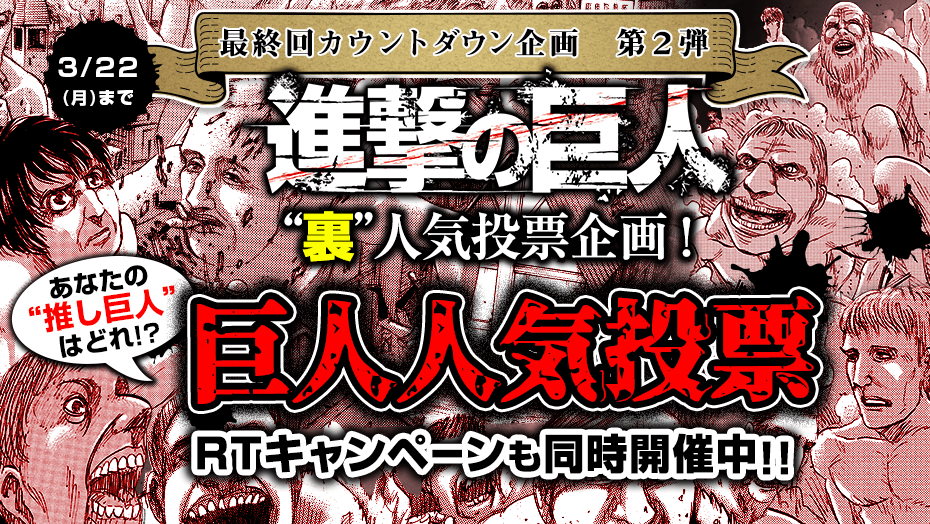 Hajime Isayama’s Attack on Titan may be coming to a close in a matter of weeks, but that doesn’t mean that the party’s over just yet. Bessatsu Shonen Magazine launched today a rather unique-sounding character popularity poll, asking users to rank their favorite ‘behind the scenes’ characters… that means the numerous Pure Titans that appear throughout the series, obviously.

Anyone who has watched or read Attack on Titan will know that the Pure Titans that turn up to eat our protagonists can look quite funny, and move even funnier. Hajime Isayama seems to find great joy in making these seemingly innocuous enemies as weird as possible, and WIT Studio more than matches this in animation in the first three seasons of the anime. Not many Pure Titans have appeared in The Final Season (handled by Studio MAPPA), however, due to developments in the overall narrative.

In any case, this ‘behind the scenes’ popularity poll asks users to choose from 100 different Pure Titans that have appeared throughout the Attack on Titan manga series. You can access the poll online here. These include some that you may recognize: the one that ate Eren’s mom is here (actually Dina Fritz, as revealed later in the series), and the one that looks like Santa. My money, however, is on the one with the fancy haircut known as the ‘Peering Titan.’

All jokes aside, this ‘behind the scenes’ Attack on Titan popularity poll is a unique way to celebrate one of Hajime Isayama’s most underrated talents as an artist. Certainly, without the ability to create weird-looking Pure Titans as this poll highlights, Attack on Titan wouldn’t be nearly as effective, nor would its atmosphere feel as oppressive, at least in the early portion of the story.

This isn’t the only project that Kodansha is planning before the manga ends, either: aside from the massive, record-breaking manga volume announced last week, there’s also exclusive manuscripts being uploaded to the Magazine Pocket app and full color chapters every month. Check out the official Shonen Magazine website for more information.