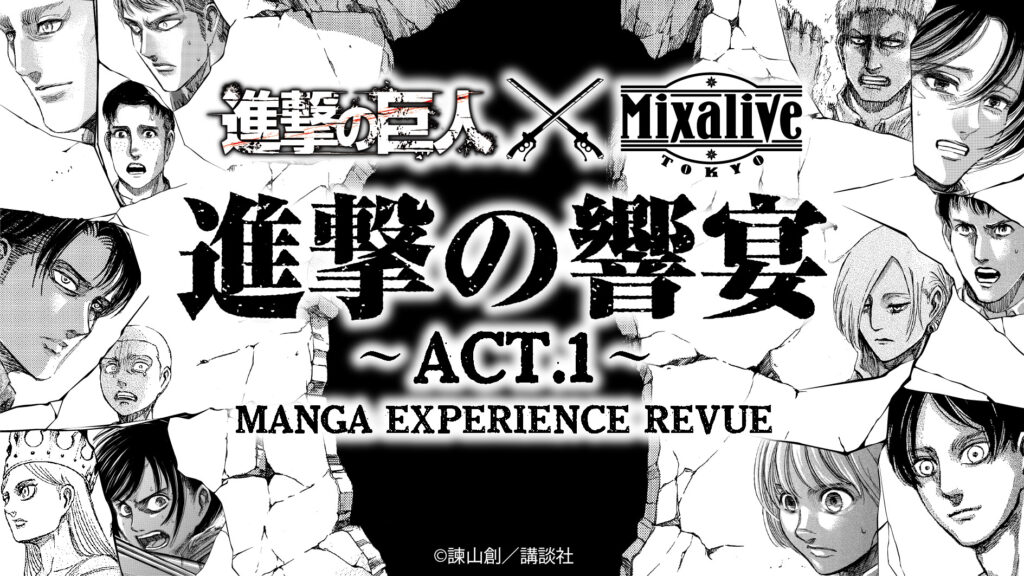 Lord knows that anime and manga-themed cafes and restaurants are a dime a dozen these days. Last month alone, we covered the Akihabara expansion of the Gundam Cafe, a Rilakkuma x Tower Records collaboration cafe, and a touring Inuyasha cafe. Nevertheless, there is reason to pay attention to this latest Attack on Titan restaurant: it actually attempts to recreate certain chapters from the manga to results both entertaining and mixed.

Titled Shingeki no Kyouen (Attack on Banquet), this new Attack on Titan restaurant is being organized by “live cafe” company Mixalive, who put together food events that are experienced with “all five of your senses.” As such, their events are close to the kind of “performance restaurants” that you can find at Universal Studios Japan and other theme parks, utilizing both themed food and live performers to create a unique dining experience.

The Attack on Titan restaurant will take place from September 4 to November 1 in the Live Cafe Mixa venue in Ikebukuro and will set you back 6875 yen per ticket. Along with advertising, the company has unveiled the menu for the restaurant, revealing the specific chapter-by-chapter theme for the food that may not, in fact, be specific enough.

Three out of four “courses” of the Attack on Titan restaurant’s menu are named after a specific chapter of Hajime Isayama’s original manga, starting with chapter 50 “Scream” for Course A; chapter 80 “The Nameless Soldiers” for Course B, and chapter 69 “Friends” for Course C. Course D is simply named “The Soldier’s Feast”, seemingly not based on any specific chapter.

Now, I don’t know about you, but I’m struggling to see the connection between the specific chapters and Mixalive’s menu. Does Eren using the power of the Founding Titan for the first time in chapter 50 really evoke the image of an omelette? How about Erwin dying in chapter 80 evoking the image of a croquette? The connection might become more obvious during the performance accompanying the dish, but either way, I’m interested in finding out.

You can find out more about the Mixalive Attack on Titan restaurant via the official website.

Attack On TitanMixalive
Join Our Discussions on Discord
Join Now