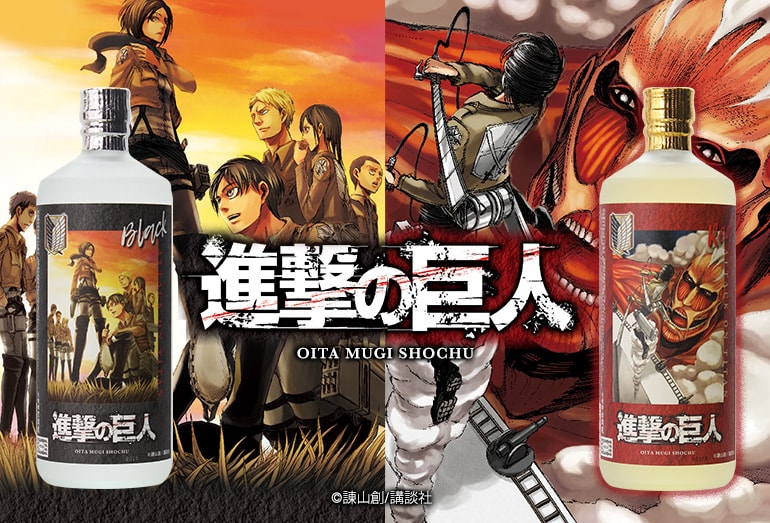 We love it here at OTAQUEST when popular anime and manga series get special alcoholic beverages, as there’s nothing better than gulping down a glass or two at the end of a hard day while watching your favorite show. Even so, this latest collaboration between Oimatsu Brewery and Hajime Isayama’s Attack on Titan is particularly interesting – mainly because the two types of mugi shochu that it is producing originate from the author’s home town.

Unveiled on Sunday evening, the two types of shochu available through the Oimatsu Brewery x Attack on Titan collaboration are as follows. Firstly, the Enma red label, described as a “mild” sake aged in oak barrels, best enjoyed either on the rocks or with soda water. Secondly, there is the Kuro Enma black label, a black malt sake with a “refreshing” flavor, recommended either on the rocks or with a couple of drops of water.

Both of these shochus come from Oimatsu Brewery’s popular ‘Enma’ line of spirits, which are brewed with 100% wheat malts. As it turns out, the basis for the Attack on Titan collaboration came from the fact that Oimatsu Brewery and Hajime Isayama both hail from the same place – Oita prefecture, which is where Isayama was born in 1986 before relocating to Tokyo in the 2000s. No doubt Isayama is as proud to see his characters gracing a local delicacy as Kyushu residents are to see him succeed.

Also curious is the fact that these Attack on Titan shochu are emblazoned with art from the manga, not from the anime. Other collaborations we’ve seen in the past, such as the Snickers collaboration and the eye drop ads, have used the anime’s art style and character designs. Still, I suppose if Oimatsu Brewery didn’t make use of Isayama’s art style, then it wouldn’t feel like as much of a homecoming for the Kyushu-born author.

Both varieties of the Attack on Titan shochu will cost you 1760 yen and can be purchased via Liquor Mountain.