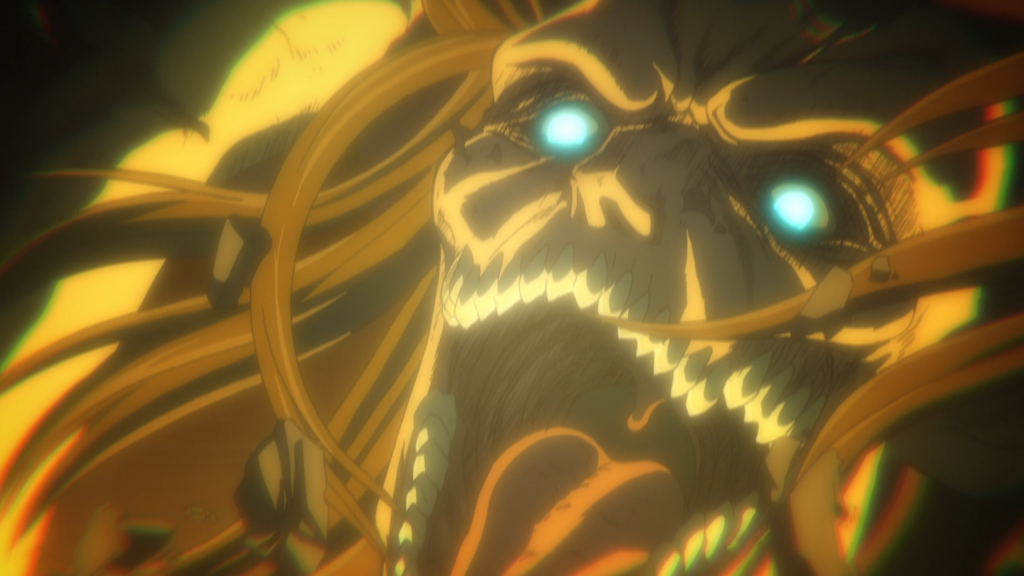 Attack on Titan, the decade-old international phenomenon even non-anime fans got tired of hearing about, has never been better than it’s been in The Final Season. Those who had been following the manga for years up until its fresh and supposedly controversial ending have known for a long time the story stopped being about a bunch of plucky teens fighting for freedom against those scary man-eating titans.

Anime-only hold-outs, a group of patient nerds including yours truly (meaning no manga spoilers in this review) waited four years for the anime’s haunting second season to premiere and totally destroy the first’s meta. Both parts of season three continued strong, delving into much sought-after backstory while chipping away at the show’s wider world.

What we couldn’t have imagined was Attack on Titan: The Final Season being a second paradigm shift straight into uncharted and unparalleled territories.

Instead of picking up where season 3 left off, The Final Season whiplashes the brimming-with-anticipation viewer into an unfamiliar war zone, and tells them that a bunch of brats they’ve never seen before are their new friends. They’re serving as aspiring titan candidates in the Marleyan army and the only familiar face for a minute would be Mr. Armored Titan Reiner, whose guilts, paranoia, and PTSD have turned him into a living ghost.

Marley’s a civilized society with relatively advanced technologies an ocean away from the pitiful Titan-ridden island Eren and friends hail from, but they live in fear of retaliation from the devil-branded island society and plans to annihilate them for the sake of world peace.

What, you thought a titan infestation alone was adequate pest control?

See, the islanders are the descendants of Eldia, a formerly powerful kingdom that once oppressed the now powerful Marleyans. After getting their hands on mysterious titan powers, the Marleyans condemned the Eldians to a small island and sent titans their way for generations. Some of those in Marley, particularly these young child soldiers, are descendants of Eldia trying to prove their worth as ‘honorary Marleyans.’ There’s a bit more to the setup than this, but now this direct cultural and racial schism makes up the backbone of The Final Season, and retro-attractively, the entire series.

Many have criticized AoT manga author Hajime Isayama for controversial statements he’s made to related subjects, but without having taken in Attack on Titan’s full scope. Wherever he falls on that stupid Twitter X-Y axis political chart in his heart, Attack on Titan: The Final Season paints a daringly nuanced and morally ambiguous picture to strike at the unnecessary cruelties of war and prejudice.

Attack on Titan: The Final Season successfully captures how government-pushed and culturally supported nationalistic rhetoric can infect both a society and its individual members to the quick. Take young Gabi for example, one of those kids we mentioned the show tells you is a new main character: She enthusiastically fights for the Marleyan army, holds a devout hatred against those ‘devil Eldians’, and thinks nothing of taking human life. All terrible traits on paper, but she’s just a 12-year-old kid who clearly grew up being force-fed propaganda and lies her whole life.

Does blame lie with her?

Instead of The Final Season making you contemplate it, she’s forced to contend with her deeply-rooted biases in a truly tumultuous, traumatic fashion. Some lesser show might see Gabi on the receiving end of a stern talking to, but instead of doing anything so safe and bored, the show bludgeons her with kindness from a family of someone she killed in cold blood. Name one other anime with tension like this.

Chronicling what makes Attack on Titan: The Final Season conceptually sound fails to explain entirely what made each week’s episodic dose heaven. Studio MAPPA stepped up to deliver an animation style that ditches the brilliance of the older season, peppering in grunge and bleakness much closer to Isayama’s original style. With the backdrop of this season being ‘War Theater’, this grittier visual presentation perfectly matched the ambitious and risky story the show wanted to tell.

Of course, the previous distinct seasons of Attack on Titan have duly raised its own stakes and audience expectations alike, making each and every scene here a simultaneous pay-off and an invitation to drink the kool-aid deeper: the subject material and its real world relevance lingering in your consciousness while the masochistically tense atmosphere seizes your heart.

Plus that opening theme? Woof.

Continuing on about Attack on Titan: The Final Season feels slightly inappropriate with more episodes coming out to conclude the story this December. Manga readers know ‘the ending’ already, but especially with how MAPPA has elevated the anime to new highs, I welcome you to take the high road and wait for the best possible viewing experience.

Nothing coming out of television anime in years has dared to touch the same narrative territory. Bad CG and all.

You can watch Attack on Titan: The Final Season on Crunchyroll.