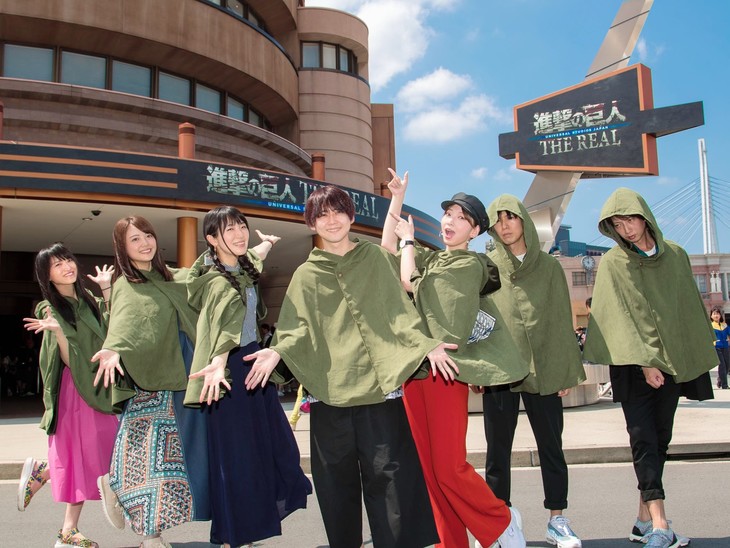 The prospect of experiencing a theme park attraction based on your own anime or manga series is simply too exciting for many creators to resist. It seems as though this is also the case for the voice cast of the Attack on Titan anime who visited the park’s Attack on Titan: The Real attraction over the weekend and came away very enthused.

The cast, clearly not afraid of being spotted during their trip to experience Attack on Titan: The Real, all donned the iconic green Survey Corps mantles. I must say, they definitely do look the part.

First on the agenda was a visit to the special exhibition attached to Attack on Titan: The REAL. This exhibition features incredibly lifelike full-scale statue replicas of Erwin and Levi, the latter of which Kamiya Hiroshi was of course drawn to.

In coming face to face with his own character, Kamiya remarked that “[The statues] surpassed my expectations so much so that even now I could imagine them actually moving. You really have to see this kind of quality in person to understand it. You could even see the veins in their hands and, if only he wasn’t holding a cup, then this would certainly be what Levi would look like in real life.” 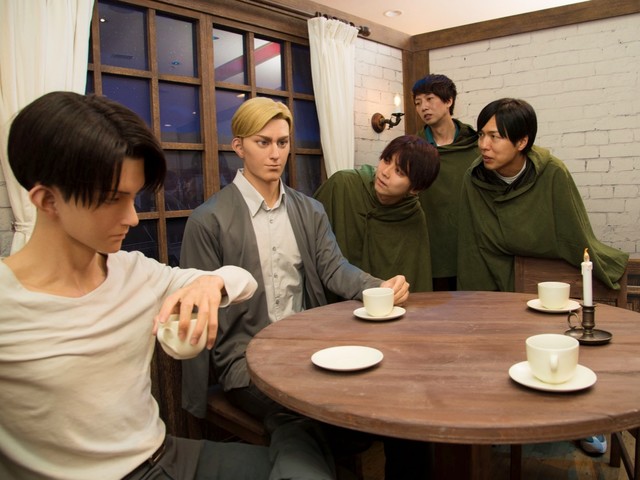 After such a fateful encounter, the cast then moved on to grab some food at the Attack on Titan themed restaurant. While a lot of the voice cast had gathered for the trip, there were some notable absences – most prominently, Sasha Braus’ voice actor Kobayashi Yuu, who’s absence Ishikawa Yui reminisced about while poking at some potatoes she had ordered.

Finally, the cast moved on to check out their main objective for the day, Attack on Titan: The Real. The attraction uses 3D film as well as moving seats and live actors to plunge guests into the chaotic battle for Wall Maria, as seen in part two of the anime’s third season.

This immersion was perhaps a little bit too much for Kaji Yuuki, who professed that he couldn’t help but cry during the ride. Considering that Kaji got his start as a voice actor thanks to his role as Eren on Attack on Titan, however, that emotion is perhaps warranted.

Comments from each of the cast members made their appreciation for the USJ Attack on Titan attractions clear, with many of them emphasizing immersion as well as a wide appeal to both long-time and new fans of the series.

The Attack on Titan attractions, including Attack on Titan the REAL, are currently running at Universal Studios Japan in Osaka as part of the ‘summer term’ until August 25. For more details, check out the official website.