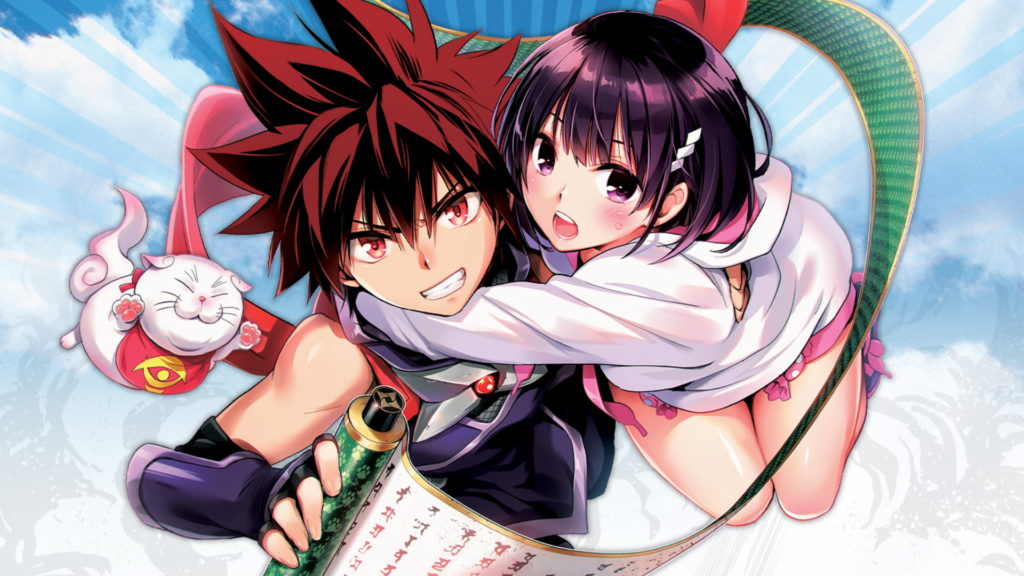 Hello there and welcome to Your Manga Week. Finding time to keep up with all the manga that releases on a weekly basis can be difficult, so I’m here to tell you what’s worth your time and what’s not. We’ll also be discussing the story and arc developments as they come. This week, we’re talking Ayakashi Triangle chapter 1, Chainsaw Man chapter 73, and Undead Unluck chapter 20.

Kaiu Shirai and Posuka Demizu’s The Promised Neverland coming to an end is probably the biggest piece of manga-related news this week, but I’ve already dealt with that in a separate article. To cut a long story short, the series’ ending left me quite disappointed but not at all surprised given the series’ long-term decline. In any case, there are new series to check out – shall we?

In a turn of events that no one probably predicated, Kentarou Yabuki – creator of Black Cat and artist of To Love Ru, among others – has returned to Weekly Shonen Jump after 11 years away. His Ayakashi Triangle is, in turn, one of four new series set to fill the magazine’s line-up after the departure of Demon Slayer, Yuuna-san, The Promised Neverland and possibly one other, if misfortune strikes. But can the veteran author make use of his many years of experience to ensure that his long-awaited return is truly worth it? 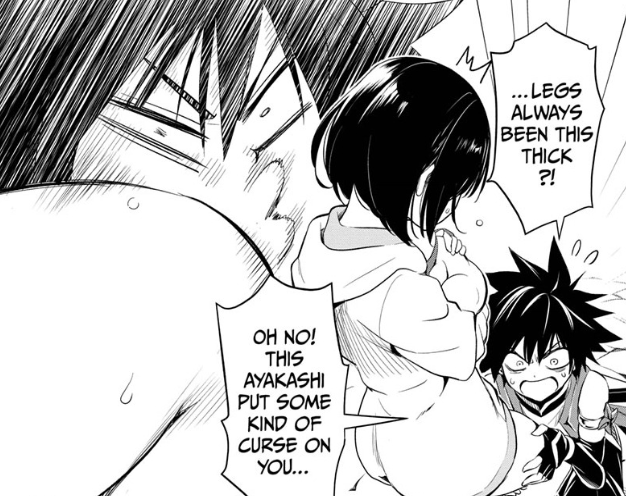 It is perhaps quite unfortunate, then, that Ayakashi Triangle chapter 1 comes at a time where Weekly Shonen Jump is stuffed full of series with supernatural trappings: Jujutsu Kaisen, Guardian of the Witch, MASHLE, and Bone Collection. That last example is particularly salient as it also deals with the world of Japanese demons and youkai, which naturally puts the two series in competition.

No prizes for guessing the outcome, however – not only is Bone Collection terrible, Kentarou Yabuki has already demonstrated that he can write a much more compelling story than Jun Kirarazaka in a single chapter. Ayakashi Triangle chapter 1 introduces us to our main character, Matsuri Kazamaki, who is continuing the family business of being an ‘exorcist ninja.’ What follows is a short, self-contained narrative whereby Matsuri’s childhood friend, Suzu, comes into contact with the ‘King of Ayakashi’ and nearly ends up falling victim to his wiley ways. To cut a long story short, a battle ensues and, at the end of it, Matsuri gets turned into a girl. 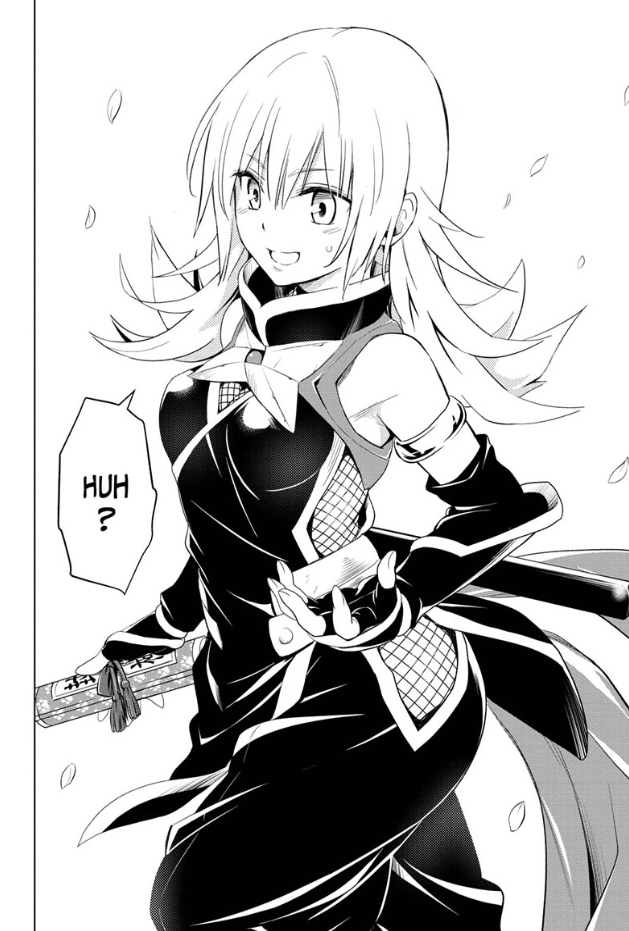 Here, the real gender bending conceit of Ayakashi Triangle reveals itself. As a result, the majority of Ayakashi Triangle chapter 1 can be seen as mere set up, meaning that it will take a couple more chapters before the true merits of the series can be judged. But even at this early juncture, Yabuki demonstrates the depth of his experience: telling an effective self-contained story, for one, but also blowing all of the rookies out of the water with his eye-catching panelling and stylistic art.

Nevertheless, experience does not always equal success. If the editorial department are betting on the past successes of Yabuki to deliver another hit, then they should take another look at the failure of Samurai 8. There is, however, some potential here: if readers aren’t too tired of demon and youkai stories yet, then the gender bending premise might be enough to carry it forward. At the very least, Ayakashi Triangle chapter 1’s classic ideas definitely do serve to demonstrate just how much Bone Collection takes from other series!

The return of Kentarou Yabuki with Ayakashi Triangle chapter 1 also begs the question: have times changed? Yahoo! Japan certainly thinks so, with them publishing an article last week claiming that Weekly Shonen Jump is currently in the midst of a “rookie boom.” Providing the basis for that are such series as Jujutsu Kaisen and Act-Age, but also Chainsaw Man: although Tatsuki Fujimoto does have prior experience in the form of Fire Punch, this is his first time in Weekly Shonen Jump. With this in mind, Chainsaw Man chapter 73 serves as a perfect encapsulation of why it is leading the charge.

There are so many exciting plot developments in Chainsaw Man chapter 73 that it is honestly hard to summarize and explore them all in such a short space of time, but here goes. Firstly, Denji, Power, and Aki are summoned to Makima’s office, where they are told that even if Aki withdraws from the operation to defeat the Gun Devil, Denji and Power will still be going. This causes Aki to change his mind, presumably out of worry for his newly-formed dysfunctional family, but I doubt that this is the last time that Aki’s reticence will come up. Mark my words: his prior decision will come back in some form or another to haunt him. 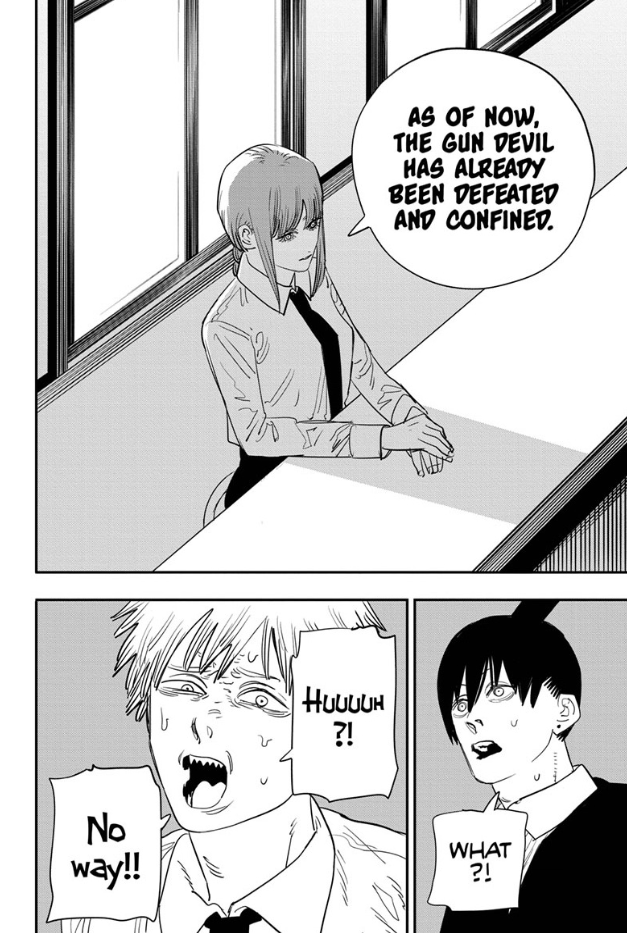 In any case, what Makima says next is even more surprising. As it turns out, the Gun Devil has already been “defeated” and pieces of its body are possessed by various countries all around the world. This transforms the Gun Devil from a tangible, overall antagonist to more of an antagonistic force – made all the more muddled by Makima’s admission that many of the series’ prior gun attacks were probably man-made and had nothing to do with the Gun Devil.

Revealing the true identity of the series’ overall antagonist was always going to make Chainsaw Man chapter 73 an exciting installment, but the implications of this information make it doubly so. Firstly, as Makima admits, an operation to ‘defeat’ the Gun Devil will most likely take the form of some “kind of war,” as Japan simply takes fragments of the Devil from another country in an endless cycle of victory and defeat. Secondly, Makima’s admission that there is no real way to ‘defeat’ the Gun Devil means that her promise to Denji, that she would grant him “any one wish” if he defeated it for her, is impossible to fulfill. Taken alongside prior chapters where Denji has doubted his true desires, this might make Chainsaw Man chapter 73 a key turning point in his character development.

Perhaps the most surprising development in Chainsaw Man chapter 73 comes, however, at the very end. As he is talking to Denji and Power, Aki gets a premonition from the Future Devil, which says that Denji is going to “slaughter” Aki and Power, after which “The Devil that Devils fear most” will appear. 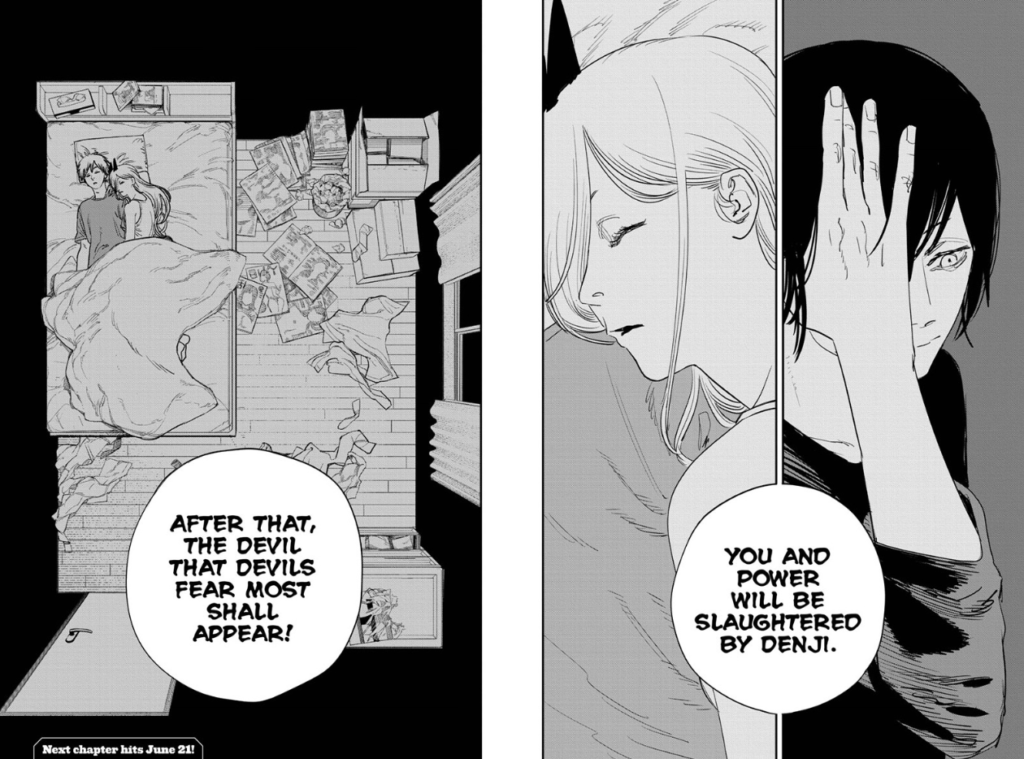 That last statement seems to support the theory that Denji is, in fact, the Lord of Hell Lucifer himself, which was implied all the way back in chapter 53. Regardless of whether that turns out to be the case or not, the fact that Denji will kill two of his most beloved friends in the future is as surprising as it is horrifying – whether or not that turns out to be the case, we’ll just have to wait and see.

Finally, we come to Undead Unluck chapter 20. Much like Chainsaw Man chapter 73, Yoshifumi Tozuka is doing a lot of narrative progression here, but in a thankfully less concentrated format. Still, it strengthens the argument that Weekly Shonen Jump doesn’t need old veterans such as Kentarou Yabuki in the form of Ayakashi Triangle chapter 1 – the kids are doing quite alright, thank you very much.

Undead Unluck chapter 20 kicks off straight away by addressing the cliffhanger that rounded out last week’s chapter: the addition of UMA Galaxy. At first, what this penalty entails seems relatively pedestrian – the addition of outer space and other planets, which apparently didn’t exist in this universe beforehand – but things quickly turn sour as a highly advanced alien race sets their sights on Earth, and intergalactic domination. 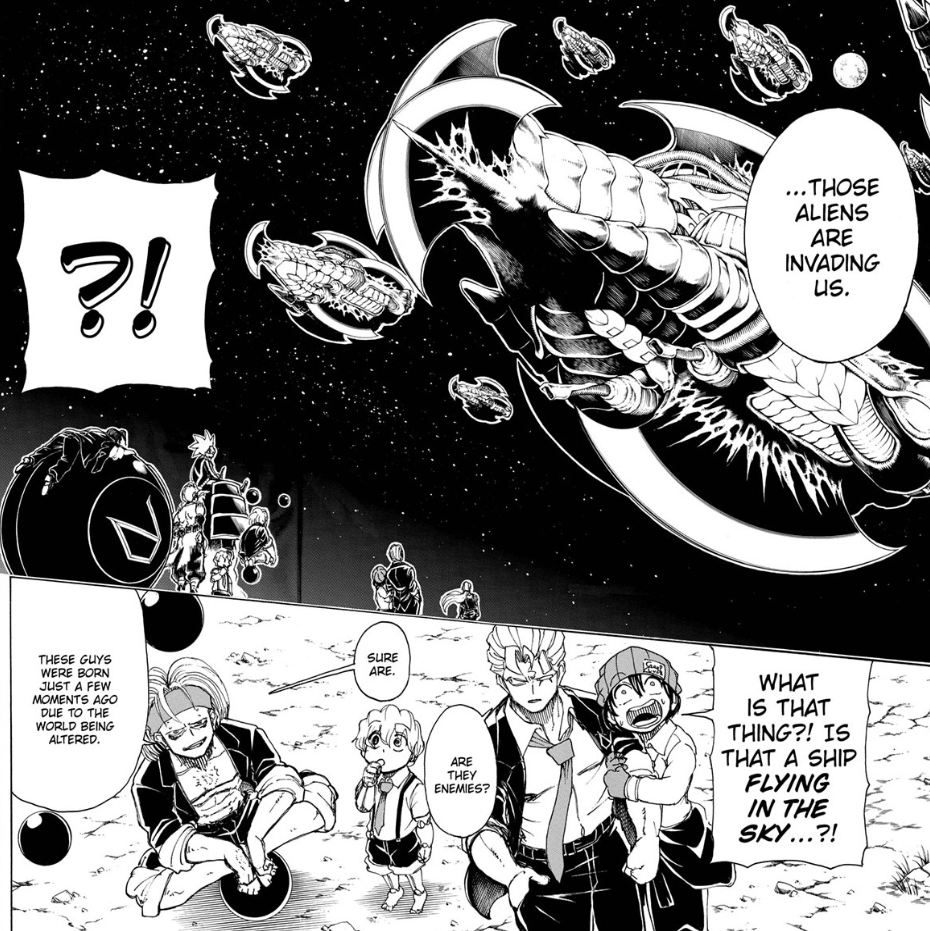 Not only did this make me think of the gone-but-not-forgotten Gintama, it also acts as a perfect demonstration of Yoshifumi Tozuka’s incredible potential for invention. Who would have thought that the penalty would be the addition of outer space, and that this would lead to an alien invasion? Alongside all of the other myriad plot developments, this shows that the author has an incredible imagination that should, hopefully, lead to a series that continues to awe and inspire in the long run.

In any case, how the aliens are defeated in Undead Unluck chapter 20 is also worth focusing on, as it offers us a glimpse of another member of the Union: Juiz, the group’s leader. She defeats the aliens by taking off her helmet and asking their leader if taking over Earth is their “justice,” after which she manages to destroy the entire fleet by way of her ability, “Unjustice.” 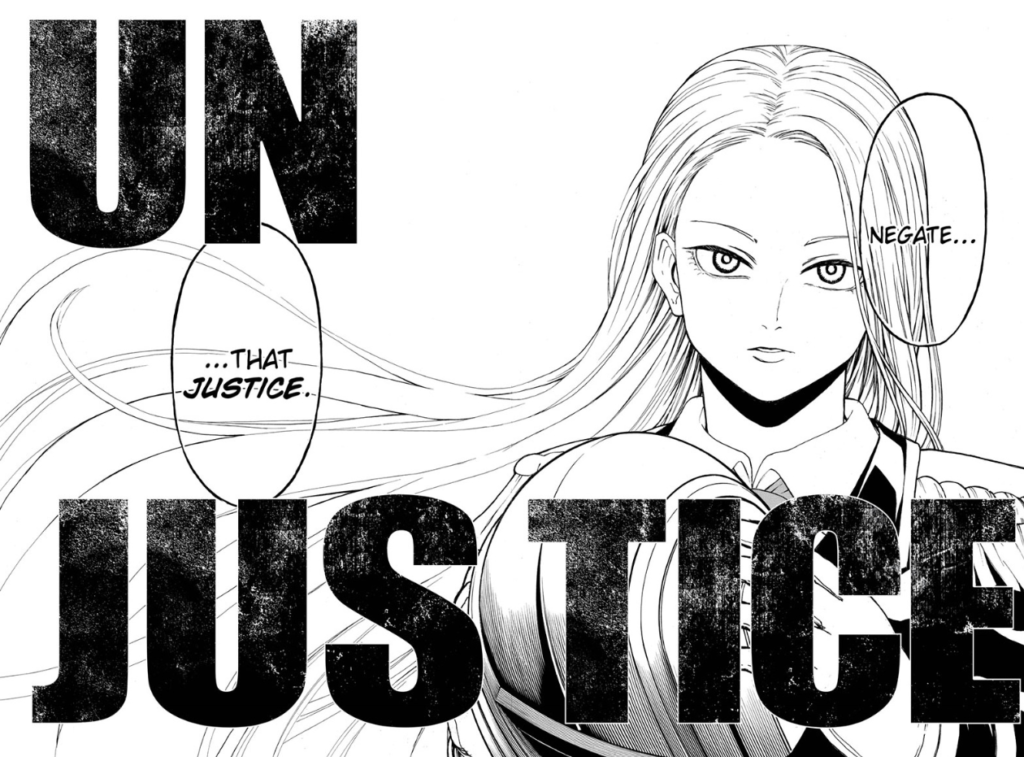 Clearly, Juiz’s ability has something to do with what her opponents view as ‘just,’ which makes it very situational. What if the aliens’ ‘justice’ had been something different? As she explains, humanity only narrowly avoided the fallout from the penalty because of her ability, but it won’t always be like that. Furthermore, there actually isn’t that much more room for error – as it turns out, the Union actually discovered a “stone tablet” around the same time that they discovered Apocalypse, which tells them that humanity is only one penalty away from the “final penalty”: Ragnarok.

This is just another word for the apocalypse, so consider the stakes raised. Undead Unluck chapter 20 also sets up for the future by literally spelling out the objectives of our characters going forward: avoid getting a penalty, yes, but also fill that eleventh seat that was added as a reward for fulfilling a Quest last time. Thus, the journey to find Unrepair – who may or may not be able to grant Andy his long-awaited death – is on.

What Undead Unluck will do with all of this plot development in the future is an open question. Obviously, the series won’t be able to deal with it all at once, but there is a clear path now to an eventual resolution. This seems to represent a certain amount of confidence on the part of Yoshifumi Tozuka – you wouldn’t set all these things up if cancellation was around the corner – so it’s safe to say that Undead Unluck will be sticking around for a while yet. And if chapter 20 proves anything, it’s that we’ll be happy to have it.