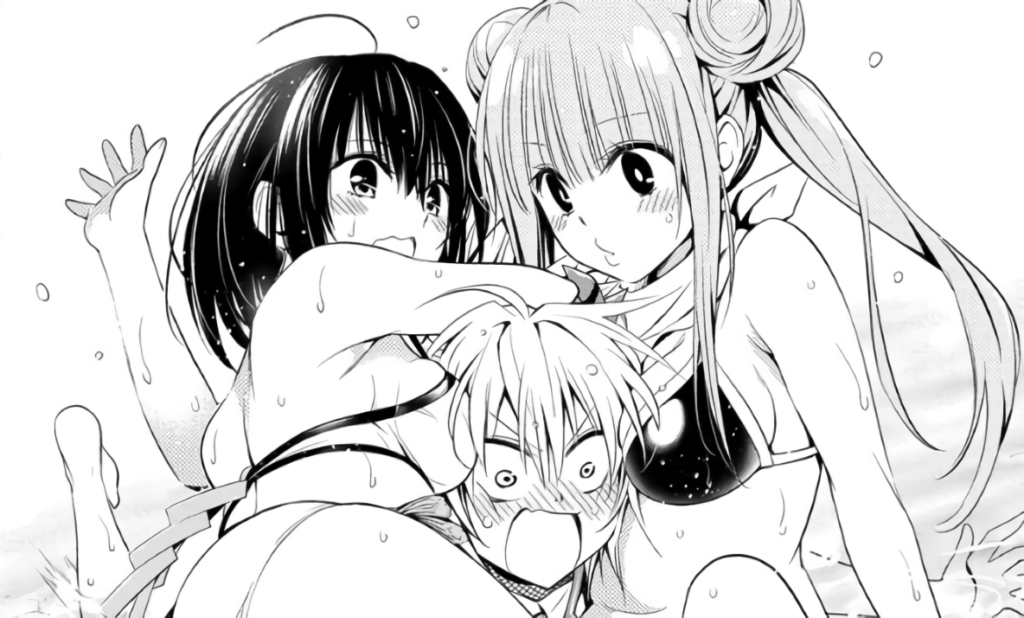 The beginning of a new week can only mean one thing: time for new Weekly Shonen Jump! This is where Jacob investigates the latest and greatest in the magazine, telling you what’s worth your time and what’s not. You can find coverage of other series under the tag Jump Time. Here’s Ayakashi Triangle chapter 47.

At one point in Ayakashi Triangle chapter 47, Shirogane remarks, ‘I see. Ridiculous, but it makes sense.’ If I were to be so bold, I would say that this sums up the entire series itself.

Here’s Reo’s plan to draw out the hiderigami that’s currently inflicting a heatwave on the inhabitants of their village: frolecking in the sun to show that they’re enjoying their youth without caring about the extreme heat. This makes sense because Shirogane explains earlier in Ayakashi Triangle chapter 47 that ‘it gets stronger by being deified by the humans that suffer through its droughts.’ In other words, it finds joy in inflicting suffering on others: refusing to submit to that will inevitably cause a confrontation.

Of course, all of this is just simply an excuse for Kentaro Yabuki to finally do a beach episode, complete with ninja exorcist swimsuits and plenty of fanservice. Yet, underneath all of that is a genuinely competent story with clear stakes, goals, and ways to achieve them: such is the everlasting conundrum of Ayakashi Triangle. 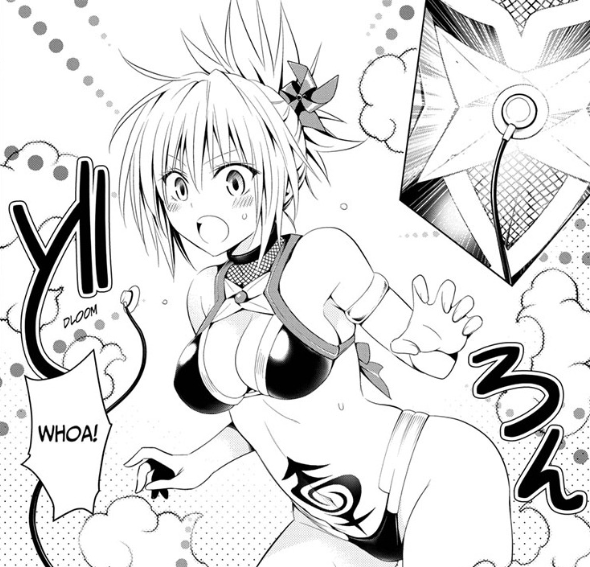 The sense that Ayakashi Triangle chapter 47 is actually pretty well put together also comes in at the very beginning, when Ninokuru remarks that ‘I’m surprised that the ayakashi have technology similar to exorcist ninja’ in response to Suzu’s new ayakashi medium outfit. This provides the opportunity for Reo to explain that ayakashi are actually the source of many mythological items, performing a little bit of worldbuilding.

All of this is opposite a full-page panel of Matsuri ogling at how attractive Suzu is in her new outfit, of course!

Finally, it’s important to point out that there is a narrative justification for putting all the characters in swimsuits in Ayakashi Triangle chapter 47. Aside from the need to have fun in the sun, it also amplifies the romance rivalries that exist among the main characters: Suzu remarks that Reo has ‘a nice figure,’ fuelling her fears that she might take Matsuri away from her. A nipple slip from Matsuri (censored in the magazine), meanwhile, furthers the idea that Ninokuru actually likes her. He’s pretty embarrassed, after all.

Will there ever come a point where I no longer have to defend my love for Ayakashi Triangle? Probably not, but one thing’s for sure: Kentaro Yabuki isn’t a bottom of the barrel writer, even though he sure does write some pretty sleazy stuff.

You can read Ayakashi Triangle chapter 47 for free via VIZ Media.