Slice Of Life Anime has come a long way since Azumanga Daioh burst onto the scene in the early 2000s, turning everyone that watched into die-hard believers. Perhaps having more in common with something like Seinfeld, Being another show about nothing as they say, than other prominent comedic anime of the time like the seemingly cocaine-fueled Excel Saga or the slapstick of Love Hina, its indulgence in the lackadaisical was its appeal.

Today, slice of life anime shows that mostly focus on the daily lives of characters instead of building up to any grand plot, are still abundant. Your K-On!’s and your Lucky Stars can all be traced back to Azumanga Daioh.

However modern offerings are a bit more pointed than those of previous generations. Titles like Chio’s School Road centered around the wacky hijinks of a girl just trying to get to school every day. Asobi Asobase revels in its dark and absurd humor.

These are both still slice-of-life anime that have evolved from their more humble origins. Still, whether we’re talking about Nichijou, Kaguya-Sama Love Is War, or any other day to day show, they all owe a debt to 2002’s Azumanga Daioh.

While it’s hard to say whether or not Azumanga Daioh is technically the first slice of life anime ever, it was definitely the first of its kind to take off the way that it did. No girls trying to learn instruments, no turning conquests of love into 12th-dimensional chess, Azumanga Daioh simply followed the lives of six high school students going about their daily lives.

Light-hearted with a comedic edge, the show’s still as refreshing and endearing today as it was nearly 20 years ago when it came out.

Going Back To The Azumanga Daioh Manga

Azumanga Daioh started out as a manga by a younger Kiyohiko Azuma. He would go on to create Yotsuba&! which is a nationwide phenomenon in Japan. Before trading his wonderful group of high school friends for a curious green-haired little girl, Azumanga Daioh was something of a hit comedy manga when it came out.

The original manga was actually a 4-Koma, or four-panel, work that featured collections of 4 part strips closer in concept to newspaper comics than what we normally think of as manga. Each chapter consisted of a handful of smaller four-panel comics that gleefully depicted the relatively wacky but still generally everyday antics of these characters. What happens if you hiccup 100 times? A field trip to Okinawa! Surreal new years dreams and more.

Azumanga Daioh turned everyday life into a riot and the anime does the manga every bit justice. You can’t go wrong either way.

What The Azumanga Daioh Anime Brought To The Table? 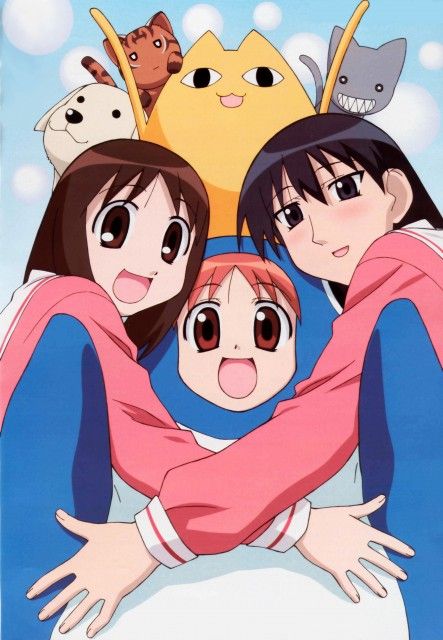 As far as anime adaptations go, Azumanga Daioh isn’t too shabby of a production. Being a simple high school comedy show that simply meanders through the day by day, animation studio J.C. Staff didn’t have to provide some crazy Mob Psycho or Studio Ghibli type animation. Where they did have to come through though was in creating a war atmosphere and bringing the Azumanga girls’ charm to life.

By all accounts, JC Staff and director Hiroshi Nihikiori who’s gone on to do each installment of A Certain Magical Index succeeded in both tasks. Using a lot of bright and warm colors, the anime makes the world of Azumanga Daioh feel tangible, that the residential area of tokyo the girls go to school in feels like a real place. When it comes to characters, Azuma’s signature soft cartoon edge, and his occasional characterituresque exaggerations, was translated perfectly to screen.

However that visual aspect of Azumanga Daioh the anime succeeds at replicating the manga, but it’s the sounds that really elevate the anime to something special in its own right. Masaki Kurihara made a delightfully playful soundtrack using a number of atypical instruments like kazoos and recorders to impart a sense of curiosity to the show with its jovial bordering on nostalgic melodies. Plus whether you’re watching this anime dubbed or subbed, the voices are all absolutely spot on and spirited enough to draw you in.

Whether we’re with the girls during their sports festival, indulging on their summer vacations to Chiyo’s beach house, or helping out with the Culture Festivals, the anime does a bang up job of making their school life as memorable to you as it is to them.

The anime, as well as the manga for that matter, was originally licensed by ADV Films and was eventually relicensed by Sentai Filmworks years later. You can buy it on DVD or watch it on HI DIVE.

We keep mentioning the cast of Azumanga Daioh but we haven’t introduced them yet. Any show, but especially a slice of life show with no plot, depends on its characters. Azumanga Daioh does the smart thing by giving each girl a few unique traits and qualities and having them play off each other resulting in a lot of fun for the viewer. Once you get to know them, you’ll never want to leave them

Chiyo Mihama, affectionately referred to as Chiyo-Chan, has a few things going for her. She’s adorable, constantly pleasant, and she’s a genius but she also happens to be a literal child. At the start of the series she’s ten years old but due to being so smart she’s already starting high school.

For Chiyo ponytails are her go to, her signature look, how she presents herself to the world. They’ve become such a piece of in series iconography that Osaka regularly dreams about them falling off, which generally causes Chiyo to ‘stop working’. Also in the dreamworld, Chiyo’s giant yellow cat of a Dad resides asking people if they’ve eaten their tomatoes.

Real name, Ayumu Kasuga. Osaka’s called Osaka because she transferred in from Osaka! She’s aloof, forgetful, definitely a bonafide airhead who might not actually be from another planet instead of the Kansai region. Because of this, she also presents a ‘unique way of thinking’, as it’s referred to in the show, which is the source for a lot of comedy in the Show.

Another idiot, Tomo’s known for being loud and rambunctious with little else to her name. Saying she’s not particularly smart would be a compliment and she has no real athletic ability to speak of, but somehow her friends keep putting up with her. Tomo’s childish and obnoxious antics are probably the most high octane the show gets, although they’re always enjoyable too.

Kiyomi ‘Yomi’ Mizuhara might be the least popular member of the group with fans, but she’s an absolute gem. Yomi’s known Tomo Takino since they were both young kids and despite Yomi’s wishes they keep ending up together. Having opposite personalities, Yomi’s pretty smart but she’s also quickly irritated.

You could call her the rational one of the group. Though, she’s maybe a little too worried about her weight sometimes.

Sakaki’s tall, Sakaki’s quiet, and she’s one of the top athletes in her school making her something to behold.Not only do they respect her but, lots of the other girls at the school like Kaorin even crush on her because of that cool image. Truth is though, she really likes animals and cute things and wishes she could express that better.

She really wants a cat.

Kagura’s another one of the numbnuts, but at least she’s got athletic ability to her name. She thinks of Sakaki as a rival, constantly trying to outdo her in sports and staying oddly silent when it comes to her test stores. She only joins the rest of the class during their second year of high school after Yukari secretly drafts her from Nyamo’s class just so they can win the sports festival.

If there’s any unfortunate member of the bunch it’s Kaori, who’s overly obsessed with Sakaki to the point of needing help, sometimes referred to as Kaorin. She herself though is the object of Kimura Sensei’s obsession, which we’re pretty sure is illegal. She actually gets demoted as the show goes on from ‘one of the gals’ to ‘transferred out of the class and rarely seen again’.

Possibly an even bigger idiot than Tomo, you worry for the girls and how they’ll fare after graduation with Yukari Tanizaki as their home room teacher. An alumnus of the same high school she teaches at, Yukari justifies her employment via her ability to speak fluent English when she has to.

While she’s the type to fall asleep at her teacher’s desk more often than not, she’s struck up something of a friendship with the girls and accompanies the entire group on their yearly summer vacation to Chiyo’s summer home.

Minamo ‘Nyamo’ Kurosawa is the gym teacher at the school and like Yukari she too graduated from where she works. Unlike her boisterous coworker, she takes her job much more seriously and tries her hardest to be a good role model. Unfortunately her defenses break down quickly when alcohol is introduced, with one of the series’ most memorable moments being when she downs a whole bottle of Sake at the summer beach house.

If there was a contest for ‘which Azumanga Daioh’ character most belongs in jail, Kimura Sensei would top the list without a doubt. Sure here’s nervous and he’s awkward, but he’s also very open about his fondness for High School Girls and most specifically Kaori, who he calls Kaorin against her wishes. Somehow he has a beautiful wife who cares about him deeply, referred to as a saint by the girls for putting up with the man.

Azumanga Daioh Has A Cat Or Two…

Azumanga Daioh has a thing with cats, whether they be real cats or figments of the girls’ overactive imagination. You have the cat who Sakaki sees on her morning walk to school. She stops to try to pet him every time but he always bites and bites her.

Then you have Chiyo-Chan’s dad! A deformed yellow cat who appears in Sakaki’s dreams who you’re pretty sure isn’t real but you can never really tell. Finally, Sakaki gets a cat of her own after visiting Osaka with a wild one following her home after the trip.