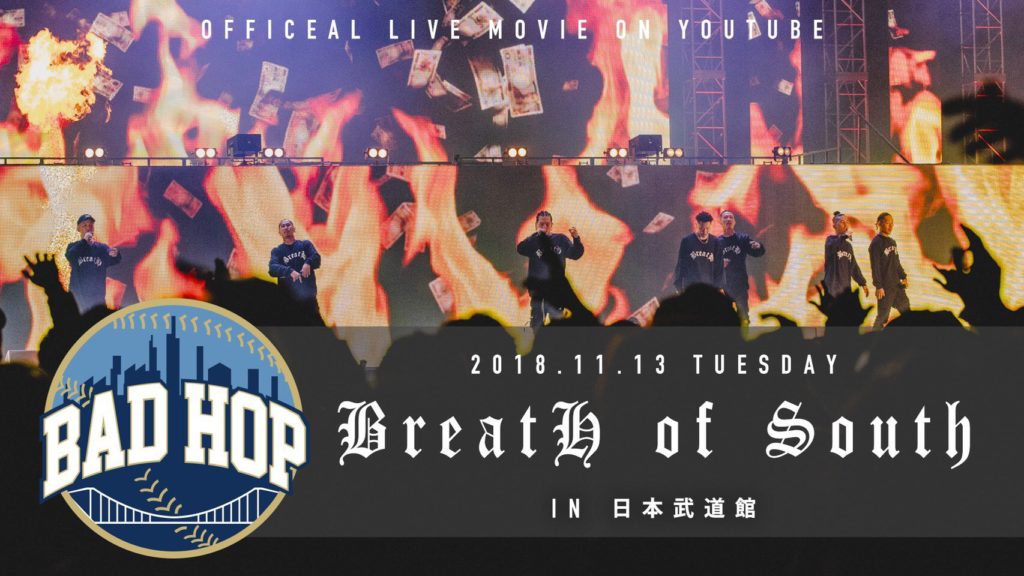 A few days ago, T-Pablow took to Twitter to ask fans if they would be interested in watching a full version of the group’s Budokan performance on YouTube—saying he wanted to do something fans could enjoy from home since Japan’s stay-at-home orders were extended. He was met with an overwhelmingly positive response and quickly moved to discuss things with the crew’s staff.

After releasing a free mixtape titled “BAD HOP 1 DAY” in early 2016, BAD HOP made a remarkable climb to the top of the Japanese rap game. They soon came to the attention of major Japanese media outlets—with a feature in GQ Japan in 2017. Their first full-length album, Mobb Life, reached first place on the overall iTunes chart when it dropped in September of 2017. By early 2018, BAD HOP was selling out major venues in Tokyo.

Continuing to gain momentum, the crew decided to hold their largest performance ever at the end of 2018. BAD HOP tackled the 14,000-seat Nippon Budokan on November 13th, 2018. Tickets for the Breath of South performance sold out within three hours, despite the show being held on a weekday.

The title “Breath of South” pays homage to the crew’s roots. Located just south of Tokyo, Kawasaki is a city whose residents have long struggled with the effects of air pollution from its many factories and motor vehicle exhaust. The heavy industry in the city is clustered on the South side of Kawasaki where the BAD HOP crew grew up—hence the title Breath of South.

The live will only be available for a limited time so don’t miss out!