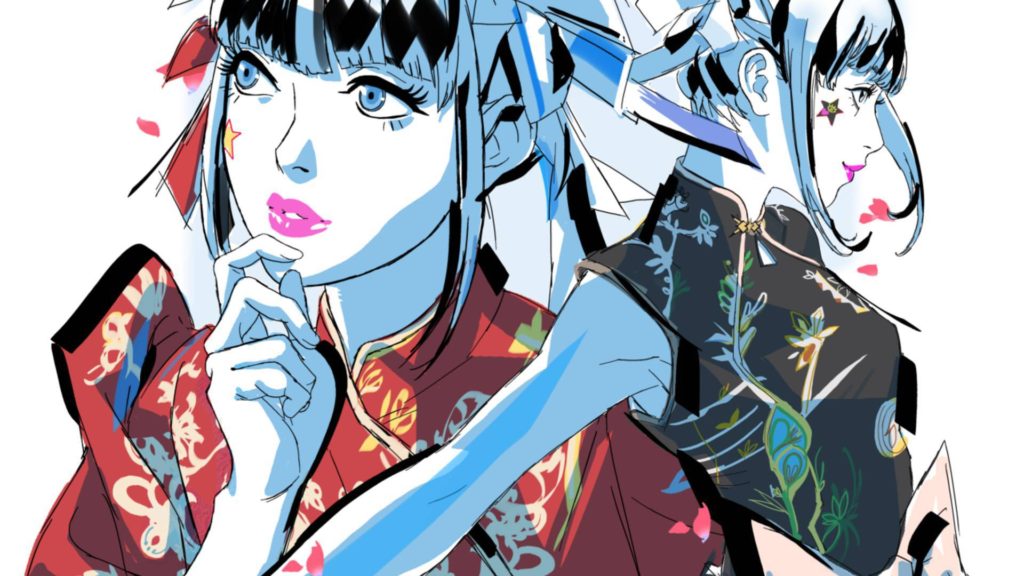 When it comes to interviews that I’ve been dying to bring to life since the very conception of OTAQUEST, formally exchanging words with rapidly rising animator Bahi JD was definitely somewhere near the top. There’s not a single day that passes that I don’t learn something new about the Austria-born creative and having the chance to further develop on everything I had already discovered was something I couldn’t help but desire. If you don’t quite know his name yet, I can only hope that changes soon.

With an entire catalog of work that can be found in series such as One-Punch Man, Space Dandy, the more recent Blade Runner Black Out 2022, and an ever-developing list of different titles, he’s a powerhouse force that won’t be disappearing any time soon.

There’ are a lot of different reasons to appreciate his work as a creative, from his self-made position in the industry, to his persistence in everything he does, Bahi JD wins us over in every regard.

That’s why we’re so excited to bring you this interview with Bahi JD!

Bahi JD: My name is Bahi JD and I’m an animator from Austria who is currently working in the Japanese animation industry. You’ll sometimes see me working in the field of illustration too.

I’ve always been fascinated by the world of animation; as early as my school years, I’d constantly be scribbling in my textbooks to create small flipbook-style animations. Perhaps the point where I found myself completely captivated by the world of animation, however, was when I discovered the animators behind some of my favorite titles. Classics such as Princess Mononoke, Akira, Mamoru Oshii’s Ghost in the Shell, The Iron Giant, FLCL, and a long-list of others had an extremely strong impact on me.

The discovery of these animators eventually leads me to an article about an animator called Ryo-Chimo who utilized an unfamiliar tool to me at the time: the digital-drawing tablet. Ryo-Chimo was especially noteworthy due to his online-postings of his works, and his eventual breakthrough into the animation industry. It was after this I decided to pick up my own digital-drawing tablet and began practicing animation for fun. It was at this time that I also got in contact with other animators through the internet to ask for their advice: animators such as Cindy Yamauchi, Keisuke Kojima, and Majiro are the first to come to mind.

I made some gif-animations and sent them to anime producers, but it just wasn’t enough to land me a job. I was undeniably rejected quite a few times.

Cindy Yamauchi gave me some particularly good advice on the aspects I would need to improve and further develop. It’s not just about being a good animator, it’s also about having strong and flexible drawing skills. You have to show you can draw anything in any style, and you need to be capable of drawing good layouts, which is perhaps one of the most important aspects. During this time I had no idea what ‘layouts’ were, so I picked up and studied a book called ‘Studio Ghibli Layout Designs.’

I kept working on my portfolio and would send it back and forward with Cindy Yamauchi, who at the time, was working on a new TV series. She showed my works to the director and producer of the company, and eventually I was hired to work on Shinichiro Watanabe’s Kids on the Slope. It was at the same time that director Takuya Hosogane approached me to animate for his Vocaloid music video alongside Shingo Yamashita and Ryo-Chimo.

In those early days, there was a lot of trial and error involved for me, but the director, producer and animators were very supportive. It was during my learning process that they taught me a lot of different aspects of anime production, and it’s for that I’m very thankful.

When I was a child, I grew up watching various Nippon Animation productions such as Peter Pan no Bouken and Heidi. Later on in my teenage years, however, I would go on to discover Akira, FLCL, Ghost in the Shell, and a number of Studio Ghibli films, all of which influenced me. I also enjoyed the animation within works such as Gurren Lagann, Dennou Coil, Cowboy Bebop, and held Samurai Champloo in particularly high regard, especially due to its incredible soundtrack by Nujabes and Tsuchie.

With all that being said, there was still a lot of anime that didn’t make it to the television. Those are the series that I discovered through both my friends and the internet. I think with the internet, there’s even more of an anime scene all over the world now.

Being both a fan of Blade Runner and Watanabe Shinichiro’s works, I was definitely excited to work on the short. We had an entire meeting at Cygames Pictures where Shinichiro Watanabe showed me the storyboard, and we discussed which scene I’d like to work on. I animated the scene where both Trixie and Iggy are fighting the guards. The scene was split into two parts; the first part was animated by the legendary Hiroyuki Okiura, and the second part was my own work.

It was a great pleasure to work with Shinichiro Watanabe and his team. The character designer Shukou Murase is one of my absolute favorite character-designers. The soundtrack by Flying Lotus was also really great. He captured the atmosphere of Blade Runner meticulously, all while adding his own touch to it.

Shinichiro Watanabe had a rough storyboard for my action scene, though since it was a rough storyboard, I had a lot of room for new ideas. He allowed me to change up both the action and choreography, as long as it followed the continuity of the other cuts and worked well. You’re always able to try new things during layout and show it to the director for approval.

The choreography was a real challenge for me, I hadn’t animated any scenes where a single character is pitted against a lot of others before this. I ended up researching a whole bunch of martial arts videos as preparation for the choreography.

When characters are fighting, you try not to make your choreography look ‘choreographed.’ Making it look natural, that’s always the main challenge. I wanted the audience to be able to follow the action without issue; when there’s a lot of characters on screen it can become hard to follow during fight scenes. I started very roughly with the drawings, almost like a storyboard while planning the action.

Regarding the question about fluid motion and dramatic reaction, to give an example: when Trixie jumps for a kick, I slow down the action to allow time for the motion of the leg to build up energy. In animation, we call this ‘anticipation.’ This way when it snaps super fast, you have the reaction. You can tweak these actions by experimenting with both the ‘timing’ and ‘spacing’ of slow and fast motion.

I was honestly impressed by everyone’s work on the short film. Especially the cuts by Hiroyuki Okiura, Shinji Hashimoto, Shinya Ohira, Tatsuyuki Tanaka, and Mitsuo Iso.

Every time Hiroyuki Okiura finished a cut, I would ask the producer to let me take a look at it. I’d sit there for an entire hour just staring at each and every frame. His work is absolutely brilliant, and extremely educative. His sense for realism is incredible, and it’s totally his own imagination and skills. He doesn’t use any reference, so when you look at it, you can truly learn the technical work of a master.

It was also nice to have Tatsuyuki Tanaka on the project. More recently, Tatsuyuki Tanaka’s mostly been active as a director, illustrator, and character designer. As a fan of his work, I was definitely excited to see his key-animation again. He’s a very strong animator, and also worked on Akira when he was only 22 or 23.

Shinya Ohira is someone with the ability to be both stylistic and realistic at the same time. He has extremely high technical skills, and a great artistic vision. On top of that, he manages to balance those two traits well. His work is emotional, expressive, and dynamic. His scene in Blade Runner is a flashback to the past, where I felt he captured the feeling of that ‘memory’ very well with the rough artstyle and animation.

I met him one time at Comiket at an animator booth with Yoshimichi Kameda and others. At Comiket, there’s a lot of different animator booths, and you can find sketchbooks, art books, and flipbooks by a number of great animators such as Mitsuo Iso, Shinya Ohira, and Yutaka Nakamura. I recommend checking out the animator booths if you ever go to Comiket, the art books are great.

I’m more than happy a great director like him continues to work with me. It’s always a pleasure, and I learn a lot each time I work with him. He also allows me to be very expressive when working on his projects.

I’m just a fan of the projects, and of the people who end up working on them. I like to work on projects where I can learn a lot as an animator from the team members. These kinds of projects can be very challenging, so it’s always exciting and interesting.

That’s a hard question. I’ve not been in the industry for a very long time, but in the time that I have been here, I’ve seen much improvement over the years. I see a good future for the anime industry, and things are improving step by step.

Young animators in the industry are very passionate and are improving every single day, so I think there’s going to be a new wave of big-name animators in the future. More generally, the people here work with strong passion and enthusiasm. They love to animate together, and it’s this strong passion for animation amongst these young creators that gives me hope we’re heading towards a promising future.

Learn the Japanese language, communication is very important. There are English speakers in the anime industry, but they aren’t always going to be there when you need to communicate with everybody.

Thank you for all of your support, and thanks for appreciating animation!

Jumping over numerous hurdles presented by the industry, Bahi JD is a name we’re certain to see for years to come. He’s a creator with clear inspiration, but also someone unafraid of paving his own paths, and we can’t wait to see where he goes next. If you’re interested in checking out more of his works, you can find him on both Twitter and Tumblr where he frequently shares what he’s working on, as well as sharing glimpses into the life of an animator.