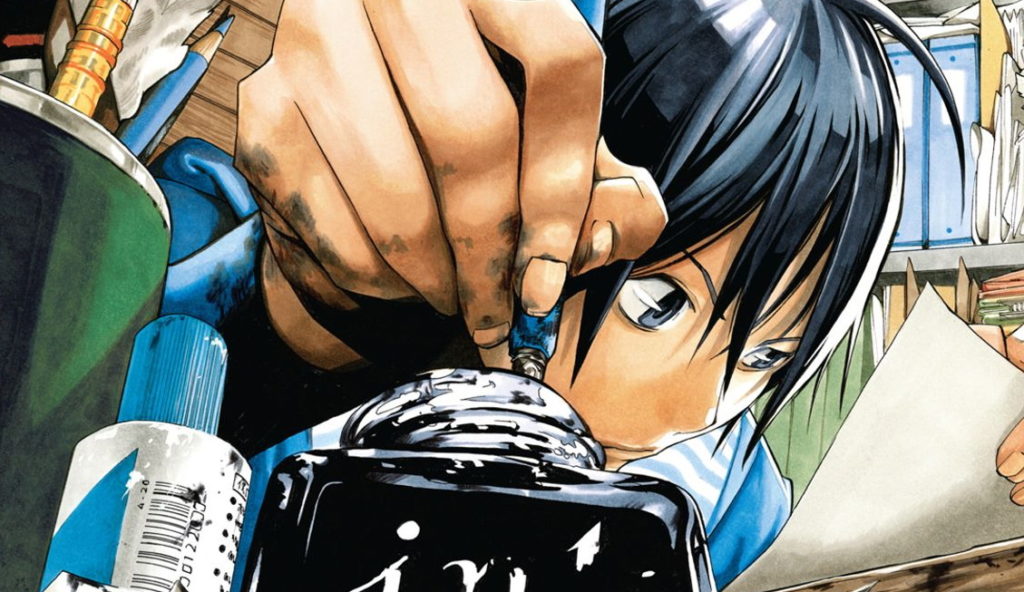 2019 has drawn to a close, bringing with it an end to the 2010s as a whole. It’s around this time that we begin to reflect on the past, where we’ve come from and where we might be headed from here on out. For me personally, this decade has been pretty mental. Not only did I (technically) become an adult, move out of home and even live in Japan for a while, I also managed to fulfill my lifelong dream of becoming a professional writer – life has a funny way of working out sometimes. But even throughout these myriad changes, one series has always been by my side: Tsugumi Ohba and Takeshi Obata’s Bakuman.

Now, some of you may scream bloody murder at the fact that the Bakuman manga actually began in the previous decade, August of 2008 to be precise. But it did eventually finish its Weekly Shonen Jump run until April 2012, and I did not come into contact with the series until at least 2013, after the third season of J.C. Staff’s anime adaptation had already aired. Plus, the series didn’t start to enjoy much of a presence in the west until after 2010, when the first volume of the manga was translated by VIZ Media and the first season of the anime hit (at that time, mostly illegal) streaming sites.

This latter avenue was how I discovered and consumed Bakuman for the first time, and despite the passage of time, the impact it has had on me as a person has not lessened over the years. In fact, reading the original manga for the first time last summer only cemented its place as one of the most important and influential series in my creative and personal life. Today, I’d like to share some of the reasons why.

Creativity and Passion: The Bakuman Story

Firstly, the story of Bakuman – high-school students Moritaka Mashiro and Akito Takagi struggling to become successful mangaka – was one that resonated with me greatly when I consumed the anime for the first time, at the age of 14.

Already, at that point, I had gotten it into my head that I wanted to do some sort of job in the creative field. I didn’t want to become a mangaka like Mashiro and Takagi (art has never been my strong point) – directing films was what I had actually set my heart on doing – but seeing characters my own age struggle to achieve their dreams was inspiring to say the least, regardless of their profession.

I can’t help but think that my experience, in this respect, isn’t so unique. Given that Bakuman was serialized in Japan’s biggest manga magazine, which is consumed by millions of children and young adults up and down the country, the series had a wide, impressionable audience that it could easily influence and resonate with. Perhaps that’s why it has spawned such a massive multimedia franchise: three seasons of anime, two live-action movies, and even a Nintendo DS game.

Yet, the fact that it was published in Weekly Shonen Jump, out of all of the other manga magazines out there, is particularly important. As Jason Thompson put it, “This is a manga about the Shonen Jump slogans of yûjo (friendship), doryoku (perseverance) and shori (victory).” Never has a series been so suitable for, and crafted with the Shonen Jump audience in mind.

Even so, before coming across Bakuman, I had no idea what Weekly Shonen Jump was, let alone what its slogans might be. For me, it was more about the visceral emotions that came about from seeing the two young protagonists grow and develop in their career that inspired me in my own creative pursuits.

It just so happened that, at the time, I was in the midst of trying to create a short film for a competition of sorts, and while other sources influenced me greatly (Christopher Nolan, Guillermo del Toro, the regular sort of things a teenager in 2014 would’ve liked), I could never quite get the idea of replicating Mashiro and Takagi’s journey out of my head.

Part of this was because I was creating this short film alongside another guy, who I won’t name out of respect. We’ve since fallen out of contact, but I couldn’t help but think of the times that Mashiro and Takagi spent together in Mashiro’s uncle’s studio, coming up with ideas and struggling against deadlines when we too sat in an empty classroom coming up with scripts, drawing storyboards, and making stupid editing choices. 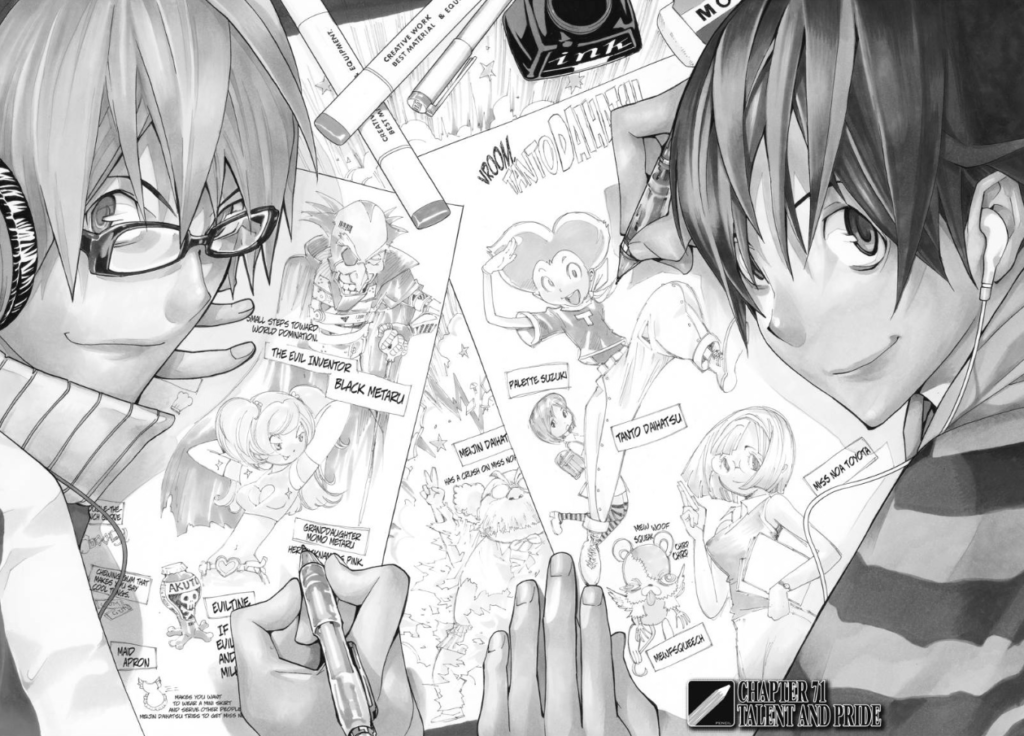 But even now, having given up on the idea of making films (heck, I don’t even watch films anymore) and having made writing my passion, whenever I’m working late – coffee by my side and struggling against a deadline – I can’t help but think of Mashiro and Takagi doing the same, and feel just a little vindicated because of it.

Then again, there’s plenty of elements of Bakuman that I haven’t tried to replicate. Mashiro and Azuki’s fairytale romance isn’t something I’ve ever had the desire to try for myself, nor pushing myself so hard that I end up hospitalized. Fiction is fiction and should often remain that way, but the influence it can have on our everyday lives cannot and should not be ignored.

A Love for Manga: Industry Insight

In any case, if the inspiration I drew from the story of Bakuman relates more to a phase in my teenage life that has since passed, there’s a more pressing way that it has influenced me in my adult life: forming a fascination with the manga industry that has since become the main way through which I earn a living.

As I said, I came to the Bakuman anime with almost no knowledge of Weekly Shonen Jump or, for that matter, the manga industry as a whole. Even though I had watched many episodes of the Naruto anime and other big Jump tentpole series, I had no idea that these all came from one eminent magazine, produced by one domineering publisher.

Nevertheless, Tsugumi Ohba and Takeshi Obata are brilliant educators. The way that they deftly weave production drama into human drama is something that no other series has ever quite replicated. (Shirobako came close.) While what initially draws us in is, no doubt about it, the charismatic characters, what becomes even more fascinating very quickly are the multiple insights that the series offers into the manga industry and how it works. 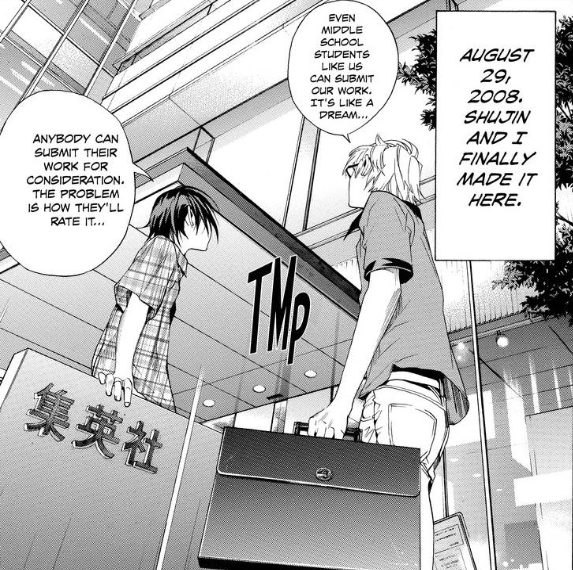 In the first place, the way that Ohba and Obata transform the trials and tribulations of creating a manga into a sort of battle manga is endlessly entertaining and incredibly informative. The decision to ditch storyboards and allow Mashiro to draw directly from Takagi’s scripts, for example, is treated with the same level of gravitas as Pain destroying the Hidden Leaf Village and has just as many repercussions: it is what allows the mangaka duo to finally reach the same level of finesse and polish as their long-time rival, Nizuma Eiji, and inch one step closer to their dream of becoming successful mangaka.

While much of the creative process has, in this sense, been embellished and heavily dramatized to make for a good story, it does bring to the viewer’s attention the fact that writing a story week in, week out isn’t as easy as it seems. This fact, in particular, has always fascinated me greatly: how do authors keep up the pace and quality on such a regular basis? Without Bakuman to pose this question, I suppose I wouldn’t be doing things like my weekly manga recap column, Your Manga Week, or examining series as they grow and develop.

In any case, there’s a level of realism to Bakuman that is clearly informed by the creators’ own positions as successful mangaka (don’t forget that Ohba and Obata already had Death Note under their belt by this point). Aside from the series’ sheer attention to detail in setting, process and tools (who knew what a ‘G Pen’ was before this?), perhaps one of the most famous aspects of this realism is the fact that most of the fictional manga artists and authors that appear in the series are based on real people, or at least share similarities with real-life counterparts.

Nizuma Eiji is no doubt meant to represent Eiichiro Oda of One Piece with his boundless creativity, and there’s surely no equivalent to Kazuya Hiramura’s bizarre sense of humor than Gintama’s Hideaki Sorachi. What’s more, many of the editors that appear in the series are more or less direct representations of real Shueisha staff – former Weekly Shonen Jump chief Hisashi Sasaki still uses his likeness from the series as his profile picture.

While I’ve never been too comfortable with idolizing creative figures and especially mangaka in this sense, many of whom prefer anonymity to public fame, the way that Bakuman’s realism offers us a peek behind the curtain is, in this sense, endlessly fascinating.

But that’s not the only way that Bakuman offers us a peek behind the curtain. One of the series’ most long-lasting legacies, at least in the west, has been the proliferation of the Weekly Shonen Jump survey system in the public consciousness. 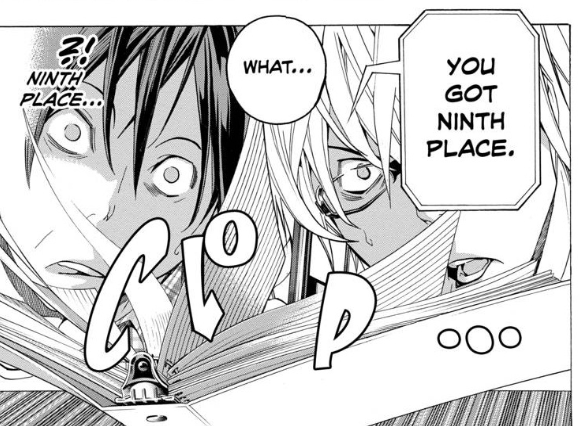 In the series, the survey rankings are God. Every week, Mashiro and Takagi wait eagerly for the results and often make life-changing decisions based on them, such as abandoning the successful but low-ranking Run, Daihatsu Tanto!. It’s also implied that ending up with a low rank leads directly to eventual cancellation.

In reality, survey rankings are but one of many factors that enter into the equation. Volume sales, multimedia marketing, and the current line-up of the magazine are all taken into account when deciding whether to ax a series or not. Confounding the problem is, of course, the fact that the table of contents doesn’t necessarily reflect a series’ ranking in the reader surveys; the public isn’t party to the data collected by Shueisha. That’s why something like Samurai 8 can continue on for so long despite its low place in the table of contents: it might actually be doing quite well in the survey rankings, and having a Masashi Kishimoto manga serialized is seen as a beneficial marketing ploy by Shueisha. No dice on the volume sales, however.

But the reality is never as exciting as fiction, so you can’t exactly blame Ohba and Obata doing this. It was, in turn, the fact that the authors made the process so exciting that the series so important: it turned a whole generation of fans onto the fact that there was an entire industry surrounding the stories they love. In times gone by, this knowledge was only available to a handful of experts and academics (Frederik L. Schodt did a lot of pioneering work in the 1980s to this respect) but it was Bakuman popularised this knowledge, brought it into the public consciousness and, above all, made it fun.

The effects of this on me personally are plain to see. While the series may have initially influenced me on an emotional and creative level, its meditations on the manga industry were what made me curious about the medium in the first place. Although I didn’t get the chance to act on this curiosity until I went to Japan for the first time in 2018, where I discovered the world that Bakuman was describing in bookstores and conbini, without Ohba and Obata’s series, I wouldn’t be where I am today. That’s how it shaped my decade and changed my life.

You can read Bakuman for free via VIZ Media’s Shonen Jump.