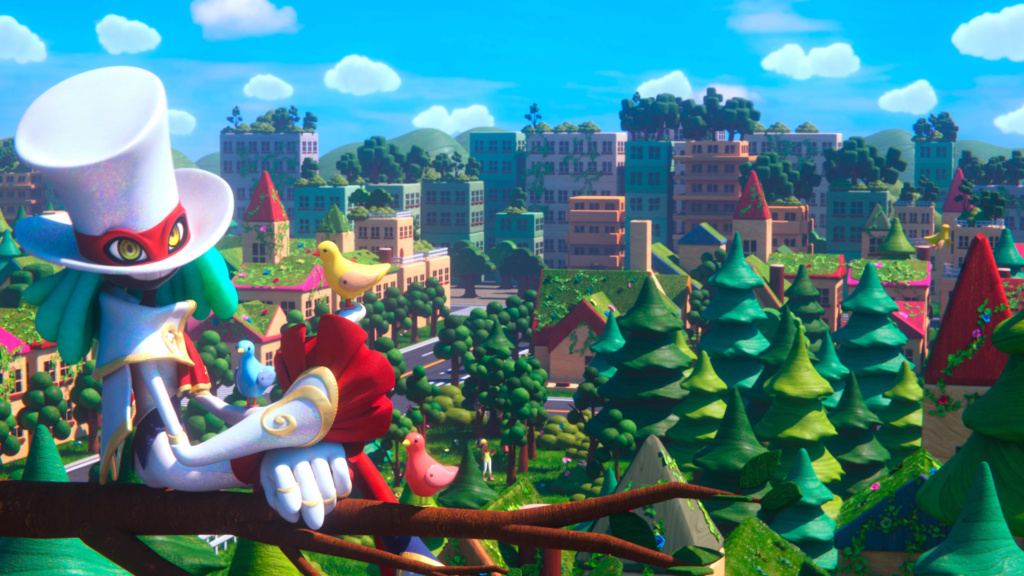 Why Did Balan Wonderworld Fail? The Overlooked Novel May Have the Answers

Did you know there was a Balan Wonderworld novel? It’s fine if you didn’t. Until just over a week ago, I was the same.

As much as I tried to be positive in my impressions on the game’s demo, the finished article of Balan Wonderworld is not a fun game to play. The brief moments of joy in the game’s wonderfully-animated cutscenes, bizarre end-of-world musical numbers and the Tims remain small highlights in an otherwise disappointing experience.

When you have talent like Yuji Naka working alongside long-time collaborators, it can be difficult to understand what went wrong from the outside looking in. There are easy scapegoats, but blaming them would distract from the game’s more deep-rooted problems. The mostly-overlooked Balan Wonderworld novel goes someway towards explaining why a world and setting with so much potential ended as a critically-panned sales flop.

And it may even provide the answers to what went wrong. 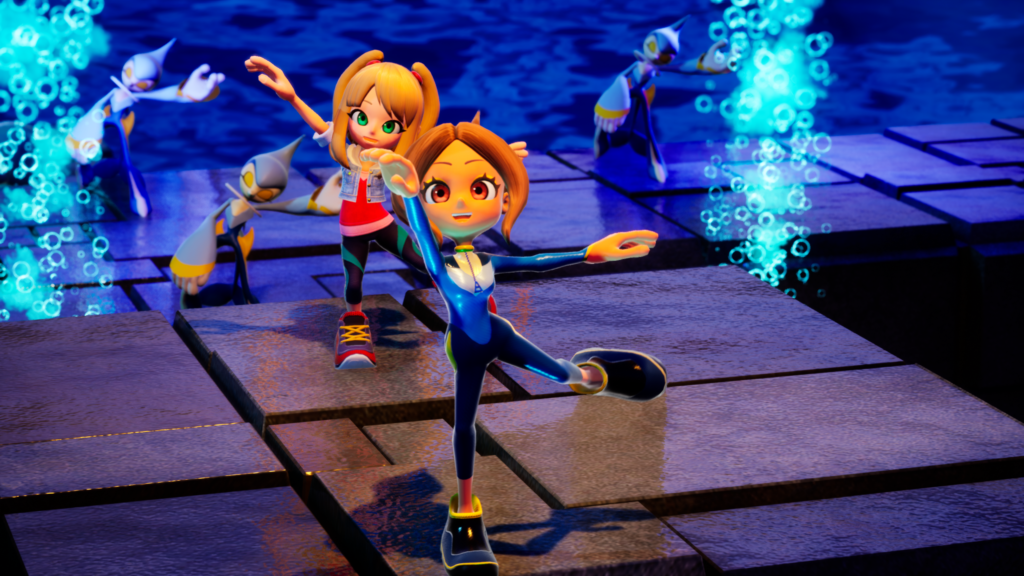 Balan Wonderworld explains very little to the player. Following an impressive opening cutscene where we see our main character (Emma or Leo depending on who you choose) enter the Balan Theater, we’re rather unceremoniously dropped onto the Isle of Tims and expected to dive into these levels. No dialogue or explanation discusses why we’re entering these worlds, and we aren’t even introduced to that world’s character until just before the boss.

That’s not all. Giant character models appear in random places around the levels and disappear if you get close, while strange black enemies burst from the ground to attack unprovoked. There’s also this shadowy evil figure, but other than being the main evil character, we aren’t told anything about who they’re supposed to be. We’re playing blind, parsing our way through levels confused about our purpose.

The Balan Wonderworld novel gives meaning and explanation to so many events that it begs the question as to why this content never made it into the final game. For a title without dialogue, the novelization is over 200 pages in length, most of it original content exclusive to this story. The context it provides immediately makes the game more enjoyable simply for understanding what is supposed to be happening. 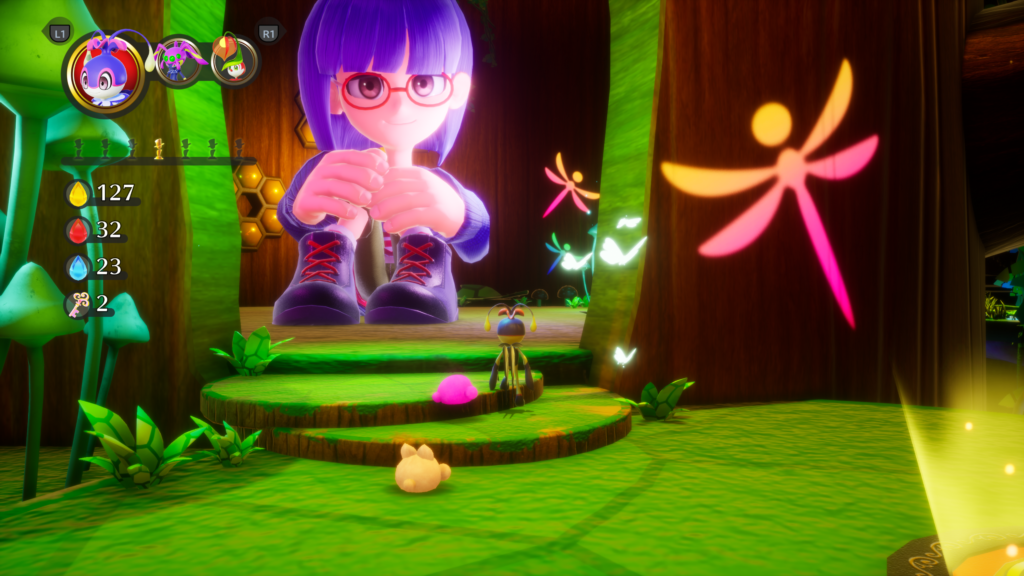 Over half the novel is set before the events of the game where we learn about the characters and Balan Theater. Emma and Leo have titles within the theater just like other characters, these being Fighter and Streetbeat, and the theater is a place people enter following traumatic events and when they are depressed. In these moments of self-loathing, the Theater is there to help.

The purpose of the theater was to help restore balance in people’s hearts. While it didn’t exist to solve their problems, the Theater promised a Wonderworld they could form that would help them overcome it. The creatures like the Tims have a role in this, as they could feed on tears (gems in the game) to produce happiness and improve the balance in a person’s heart.

In this pre-game state, these areas are interconnected, and the conductor isn’t Balan but the game’s villain, Lance. They lock away the former memories of those in Wonderworld and encourage them to build a paradise they would never want to leave. The characters, too, enjoy their time with one another, and we learn lots about the personalities of the stage custodians in the novels that is otherwise never explored. 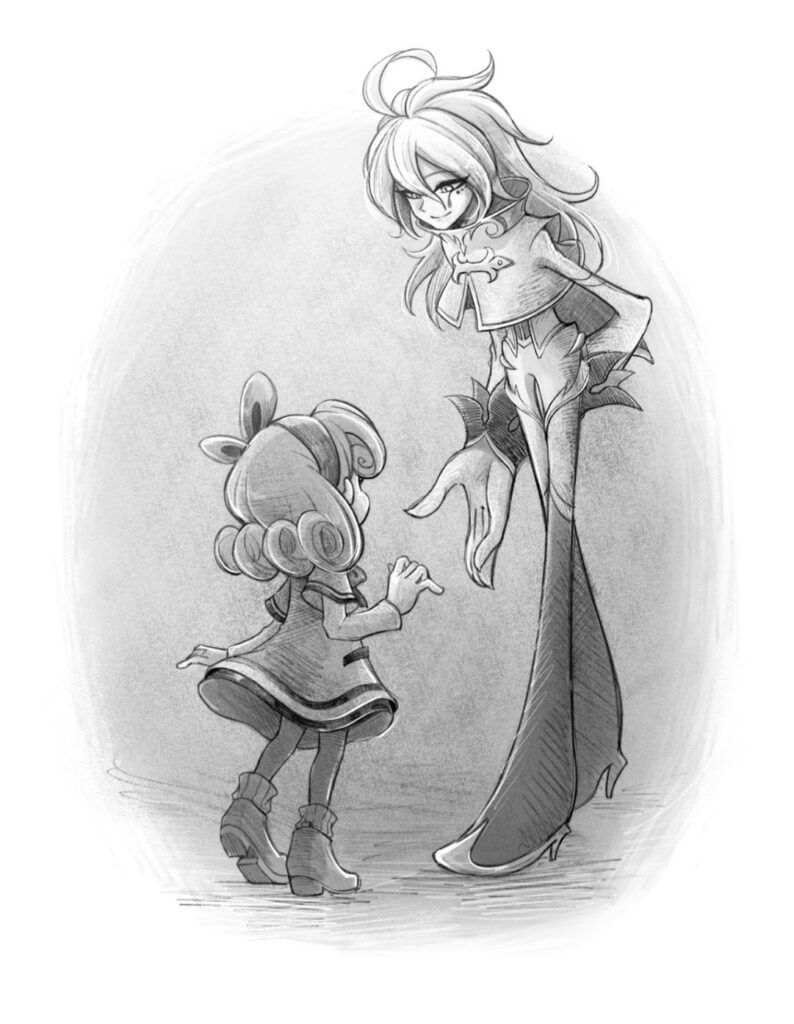 Lance wants to keep spending time with the friends he’s made. When they think of meeting Balan after they all see visions of him, he tricks them into thinking they must defeat him by embracing their negativity. Rather than overcoming their trauma and depression, it defines them, and they become the monster inside.

Except for Streetbeat. The depression that brought him to the Theater was a loneliness and inability to make friends that Wonderworld already helped him overcome. He isn’t effected, and after talking to Balan, vows to save his new friends. That’s where the game begins, and the novels speeds through the salvation of each character.

However, the Balan Wonderworld novel doesn’t end where the game ends. After defeating Lance, they leave the theater to their own time period and lives as though they were never gone. Thanks to the theater they overcome their trauma and vow to see one another again, and we learn about their lives afterwards before they finally reunite. 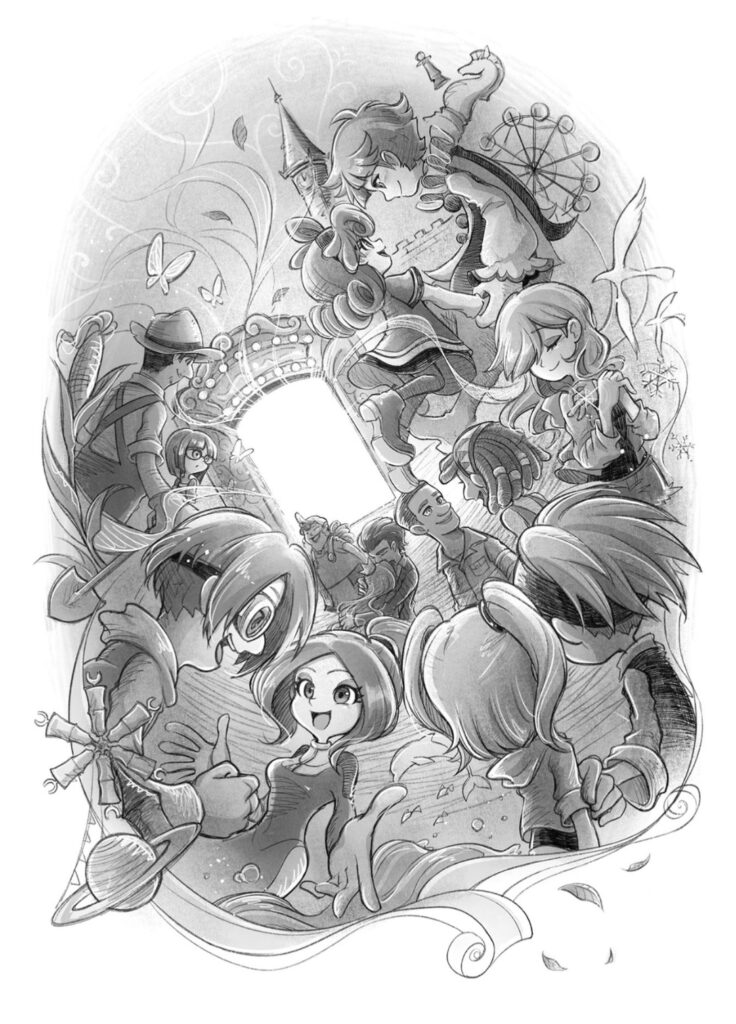 Some of these characters had to overcome worse situations than others. The Checkered King lost his chess career as his obsession left him unable to notice his wife’s worsening illness. Her death sent him to Wonderworld. Others like Bugsy suffered intense bullying, while Lady of the Midnight Sun lost both her parents and turns into a monster known as the Grim Creeper. But they all grew as people and moved forwards from it.

I won’t say the novelization is good. It explains a game badly in need of context and exploration, but it’s structurally poor and unnatural to read. The heavy dialogue makes it read like a hastily-adapted unused script, while it feels more like the outline for a game structured far differently to the one we received, as opposed to a novel. 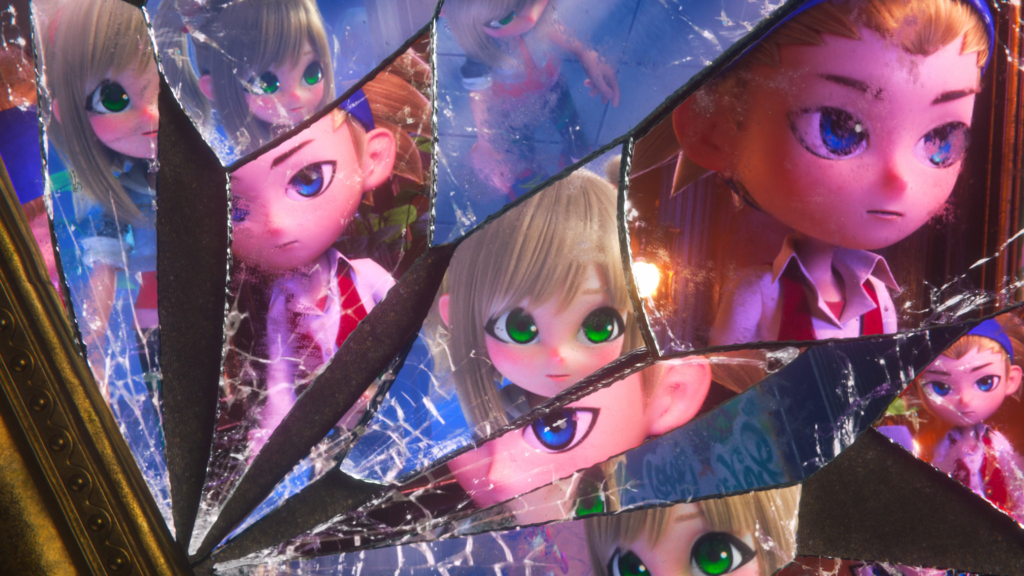 While the novel doesn’t suggest an easy fix for Balan Wonderworld, it does indicate that something better was hidden within the original concept. Even adding a small amount of dialogue from this book would help us to empathize with characters as we play, which is sorely needed and feels nonsensical without it.

Unfortunately, the book improves the story while exposing how fundamentally flawed Yuji Naka’s creation is. Framing a children’s platformer around trauma with the ultimate message that it’s ok to seek help is a genuinely uplifting and important message. But the novel glosses over the action of the game in a way that implies a lack of ideas for how this translates into a fun game.

When reading the Balan Wonderworld novel, I can picture a more interesting level-based experience that starts in the pre-corrupted worlds before revisiting their corrupted states in a character-driven story. While the fact that the novel’s story is repeated on the game’s official website in contradiction to elements of the game that suggests it exists as a blueprint, this suggests the game was dramatically scaled back. Even then, only transforming costumes are mentioned in the novel, with no ideas on how to make a fun game around that.

A short COVID-impacted development of less than 3 years won’t help, either. 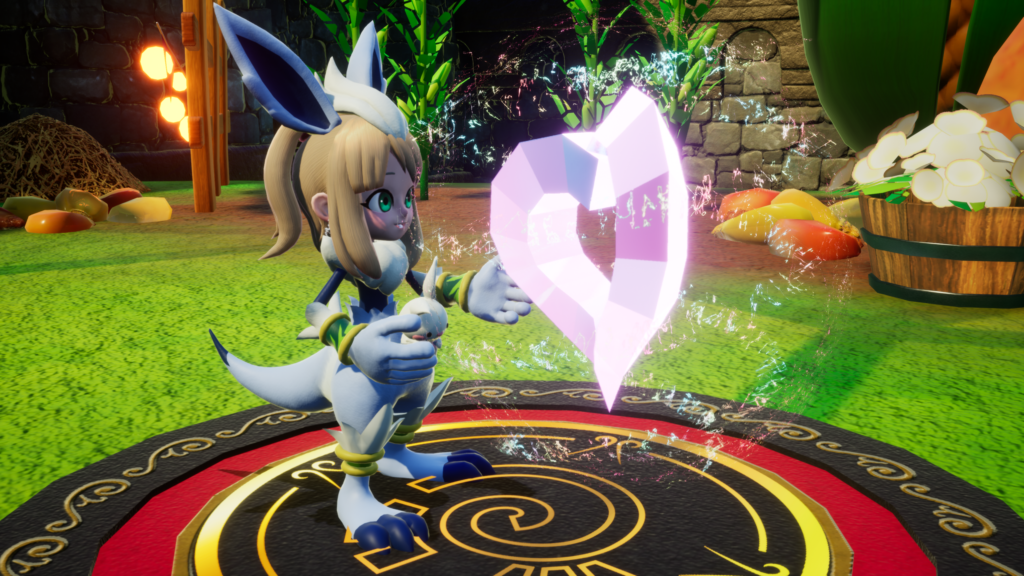 Where the blame lies for the game’s struggles is difficult to decipher. Yuji Naka’s recent track record is plagued with games whose final products seem to mask more ambitious ideas. Even the messy release of Rodea the Sky Soldier, marred by a poor externally-produced Wii U port that overshadowed the enjoyable Wii experience, isn’t free of this. Characters and world details are dropped without explanation, and the few public pieces of concept art and an early trailer showcase a world filled with mysterious invasive clock towers, expansive towns and story ideas missing in the final game.

Yuji Naka has built a career on engaging characters and worlds, and somewhere along the line he lost his ability to realize these ideas. The problems with this game aren’t technical, but exist by design. Implementing the interesting world established in the novel won’t solve a game insistent on simplified 1-button controls and costumes that often repeat themselves and are sometimes so limited you can’t jump. 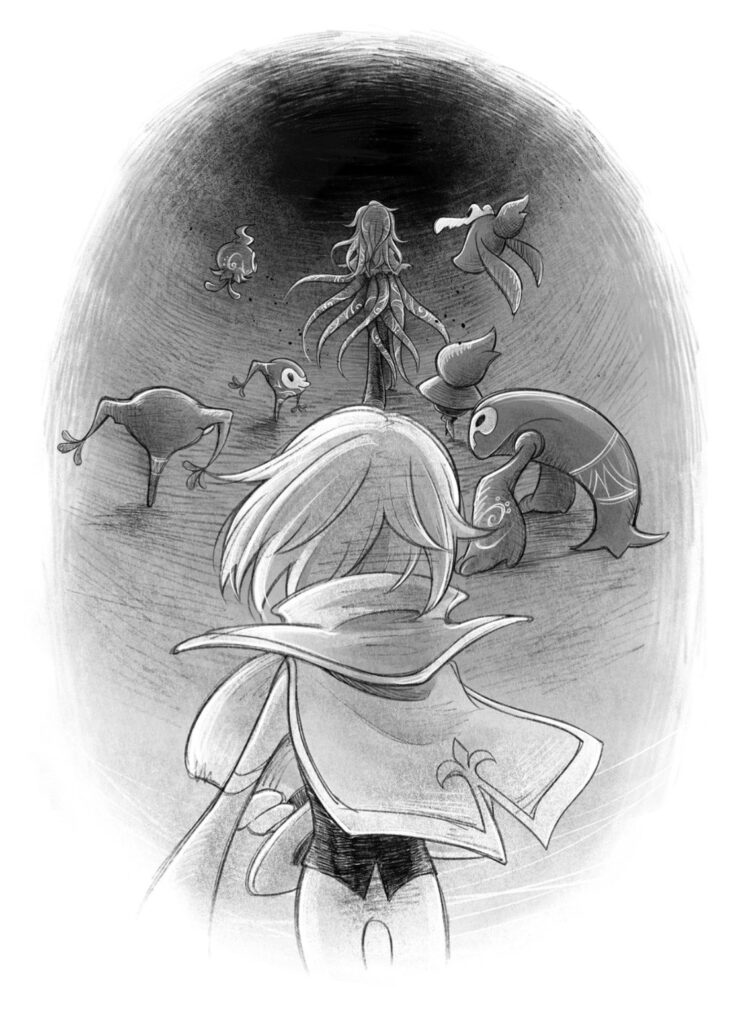 The Balan Wonderworld novel is a blueprint, but creating a good game from it requires a structural redesign from the ground up. And the question remains whether Yuji Naka can once again create a world as interesting as his ideas. Or if he’ll even be given another opportunity to do so.

Yuji Naka and The Birth of a Blue Legend