OTAQUEST was lucky enough to attend AnimeNEXT in Atlantic City, New Jersey, this past weekend. North American conventions always have a unique energy and sense of comradery that’s different from Japanese events like Tokyo Anime Festival or Comiket. One of the most notable guests, or groups of guests, were staff members from Studio MAPPA who were instrumental in making last year’s hit Banana Fish. Director Hiroko Utsumi, character designer Akemi Hayashi, Supervising Animation Director Ayumi Yamada, Setting Producer Erika Ando, and Production/Planning Coordinator Andrew Upton held the panel, with the assistance of an interpreter provided by the con. We got an inside look at Banana Fish and the challenges involved with adapting an older manga as well as some perspective as to how to make an anime that takes places nearly entirely in New York City.

Needless to say, this feature will have a lot of spoilers.

Banana Fish started serialization in 1985 and finished up in 1994. A lot has changed in New York City since then, and the animation team at MAPPA were determined to modernize the story for today’s audience. The first thing the team covered at the panel was background modification. The director Hiroko Utsumi, who also directed the first two seasons of Free!, talked a little about her adventure to New York City. She and her team scouted dark alleys to use for gang violence and snuck around a lot of open spaces. Some of the buildings and scenery that were present in the original manga were no longer present, so it was important for Utsumi to have the anime portray a realistic New York City. She said they specifically used Nom Wah Tea Parlor in Manhattan’s Chinatown as the basis for the fictional Chang Dani restaurant.

The character designer Akemi Hayashi, an industry veteran of many years, then detailed how she updated the character designs for the anime. They gave characters fluffier, more realistic looking hair because it fit the style and made the animation look better. Hayashi then talked about the drastic changes to the character Shorter who was bald in the original, and in 2018’s Banana Fish, has a purple mohawk. They wanted the character to have a more masculine facial structure and gave him abs so he’d be better looking than he used to be. She noted Eiji’s fashion, one of the two main characters in the story, was a little off on purpose since it added to the charm.

Ayumi Yamada, a supervising animation director, talked about what it was animating those said designs for Banana Fish. When she does faces, she tries to eliminate as much movement in the bridge of someone’s nose as possible because it can look awkward. She also stressed the importance of animating small details; for instance, Eiji is a Japanese person so he can hold and use his chopsticks perfect. Ash, the other protagonist of the series, has never lived in Japan and so he struggles. Later in the talk, she admitted that the hot-headed purple mohawk clad Shorter was the easiest for her to animate while Ash was the most difficult. 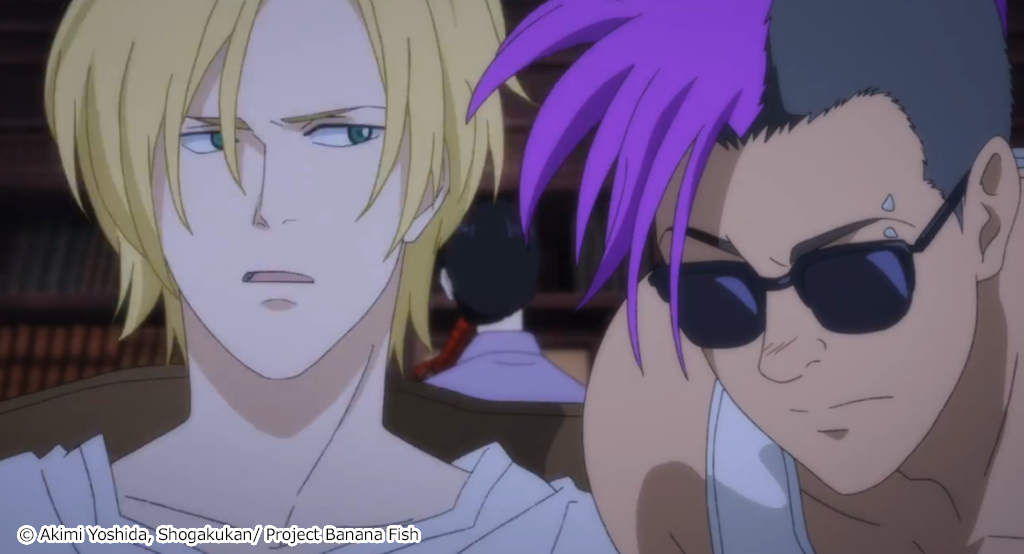 The staff talked about some of their favorite scenes in Banana Fish. Again, extreme spoiler territory from here on. One that they all cited was Shorter’s death. It wasn’t fun for any of them to draw because they were all so attached to their unique version of the character. However, they knew they had to give this one their all because it was pivotal to the plot and the show’s emotional punch. Another favorite they all agreed on was the first time Ash meets Papadino in the series. Hayashi noted there weren’t many opportunities in anime to draw a good looking boy and an old man.

Of course, the director had a lot of unique picks for her favorite scene. The first one that came to Hiroko Utsumi’s mind was a scene of Ash and Eiji eating dinner together. She delighted the audience with the comment ‘I wanted to really draw the avocado. I put a lot of effort into animating this scene’.  Utsumi then cited a scene of Ash and Eiji having a nighttime real talk in episode 18 that she said makes her cry more than the ending. A poignant observation, ‘We know Ash will never go to Japan so him asking Eiji about (Japan) makes (the scene) sadder. Another left-field pick from the director was one where Eiji, typically meek, pole vaults over a fence. ‘This was the first that Eiji looked cool to Ash. This is where their relationship becomes special’. 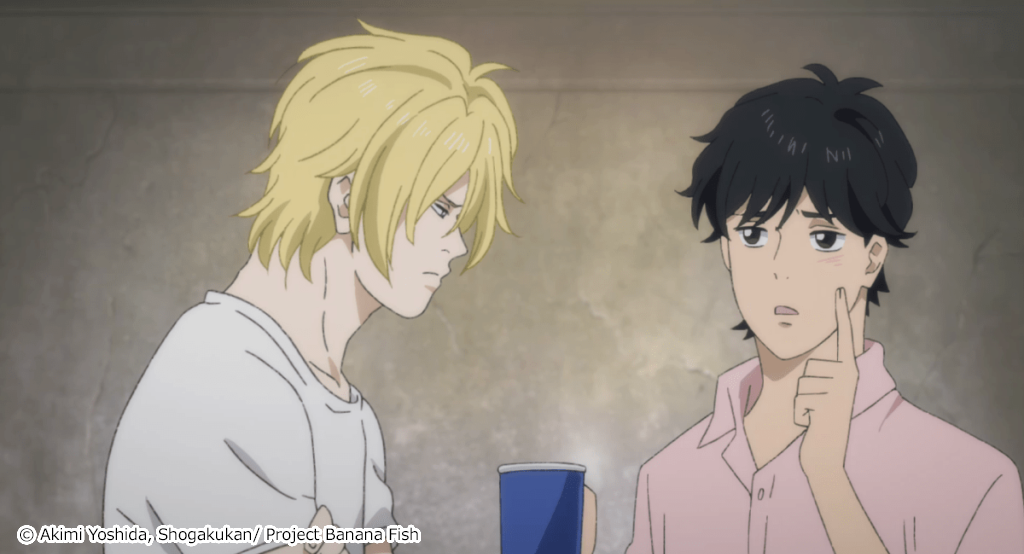 From here we were treated to a pre-screened Q&A session where we got to hear more interesting insights about Banana Fish. It started off with a fan asking how did the team place scenes original to the anime in with what was adapted from the manga so well. Utsumi mused saying she didn’t think the author had planned out the ending when first starting the manga. However, since the anime was made almost 30 years after it finished, they knew which scenes were the most important and could focus on them. They also knew what to cut out. That left room for the entire staff to voice their ideas and interpretations and collectively decide what would go into the final anime.

Finally, Andrew Upton, originally from America, was asked how foreigners could make it at MAPPA or other animation studios and whether MAPPA had specific criteria for animators. He said his story wasn’t exciting, ‘I applied. I searched and sent in applications. I wanted to work at MAPPA because I saw Kids On The Slop and Terror In Resonance.’ He got his interview but he also stressed you need to speak Japanese. He spoke on MAPPA’s criteria, specifically saying they didn’t have any. You need to be able to speak Japanese and you need to be able to draw. Other than that, they’re open. Upton noted the studio was very open to working with foreigners as long as they have a needed level of fluency.

Those were the biggest nuggets of Banana Fish insider baseball from the panel at AnimeNEXT. A few other choice bits included Hayashi saying ‘If I was to marry a character, it would be Shorter. I think he’d be a good Dad.’ and Utsumi’s admission ‘Ash could wear anything and still make it look good.’ Ash was the least popular character for the animators to animate because making him look good was difficult and the staff wished they had another 12 or so episodes. Still, they were satisfied with the final product. No regrets.

Banana Fish by Studio MAPPA is available for streaming exclusively on Amazon Prime.