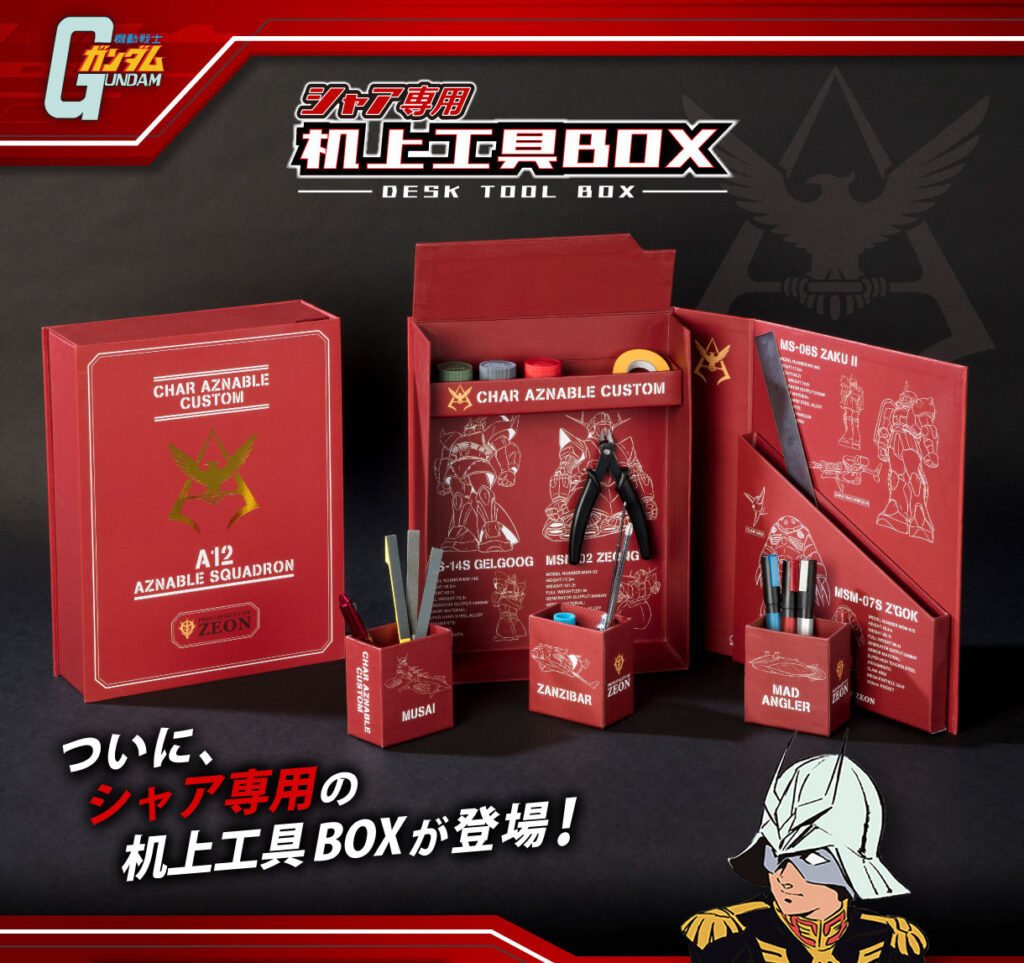 Premium Bandai will soon release a red desk toolbox themed after Char Aznable from Mobile Suit Gundam. They are now accepting pre-orders for the box, which will come out in May.

As the photos on Bandai’s website suggest, this desk tool box pretty much shouts Gunpla.

First of all, the box is crammed with Zeon logos and artwork from the Gundam franchise. This includes the ‘A12 Aznable Squadron’ and ‘Char Aznable Custom’ labels and gold foil logo on the front cover, and illustrations of various Zeon mecha on the inside.

There are also a couple of storage pockets, and removable storage boxes inside the toolbox. The website says that the box can store ‘tools used in plastic model production, such as markers and masking tape.’ The right pocket is the correct size for A4-sized objects (such as cutting mats, see below). And the box is also equipped with neodymium magnets (the strongest kind), which can be used to attach magnetic tools.

We should note that the toolbox does not come with any actual Gundam model-making tools. You have to buy those separately. For example, the Char Aznable box web page includes a link to Bandai’s Mobile Suit Gundam cutter mats.

Of course, this Gundam-themed box could probably be used for other hobbies, projects, or any other sort of small item storage. But there’s no doubt that this is primarily meant to be a Gunpla model-making box.

As we noted in an earlier story, more than 500 million Gundam model kits exist out there worldwide, so there’s undoubtedly a large market for this box.

If you’re not a fan of Char Aznable, they also have the ‘good guy’ version, which is designed to look like a Gundam Operation V Manual on the outside. On the inside, the basic design is very similar to the Char Aznable version, except it’s blue. Of course, it also features the Earth Federation Space Force instead of Zeon.