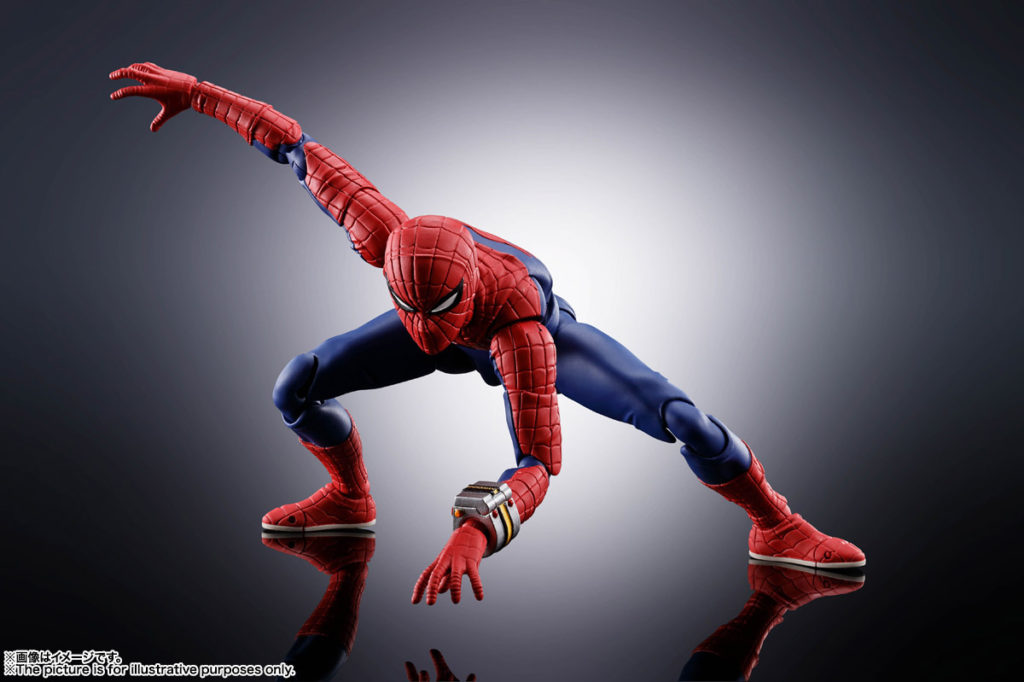 Easily the most unique entry in the “Spider-Verse”, Toei’s 1978 Spider-Man TV series (often referred to as Supaidaman by English speaking fans) has earned a rather legendary reputation amongst comic book readers worldwide. A very loose adaptation of the hit Marvel Comics Spider-Man comic book, the Japanese Spider-Man TV show created its own cast of characters and superpowers. The story of the show follows motorcycle racer Takuya Yamashiro who after a series of wild events result in him taking on the mantle of “Hell’s Emissary”, Spider-Man, to prevent the evil Professor Monster and his Iron Cross Army from taking over the Earth. Takuya uses a special communicator to transform into Spider-Man and employs the help of the space battleship Marveler, which transforms into the giant robot Leopardon, when the situation gets too big for him to handle alone. Even though the show was rather short-lived (running for less than a year), it influenced the creation of Super Sentai and as recently as 2014 was introduced to the Marvel Comics canon in the Spider-Verse event that inspired the hit animated Enter The Spider-Verse movie. In fact, it’s already been confirmed that Leopardon at the very least will appear in the follow-up!

Given the series’ legacy, the lack of merchandising is rather surprising. Even during the original television run, there were very few toys released for the series. That’s about to change though with 3 upcoming releases from Bandai set to drop in early fall.
Kicking things off is a highly articulated and accessory filled Spider-Man figure from S.H. Figuarts. The sculpt and poseability on this figure look amazing from the promotional photos released, but I think my favorite element is that the included “webbing” looks like rope, which was something that stood out amongst the limited special effects featured in the TV series. This attention to detail makes the figure an absolute must-buy for any fans of the property and isn’t surprising considering S.H. Figuart’s track record. This figure will set you back 6,500¥ and is scheduled for an August 2020 release.

Next up is the Leopardon & Marveller summoning set from Soul of Chogokin. This super high-end set includes a plastic & die-cast Leopardon figure which can transform into the Marveler spaceship, alongside minifigures of Spider-Man and his hot-rod, and Takuya’s summoning bracelet. This marks the first time ever that the summoning bracelet has been available for purchase in any format, and it features basic electronic effects when 3 AAA batteries are inserted. The set also comes a display stand for all of the included parts. This set drops in September 2020 for 20,000¥.

The final product in the Toei Spider-Man line is a Leopardon figure from Bandai’s Super Mini-Pla line of plastic figures. This is the most affordable & bare-bones of the figures, but it still looks super nice. It comes with a handful of extra accessories for use with posing, and a display stand. This figure is also scheduled to release in September 2020 and will cost 4,950¥.

As a huge comic book & Spider-Man fan myself, all 3 of these sets are right up my alley. I’m definitely going to go after the S.H. Figuarts figure, and that Soul of Chogokin set is super tempting. No official U.S. release has been announced as of yet, but Bandai has done an amazing job of making their S.H. Figuarts series available in the U.S. via Bluefin Distribution so I wouldn’t be surprised if some kind of release was announced for fans in the states to take advantage of. In the meantime, if you absolutely can’t wait you can pre-order now from Hobby Link Japan.