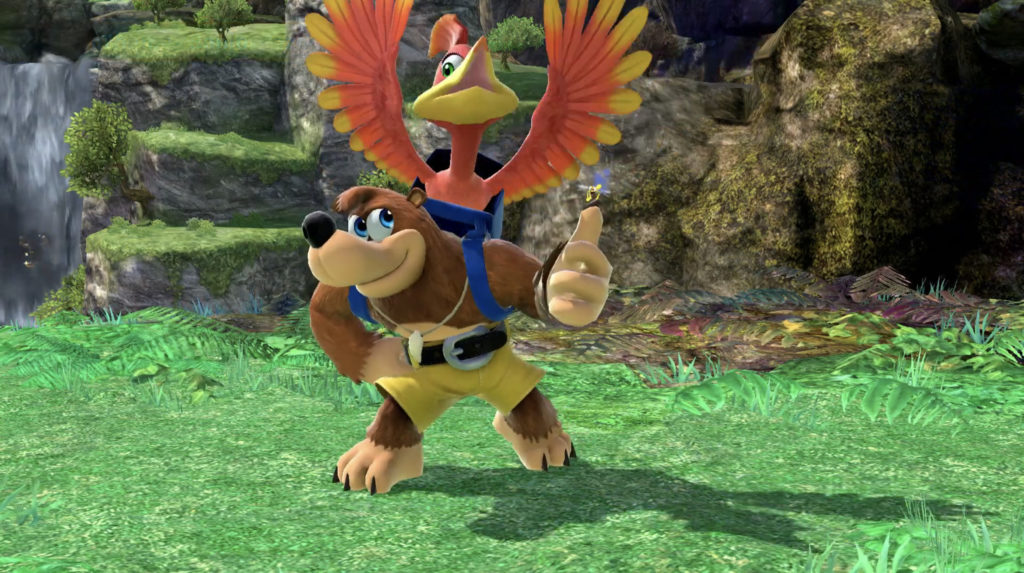 There wasn’t just a lot of new games announced for Nintendo Switch today with the arrival of a brand new Nintendo Direct, as new information on DLC for Super Smash Bros Ultimate was also revealed. With a short trailer during the Nintendo Direct announcing Fatal Fury character Terry would be coming to Nintendo Switch, it was also revealed that the previously announced fighter for Super Smash Bros Ultimate, Banjo Kazooie, would be released today. A special 25-minute showcase of the character followed the event today, giving fans a detailed look into how the character works (as well as creator Masahiro Sakurai’s incredible talent for playing games with 2 controllers at the exact same time!).

After plugging the game’s release on Xbox One, Banjo Kazooie was showcased in battle for the first time, with many of the moves the character originally used in the games have been adapted to fit within Super Smash Bros Ultimate. For example, the character’s dash move is now the Talon Trot, while the character jumps using the Flap Flip and Feathery Flap moves, just like they did in the original game on Nintendo 64. That’s not to say everything is completely identical, however. The Claw Swipe is Banjo’s neutral attack, and though it is based on moves from the original game, it is also rather different, with the move being adapted to better suit the faster play style and 2D plain within which Smash is played. The flurry attack is the Rat-a-tat Rap, and the character’s forward roll, similar to Donkey Kong’s move, is the character’s forward roll. The ways in which many of the character’s iconic moveset from the original game has been adapted while retaining the spirit of the moves within both a switch in genre and dimensions are impressive.

That being said, this, plus the rest of their moves in the basic moveset, are cool, but nothing special or particularly noteworthy. What is interesting is the special moves that Banjo has at his disposal. First, there is the egg firing move, which is a bouncing projectile that can be held to become the Breegull Blaster, which fires eggs like a gun and can be used while moving, but the power of which will decrease over time. My favorite is the powerful risk-reward side-special Wonderwing, which could easily turn the tide of battle if used correctly but has to be conserved and used at the right time. This move has only 5 uses per stock but is a powerful side-smash, during which the character is invincible and can’t take any damage from opponent moves. Not only that, the move has priority over almost every attack in the game, making it very difficult to stop. It does have some weaknesses, the biggest of which being that it will leave you wide open to an attack if shielded, while it can also be interrupted by a grab. Used correctly, there’s little an opponent can do to stop you inflicting massive amounts of damage, but any mistake will cost you.

The Final Smash for Banjo & Kazooie in Super Smash Bros Ultimate is called the Mighty Jinjonator, a powerful Final Smash based on the final blow of the Gruntilda boss fight from the original Nintendo 64 game, with the player being sent flying as a result of the attack. A new stage based on the opening area of the game named Spiral Mountain will also come with the DLC fighter. This is a unique stage as, although the central platform will remain static, at certain times, indicated by a rotating arrow icon that appears on the screen, the entire stage will rotate, changing its shape as it goes. This is quite a cool way to implement the opening area into the game, as the shape and iconic landmarks are all featured within the stage, including the giant Gruntilda head marking the entrance to her lair.

I’ve always found the music of Super Smash Bros Ultimate one of its most appealing attributes, and the range of Banjo Kazooie music, both original and remixed, included here is a very welcome addition to the game. The remixes for this new addition have been handled by the game’s original composer, the legendary Grant Kirkhope, remixing the tunes to make them more fitting for a battle environment. This actually marks the first time Masahiro Sakurai has collaborated with a musician outside of Japan, but he noted he was happy with the results, with 7 remixes being among the 10 included tracks, covering all of the games’ most well-known tunes.

Although Banjo Kazooie was the most noteworthy news from this 25-minute bonus presentation, we did receive a few new announcements for Super Smash Bros Ultimate unrelated to the new character. Alongside the information about Terry from Fatal Fury’s announcement (which was very briefly teased in this Smash video broadcast), the news of Mii Fighter costumes including Sans from Undertale and the news that more DLC beyond the initial 5 is on the way was mentioned in the article covering the Direct as a whole, we also learned that Home Run Mode will finally be making a comeback in version 5.0 of the game in this special additional broadcast. We also got a look at the final designs for the next Super Smash Bros. Ultimate amiibo set for release on September 20, these being Squirtle, Bulbasaur, and Snake (fittingly hidden underneath Sakurai’s desk).

That was everything the special broadcast for Super Smash Bros Ultimate had to offer, but with a huge amount of information on Banjo Kazooie and more included, it’s hard not to be impressed. The game continues to grow despite already housing what is easily the most impressive collaboration of fighters in a single game ever, and I personally can’t wait to learn about who is coming next.