‘Beast Children’ Review: A Self-Proclaimed ‘Beast With No Fangs’

10 years ago, the average Japanese person probably wouldn’t have been able to tell you a thing about the sport of rugby. But a surprise victory against the South African national team during the 2015 Rugby World Cup that some have called the ‘greatest shock in Rugby World Cup history’ put the hitherto unknown strength of the Japanese national team on the map, which no doubt also played a part in Japan winning the bid to host the 2019 Rugby World Cup. Terasaka Kento’s Beast Children pays homage to this fact in its opening pages, setting itself up as the manga worthy of representing the spirit of Japanese rugby as it continues to grow in the coming months and years.

But if this is the best that Japanese rugby can muster, then I’m not entirely sure about its future.

A Muddle of Cliché and Formula

There’s almost no point in me doing a review of Beast Children, or trying to explain the many ways in which it fails as an endorsement for the spirit of Japanese rugby, because the series has already come up with the best way to describe itself: a ‘beast who lacks fangs.’

While this is used in the story to describe the potential of Hyakkengawa Rugby Football Club, which the series follows, there’s really no better way to describe how Beast Children takes the very potent, real-world potential for a compelling rugby manga and squanders it, devolving instead into a mess of cliché and formula. 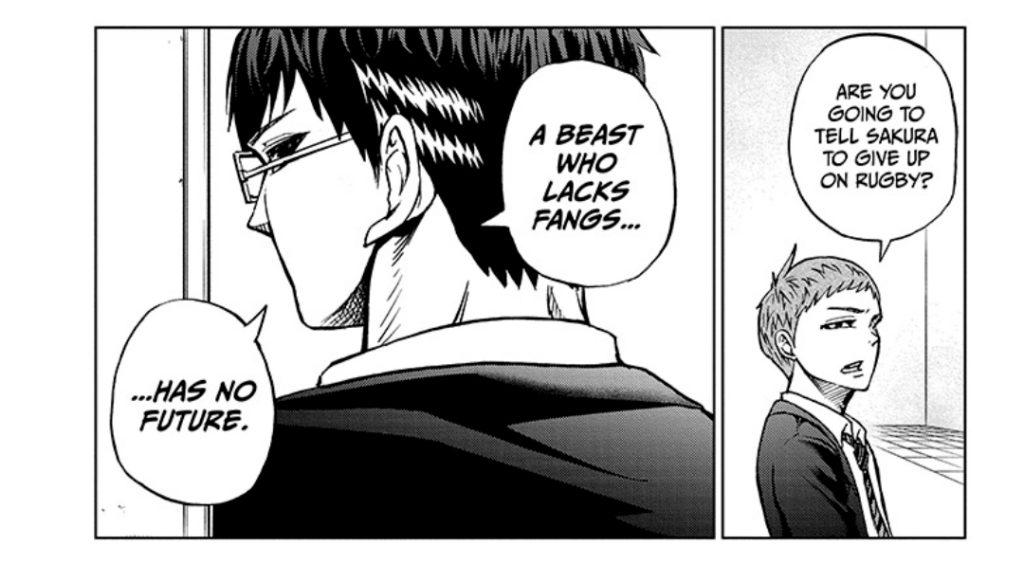 No story can ever be entirely original. Using elements from other stories is, therefore, to be expected.

Furthermore, the harsh circumstances of weekly serialization, as seen in Weekly Shonen Jump, often necessitate that creators rely on cliché and formula even more than monthly, or even biweekly published series.

Plus, we all love clichés and formulas. There is a reason why certain elements enter the creative hive mind in the first place, after all: they’re compelling in a way that transcends age, language, or era. Hence why some may read Beast Children and find it entertaining, at least on a base level.

But if you’ve read any other series in Weekly Shonen Jump, especially any sports series that are currently ongoing, then you’ll quickly start to catch on to how many elements author Terasaka Kento has blatantly stolen from his peers in the magazine, and how unappealing his more original creations prove to be.

First, let’s talk about the story. Beast Children starts out with our main protagonist, Shishigaya Sakura, getting into the sport of rugby by chance (having received tickets from a family member who couldn’t go) and, more concretely, taking up the player of Otonara Ikki as his idol and ‘master.’ 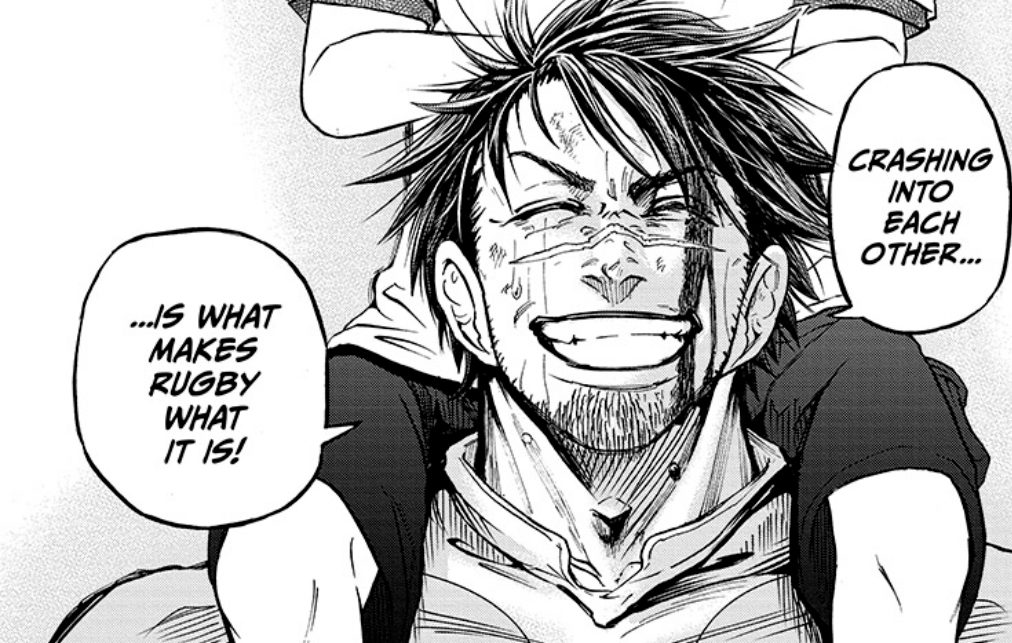 It’s unfortunate that, during this scene, the Sakura as a child mentions that he’ll ‘miss My Hero Academia,’ as it does make the reader more aware of how much this chance encounter takes after the chance encounter between All Might and Deku, especially as Ikki’s huge frame makes him an easy stand-in for the Symbol of Peace.

Even without that direct comparison, however, Beast Children simply joins the hundreds, if not thousands of other sports manga who have used this ‘chance encounter’ framework to create a relatable main character for the audience, as he will know next to nothing about the sport at the start. So far, so yawn.

Moving on, the main meat of the story stems from the relationship between Sakura and Ikki’s son, Yukito, who just happens to be attending the same school of Sakura.

Inspired by Yukito’s father Ikki, Sakura practices rugby by himself, as his middle school doesn’t have a proper rugby club, but what he really wants to do is tackle someone for real.

Learning that Yukito is Ikki’s son sets Sakura on a quest to try to convince Yukito to play rugby with him, so that he can finally fulfill his dream of tackling someone for real.

Unfortunately for Sakura, Yukito is having none of it. As it turns out, Ikki died not too long before his meeting with Sakura, and there’s clearly some unresolved trauma there, especially as Sakura so desperately idolizes Ikki’s violent, bloody form of rugby that ultimately got him killed. 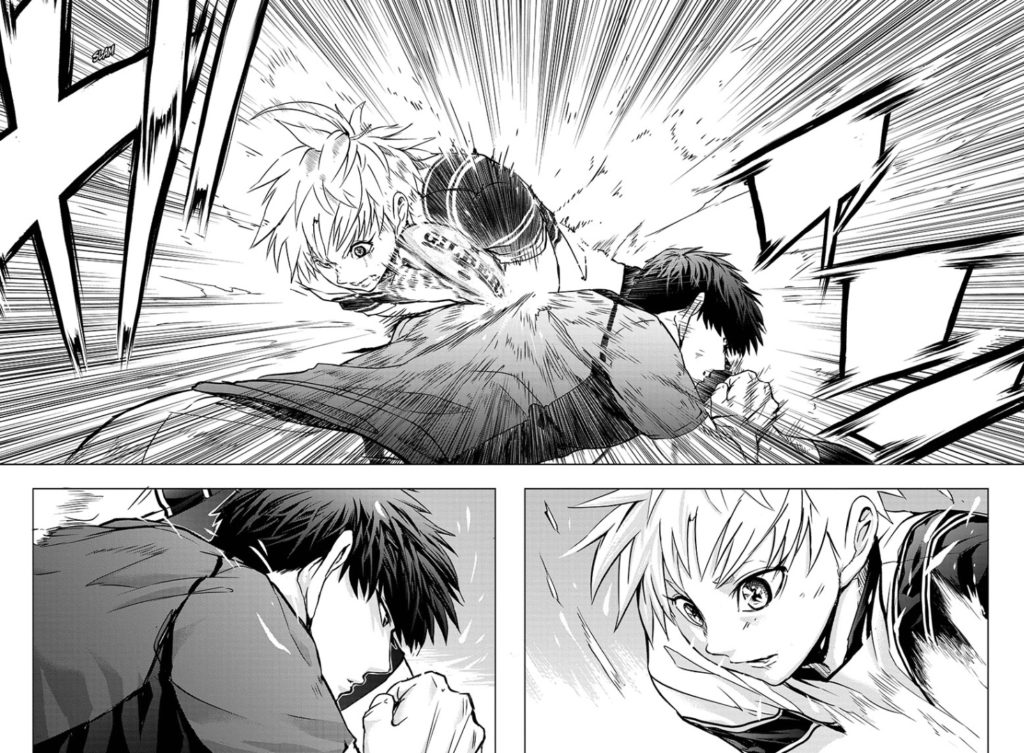 Credit should be given to author Terasawa Kento for tying the narrative into a character relationship, as this gives the audience a more human entry-point into the story. So far, so good.

But what I won’t give him credit for is how basic these characters and their motivations are. It seems like Terasawa has taken the most basic of character archetypes and somehow gotten them past the editors of Weekly Shonen Jump without alteration.

Perhaps both Terasawa and the Weekly Shonen Jump editorial team had the very similar relationship of Hinata and Kageyama (at least, in concept) from Haikyu!! in mind when they crafted this dynamic. But one thing sets Beast Children and Haikyu!! apart: good, nuanced character writing, and quite a lot of it. 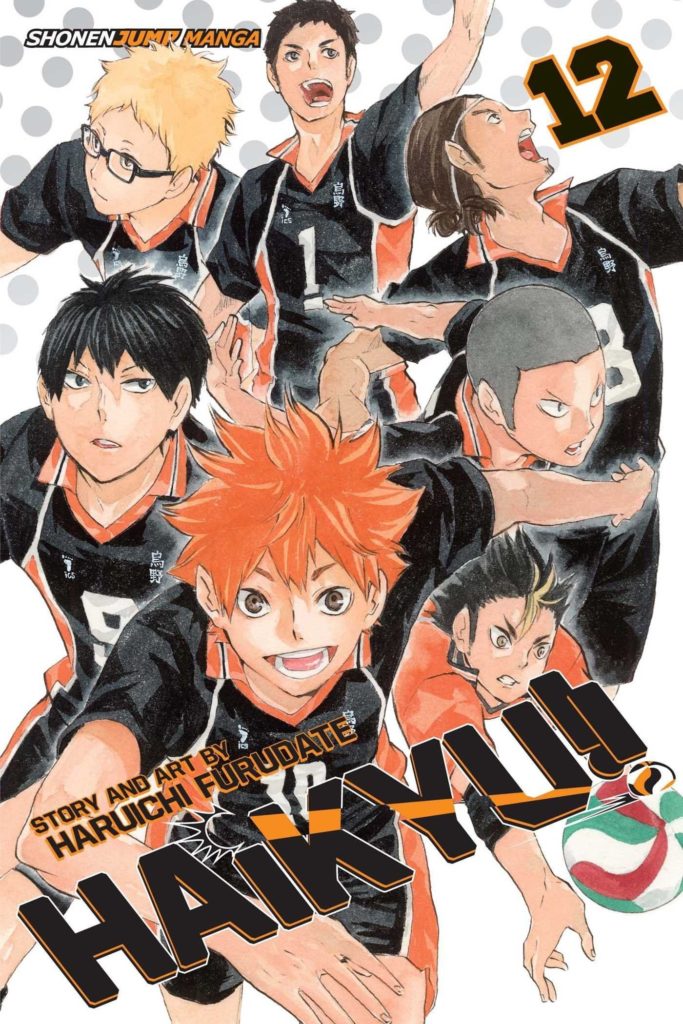 As I’ve said before, an interesting cast of characters is probably one of the most important things for a shonen manga to nail. You can only do this, however, by taking the time to develop your characters and show them off through good character writing, something which Beast Children shows a severe lack of.

In many ways, Terasaka seems to have simply taken the most basic, cookie-cutter ideas for characters and simply placed them into his story without much thought.

Take our protagonist Sakura, for example. He’s the same type of a willful idiot that we’ve seen so many times before, displaying an endless amount of energy and willpower despite his bland personality, which hardly makes him exciting. Think Tsukamoto from DAYS, or even Gon from Hunter x Hunter, and you’ve got him down pat.

But if the story needed a point-of-view protagonist for the audience, given the relatively low profile of rugby as a sport in Japan, then fair enough. How about the side characters, then?

No dice there, I’m afraid. Yukito basically boils down to a mysterious, somewhat edgy rival; the head of Sakura’s high school rugby club Kujirai is nothing but an abrasive loudmouth; and Sakura’s best friend Sora is, well, the protagonist’s best friend. Oh, and there’s also a guy who just really loves kicking balls. 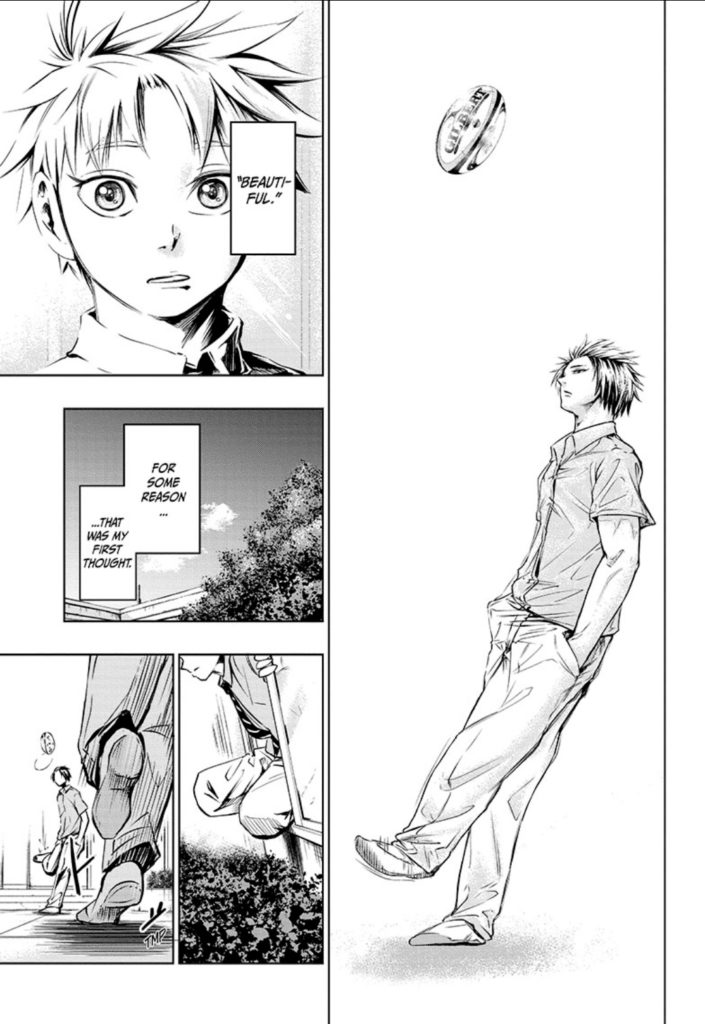 It’s a shame to think that the only character that interested me while reading Beast Children was Otonara Ikki, because of the mysterious circumstances of his death, who is, well, dead at the start of the series.

A Success All the Same?

Beast Children’s severe lack of interesting characters is unfortunate, as the series has set itself up as a character drama with a big ensemble cast of characters who make up a team that needs to be whipped into shape, the so-called ‘beast with no fangs.’ It’s unlikely, at this point in time, that the series will succeed in doing so.

But could it succeed as just a straight-up rugby manga, then?

In a certain sense, yes. Terasaka Kento’s art is rough in places, particularly when it comes to the cartoonishly out of proportion character designs, but his use of action lines and double-page spreads do effectively communicate the intense, brutal nature of rugby as a sport. 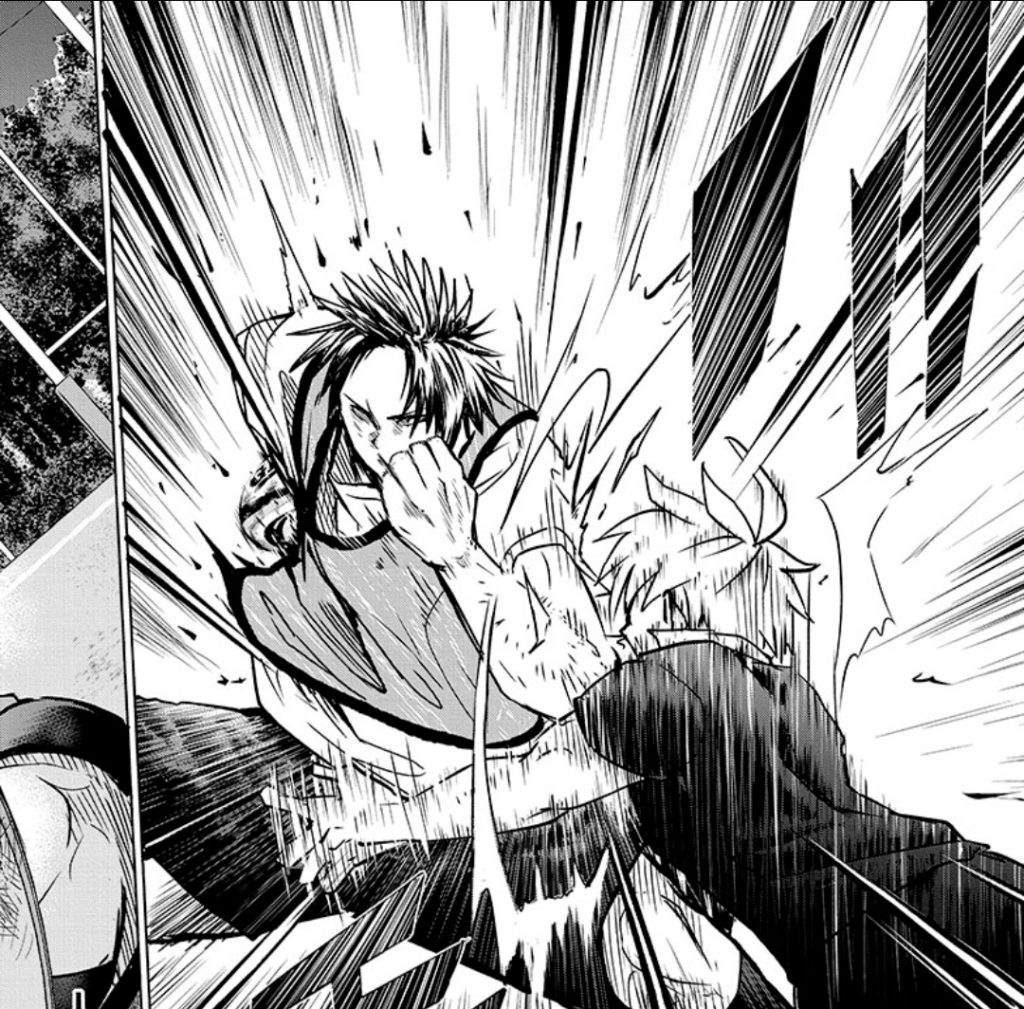 But the devil is in the details, and Terasaka’s art often trips up when it comes to effective paneling and panel composition, which often fail to convey the flow of an action scene and often lead the reader wondering what they should be focusing on in a single panel. Perhaps Saito Yuu can give you some pointers on that one, Terasaka.

Even so, the fact that the series is currently serialized in Weekly Shonen Jump (the biggest manga magazine in Japan and, indeed, the world) which will no doubt push it to the forefront of rugby-related manga and raise its profile as the rugby manga for Japan’s newfound confidence in the sport.

Beast Children is far from the first rugby manga (All Out! is a similar manga that has been serialized in Kodansha’s Monthly Morning Two since 2013) but it is the one manga that most people are likely to stumble upon in the bookstore or online, either by chance or in a conscious search for rugby manga, especially now that the series’ first collected volume has now been released.

Your average consumer may even find some entertainment in the series’ good points, such as the aforementioned double-page spreads and panel artwork, and the early twist that the two main characters won’t be going to the same school, after all (a twist that actually seems to have been pulled with Haikyu!! and others in mind).

But even the most undemanding of consumers will surely be let down as they read more into the series and see it settle into a formulaic match-based arc structure featuring uninspired characters and muddled composition.

So forgettable are these later chapters that I actually read ahead at one point on VIZ’s Shonen Jump app and didn’t even notice. Each chapter is so mind-numbingly dull and utterly void of discerning elements that jumping ahead in the story didn’t even register in my brain. 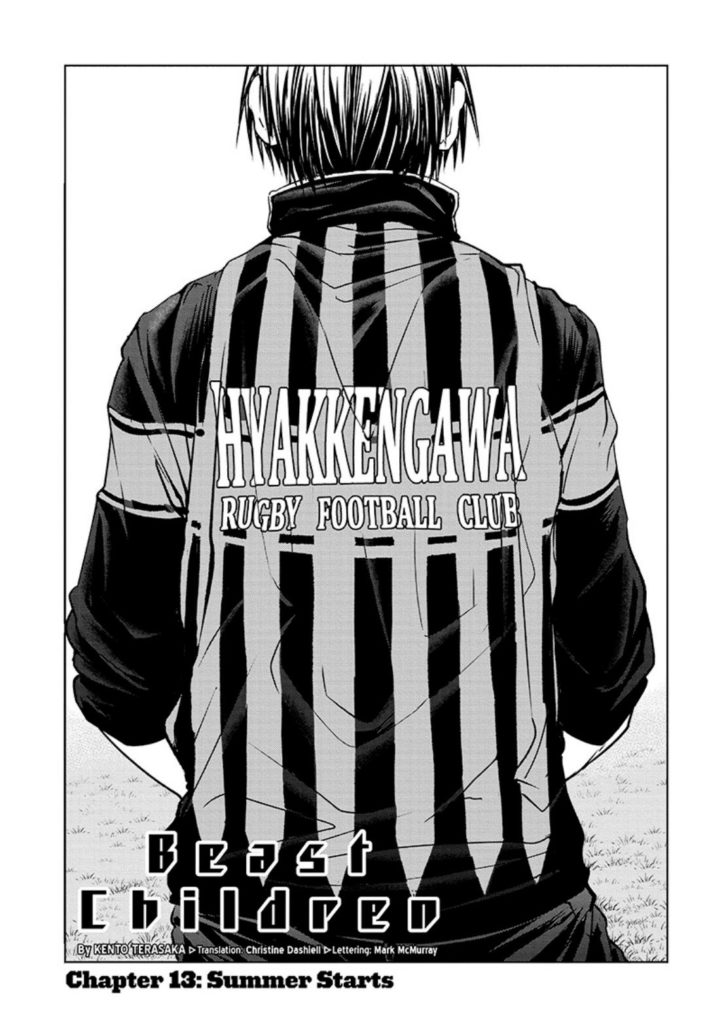 In this sense, the incredible potential for a successful rugby manga in the current Japanese sporting climate has been thoroughly wasted. Beast Children refer to its own Hyakkengawa Rugby Football Club as the ‘beast with no fangs’ in-universe, but you could easily apply that to the series as a whole.

Not only is Beast Children a complete waste of potential and an utter waste of time, it’s also bound to annoy any avid fan of Weekly Shonen Jump manga (such as myself) due to how many of its story and character elements are blatantly copied from other series in the same magazine with almost no understanding of what makes them successful or compelling. I, for one, will be glad when this one is inevitably canceled.

You can read Beast Children as it releases in Japan via VIZ Media’s free Shonen Jump service.