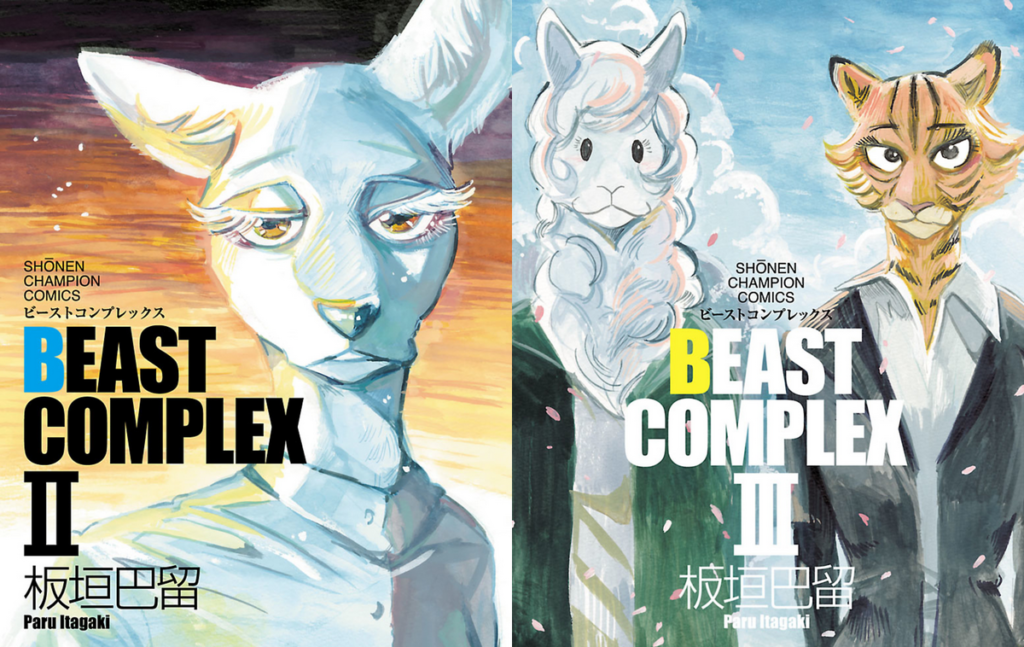 ‘The world of BEASTARS isn’t over.’ So says the wraparound obi for BEAST COMPLEX volume 3, which is good news for anyone who was let down by the series’ slightly underwhelming ending. Moreover, both BEAST COMPLEX volume 2 and 3 offer an excellent opportunity to investigate how Paru Itagaki’s style has changed since her debut.

Back when Itagaki first put pen to paper and created the seven stories that went on to become BEAST COMPLEX volume 1, she was a complete newcomer to the manga industry. True, her father exerted some influence, but she didn’t start thinking seriously about becoming a professional mangaka until the end of university. As a result, volume 1 of BEAST COMPLEX is marked by a certain sense of scrappiness.

To be absolutely clear, that doesn’t mean that the seven stories are bad. Far from it: there is a reason why they would go on to be the ‘prototype’ for BEASTARS. Nevertheless, they are a little rough around the edges: the character designs, in particular, are a little too complicated for the medium of manga and often sacrifice anatomic accuracy for readability. Volume 2 and 3 of BEAST COMPLEX do improve on this, albeit not by diverting from or changing the series’ core ideas. 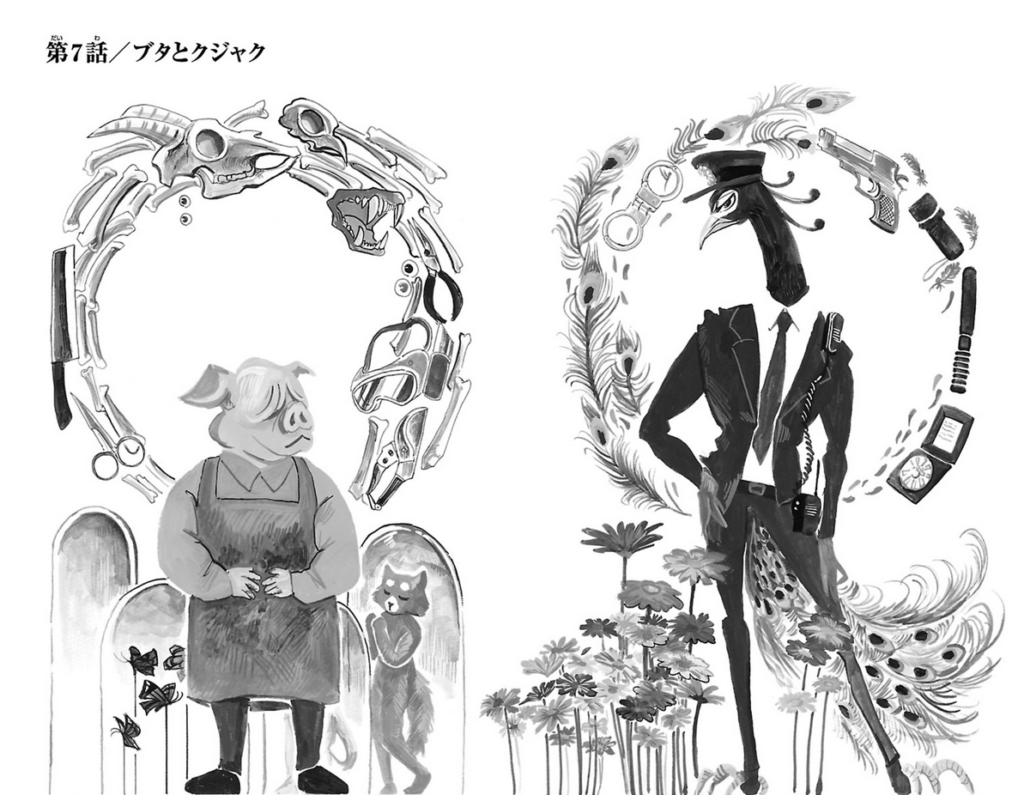 Part of the reason why BEAST COMPLEX ended up becoming the ‘prototype’ for BEASTARS was not simply because it came first, but because it pioneered the concept of exploring the relationship between carnivores and herbivores in a world of anthropomorphic animals. This wasn’t something that had been done before, and it even has certain real-life connotations, making it extremely compelling.

This focus on carnivore-herbivore relations is one that doesn’t change in neither volume 2 nor volume 3 of BEAST COMPLEX. Much like volume 1, each one of these follow-up books is comprised of episodic stories about a pair of different animals, except for one crucial difference: some of them revolve around characters who appeared first in BEASTARS.

Volume 2, for example, tells the back stories of many of those who reside in the Hidden Condo. You don’t need to know this in order to enjoy the stories, but it does provide an extra layer of detail and serves to further flesh out the world that Legoshi and co. inhabit. Speaking of Legoshi, there are actually two stories in volume 2 and 3 of BEAST COMPLEX that feature him after the end of BEASTARS: one about him and Haru, while another is about him and Sagwan.

This arguably pushes volume 2 and 3 of BEAST COMPLEX further towards being a ‘sequel’ to BEASTARS and not just another collection of short stories, but the function of BEAST COMPLEX was always to establish the world that Legoshi and co. would go on to inhabit by exploring the concept of herbivore-carnivore relations.

Consequently, it feels almost natural that characters from BEASTARS would appear in volume 2 and 3 of BEAST COMPLEX. It is BEAST COMPLEX’s world, after all. BEASTARS was just set in it.

In any case, one of the main things that makes volume 2 and 3 of BEAST COMPLEX distinct from volume 1 is its visual style. As mentioned, Itagaki’s art style was arguably overly complex in BEAST COMPLEX volume 1, which is something that also carried over into early BEASTARS. Even so, Itagaki’s art style has changed greatly since that series began in 2016, mainly in the sense that the lines have simplified and become more ‘manga-like.’

The net result is that volume 2 and 3 of BEAST COMPLEX, as well as later BEASTARS, are much easier to parse. You also get the sense that Itagaki has a much more confident command of the page nowadays: there are only a handful of double-page spreads in BEAST COMPLEX volume 1, but almost every chapter in volume 2 and 3 has one. Again, the net result is that the most dramatic moments of the story are more easily grasped by the reader.

Could the improvements in Itagaki’s artistic expression be the reason why I enjoyed the episodic stories in volume 2 and 3 of BEAST COMPLEX much more than volume 1? Perhaps, but they’re not all perfect: the premise for chapter 10 ‘Steller’s Sea Eagle and Mongolian Gerbil’ seems a little contrived, for example. On the whole, though, the good far outweighs the bad.

Probably one of the most compelling things that BEAST COMPLEX offers as opposed to BEASTARS is a variety of romantic relationships. In the latter series, all of the core love stories are entirely heterosexual: Legoshi and Haru, Louis and Juno, with only Pina occasionally arriving to jumble up the whole equilibrium.

That being said, the stories in BEAST COMPLEX volume 2 and 3 seem to suggest that Itagaki has less of an interest in depicting heterosexual relationships than might initially appear. Many of the stories are about two animals of the same sex drawing close to each other, with plenty of obvious homoerotic undertones. The same was true of volume 1, by the way.

Taken alongside Itagaki’s latest, more mature and sexually charged work Botabota, this seems to suggest that there is more to the author’s artistic expression than meets the eye. With any luck, she can continue to explore what makes her particular brand of manga different from others for years to come, far beyond her initial debut.

She can rest assured that there will be an audience there to read it.

BEAST COMPLEX volume 2 and 3 are available now in Japanese via Akita Shoten.