Although it was fairly popular before, BEASTARS has been the talk of the town ever since it was announced that it would be receiving an anime adaptation by Studio Orange. And while there’s still no confirmation on when that will be coming out, the series has recently confirmed a very exciting collaboration with the renowned Tobu Zoo in Saitama.

You may recognize that zoo’s name because of its collaboration with Kemono Friends all the way back in 2017. This resulted in the saga of Grape-kun, the first animal (that we know of) to find his waifu in Hululu, a 2D anthropomorphized penguin from the fictional land of Japari Park.

Perhaps it’s because of the attention that this collaboration brought the park that it has continued to do collaborations with anime and manga series ever since. That being said, this latest collaboration with BEASTARS is perhaps the most fitting one since Kemono Friends, as the series does actually feature animals, albeit anthropomorphized.

Heading up the collaboration will be the series’ protagonist Legosi alongside an anthropomorphized version of one of the park’s most popular animals, the white tiger, in Itagaki’s iconic style. You can see them in action in the key visual below: 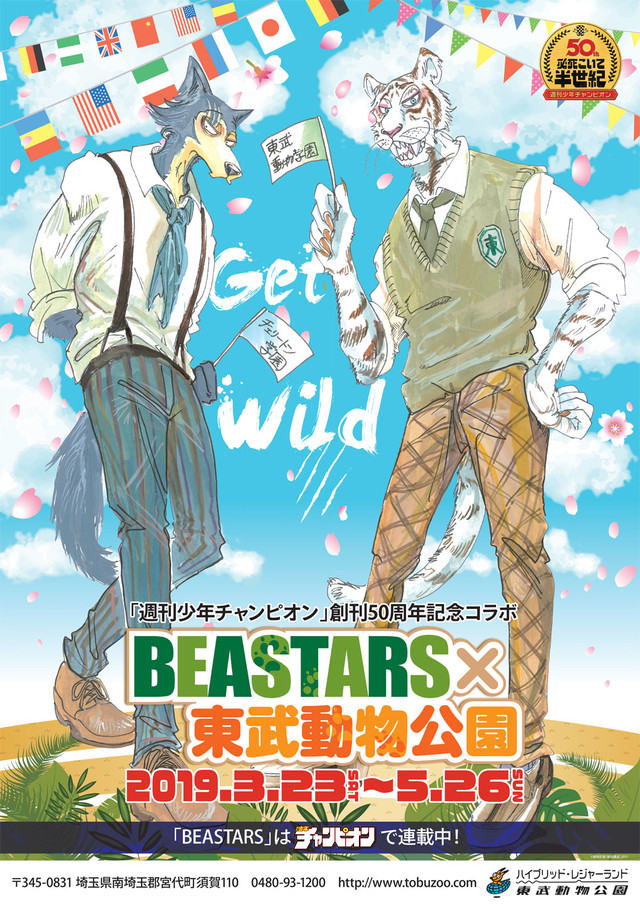 This visual will be used in a series of new information boards for a variety of the zoo’s animal inhabitant, where Legosi and the white tiger give basic information about the animals. They’ll also be appearing as giant cardboard cutouts around the park, much like in the Kemono Friends event.

Aside from this, the collaboration will also see a whole new range of BEASTARS themed food added to the park’s menu, many of which will recreate the food that appears in the series itself. The characters Rouis and Legosi will also see special menus dedicated to them, as it will be their birthdays during the collaboration on March 29 and April 9 respectively.

Furthermore, an event featuring Itagaki in some form or another is set to take place, but we haven’t gotten more concrete information on that yet. I’m sure that Itagaki themselves will be happy that their series is getting a little bit more attention now, and especially in such a fitting place as a zoo. You can check out the official collaboration website for more details.