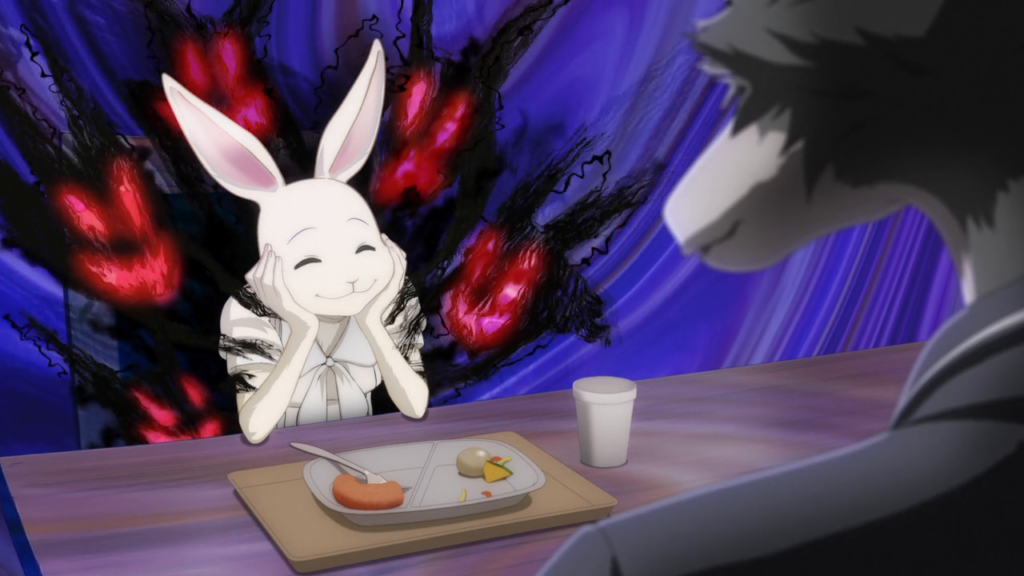 BEASTARS episode 5 sees in the beginning of a new arc as Legosi deals with his newfound notoriety after his clash with Bill in episode 4 that rounded out the end of the Drama Club arc. One month then passes and Legosi finds himself face to face with Haru, who he hasn’t been able to stop thinking about – could sparks fly?

A change in narrative arc always brings with it changes in production, but it is quite shocking to see in this episode how much Studio Orange has changed in their approach to adaptation. All that is to say that BEASTARS episode 5 is by far the most faithful to the original manga out of all of the episodes thus far – and for good reason.

It must be said that the series as a whole has been slowly shifting towards a one-to-one adaptation ever since its radically transformative opening episode. Even last week, the only major change was the insertion of a handful of very short anime-original scenes to better transition between the action.

In this sense, BEASTARS episode 5 represents the final stages of this adaptational shift. It’s pretty much a one-to-one adaptation, with the only change I was able to pick up on being that Legosi and Jack’s conversation about the play was moved from a flight of stairs to a drained swimming pool. Not sure why, but it’s hardly a big deal. 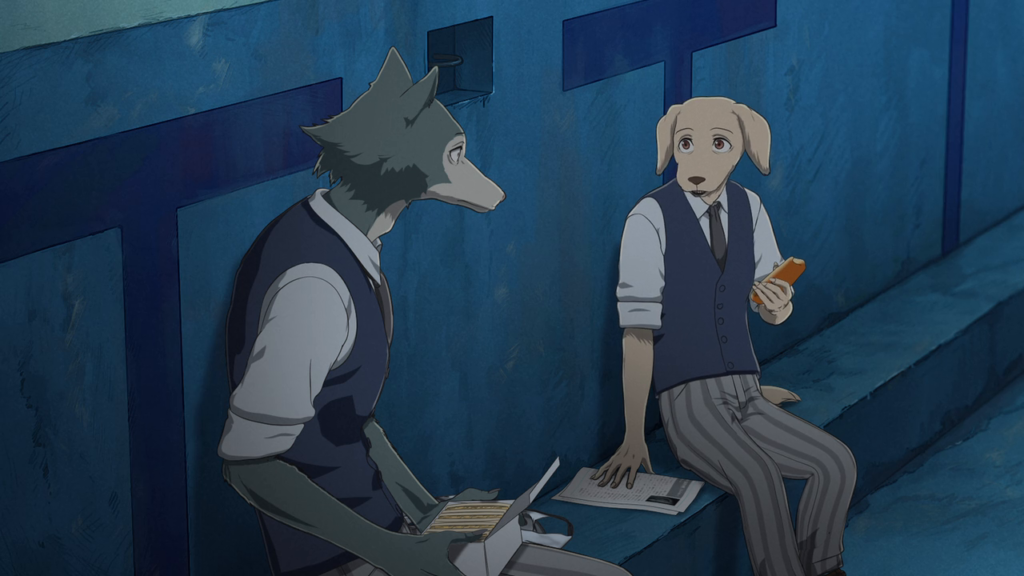 That doesn’t mean, however, that Studio Orange has stopped flexing their creative muscles. Rather, they seem to be diverting more resources to animation than ever before – creating some genuinely amazing moments of character acting throughout BEASTARS episode 5.

Our first taste of this comes in that opening scene where Jack chats with Legosi about his ‘performance’ in the swimming pool. Jack moves his head, body, and hands in such a way that matches his bubbly, friendly personality that in itself stems from his species as a dog – man’s best friend. 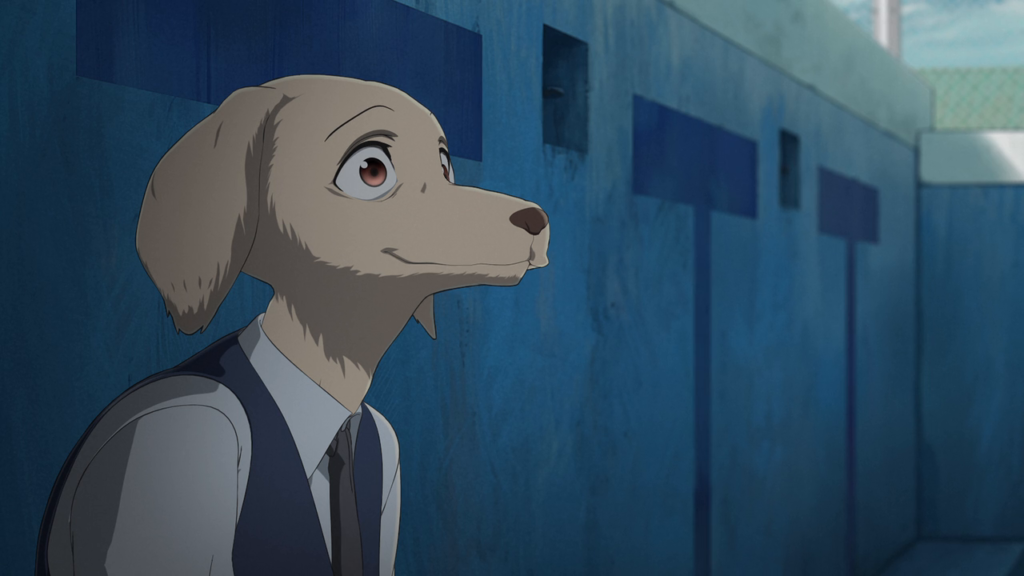 The second example of this comes in the scene where Louis lambasts Legosi and Bill for their clash atop the stage in episode 4. Both underclassmen react very naturally to the news that they’ll be suspended from the club as punishment, but there’s a beautiful bit of divergence as Legosi notices the crowd of press and fans behind Louis and nervously freezes, his eyes darting here and there.

When Louis turns to address the crowd, in turn, Orange do a great job in designing his body language so that we can see there’s a big difference between the ‘real’ Louis and the honor student image that he puts on for the public. 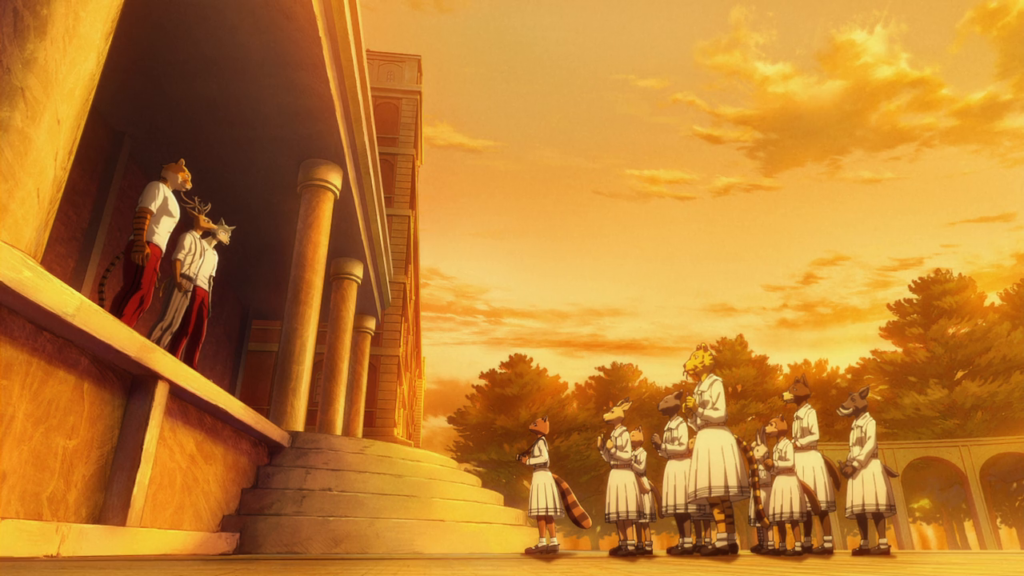 Finally, there’s that scene in the corridor where Legosi lets it slip to Jack that he might be in love with someone. The way that he happily skips through the corridor and excitedly holds his head in his hands, flings his arms about in the air, is – again – perfectly representative of his bubbly personality and really brings his character to life.

That being said, if we look at this character of Jack who is featured so much in BEASTARS episode 5, we can begin to see the repercussions of Orange’s adaptational choices coming back to haunt them.

Jack is supposed to be one of Legosi’s best friends, but his introduction scene was cut along with the rest of Legosi’s roommates back in episode 2. This means that while the anime-only viewer will most likely be able to grasp that the two are indeed friends, I’m unsure whether the level of their friendship is quite so obvious.

That’s quite a minor gripe that mainly stems from my own experience with the original manga, however. The anime-only viewer won’t notice this slight discrepancy, nor will they even care given how great BEASTARS episode 5 truly was.

While most of the first half of the episode is dedicated to rounding off the events of the Drama Club arc for good while also introducing the Meteor Festival, the latter half is an absolute joy as Legosi and Haru rekindle their fledgling romance in three excellent scenes that had me grinning from ear to ear.

Our first scene comes is that one where Haru is being bullied by the Harlequin rabbit that also appeared in episode 1, where she finally snaps and starts giving them a piece of her mind in a very satisfying piece of comeuppance.

It’s at this point that Legosi, unbeknownst to Haru, begins to approach from behind. The other rabbits see this now infamous wolf slowly advancing and are promptly scared stiff, their ears drooping down in fear and backing away slowly. 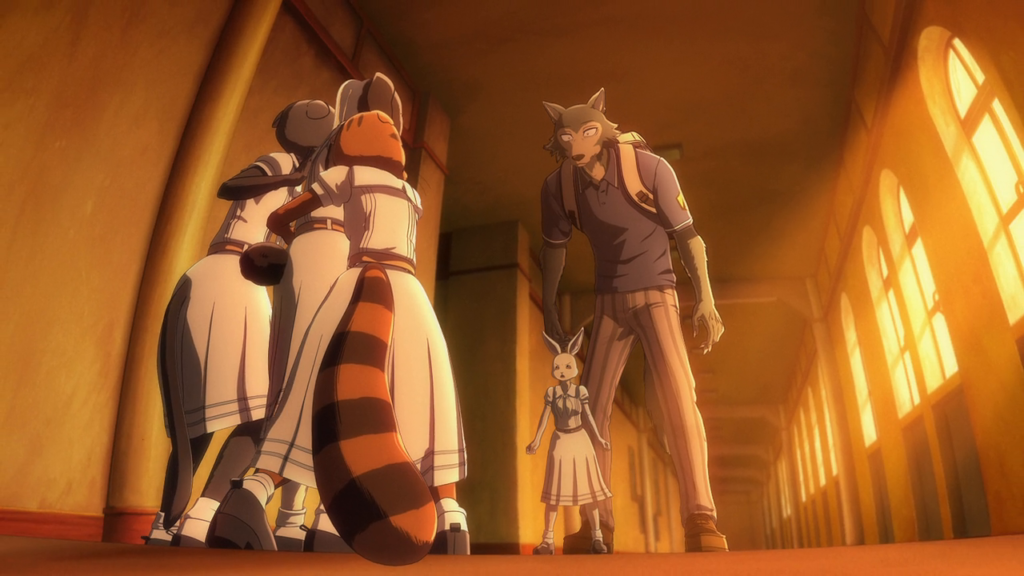 This scene is hilarious as Haru actually believes for a second that she’s managed to scare off her bullies, with her facial expression and body language betraying this fact in yet another piece of fantastic character acting. I’m not even sure that she managed to put two and two together when she finally realized that Legosi was standing behind her, either.

We then move into another hilarious scene as Legosi and Haru eat dinner together in the cafeteria, but both are scared stiff – Haru of this big carnivore who’s eating a steak (albeit not made of meat) in front of her, and Legosi of the fact that he’s finally come face to face with the girl that he hasn’t been able to stop thinking about for the past month. It’s a ridiculous combo and one that proves very effective in Orange’s adaptation.

BEASTARS episode 5 then finishes up with a heartwarming scene between Haru and Legosi that sees the two look into each other’s eyes for the first time, and sparks do indeed fly. It should be clear to any viewer that, from this moment on, things are going to change in their relationship – for better or for worse.

As I hinted back up at the top of this review, I had always thought that the change from the Drama Club arc to the Meteor Festival arc would bring about, in turn, a change in Studio Orange’s approach to adapting the original source material. This is because the Meteor Festival arc marks a decisive improvement in Itagaki’s writing, firming it up and giving it a lot more focus.

Although it is a shame that we most likely won’t get any more episodes quite as drastic as BEASTARS episode 1 was from here on out, if BEASTARS episode 5 proves anything, it’s that the resources no longer needed for such adaptation are being directed into production – mainly character acting and animation.

Finally, I’ll say to anyone that happens to be watching along with us that this should mark the moment where you should be getting excited for what happens next. Not only is this arc much better written than the last, but it also opens up the world significantly and introduces so many fascinating elements that have truly come to form the core appeal of Itagaki’s manga, currently releasing in Weekly Shonen Champion.

You can watch BEASTARS episode 5 via Netflix. Be sure to check out our features month on BEASTARS as well for exclusive interviews from series creator Paru Itagaki, the team from Studio Orange behind the anime, and more!