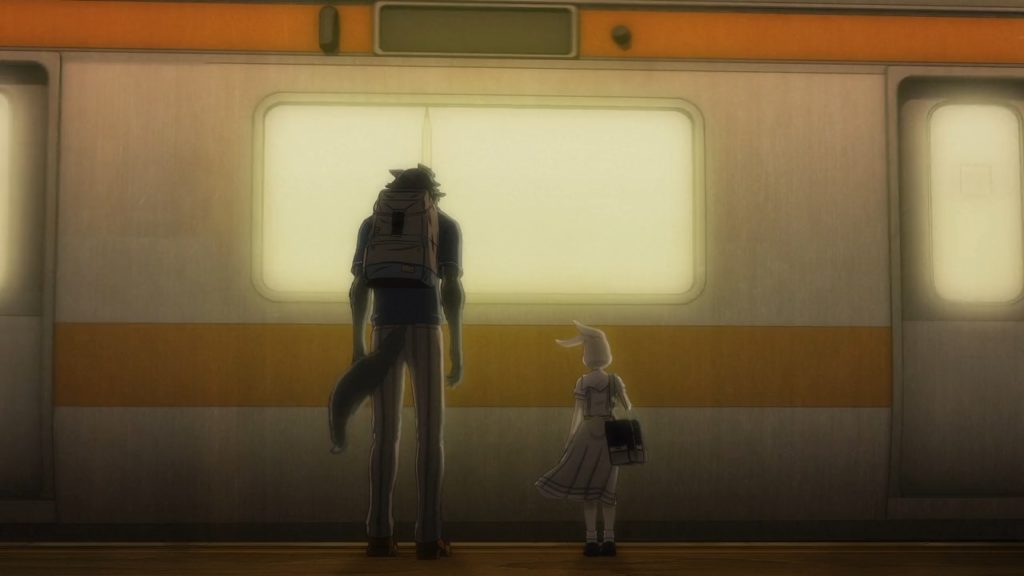 BEASTARS episode 8 gets into more of the series’ troublesome romantic relations as Legosi shares a special moment with Haru, Louis feels Juno’s passion in more ways than one as her worst fears are confirmed: that Legosi likes someone else, and a herbivore no less. With predation incidents and mysterious blackouts on the rise, it’s quite clear that all is not well in this crazy furry world…

Starting out with the Drama Club once more making preparations for the upcoming Meteor Festival, BEASTARS episode 8 immediately demonstrates some interesting adaptational choices.

Instead of following the manga more directly, Studio Orange choose to trim down the content of this opening segment, taken from chapter 29 of the original manga, by totally reworking the dialogue and thus forcing Legosi and Haru into their next scene a lot more quickly. They also choose to insert an anime-original scene introducing the mayor of the BEASTARS city much earlier on. 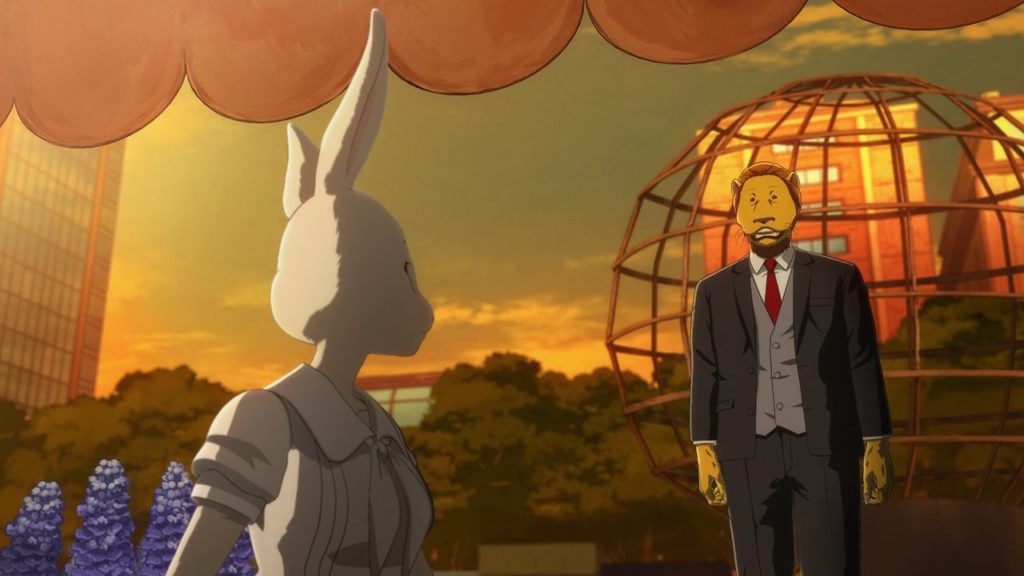 It is during this scene that Legosi’s voice actor Chikahiro Kobayashi, who has been doing excellent work throughout the series so far, has an absolute field day with the line “Because it’s dangerous outside” – making me chuckle no matter how many times I see it. 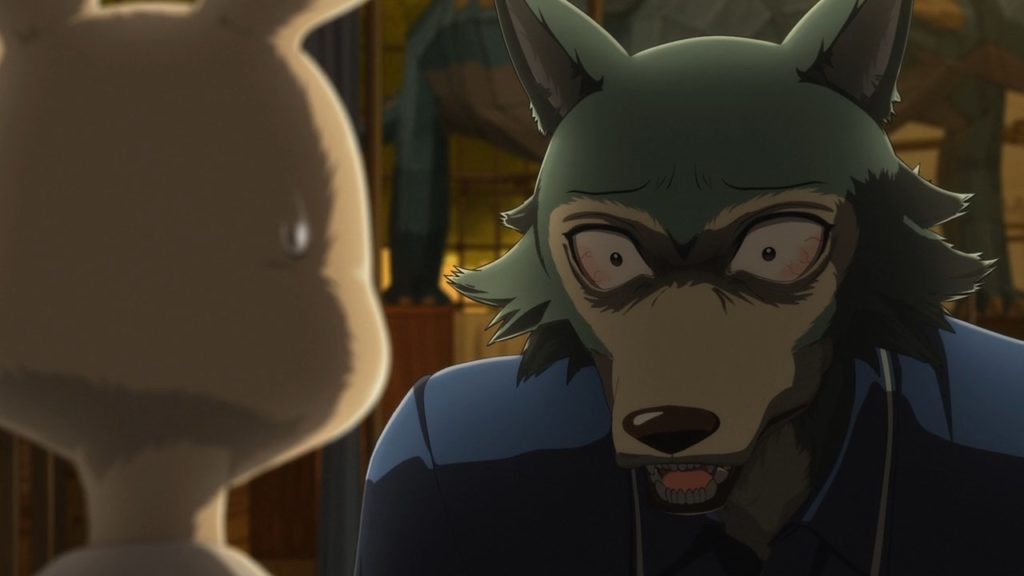 BEASTARS episode 8 then moves into the scene where Legosi escorts Haru home via the subway, due to the recent predation incidents that have made it clear that herbivores should not be walking about at night on their own. It’s interesting to note that this is actually the first time we’ve seen the subway in the series so far, as episode 6 skipped a scene from the original manga where Legosi made a scene at the ticket gate.

Studio Orange pay a kind of homage to this scene left on the cutting floor by inserting an anime-original scene into episode 6 where Legosi forgets to charge his IC card and he apologizes profusely to the other commuters, but it could be entirely unrelated. 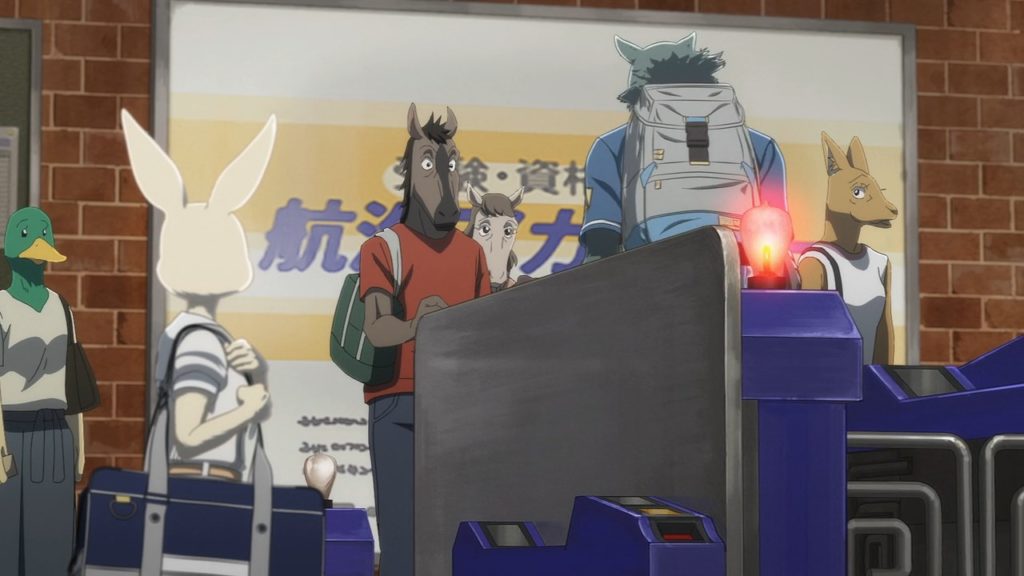 In any case, what’s important about this next scene is how it deepens Haru and Legosi’s relationship, which has finally begun moving once more following Legosi’s revelation last week that Haru is somehow involved with his upperclassman, Louis.

They talk about their first meeting, where Haru attempted to sleep with Legosi, for which Legosi chastises her for not taking enough care of her own body. Some great character animation is on display here, as Legosi awkwardly places his fingers on his lap and Haru has to jump in order to reach the subway seat as they wait for a train.

All of this reveals a sharp philosophical and moral difference between Haru and Legosi: one, being a carnivore, doesn’t understand what it is like to be constantly staring death in the face and therefore has a better sense of self-preservation than Haru perhaps does. The drama of this difference is only heightened as another train passes, noise buffeting and shadows playing on the characters’ intense expressions. 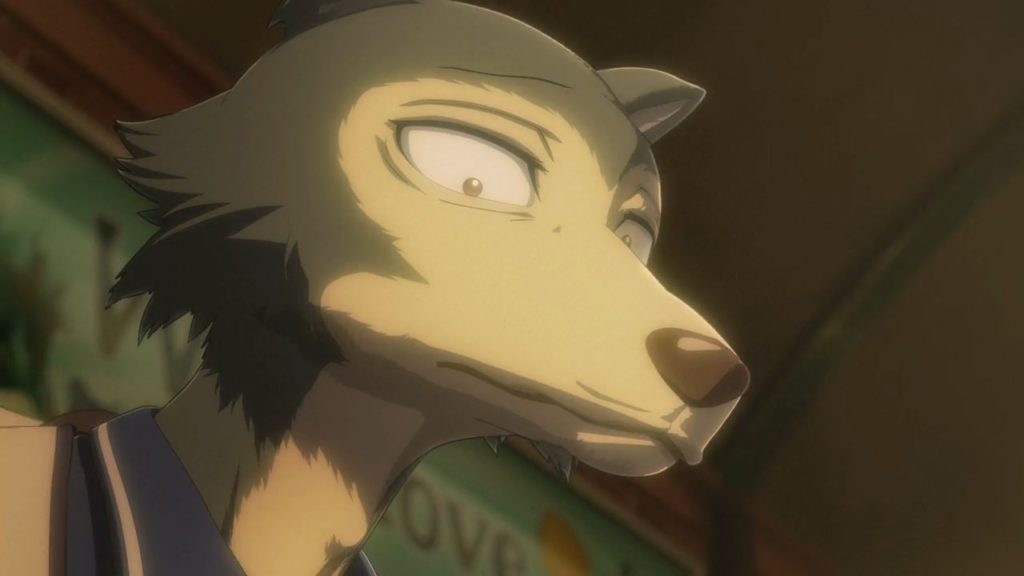 They then get into a fight where Legosi grabs Haru’s arm, which is quickly taken as the start of a predation incident by the rest of the wary commuters, on guard thanks to the recent news. If Legosi is caught then he’ll be presumed guilty, so Haru takes the lead and decides to flee.

Again, there’s a conflict between the two as Haru chastises Legosi for not taking the lead. But this has meaning beyond the literal – in a figurative sense, she wants Legosi to become the strong predator she knows he can be and, quite possibly, take the first step in their budding romance.

After a tense exchange as they’re fleeing, Legosi finally takes the hint and takes the lead in a beautiful slow-motion scene as his inner monologue plays. It’s taken almost verbatim from chapter 29 of the original manga, but it works perfectly well here. 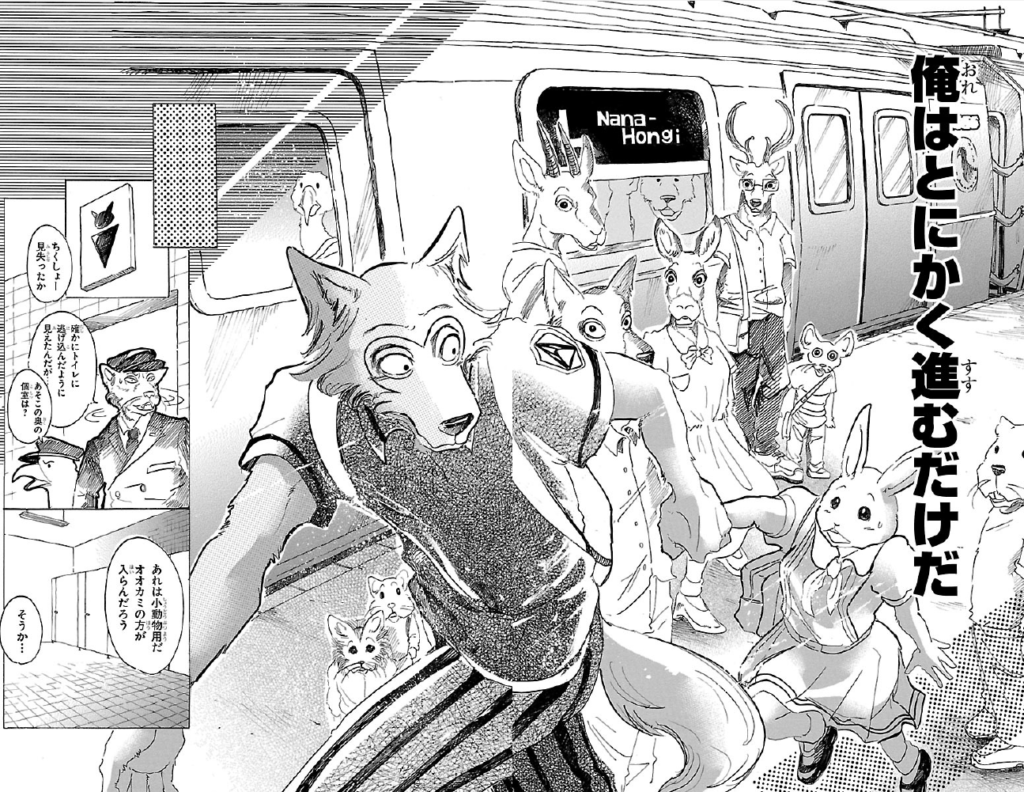 Moving into material from chapter 30, BEASTARS episode 8 then shifts into a tense scene where Legosi and Haru are hiding in a restroom cubicle from the searching subway guards.

The intimacy of this scene is really palpable as the camera takes Haru’s point of view and focuses on the minute details of Legosi’s figure, such as his Adam’s apple and his fingers. Sayaka Senbongi’s throaty narration as Haru also helps to achieve this. 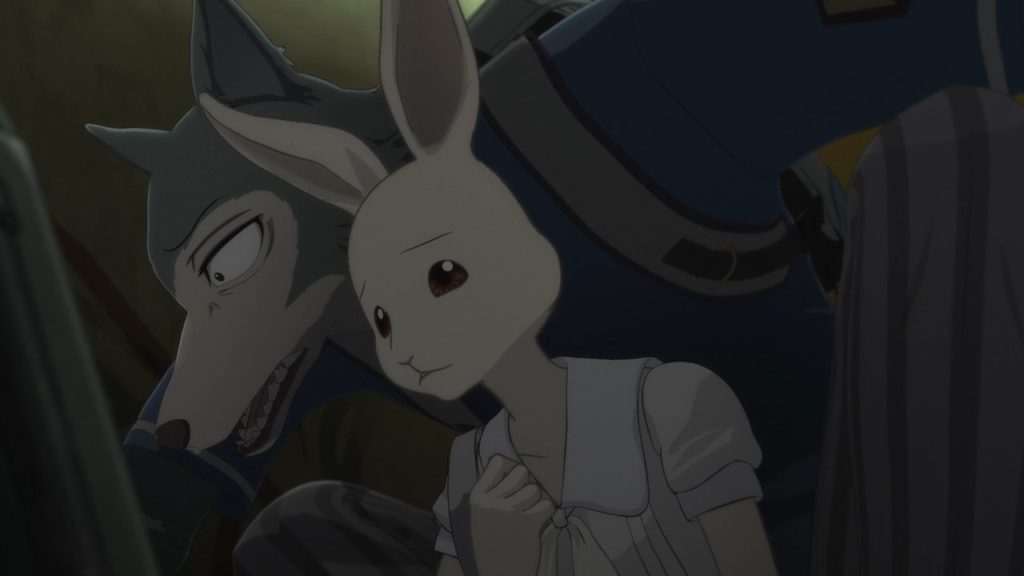 Clearly, there’s a connection being born here between Haru and Legosi that is more than mere friendship. This fact is confirmed by the scenes of flirty banter between the two that follow – although Legosi seems mostly unaware, as usual.

But Haru has competition. The young grey wolf Juno has been gunning for Legosi’s heart ever since her introduction in episode 5, and she’s not about to let anyone get in her way – even the prized honor student of Cherryton Academy, Louis the red deer.

The focus of BEASTARS episode 8 focus shifts from Legosi to Louis in a sharp transition as Bill accidentally cuts Louis’ hand during rehearsals, and so sharp and rapid is this scene change that I honestly thought that this might be the first case of clumsy adaptation from Studio Orange – but, in actual fact, chapter 30 of the original manga plays out in exactly the same way. 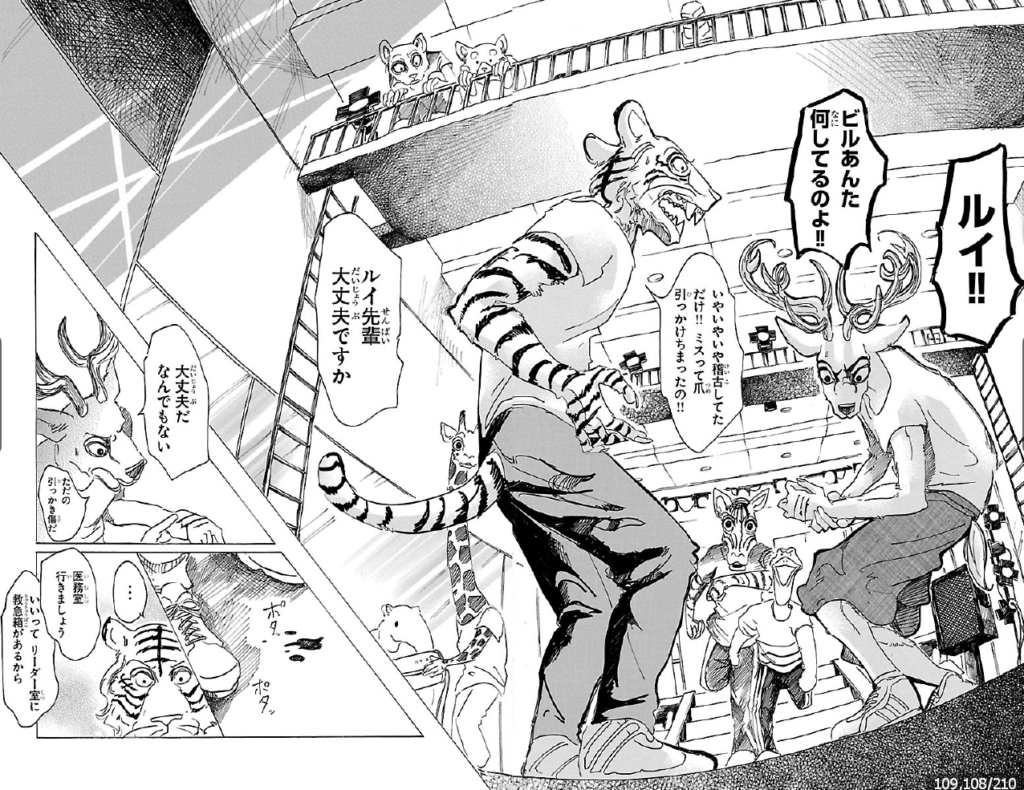 What’s strange, however, is that Studio Orange decided to cut the scene that comes straight after this in the original manga, as Bill confronts Louis for a reason I won’t divulge. This is a shame as it’s honestly one of the most memorable moments in the series and an important one for Louis’ character development, but I’d imagine that this scene will be brought back in later episodes (possibly next week) just like has happened in previous weeks.

Nevertheless, it is thanks to this transition that BEASTARS episode 8 places us in the shoes of Louis as he perceives the rising profile of the young grey wolf, Juno. She’s been inspired by her love for Legosi and has decided to start making more of an effort, upping her bubbly personality and bringing the Drama Club together in the process.

A darker side to this new Juno is, however, demonstrated as Louis encounters her in the rehearsal room after practice. She’s cleaning, alone, under a spotlight when she asks the red deer to help her with her dance practice for the Meteor Festival. Things quickly take a turn for the worse, however, as Juno pins Louis to the ground in a terrifying confrontation for the young herbivore. 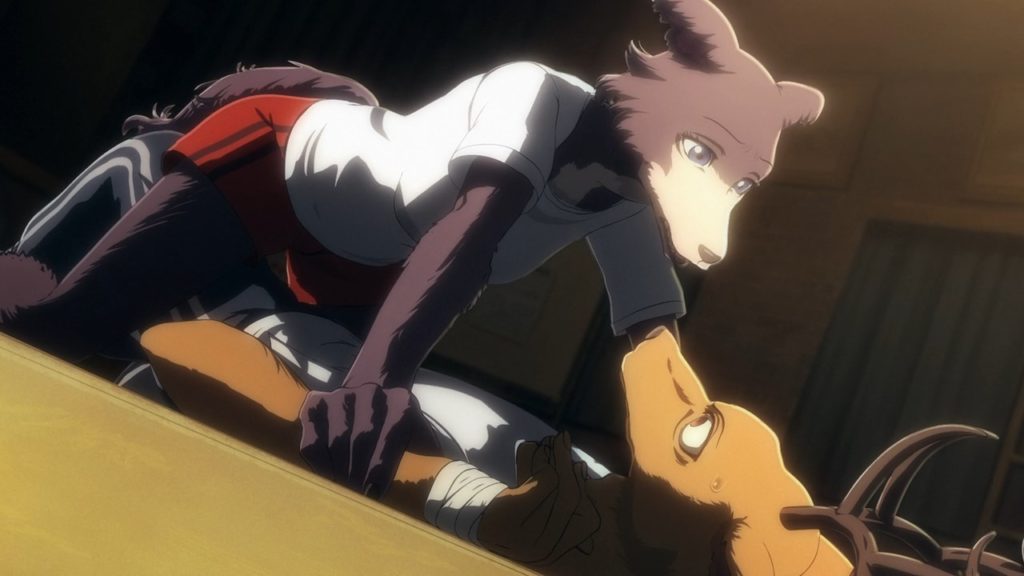 The tension is palpable in this scene as Juno vaguely threatens to eat Louis, but even more surprising is her declaration that she will become the next Beastar, surpassing her upperclassman and stealing Legosi’s heart in the process.

From this, it should be quite clear that Juno is going to become quite an important character. Studio Orange’s creative choices with regards to lighting, as well as fantastic performances from Yuki Ono and Atsumi Tanezaki, really sell the material covered in BEASTARS episode 8 that could be quite rightfully considered as a turning point for the otherwise seemingly innocuous character.

Nevertheless, Louis does manage to get one up on Juno. Through his implications, he plants the seed of doubt in her head that Legosi might already be interested in someone else. Whether or not this is just a lucky guess or an insidious lie I’m not quite sure, but his implications are quickly shown to be true in the next, final part of BEASTARS episode 8.

We return to the site of the Meteor Festival where the Drama Club is once more making preparations. Juno and Legosi share a scene in front of the festival lantern, couples who put a candle at the foot of which will supposedly be together forever, and Juno is just about to ask Legosi if he’d like to do this with her when the lights suddenly go out. 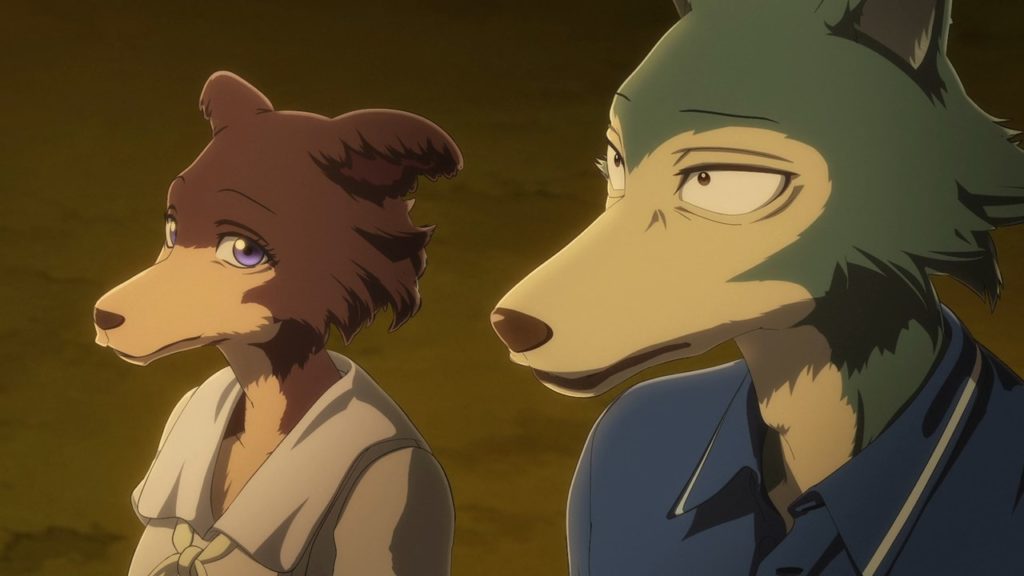 Predation incidents have recently occurred in such circumstances, as some herbivores are defenseless in the dark, so very quickly the carnivores of the Drama Club spring into action, forming a defensive circle around their vulnerable classmates. Legosi then realizes, however, that Haru might be on her own and sets out to find her.

There’s an interesting addition to the material of the original manga in BEASTARS episode 8 that actually makes a lot of sense as Legosi first goes to the Gardening Club tent to pick up on Haru’s scent, before eventually tracking her down to the outskirts of the festival site, behind a tree. There isn’t much room to be happy, however, as it is Louis’ name that Haru calls out as Legosi comes to rescue her. 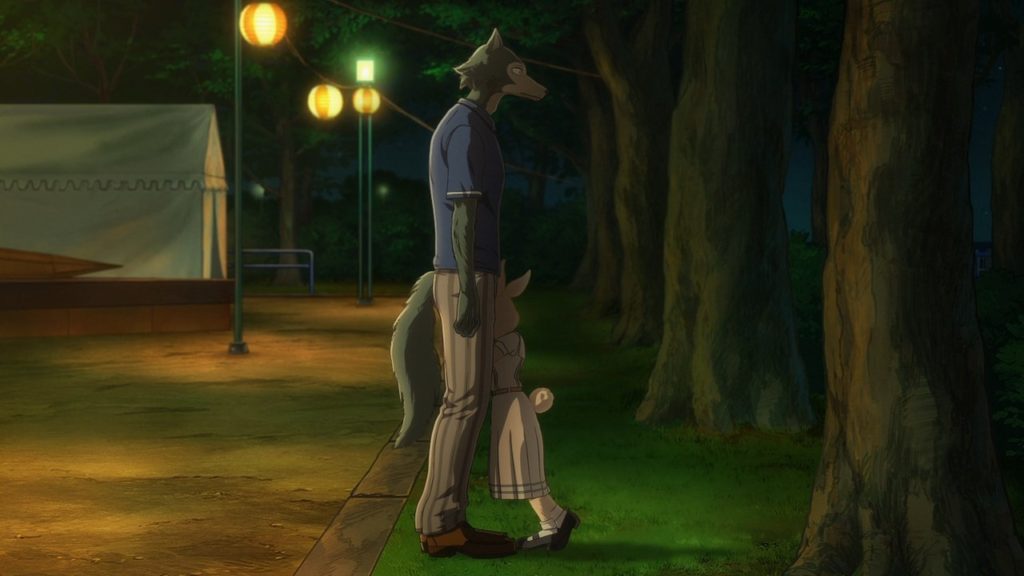 This calls back to the final scene of last week’s episode, where Legosi felt intense jealousy at Louis’ involvement with his love interest, the fallout from which is evident in the two characters’ interactions around the midpoint of this episode. Legosi is stunned into silence for a second, and Haru very quickly takes the hint as the lights turn back on, apologizing profusely.

It is interesting to note that, in the original manga, Haru’s location was already forecast to the reader, as chapter 31 showed a tender moment between the dwarf rabbit and the red deer under the very same tree where Legosi finds her. While her location still makes sense in BEASTARS episode 8, it is unfortunate that Studio Orange have lost a little bit of that pertinent context – that is, however, given that they don’t insert the skipped scene into a later episode.

Nevertheless, the damage has been done. Legosi is now even more jealous of Louis and even more sure of his love for Haru, evidenced by his loving gestures towards her. And, as it turns out, there’s a spectator to all of this – Juno, who followed Legosi in the darkness and expresses her incredulity at the sheer possibility that her fellow grey wolf might be in love with a rabbit. Surely not. Right?

Unfortunately, the significance of this final revelation isn’t exactly as palpable as it could have been – Juno’s incredulous inner monologue is delivered with an innocence that doesn’t come across as pressing as it really should be, and, just as the drama is setting in, we cut to the credits.

While this is more or less the way that the revelation is presented in chapter 32 of the original manga – a focus on Legosi with Juno’s thoughts in text boxes – it does act as the final whimper for perhaps the most mixed episode of BEASTARS so far. 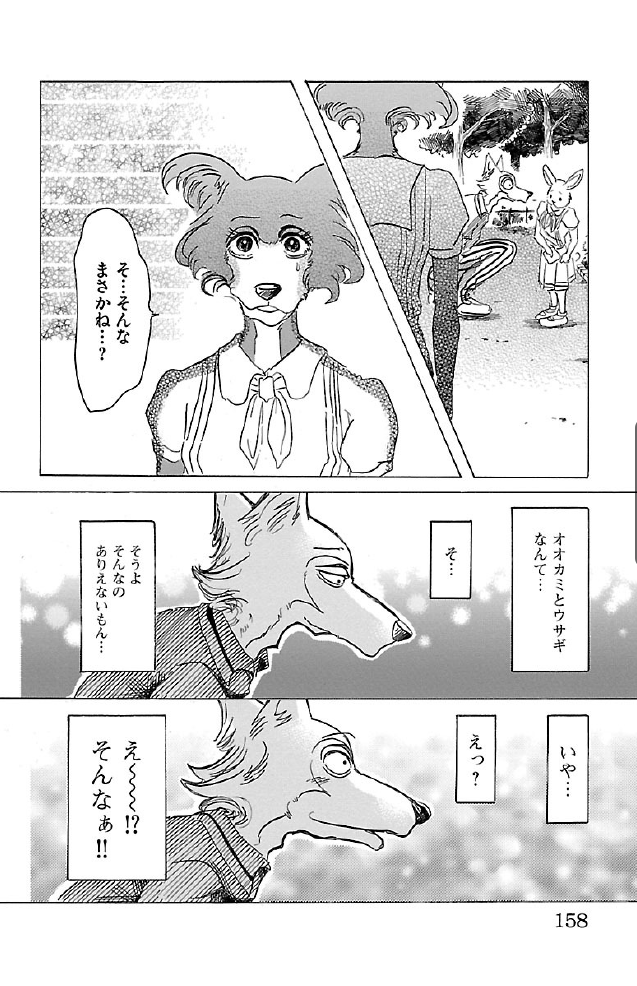 BEASTARS episode 8 skips so many key scenes that were present in the original manga, particularly those regarding Louis and his dark past, that viewing this episode with an eye to the manga can’t help but leave me a little disappointed. Even if the majority of these scenes will most likely be coming back next week, it still makes for an episode 8 that is decidedly less effective than previous weeks.

You can watch BEASTARS episode 8 via Netflix. Be sure to check out our features month on BEASTARS as well for exclusive interviews from series creator Paru Itagaki, the team from Studio Orange behind the anime, and more!