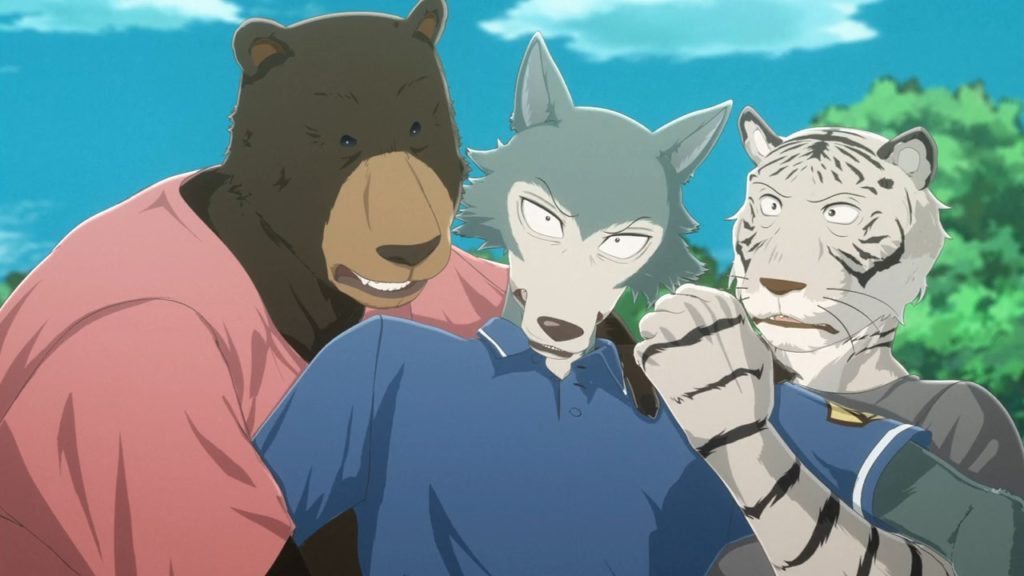 BEASTARS episode 9 shifts focus from Legosi to Louis, the star student of Cherryton Academy, as we get to see his dark past before coming back to the present to see the repercussions of that upbringing on the present – will Louis be truly able to leave Haru to a dismal fate at the hands of the Shishigumi, or will Legosi have to step in and save the object of both of their affections? Just how far is Louis willing to go to become a Beastar?

But before we get to that, BEASTARS episode 9 starts on a very strong note as Studio Orange craft yet another visually engaging sequence based around memories and dreams, much like episode 7’s treatment of Haru’s dream. Yet despite the similarity in approach, this sequence still has plenty to offer on its own merits.

For one, it’s lovingly crafted in the style of shadow puppet theatre, which gives the entire sequence a tangibly oppressive atmosphere and overall darkness. The use of color in this sequence is also very effective, as it moves from orange, red and finally to blue in tandem with Louis’ state of mind as he moves from fear, bloodlust and finally to peace. It’s a beautiful piece of visual storytelling that once again signals the sheer amount of talent and passion present on the BEASTARS anime team over at Studio Orange. 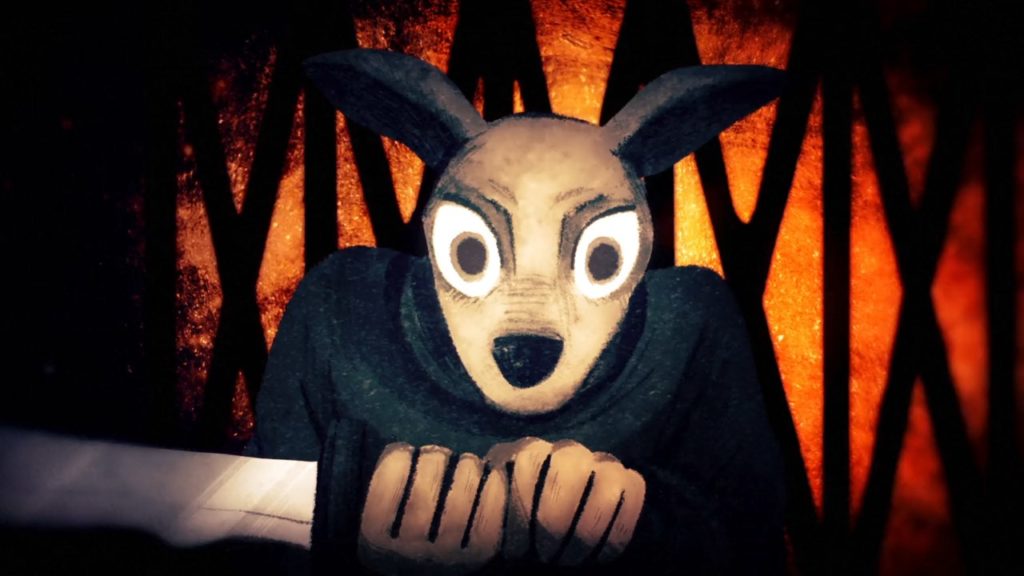 From an adaptational perspective, it first seemed to me that this segment represented a move on Studio Orange’s part to draw together all of the segments of the original manga regarding Louis’ past – which were conspicuously absent from last week’s episode – and place them more neatly in BEASTARS episode 9.

This segment does largely get that job done and is all the more focused for it, but it still fails to include many scenes from the original manga regarding Louis’ past that have yet to be incorporated – including possibly one of my favorite scenes of the entire manga, which offers us a glimpse of the ‘true’ Louis underneath his honor student mask. It’s unlikely that this scene will be included going forward either, as the story has already moved way past that point.

There’s also the very small nitpick that a lot of the mechanics of Louis’ escape from the back-alley market aren’t conveyed very well by the shadow puppet animation, such as how he was pushed out from the elevator and how he chose to kill himself rather than face the carnivores and death at their hands. But considering the sheer amount of creativity on display during this sequence, I’m willing to give Studio Orange a pass.

Moving on from Louis’ past, BEASTARS episode 9 then goes on to explore how this tragic beginning has come to affect the red deer’s outlook and attitudes in the present.

Simply put, Louis carries an immense amount of pressure on his shoulders as both heir to the Horns Conglomerate and a rescued inmate of the back-alley market. He feels a great sense of duty to society and his family to do the best he can and change the world – in other words, he feels like he has to become a Beastar.

But this aspiration is rocked by the shocking turn of events in BEASTARS episode 9 that sees Haru, the object of Louis and Legosi’s affections, kidnapped by the lion gangster group of the Shishigumi and brought to their boss to be eaten alive. 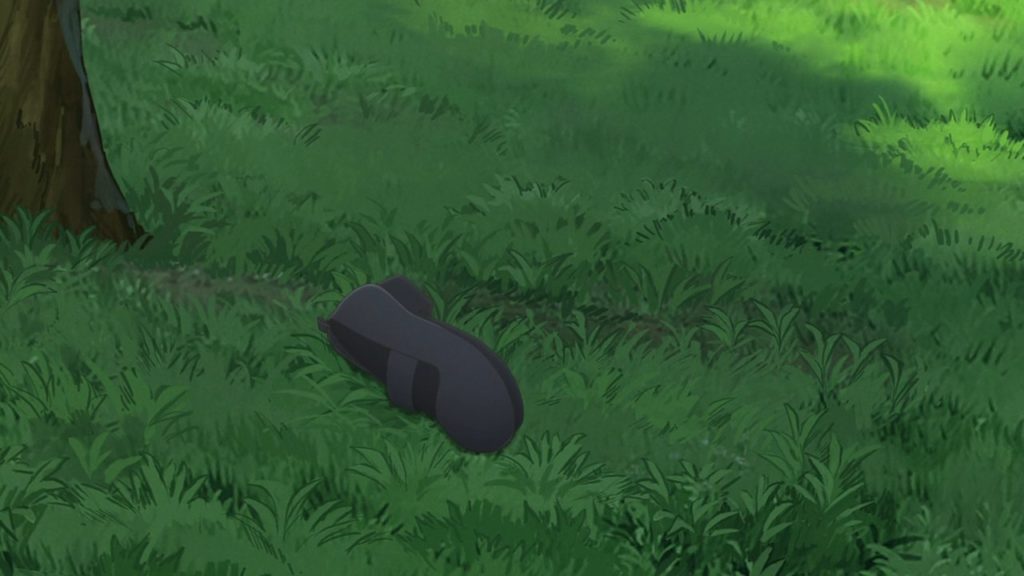 This conflict is presented to Louis by the mayor of the BEASTARS city (which remains unnamed), who asks the prospective Beastar to let this incident slide in order to protect the peace of the city – the Shishigumi own and operate large portions of the back-alley market and the criminal underground, and making any kind of move against their provocation might provoke an all-out civil war. Of course, the mayor knows nothing of the fact that Haru and Louis are romantically involved.

Furthermore, it is worth noting that the representation of this conflict in BEASTARS episode 9 comes with numerous adaptational changes from the original manga in what may be one of the most drastic episodes yet, ever since the first.

Not only is the mayor’s presence much more pertinent thanks to Studio Orange’s decision to include him in the story a little earlier on, but Haru’s treatment at the hands of the Shishigumi is also completely different – the criminal organization’s boss is much more forceful and violent in the original manga, whereas in the anime he is much more restrained, preferring instead to intimidate Haru into undressing, and then take a bath. I can’t help but wonder if this is due to content restrictions of TV broadcasting, the effects of which we already saw in episode 7.

In any case, it is by seeing the treatment of Haru at the hands of the Shishigumi – subdued in comparison with the original manga or not – that we are immediately agree with Legosi’s view of the situation – because while BEASTARS episode 9 is largely focused on Louis and exploring his point of view, there is no shortage of good Legosi content this week, as always.

We get to see the intrepid grey wolf protect his senpai from a potential carnivorous assailant in a sequence that is much easier to understand in the anime than it is in the original manga, since Paru Itagaki’s original narrative jumps back and forth in time, but we also get an adorable confession scene between Legosi and Haru that had me chuckling the longer it went on. 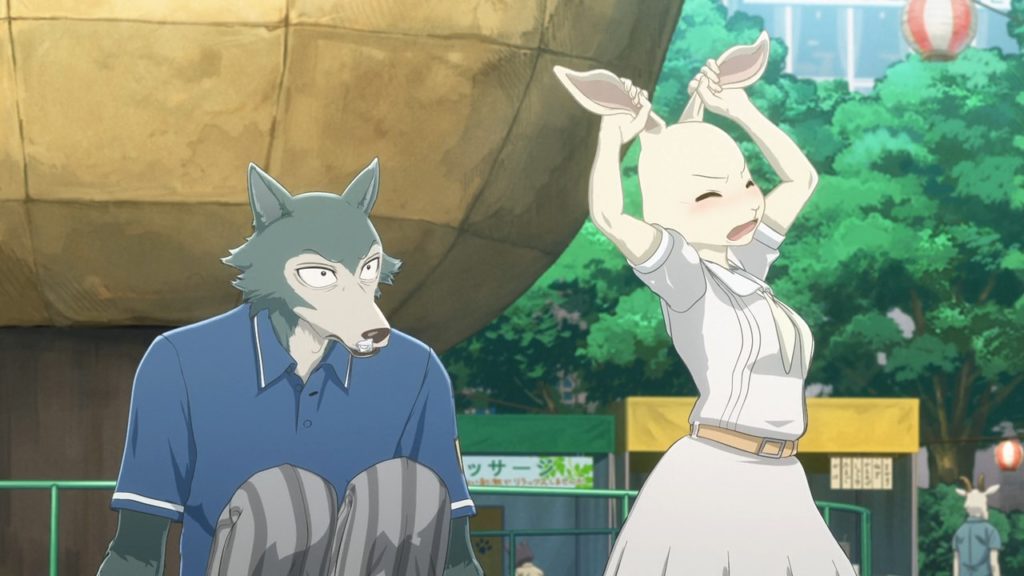 In any case, we are, as viewers, completely on the side of Legosi in the conflict that develops between him and Louis on the issue of rescuing Haru. Why should she be left to her fate in the name of peace? Why shouldn’t our protagonists at least try to save her? This conflict then escalates from mere words to actions, as Louis and Legosi start throwing punches. Needless to say, a sharp divide has been created between the two. 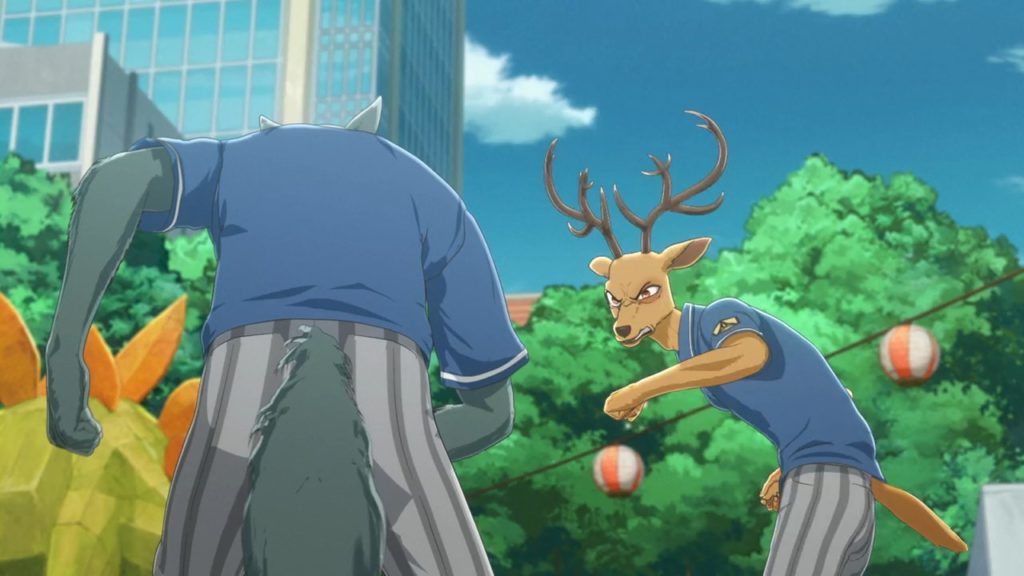 Of course, this has been a long time coming. Sharing a love interest was never going to be sustainable in the long term, and Legosi has long since been jealous of Louis’ relationship with Haru.

But there is a sense of narrative and philosophical significance to this conflict that has been building from the very beginning. Just as Haru remarked in episode 8, there’s no way that an all-powerful carnivore can understand the thought process of a comparatively weak herbivore – a creature that has to be prepared for death at any moment. Perhaps we are seeing this issue too much through the eyes of a carnivore, given that Legosi is our protagonist.

Nevertheless, this conflict in BEASTARS episode 9 signals a larger trend that saw vivid expression in episode 4, as Legosi begins to step from the shadows and into the literal limelight. Legosi is proving himself more and more the man of action – one that will not only capture the heart of the one he loves, but also the heart of the very society that he lives in.

Needless to say, things are going to be very different from here on out. Next week will see Paru Itagaki’s story shift gears once more, just like it did around episode 6, as Legosi attempts to save Haru from the clutches of the Shishigumi. Expect lots of blood and gore – this isn’t going to be for the faint of heart.

But on a broader level, BEASTARS episode 9 stands out as not only one of the most transformative episodes of the series thus far, but also a marked improvement on last week’s somewhat meager offering. Consider me excited for next week.

You can watch BEASTARS episode 9 via Netflix. Be sure to check out our features month on BEASTARS as well for exclusive interviews from series creator Paru Itagaki, the team from Studio Orange behind the anime, and more!