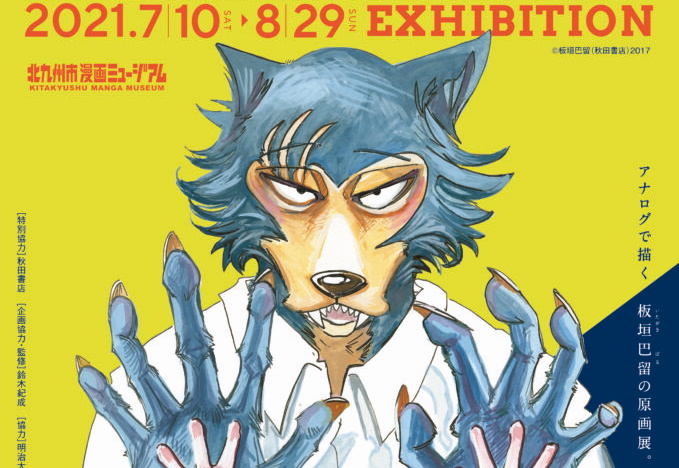 Even after receiving several awards and inspiring two seasons of anime by Studio Orange, the original BEASTARS manga by Paru Itagaki has never received an exhibition. Until now.

True, the anime spawned one such event in 2019 in collaboration with TOEI, but this BEASTARS exhibition will mark the first time that any of Paru Itagaki’s original artwork has been on display. Set to open 10 July through 29 August at the Kitakyushu Manga Museum in Fukuoka prefecture, this is a unique opportunity given that BEASTARS was drawn entirely using analogue methods, as opposed to digital. That is becoming increasingly rare in this day and age.

Ostensibly, this exhibition in Fukuoka is meant to celebrate the series coming to an end in the pages of Weekly Shonen Champion. That happened last October, though, begging the question of why it took so long for something like this to materialize. In fact, why are we only getting the first BEASTARS exhibition now, several months after it ended? It seems like a bit of a shame, especially considering the quality of Paru Itagaki’s art.

Since the very beginning, Itagaki’s anatomic attention to detail has been the star of the show. Obviously, the anthropomorphic character designs are also unique, but they wouldn’t work nearly as well if the artist didn’t have such a strong grasp of the human or humanoid form. What’s more, this art style improved as it went along, simplifying some of the details while retaining all the overall charm.

If the production materials on display as part of this BEASTARS exhibition are taken from across the entire serialization, then you might get a chance to see this firsthand. To be honest, that’s the most exciting part.

The BEASTARS exhibition will open in Fukuoka’s Kitakyushu Manga Museum on 10 July. With any luck, it’ll go nationwide after it’s done. For more information, please visit the official website.