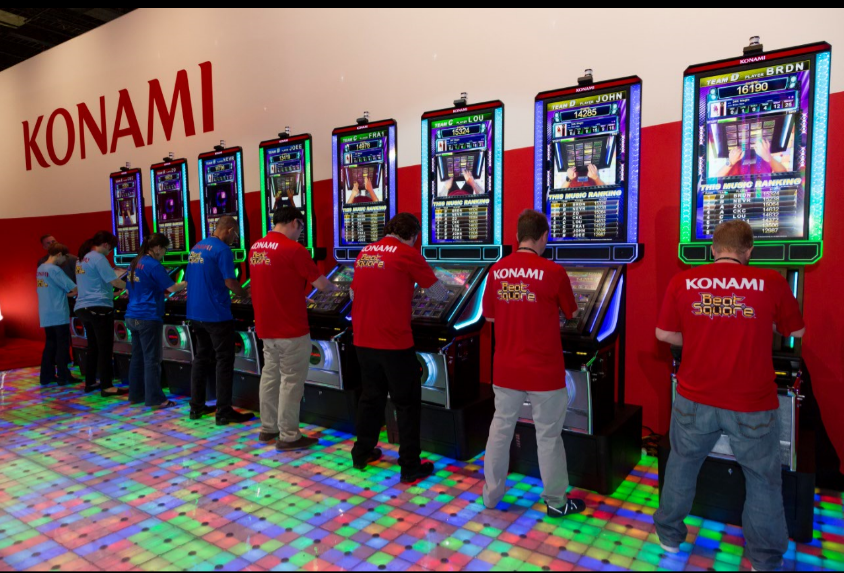 Exactly like Jubeat/JukeBeat, Beat Square challenges players to play, compete, and prove their skill in a game of rhythmic coordination across a lighted touch pad comprised of 16 square buttons. Players compete simultaneously during tournament mode and earn cash during single player mode as well. As announced at the G2E 2017 show by Global Gaming Business, Beat Square has been awarded Best Slot Product in the 2018 Gaming & Technology Awards, an absolute first for a rhythmic dexterity skill-based game.

Beat Square will feature a mix of Konami original tracks spread across a wide spectrum of genres as well as popular hits. To date, Konami has shown ’24K Magic’ by Bruno Mars and ‘Ain’t It Fun’ by Paramore, a long with an exclusive Country song titled ‘Reckless Abandon’ from Whistling Dixies which was recorded specifically for Beat Square. More licensed tracks will be announced at a later date, along with tracks from local artists. The tracks last for 45 seconds in single mode and 90 seconds in Tournament mode. Up to 8 players are allowed to enter where score is kept and payout will be determined. How well your timing is definitely affects score and the timing window seems very tight from what we’ve seen.

“The excitement surrounding Beat Square has been incredible. Crowds lined up to join the tournament, top players kept coming back to defend their high scores, and eSports-style competitors teamed up to attempt some of the most challenging songs,” said Steve Walther, Senior Director, Marketing & Product Management.

eSports style events have been mentioned before with the news leading up to the release of beatmania IIDX 25 CANNON BALLERS and even after with the Konami Arcade Championship, but it does seem like Konami is making tournament speak spread wide across both areas of gaming, and we’re seriously excited. Beat Square is set to release later this year and we’ll be sure to provide location and track listing as soon as it becomes available!