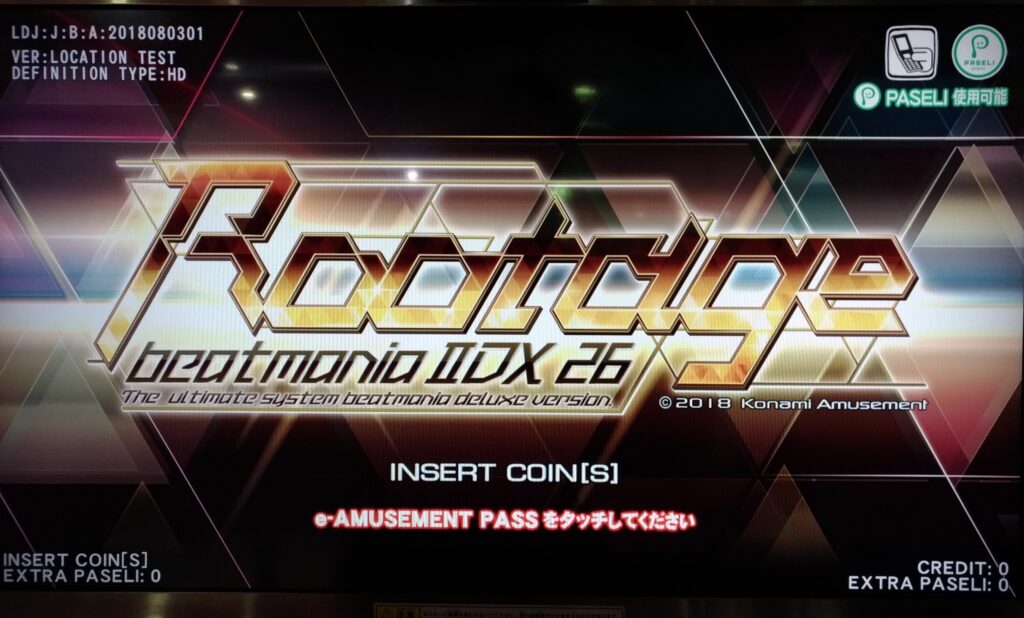 The newest (26th!) version of beatmania IIDX entered its location test phase 8/3, running through this weekend in Japan. In typical Konami fashion, of course, it was announced just a few days prior.

As usual with most location tests, randomly-numbered tickets are given out at 8:30am, with your position in line only counting towards the number of tickets given out.

I headed down to GAME Silk Hat DICE in Kawasaki, along with our friends from OTAQUEST and Attack The Music to see how this version stacked up to recent releases.

Be sure to check out OTAQUEST’s write-up on the location test as well,(http://www.otaquest.com/beatmania-iidx-26-impressions/) which highlights some impressions from a beatmania veteran player and what this version feels like in comparison.

In my case, I was lucky with copula, got #82 for SINOBUZ, and #51 last year. This time around, I got a moderately okay number, taking into consideration that there were 96 people waiting at 8:30 am when they handed out the tickets. (There were only 86 people on Saturday, by the way. Having more on the 1st day is pretty intense.)

As usual at GAME SILK HAT DICE, there were still another 30 minutes to go before the doors opened and the test began. After grabbing an energy drink, water, and a protein bar for POWER REPORTING, at 9:00 am, the shutters at the entrance opened up, and eager players headed inside! 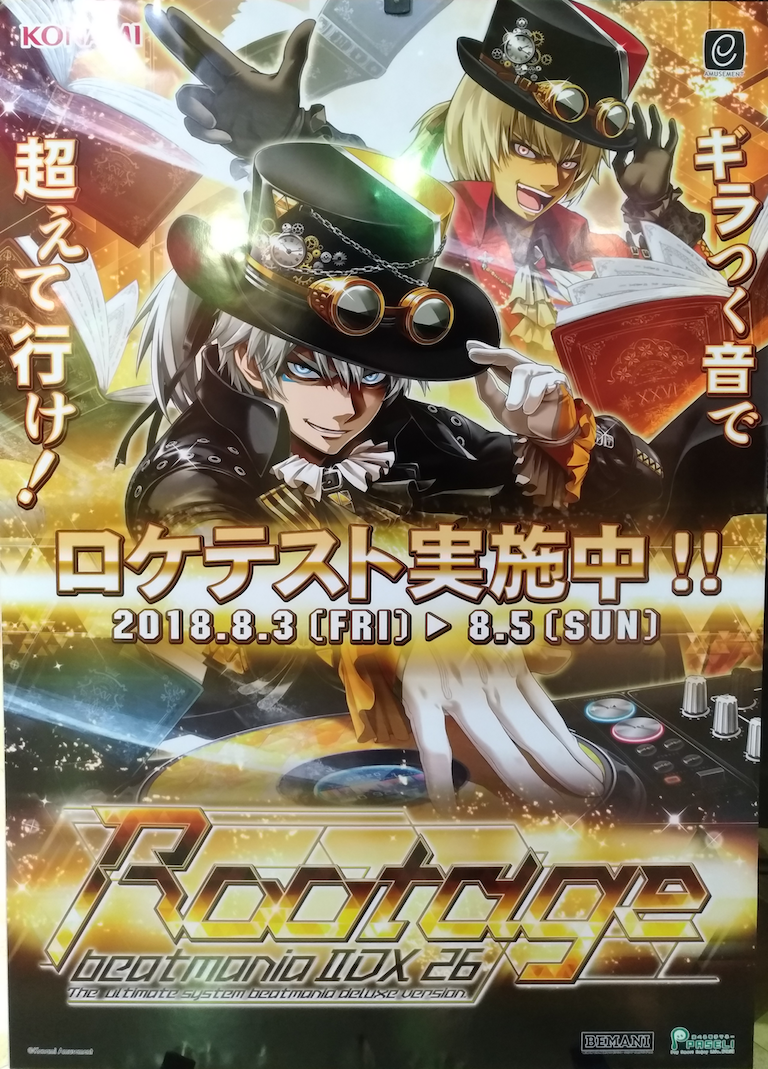 Thankfully, unlike with the last 3 location tests in the past month, Rootage got a dedicated poster design, showing that clearly (as usual) BEMANI Designer “GOLI” put a lot of work into the character designs, showing off the game’s main visual, which I can only describe as “Future Steampunk Library”.

The cabinet itself had a new marquee and side pop design (perhaps placeholder since there are no female characters shown?) as well: 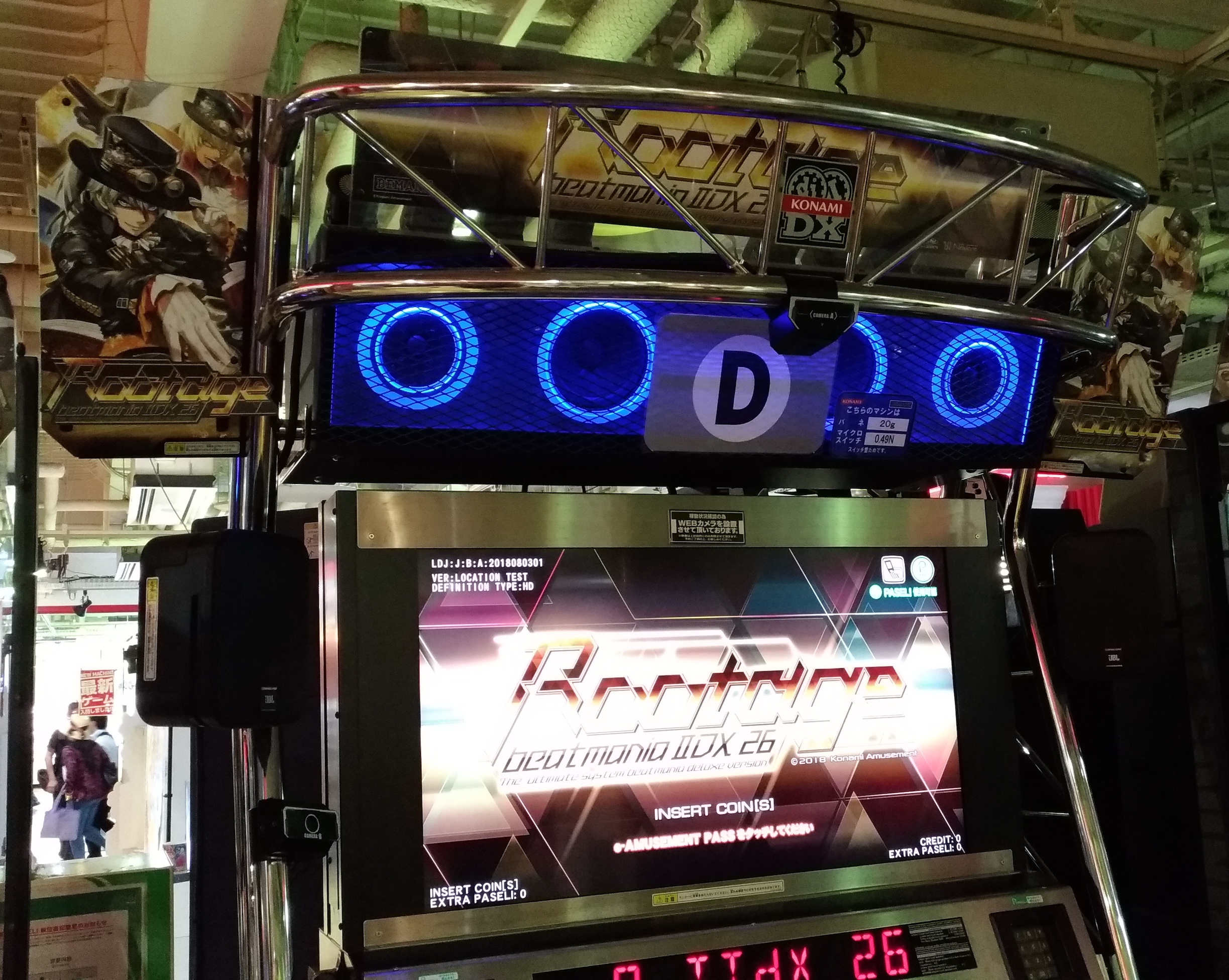 The location test notebook also shares the same artwork, with nothing on the reverse side: 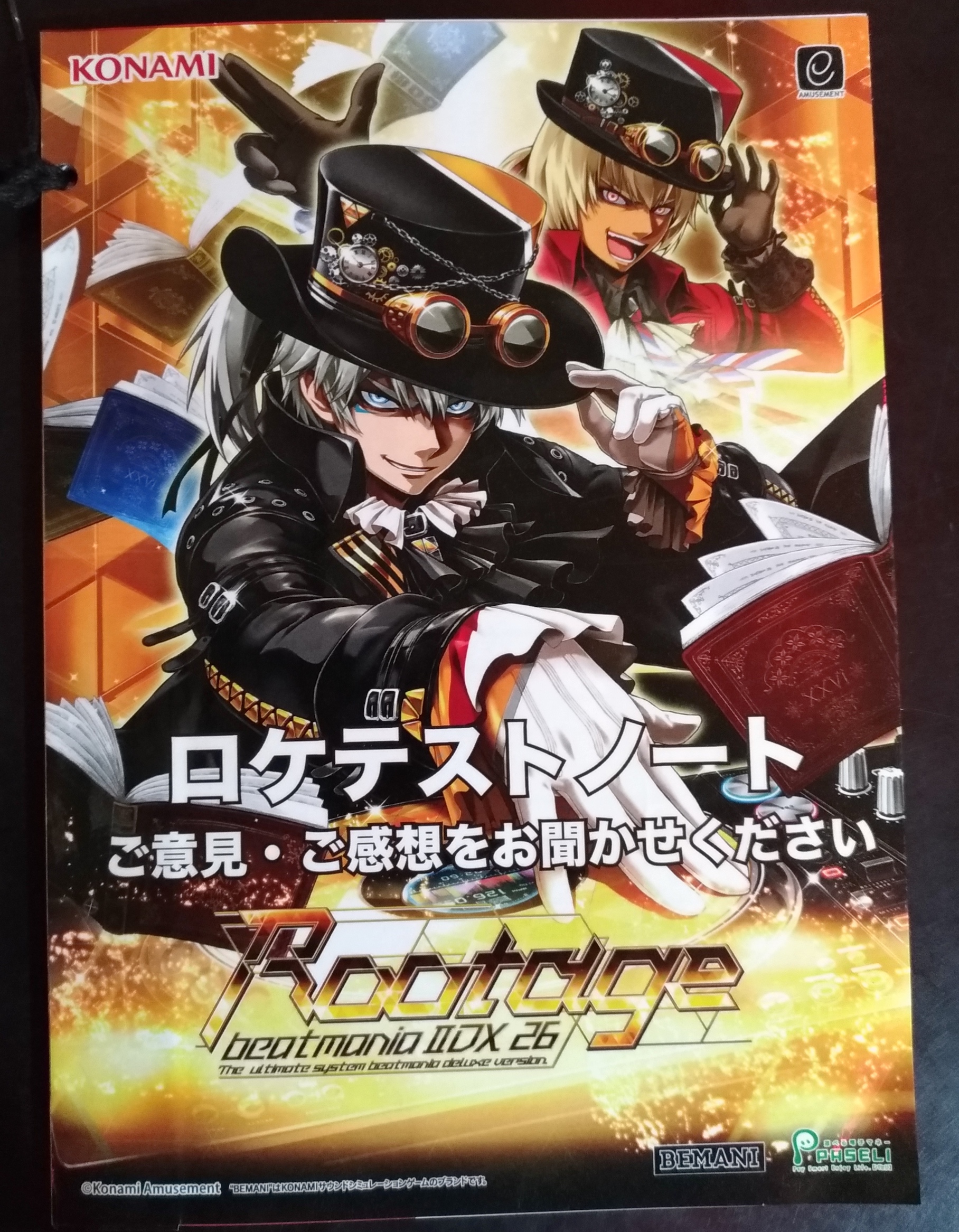 Also of note, the “How To Play” insert graphic which has changed almost every version seems to have been given the generic treatment, possibly indicating that this part will no longer be part of the upgrade kits: 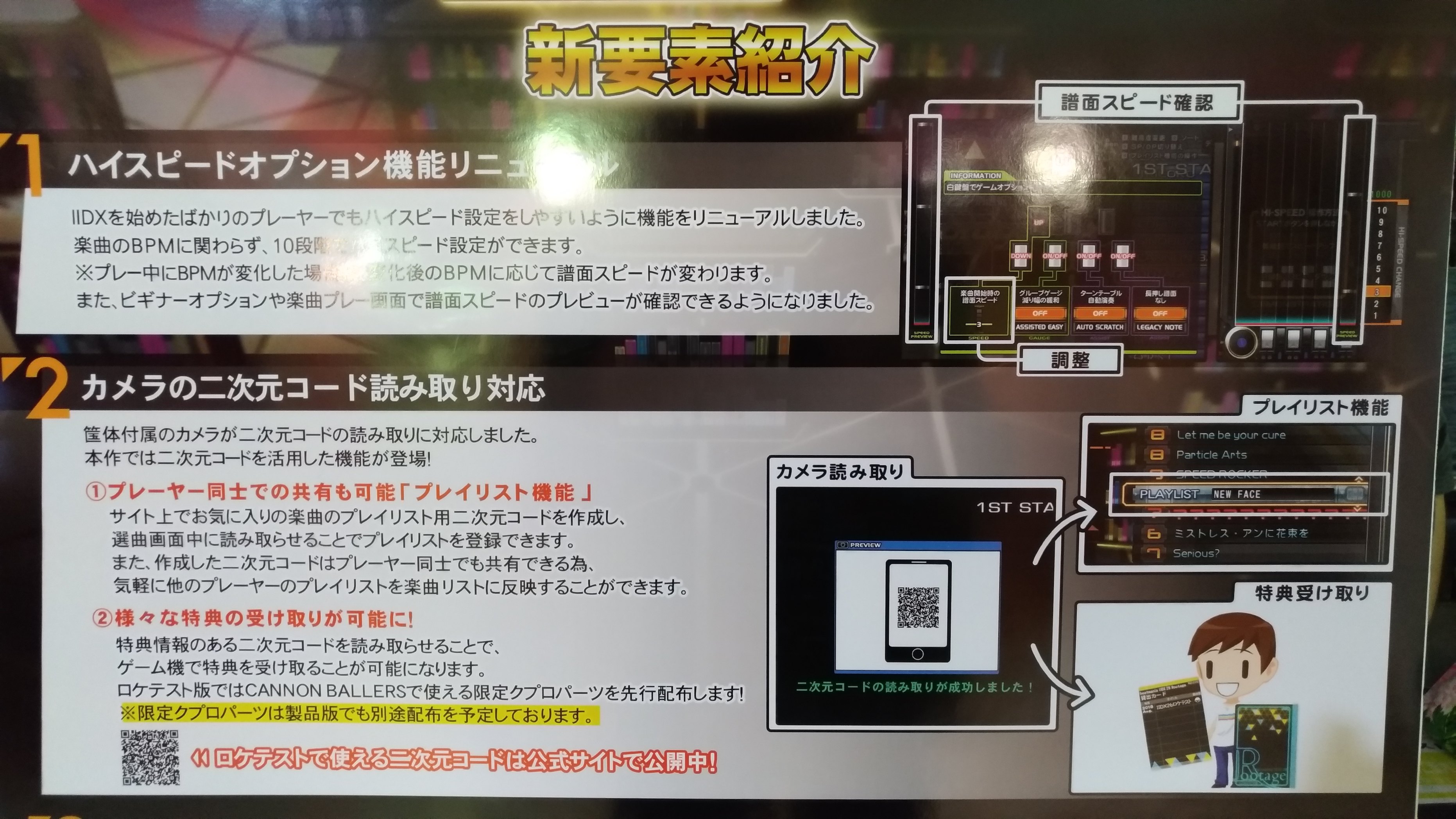 ① HI-SPEED Renewal
While the Floating Hi-Speed system is still around, the “Normal” Hi-Speed has been totally overhauled. Now there are 10 HS settings, and all scroll the same regardless of the song’s BPM. This means that HS4 on a 200BPM song and a 150BPM will look the same. Basically, this is an easier way for new players to find a Speed setting that works for them.
NOTE: BPM CHANGES STILL HAPPEN. This is not a “C-mod”.
You can also preview the scroll speed before/during the song.

② QR Code Scanning
You can easily share a “Playlist” of songs with other players using this function, holding up your phone or other QR code to the game’s built-in camera. Also, for anyone playing Rootage this weekend, a Special Qpro parts set for use in CANNON BALLERS is given out. 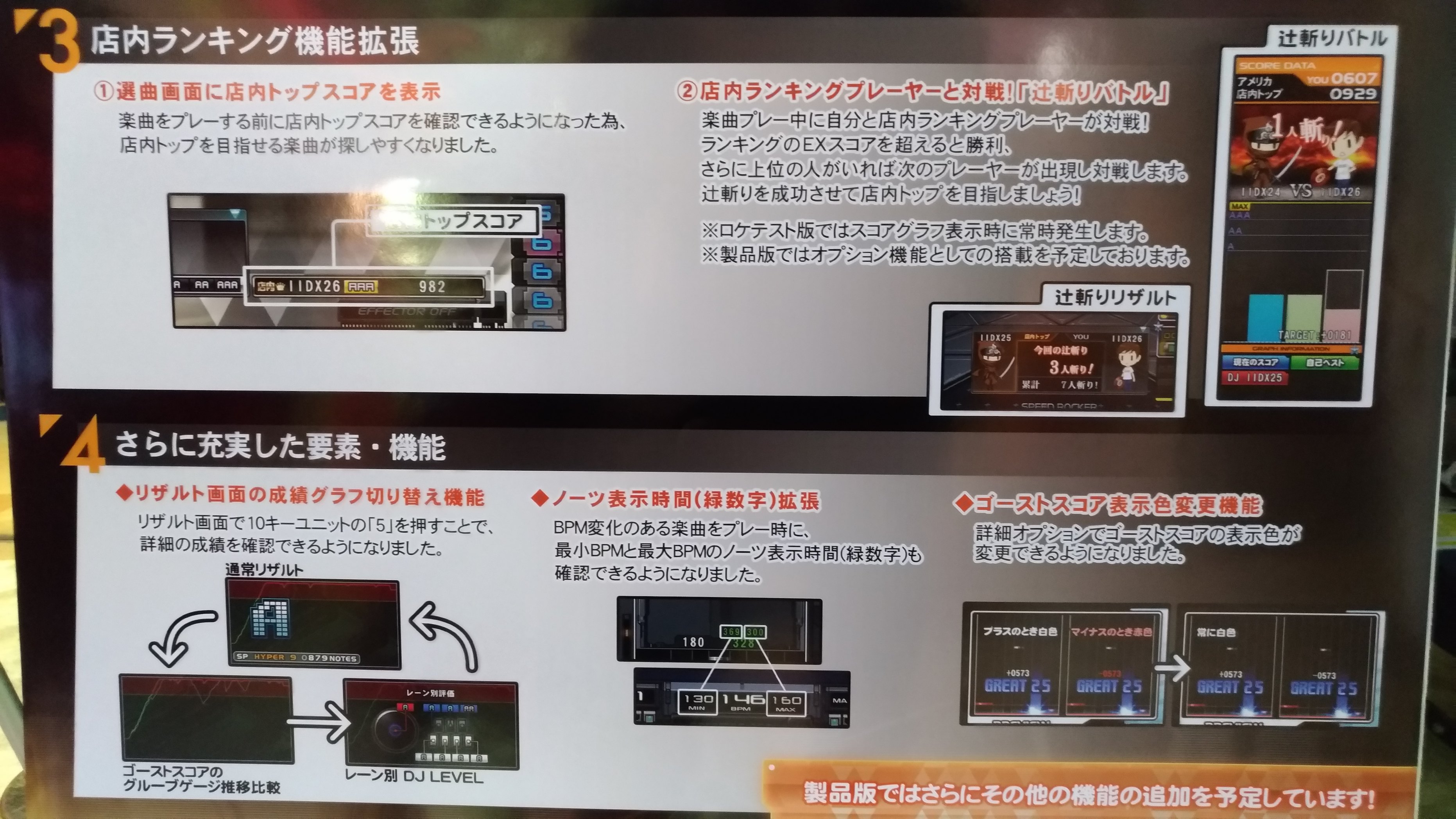 ③ Shop Ranking Improvements
The Top Scorer is shown on the Song Select screen. And, a new “SlashBattle” frame will show each of the store players, as you beat their EX score on the way to #1. (Optional on final release)

④ Other various functions/ QOL improvements!
・The Result Screen can cycle through Ghost Comparison and key accuracy displays
・Green number now displays for minimum/current/maximum BPM of each song!!
・Ghost Score numbers can be switched to display in white only

(Thank you to the players who helped me complete this list!
このリストを完成するの手伝ってくれた皆さん、本当にありがとうございます！)

(* songs have colored backgrounds, and are most likely unlocks)
(unless noted, DP difficulties are the same)

The game’s UI is not very reminiscent of the poster’s main visual. Instead, take a look at the following three images, with each one showing a different part of the theme:

The theme of the game now has a somewhat abstract design, less “wild” or outspoken compared to something themed like EMPRESS, SPADA, copula, or CANNON BALLERS.

In various parts of the interface, we can see some sort of futuristic library or perhaps server room. I’m hoping some kind of Akashic Records theme/feature/unlock events. (Almagest2 anyone?)

The title screen was a bit basic (even more than INFINITAS), so it might be a placeholder: 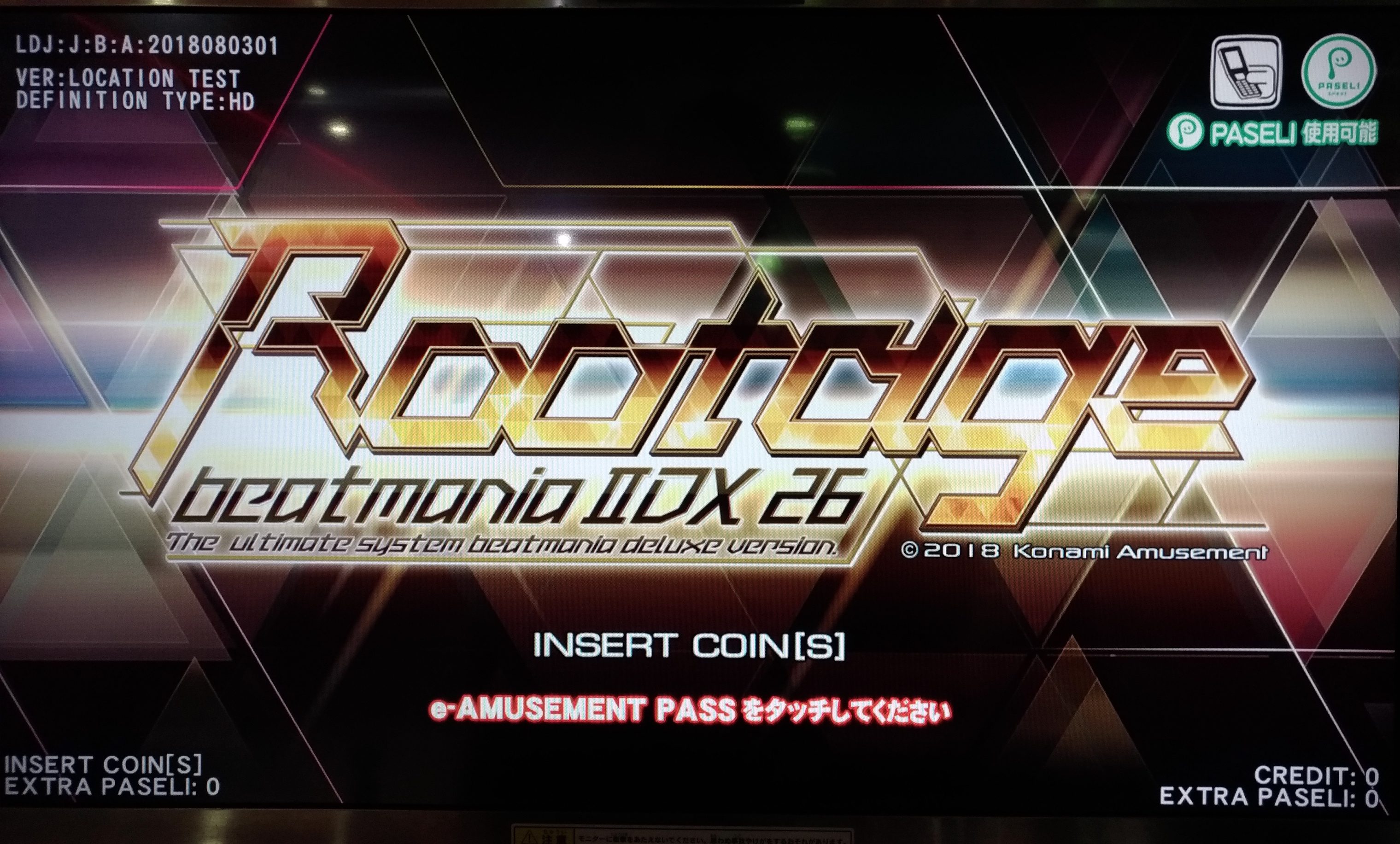 Getting right into the game, generally, not much has changed, so all IIDX players should feel right at home here:ww 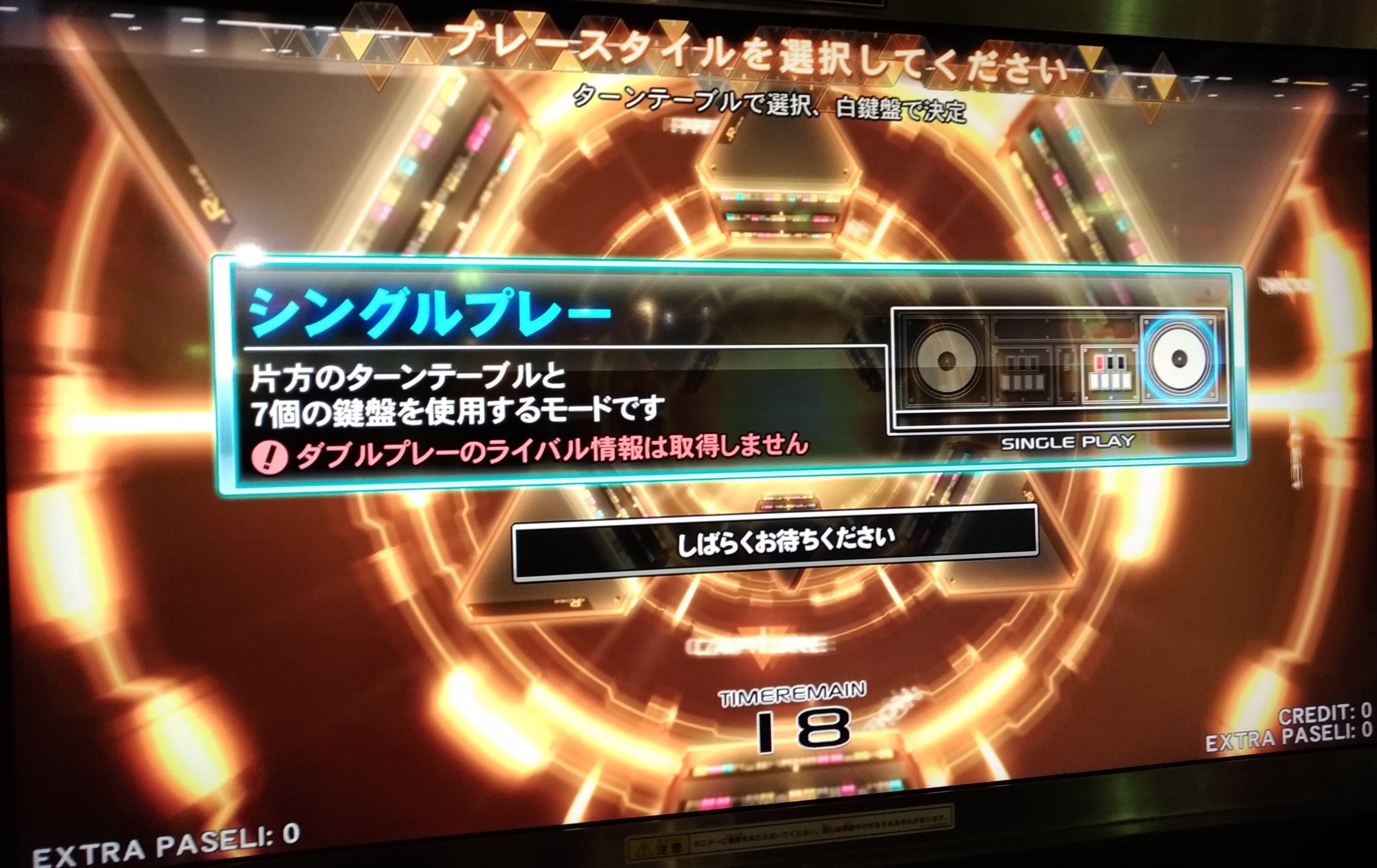 One small change on Mode Select, however. The price for each mode is only shown once selected. While this does un-clutter the UI a bit, I’d personally like to know how much each mode is before selecting it, especially for Premium Free: 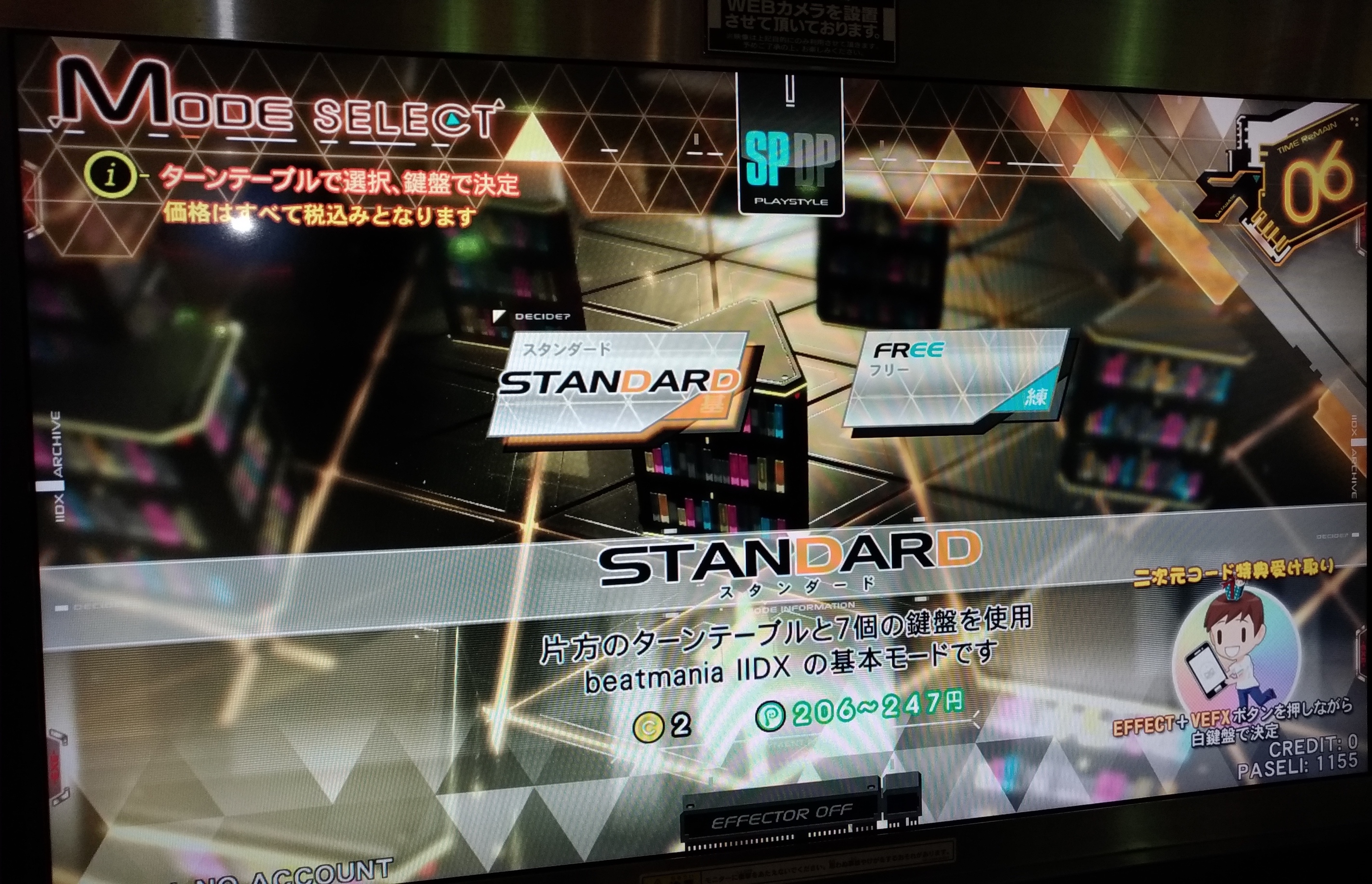 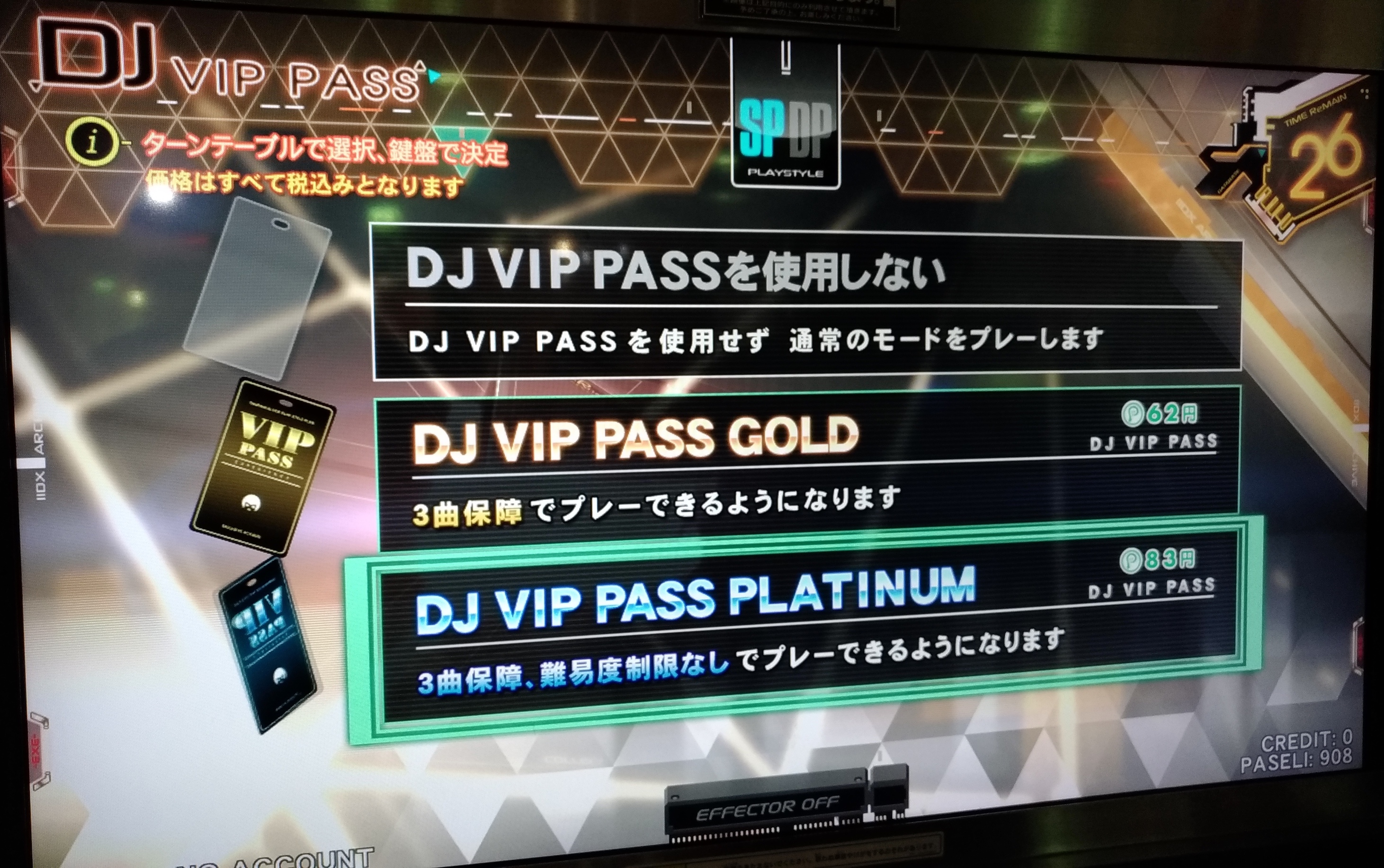 The transitions and effects are stylish and simple: 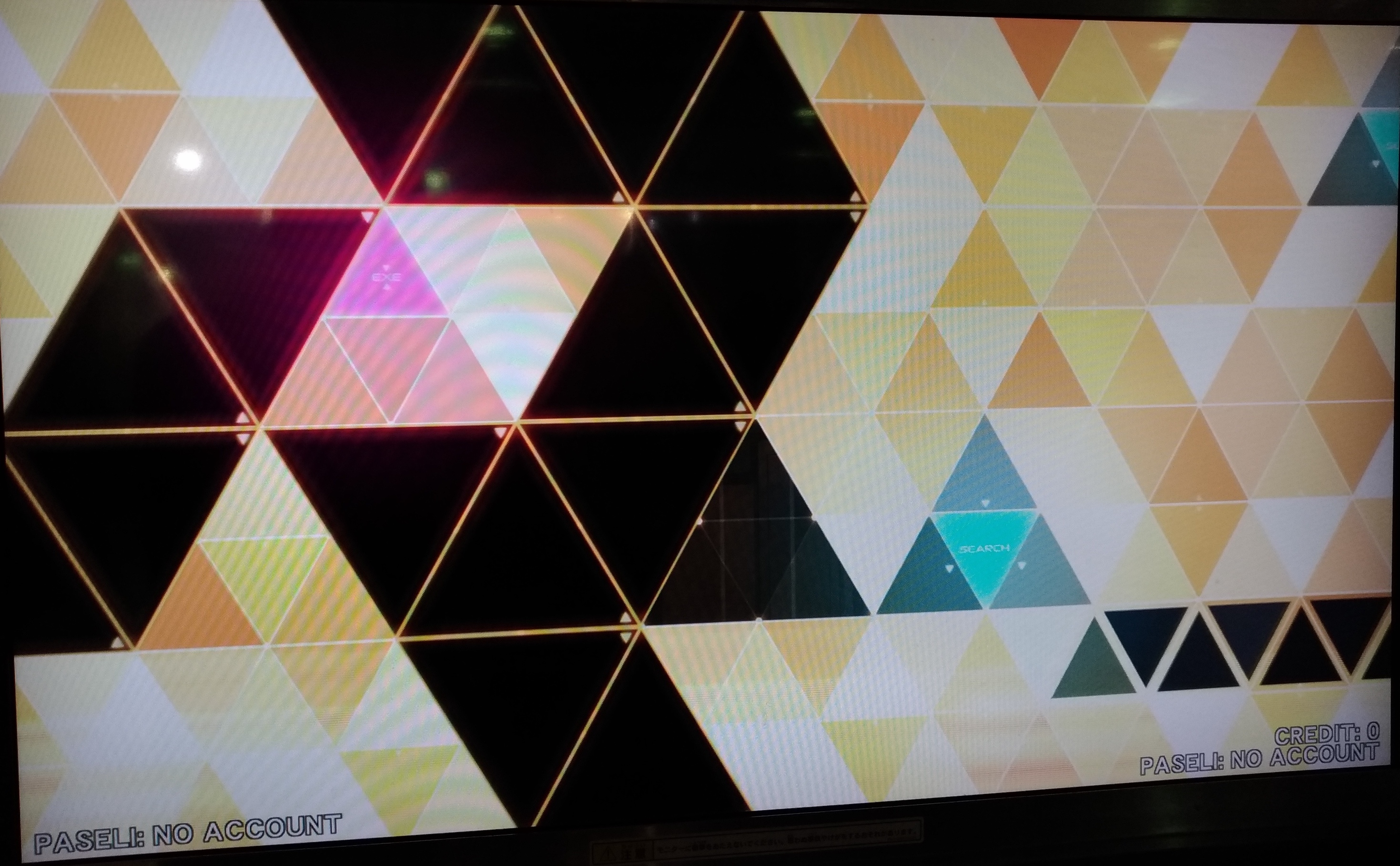 The Music Select screen is mostly the same, but now shows the In-store Best Score under where the Rival Data seems like it will go. Also, the Playlist function camera can be activated by pressing the ‘4’ key on the Numpad: 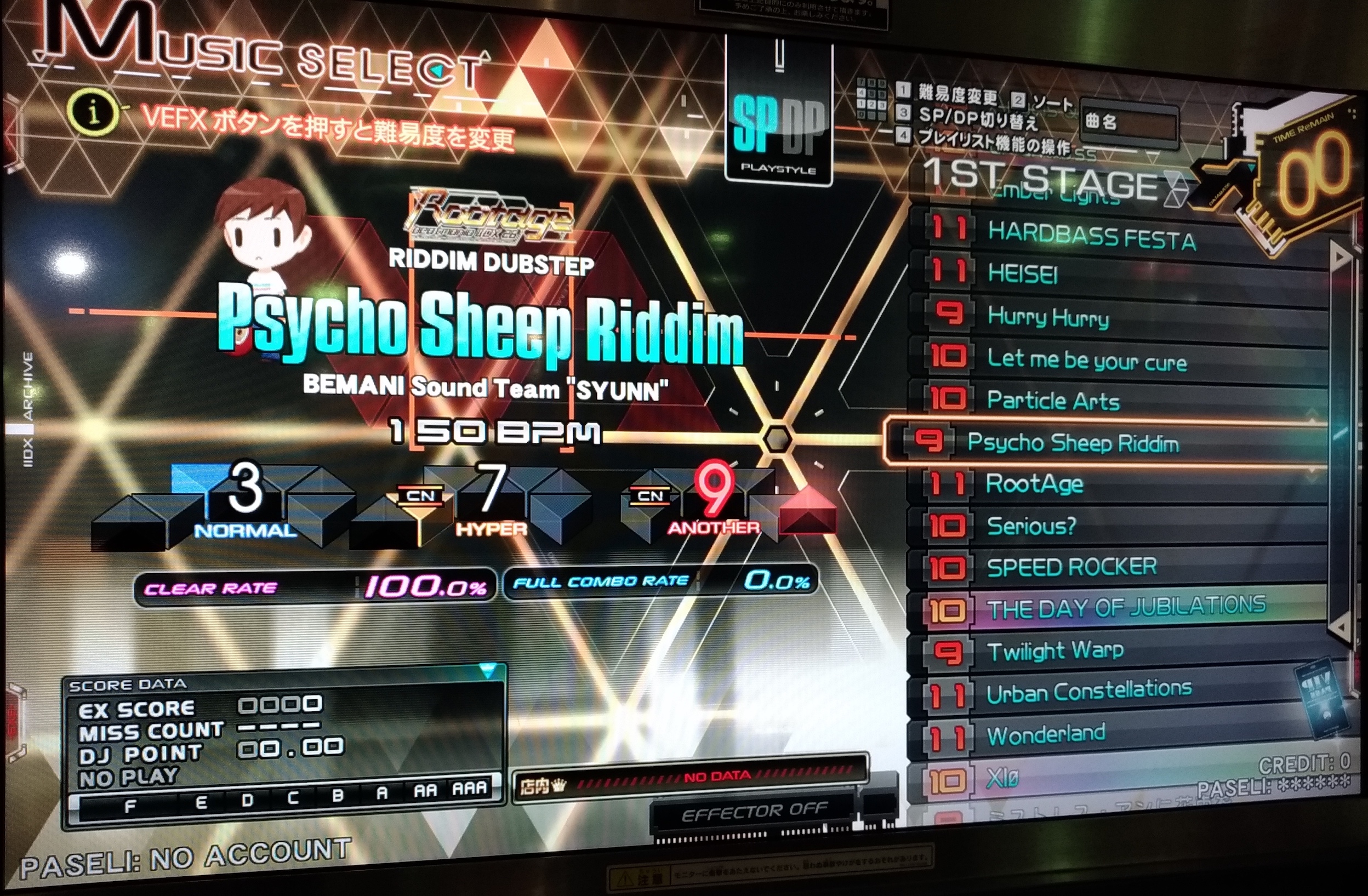 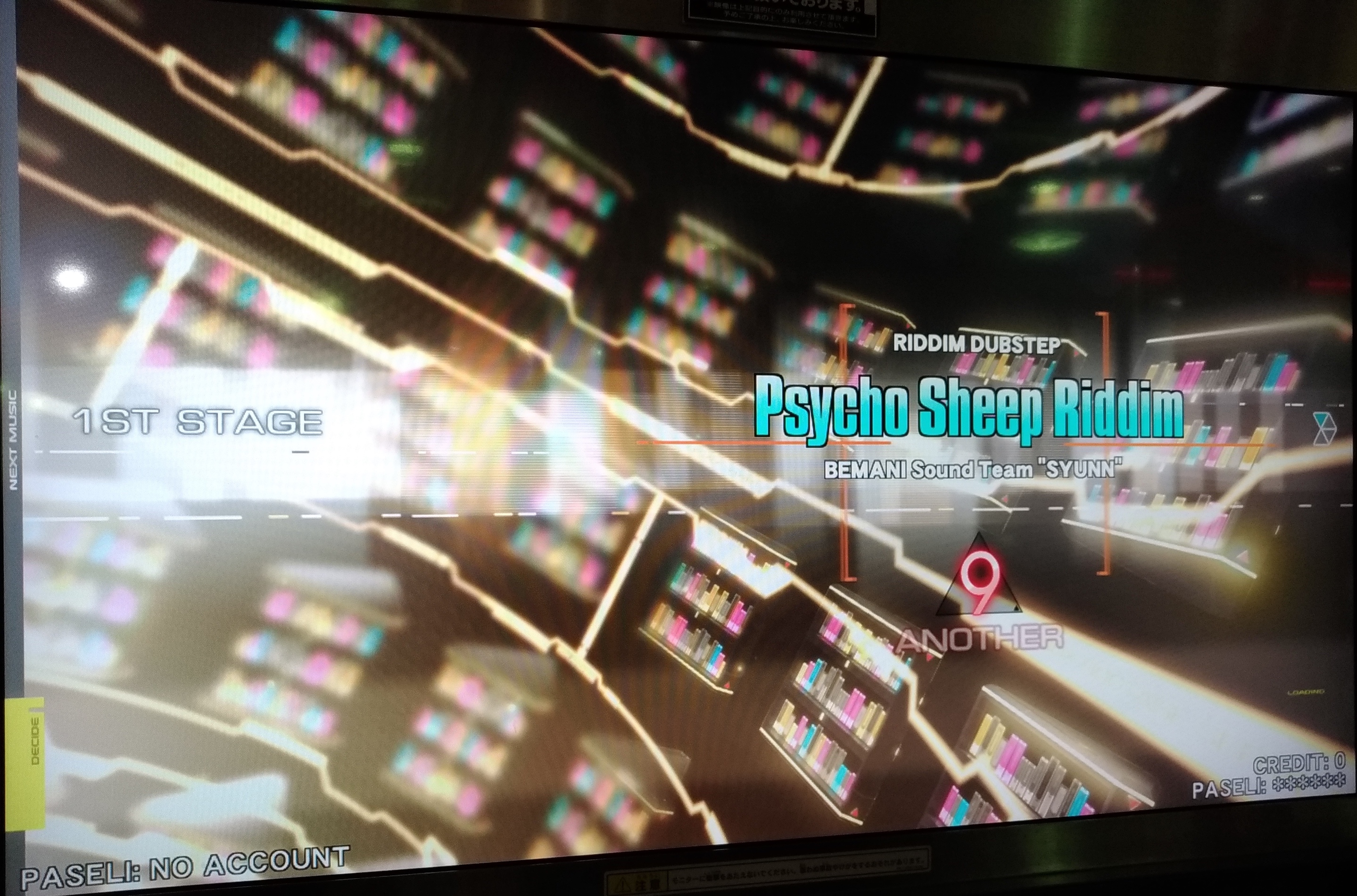 The Gameplay frame is already my favorite. Cool but relaxed, without too many colors jumping out at you. This definitely feels like a IIDX theme to me. Lots of tech-y aspects going on, like the LAN cables and other wires plugged into the keys: 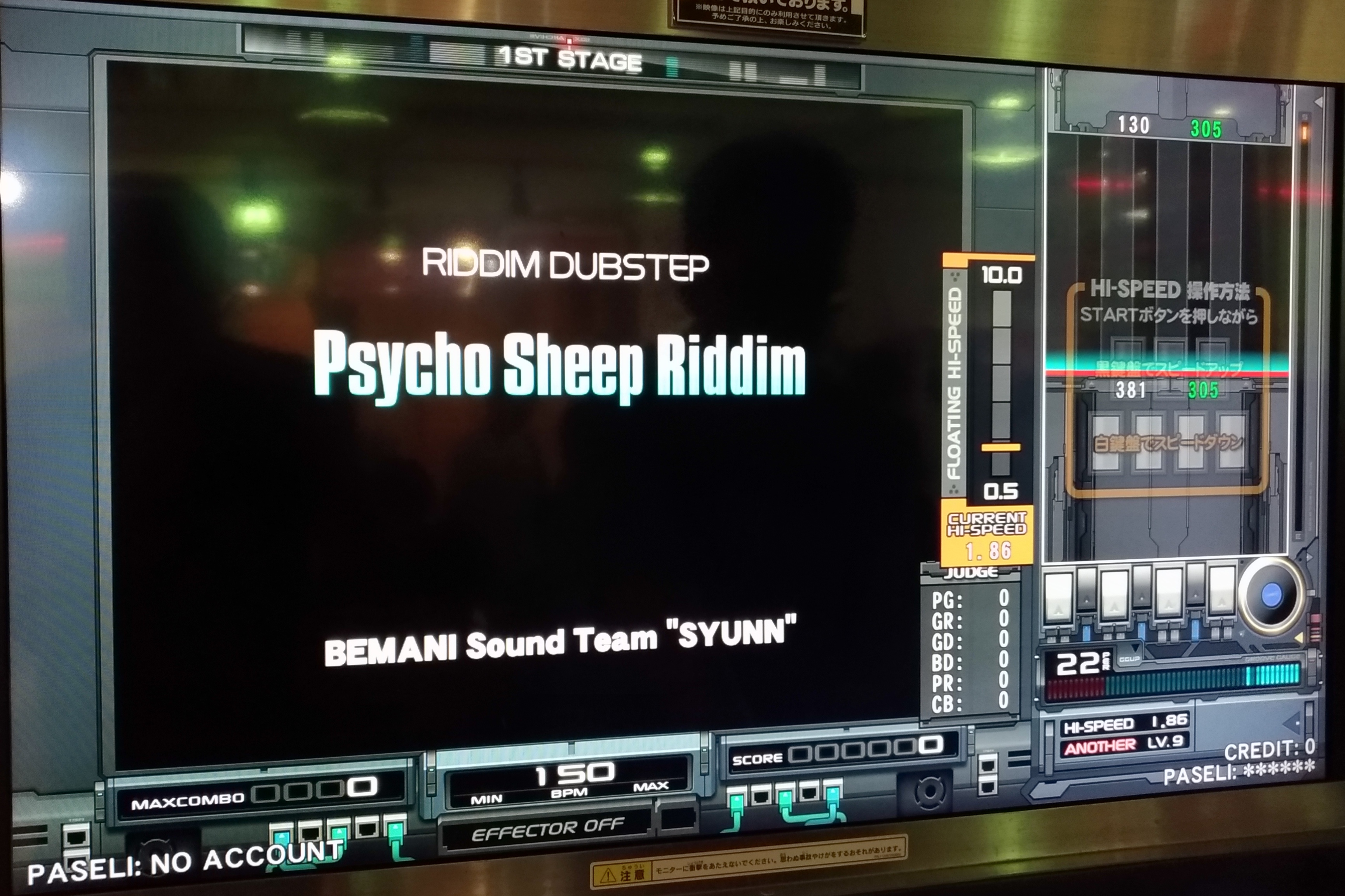 On the results screen, pressing the Numpad’s ‘5’ key will switch the display of the graph, as mentioned above: 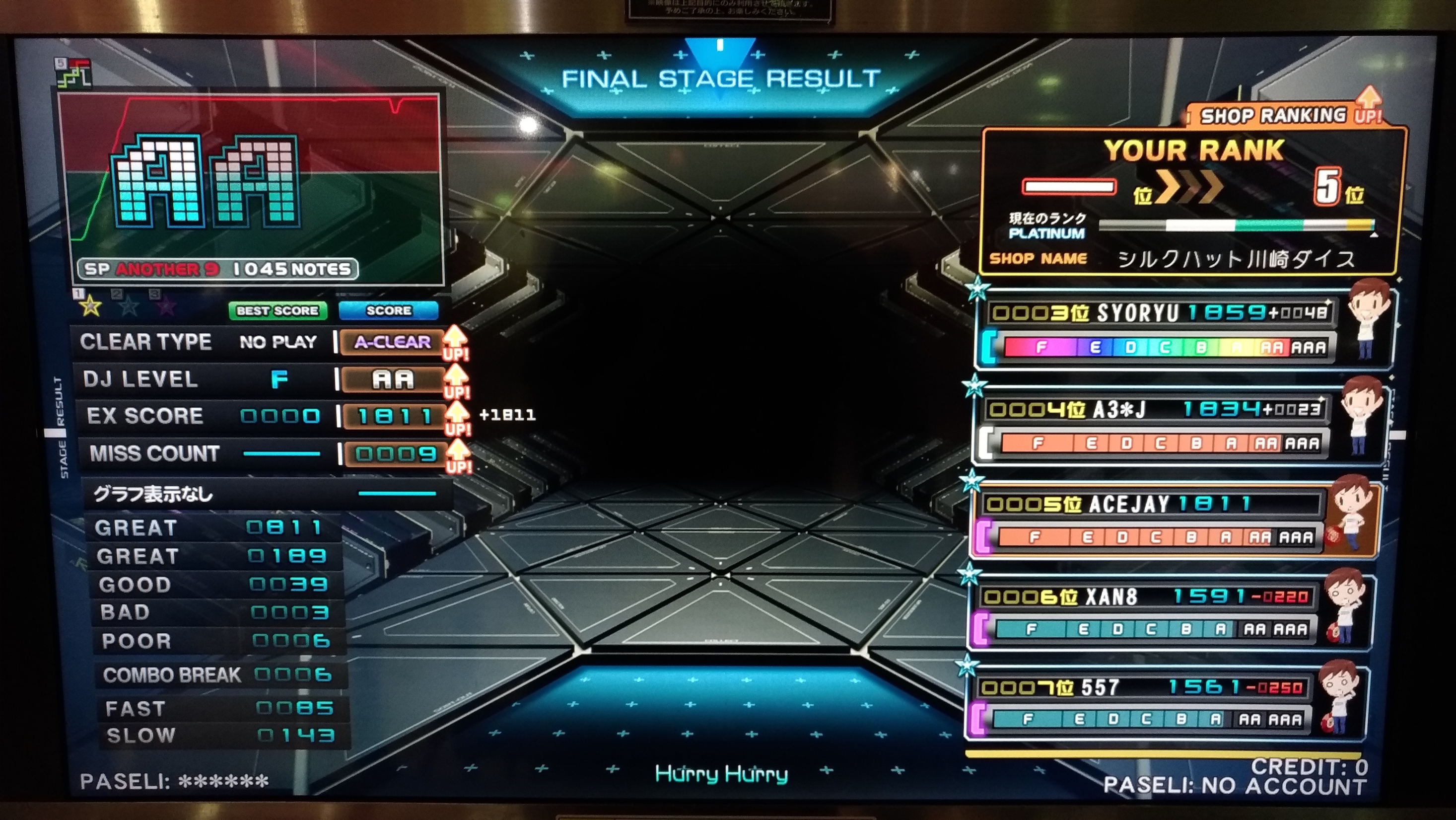 I think this might be really useful for new players, but if every key has the same grade (like it did on all my plays) it’s not very useful. Hopefully they can add some kind of indicator to show which keys had lower or higher scores/accuracy, comparatively: 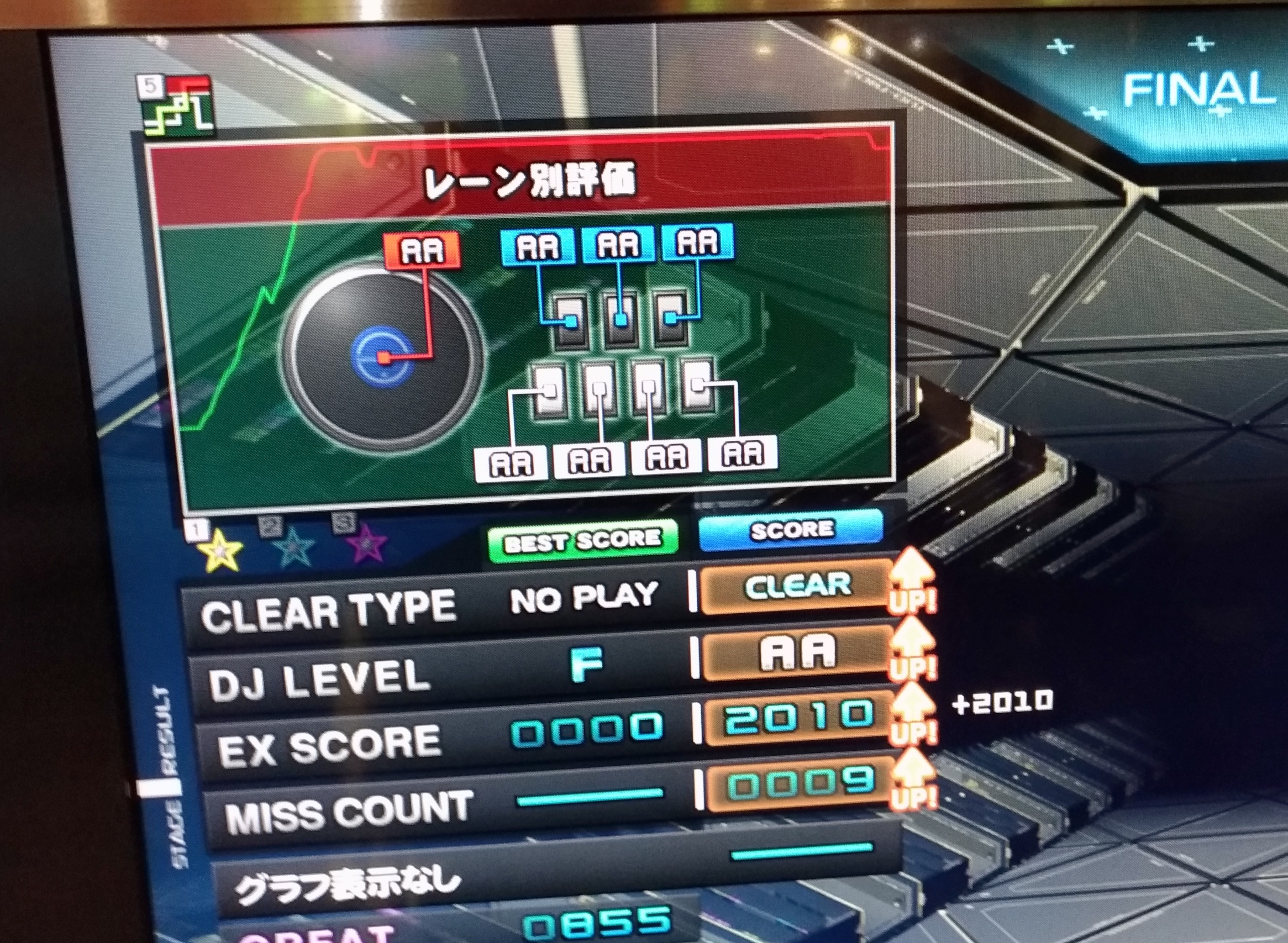 Not too much else left to say, although the Card Out/Game Complete screen does still show the Arena Mode sections. Hopefully this means that mode will not remain a CANNON BALLERS exclusive: 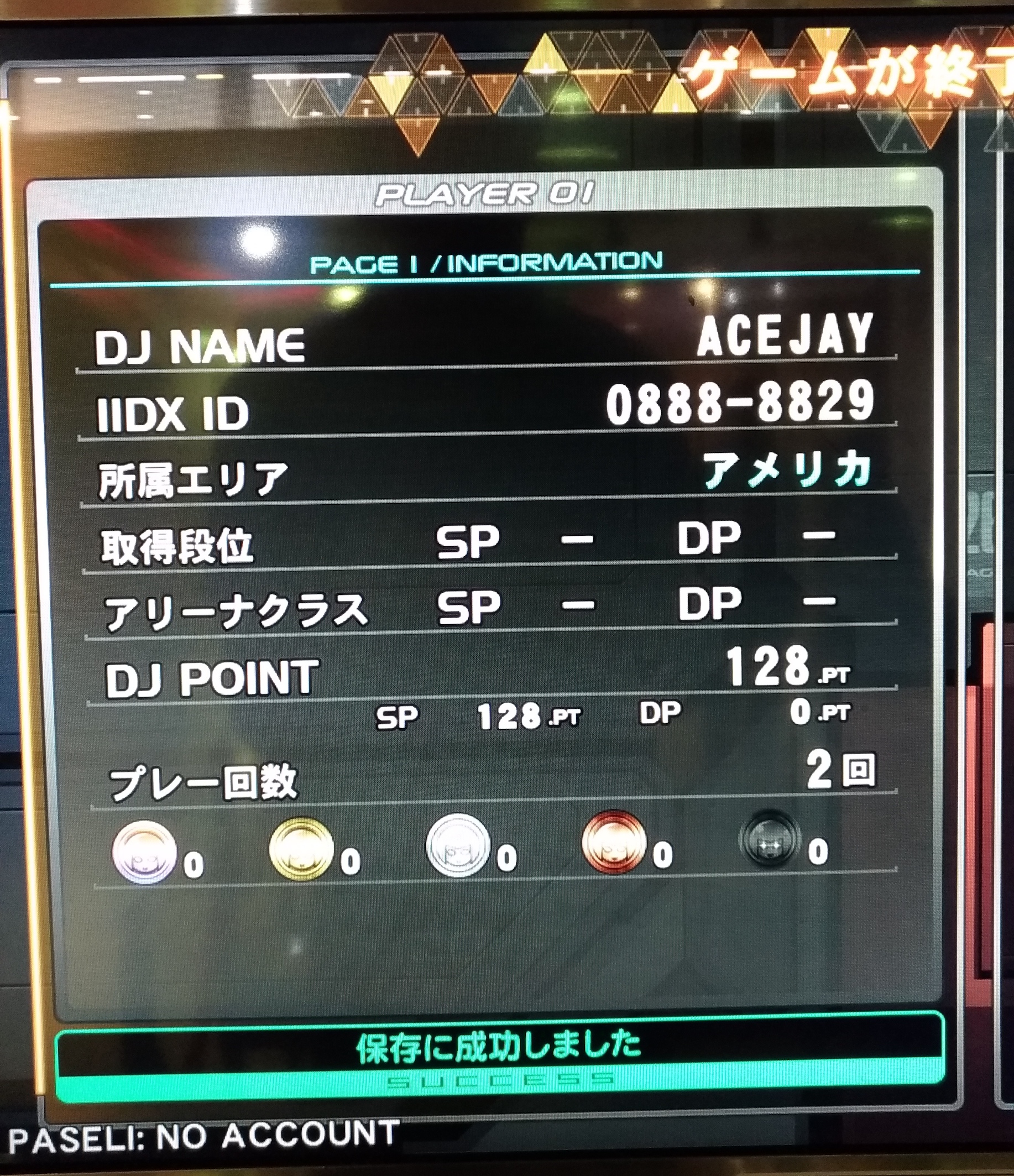 One final tidbit, pressing the Numpad ‘0’ key at the Game Over screen will show… 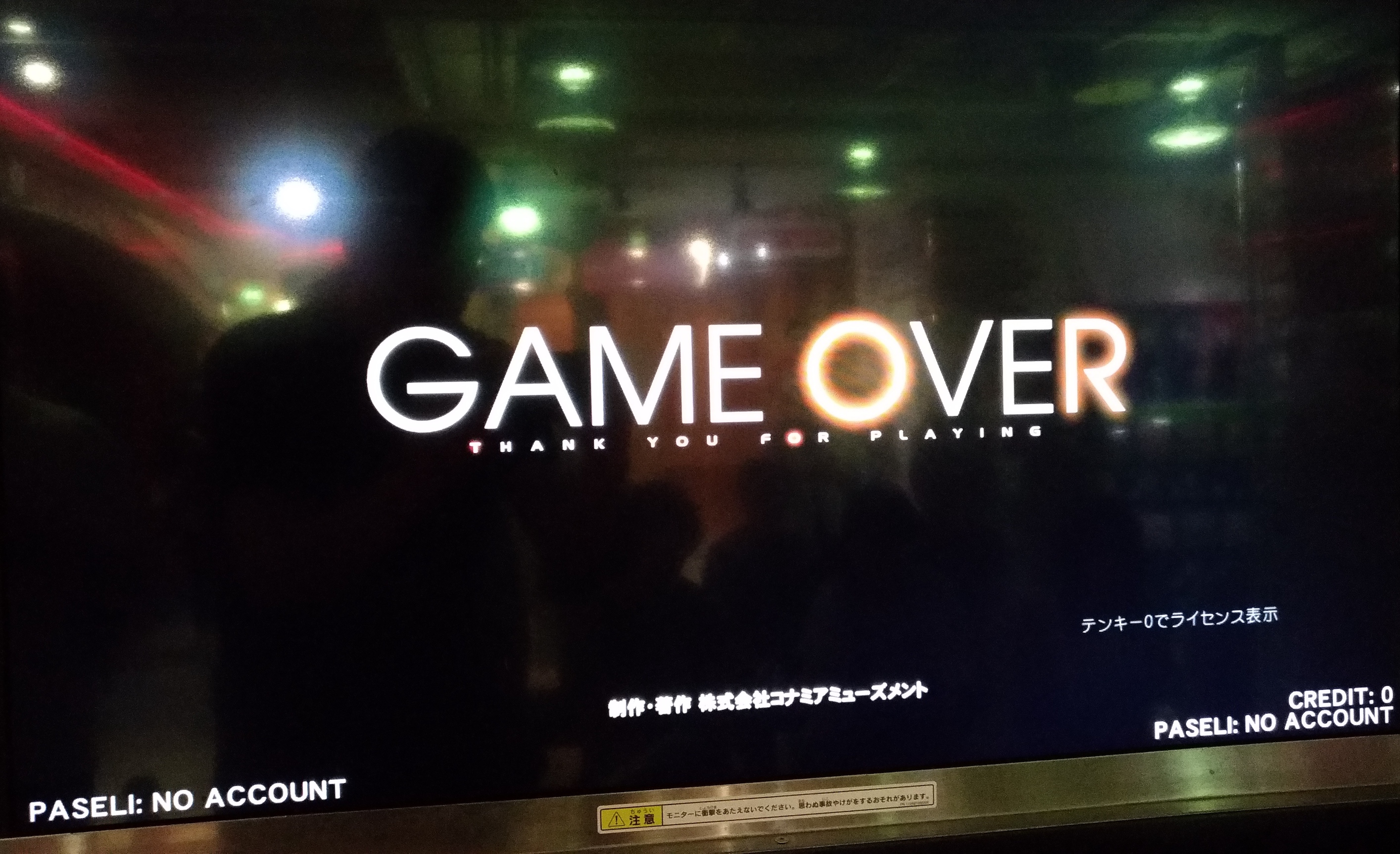 OF COURSE, the Apache Software License. Why? Who knows. Perhaps the new QR code reading software relies on some new code that requires this to be displayed. When this screen pops up, you get a whole 60 seconds to read it… 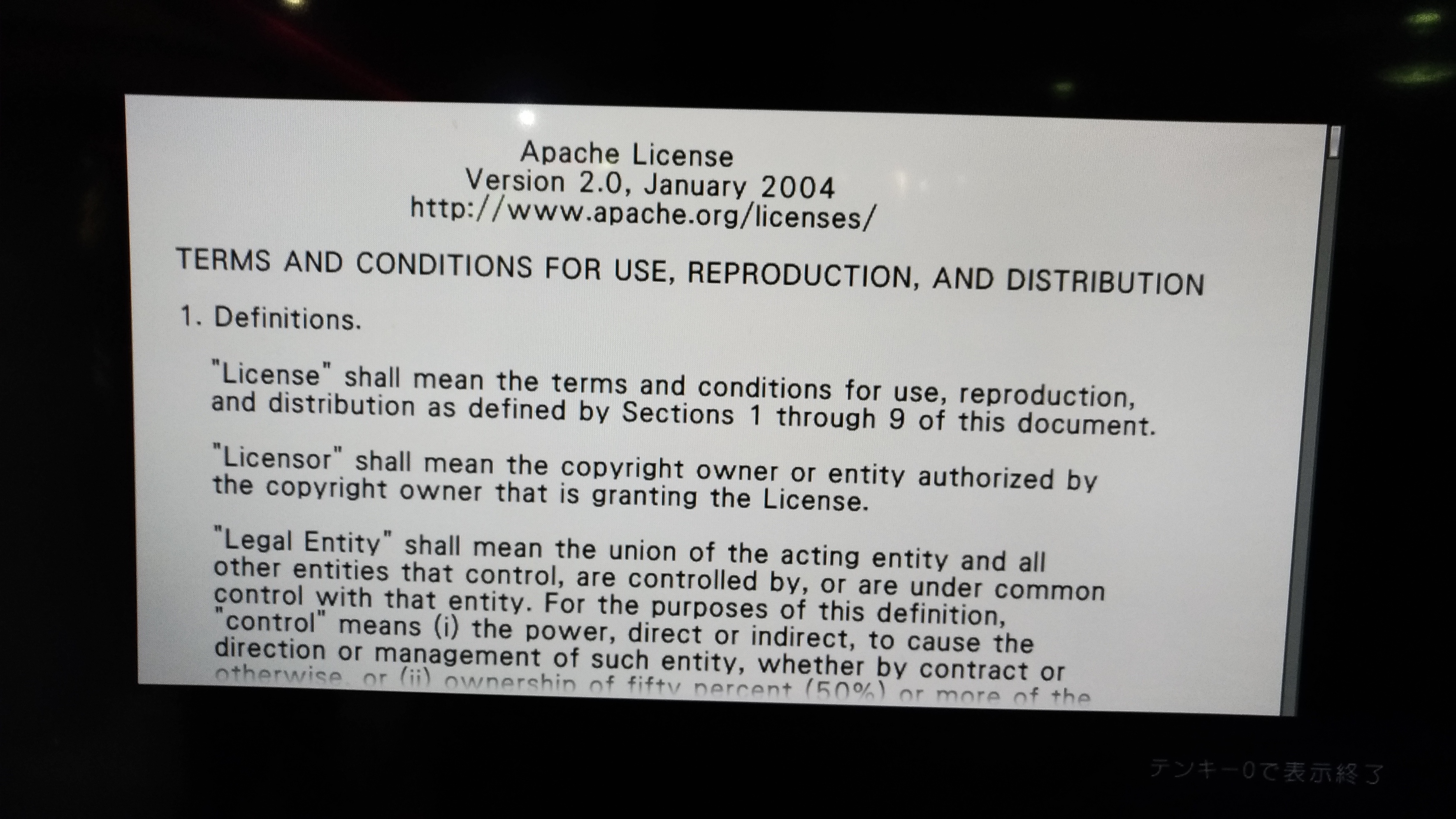 This is IIDX in its purest form. I hope this style continues for longer than CANNON BALLERS seems to be living. An interesting initial songlist and sleek interface are going to help this style out. Definitely feeling good about this release, and can’t wait for more.

THANK YOU FOR PLAYING.