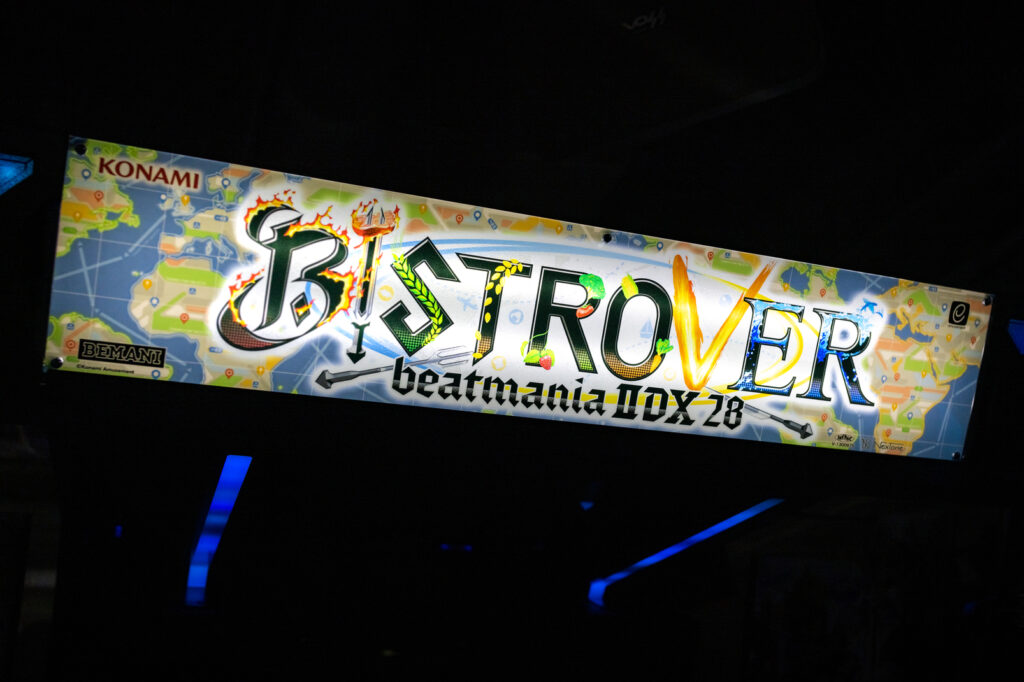 It’s that time of year again, where all boys and girls across the land gather at Silk Hat DICE in Kawasaki to partake in quite possibly the best thing that has happened all year, the location test for Konami’s newest version of beatmania IIDX – beatmania IIDX 28 BISTROVER. 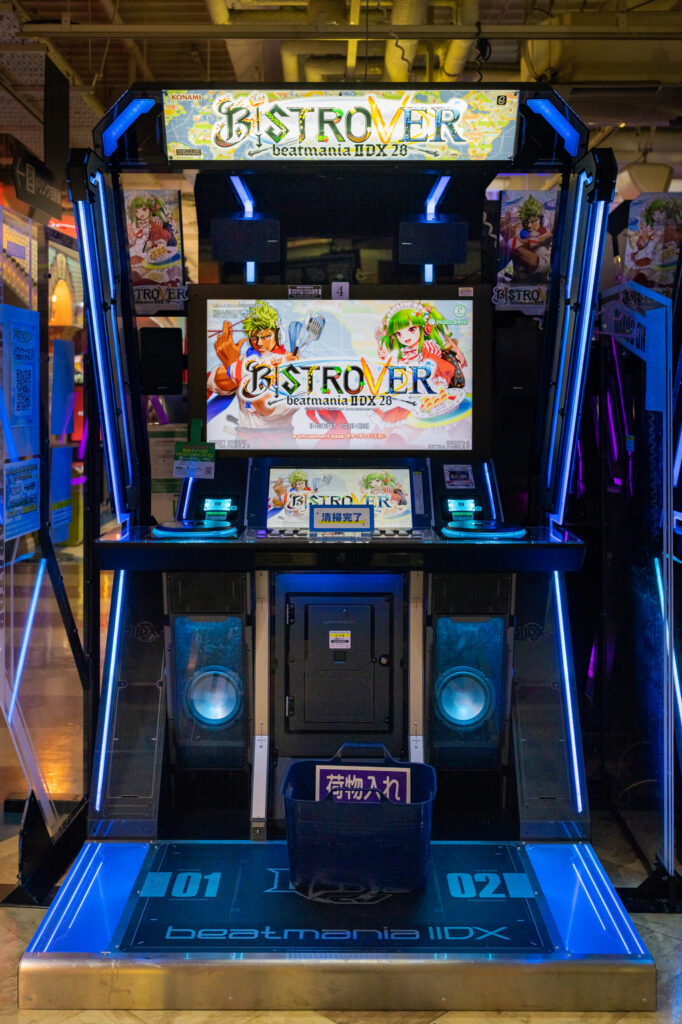 Hot on the heels of the current version of beatmania IIDX, beatmania IIDX 27 HEROIC VERSE, we’re treated to a new theme, new songs, and quite possibly the cleanest looking interface I’ve seen on a beatmania IIDX game since beatmania IIDX 20 tricoro. With the new version of the game being BISTRO themed, let’s take a look at the dishes we have in front of us:

If there is one thing that beatmania IIDX has always been known for, is it’s visual aesthetic. With BISTROVER, gone are the jagged and sharp edges that came with beatmania IIDX 27 HEROIC VERSE in favor of a very, very fluid, and rounded interface. Using colors such as white, blue, orange, and green in an interface that is very reminiscent of beatmania IIDX 19 Lincle. Now that’s not a bad thing because it’s honestly one of the best-looking interfaces I’ve ever seen on any version of beatmania IIDX. The transitions in the game going from menu to menu from results to song select are so buttery smooth on the 120hz monitor that is housed on the beatmania IIDX LIGHTNING MODEL cabinet. It’s almost like they were made for each other.

One thing that really stood out to me was the system music. Gone was the bass thumping heavy-hitting track that we’ve come to get used to with beatmania IIDX 27 HEROIC VERSE in trade for a more melodious track which to me sounded very reminiscent of Routing by Camellia in beatmania IIDX 23 copula. It’s really a great system song and I look forward to hearing it more once the game gets released.

With each version of beatmania IIDX that gets released there are a number of changes that get implemented into the game, so let’s take a look at those.

If you’ve played any version of beatmania IIDX in the last 8 years, the game itself remains fairly unchanged. You’re still hitting notes once they get to the timeline and making the music magically come together with your perfectly timed key presses. With beatmania IIDX 28 BISTROVER, a lot of the changes are behind the scenes on things such as your pacemaker graph, your results screen, and the additional functionality that has been added with the sub-monitor on the Lighting Model cabinets.

If there’s one thing that I couldn’t live without on beatmania IIDX anymore is the pacemaker graph. It’s a simple way to be able to glance over and see how you’re progressing on a song when you’re trying to get that AAA ranking. Konami has added functionality to the pacemaker graph over the years since it’s introduction in beatmania IIDX 11 IIDXRED. In BISTROVER, that functionality has been expanded exponentially by introducing something called the “Rotating Graph.” What is the Rotating Graph, you ask? Let me tell you.

By turning on the Rotating Graph, your graph will display 2 smaller graphs, one which is set at level A, and another set at level AA, once the level A threshold has been surpassed, it disappears and the AA graph shifts over and a new graph for level AAA appears. Once the AA level has been surpassed, it disappears and the AAA graph is the only one that remains. At the location test, the rotating graph could be used for the A-AAA rankings as well as in-store rankings so you can have your graph constantly rotating as you beat players’ scores in your location.

The results screen has received its biggest overhaul it’s seen since the one displayed in beatmania IIDX 20 tricoro. Information such as your record, EX score, and all of the essential information needed to take your scores to the next level are presented front and center. 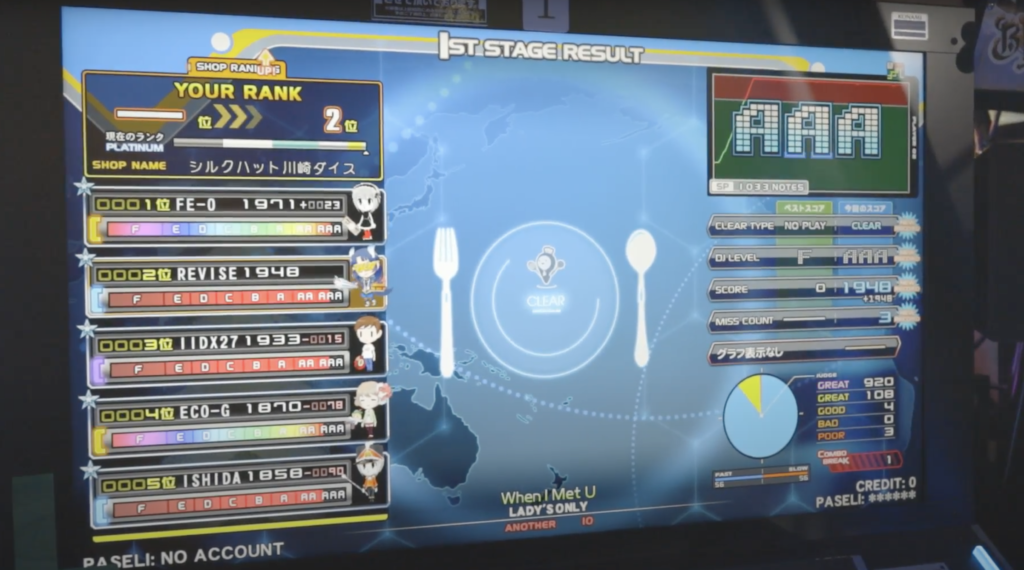 Under this, we have our breakdown of judgment and a new pie graph which shows your percentage breakdown of judgment for the song that you just completed. Under this, we have a new “Combo Break” section which was originally in the results screen but now has been moved under the judgment area. Next to this, we have our Slow/Fast results which are displayed in an easy to read bar graph. It really seems like Konami is encouraging players to get better at timing with this version.

The sub-monitor which was introduced in beatmania IIDX 27 HEROIC VERSE as part of the expanded functionality on the LIGHTNING MODEL cabinets has received a major update as well as after you complete a song, you can see a complete detailed breakdown of how you played the song. All the way to being able to slide your finger on the song progress meter to see what your gauge percentage was at any given point in the song. Furthermore, you have the ability to see a breakdown of slow/fast judgment in a very granular way as well as being able to see how you fared on each key from E ranking all the way to AAA. 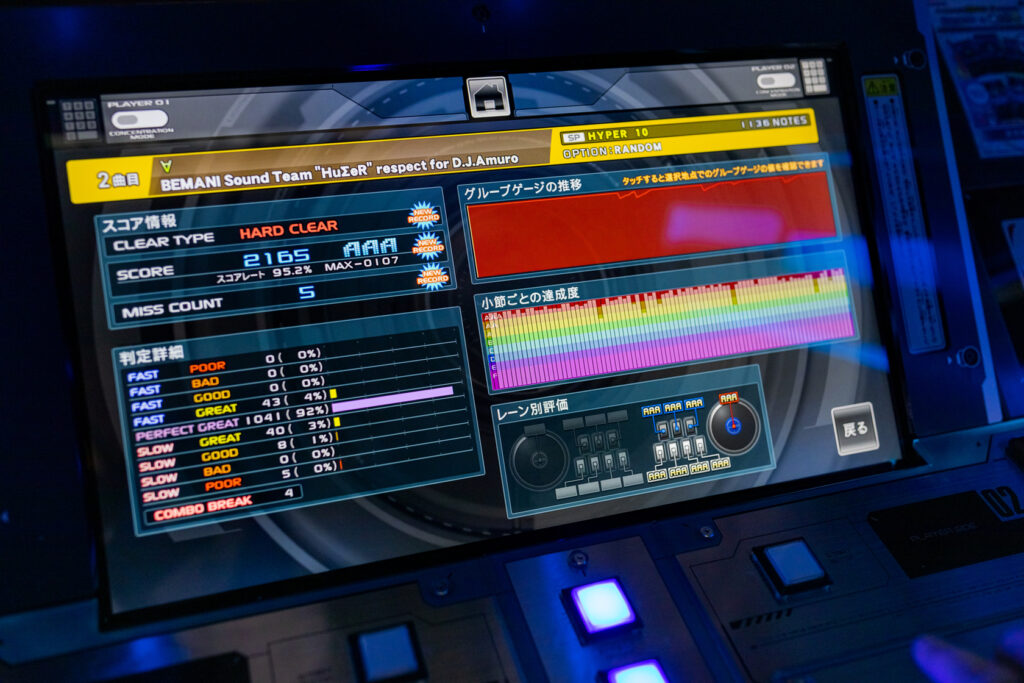 The meat and potatoes of any beatmania IIDX. The songs. I can honestly say that out of the 2 games that I was able to play of beatmania IIDX 28 BISTROVER, none of the 6 songs that I played left me wondering why that song was included in the game.

Each song felt like it had it’s own identity and really fit the game. Some of the take away tracks that I played and heard from other people playing were When I Met U by LADY’S ONLY, a new artist to the beatmania IIDX series, and an artist who also performed for OTAQUEST CONNECT. Based on what they gave us this time, I hope we see more of them.

One song which really stood out to me was ‘∀’ by BEMANI Sound Team “HuΣeR” respect for D.J.Amuro. The track is a heavy-hitting track which has been come to be normal for HuΣeR, but the song progresses through DJ Amuro’s tracklist in a very well put together remix/tribute track.

Another song that caught my attention was POLꓘAMAИIA by Camellia feat. Nanahira. The genre is Polka2020 and the song is such a rollercoaster ride. Shifting from traditionally Russian/Czech sounding music to the heavy bass dub/drum step sound that we’ve come to know and love from Camellia. It’s really a great song.

All in all, I feel that beatmania IIDX 28 BISTROVER is going to be one of the best IIDX versions that we have come to see in a long time. There is already a huge diversity in the type of new songs that are playable and I feel that Konami will just continue to expand on this.

Beatmania IIDX 28 BISTROVER still has no announced release date, but I’m sure we’ll see it sooner rather than later. So get ready to start folding up your capes because it’s time to come home and cook dinner.