It’s long been a yearly tradition for games in Konami’s beatmania IIDX series to receive a significant update with new songs, new features, and a new theme. Try as it might, 2020 did not get in the way of that happening again this year with the location test for the next edition of the game, beatmania IIDX 28 BISTROVER, occurring starting today in Kawasaki Japan. Taking place at Kawasaki Silk Hat DICE, the same venue as the past few years, this new test drew a massive crowd early with lottery tickets to get a chance to try the game out being snapped up more than an hour and a half before the event was even starting. While we haven’t had the chance to really spend some time with the game just yet (we’ll get our chance a little later this weekend) there’s plenty of new info about the title to share, so let’s not waste any time.

What would a new IIDX game be without new music? Of course, many of the series favorites are present with new tracks but there are always some surprises whenever a new game is revealed. The inclusion of a remix of the “IIDX RED Ending Theme” and fan-favorite track “A” are both standouts. And I would be remiss if I didn’t mention the inclusion of LADY’S ONLY, who recently performed as a part of OTAQUEST CONNECT, making their debut in the series as well!

*These songs are available to preview in beatmania IIDX ULTIMATE MOBILE on iOS and Android until September 22nd.

Let’s talk about the updates to the lightning cabinets since that’s what the test is occurring on, and in this case it all takes place on the touch screen. Giving the touch screen a fair amount of additional utility in this new game is a “play analyzer” feature, which gives players more detailed information about the songs they’ve played. As you highlight a song you’ll be presented with a detailed breakdown of your score record, along with a sliding graph that shows your percentage throughout the length of the song and allow you to tap the touch screen and pinpoint specific parts of the song. This should give players who are looking to improve at specific songs a better idea of where they can focus.

The play & results screens have gotten a bit of a facelift. 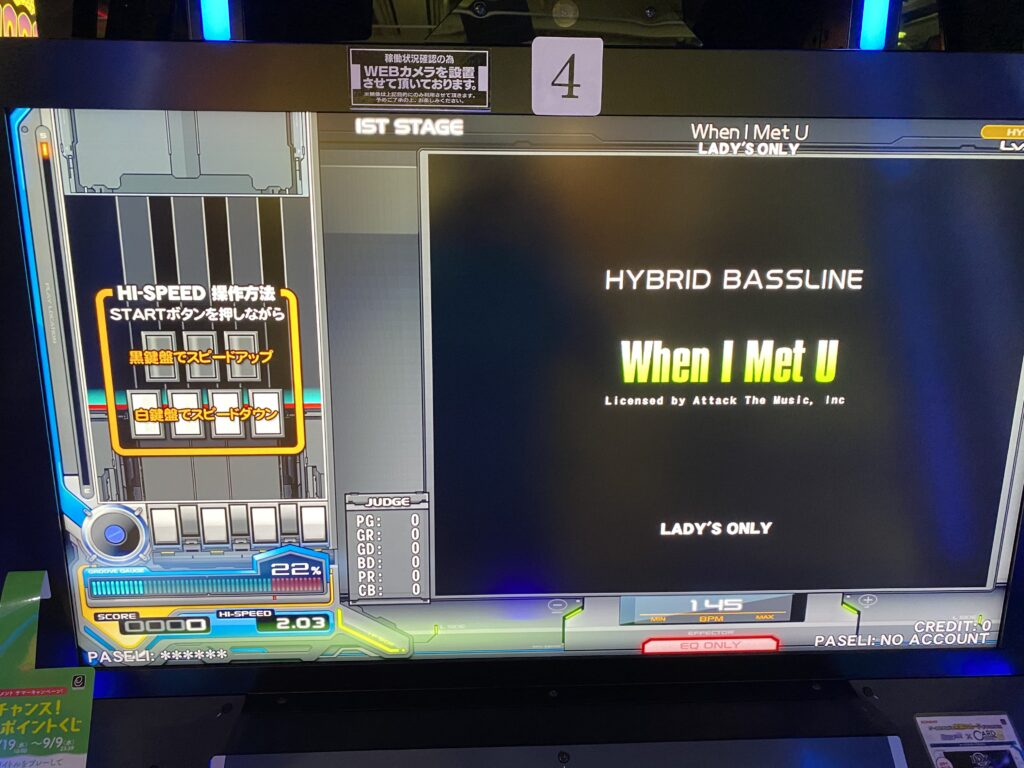 The gameplay screen nows shows the song information in a slightly easier to see location, above the frame for the song’s video just underneath what stage you’re on. In addition to that, the “money score” at the bottom of the playfield has been replaced with the EX score as the standard method of scoring. The latter is something that would make sense considering the changes to the results screen.

On the results screen, the layout has been switched up to make it easier to read everything at a glance with your clear type, DJ level, EX Score, and miss count getting a more prominent placement & arrangement. Your timing breakdown also still appears, this time at the bottom of the screen, with a pie-chart that breaks down each scoring judgment and a fast/slow meter that makes it much easier to see where your weaknesses lie.

From the promotional art and general look of things, the theme of the game is clearly food-related. The title screen features the characters Tsugaru in a maid/waitress outfit and Duel in chef’s garb. Taking a look at the poster expands the roster to include Shiki & K-Na looking like they’re ready for a cooking battle, and Xia in a similar outfit to Tsugaru. Ther’s map imagery throughout the interface and featured on the marquee. It would only make sense for the end result to be a combination of those themes, but of course, we won’t know until the title is fully released.

There’s not a ton to really say about the interface at its core since they haven’t made any massively drastic changes to the general look and feel of the game for a while, but that doesn’t mean it’s all the same. BISTROVER has a very clean and colorful look to its interface, making excellent use of primary colors and white space resulting in a very refreshing look. The gameplay screen is largely the same minus the aforementioned scoring change, but the use of color for the frame stands out nicely and gives just a hint of the flavor that ties it back to the rest of the game. The difficulties on the song select screen are laid out on what almost looks like plates/platters when selected, making your chosen difficulty stand out in a way that keeps with the theme of the game. All in all, it’s very clean and not too busy which allows each of the elements to really shine and create a complete visual package that is sure to please.

Of course some of these things could definitely change when the game is actually released (which we hope will be sooner rather than later), and it’s surely only the tip of the iceberg in regards to what the finished product will include. It’s still exciting to get an early look at the games in this manner, and beatmania IIDX has definitely long been the master of using these sneak peeks to its advantage and drum up excitement for the final release.