This is a really unique move for Konami to do, as in previous years, they have been extremely touchy about using content from location tests in currently available products. To add content into Beatmania IIDX Ultimate Mobile from Beatmania IIDX 28 BISTROVER and Sound Voltex EXCEED GEAR is a realy thrilling move. Normally in order to experience anything from the location test, you had to be present at the location test and keep everything you saw there fresh in your memory until the game’s release in game centers at a later date. 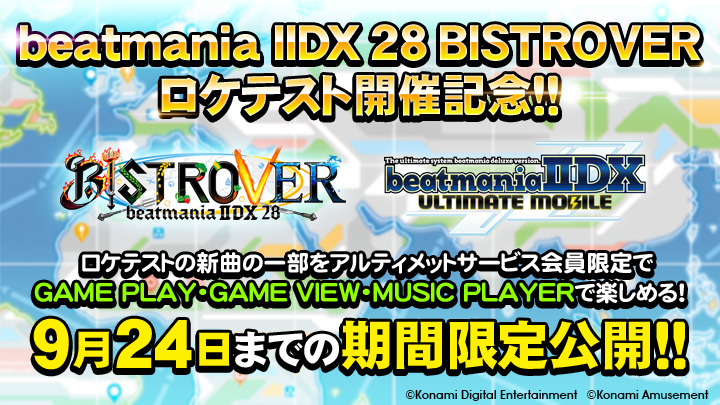 They made the announcement via Twitter and a special landing page for the event and stated that three songs from the Beatmania IIDX 28 BISTROVER location test will be available in the Game Play mode, Music Player Mode, and Game View mode for current subscribers of beatmania IIDX Ultimate Mobile until the 24th of September. The songs from Sound Voltex EXCEED GEAR will be available to listen in the Music Player functionality until the same date. Sound Voltex EXCEED GEAR will be getting a total of 16 tracks for your listening pleasure in the Music Player under the 「その他」(Other) category.

The location test for both beatmania IIDX 28 BISTROVER and Sound Voltex EXCEED GEAR kick off tomorrow at Silk Hat DICE in Kawasaki, Tokyo, Japan, and we will be on the scene giving in-depth coverage of the location test, so you can make sure you look forward to that.