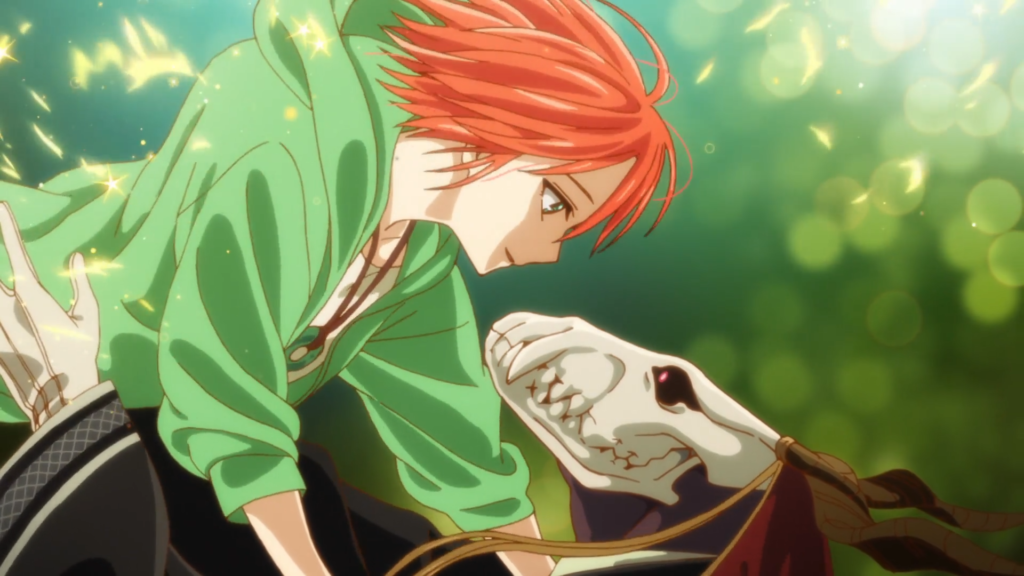 Kore Yamazaki’s The Ancient Magus’ Bride (Mahou Tsukai no Yome) is one of the best fantasy series to come out in the past few years. The series’ dark fantastical storyline drama with thrilling aspects introduces us to a natural world much bigger than anyone can expect. WIT Studio gave the series an equally exceptional 2017 anime adaptation with superb animation qualities and a masterful musical score to boot.

With a new OAD of the series coming soon from newly formed Studio Kafka, fans can expect to see more of Chise and Elias. For now, I think it’s important we explore some of the folklore that’s associated with the series. In particular, The Ancient Magus’ Bride has a fascination with fairies and their variants, as well as other western fantastical creatures. What makes this anime refreshing is its exploration of western fantasy as opposed to Eastern spirits like yokai.

The Ancient Magus’ Bride features some prominent folkloric creatures throughout the series, and I’ve taken the time to write down some of the creatures’ facts and how they relate to the story. 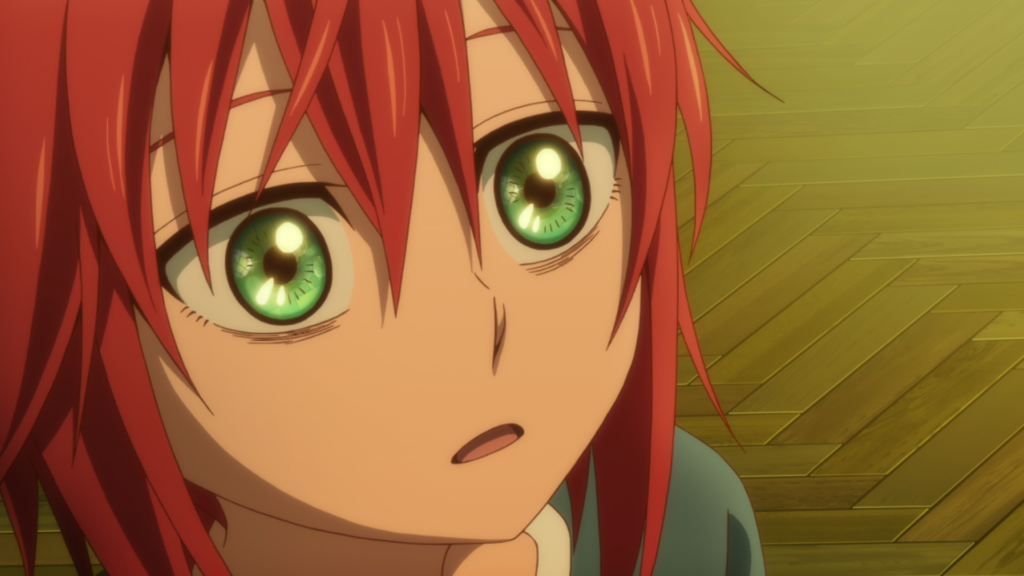 In the manga and anime, Chise is recognized as a rare human called the Sleigh Beggy. She can generate and store large amounts of magical energy in exchange for a shortened lifespan. Because of this, she unconsciously draws different types of magical creatures around her, and this power has unfortunately led to her being an orphan before being sold as a slave. Nevertheless, Chise is viewed highly by both sorcerers and fae alike.

The name, Sleigh Beggy, is rooted in Manx Gaelic language from Celtic culture. It roughly translates to ‘little people’ and describes a tiny fairy originating from the Isle of Man. Little is known about this type of fairy, but I suspect Yamazaki created her own lore surrounding Chise’s mysterious Sleigh Beggy abilities. 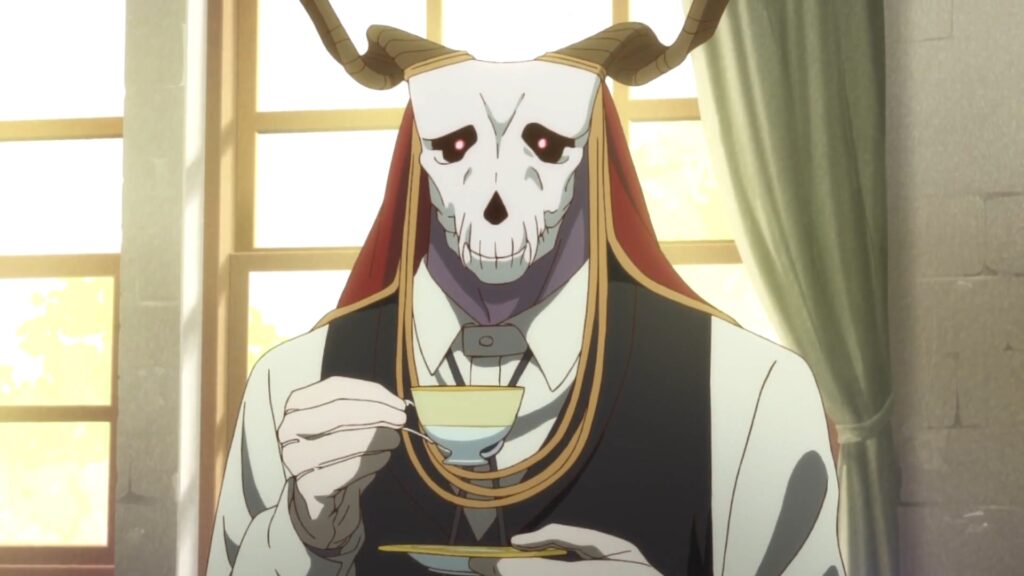 Elias is considered a fae (or fairy), a prominent group of magical creatures in The Ancient Magus’ Bride. They adopt different forms and sizes with magical powers. Elias, in particular, has features of both fae and humans, considering his size and body stature are close to that of a human. Yamazaki has been vague on his origins and what type of being he is.

Fae possess an inordinate amount of supernatural powers that demonstrate a force of malice. They can align with any element such as light or dark or other factors surrounding the changing seasons or environment. Historically, fae are viewed as natural beings hidden from plain sight, as well as spirits of the dead or descendants of fallen angels and demons. Like Elias, their origins are unknown, but many cultures (especially in Paganistic tradition) have their own folk beliefs.

A recurring theme with the fae and Elias is death and malice. They’ve traditionally been beings that are warded off by specific charms and practices because they often trick or befall disaster upon humans. Elias himself remembers killing humans in his past, but his personality changes after he reincarnates. While generally calm and polite, he can be menacing when Chise is endangered. 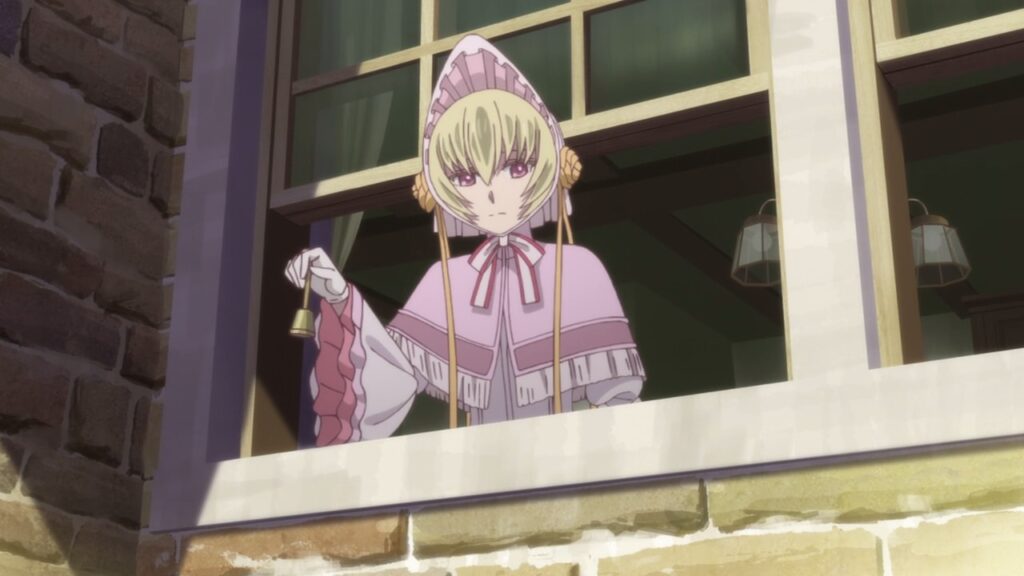 Silver Lady was once a Banshee, a type of female spirit based in Irish folklore who wails and shrieks in the moment of a family member’s death. Having been the last of her clan, she was discovered by Spriggan and brought to Elias’s home.

Afterwards, she is transformed into a Silky and barely speaks as much anymore. When she’s first introduced, we see her as a caretaker of Elias’s home who slowly grows attached to Chise.

Silky are a variant of the Brownie spirit, who cook, clean, and take care of the domestic duties of the home while humans are away. They’re fiercely defensive and will play tricks on you when they’re feeling mischievous. If they feel offended or taken advantage of, they won’t hesitate to abandon the home and run away.

That doesn’t seem to be the case for Silver Lady, who is very much devoted to her role and respects Elias and Chise. 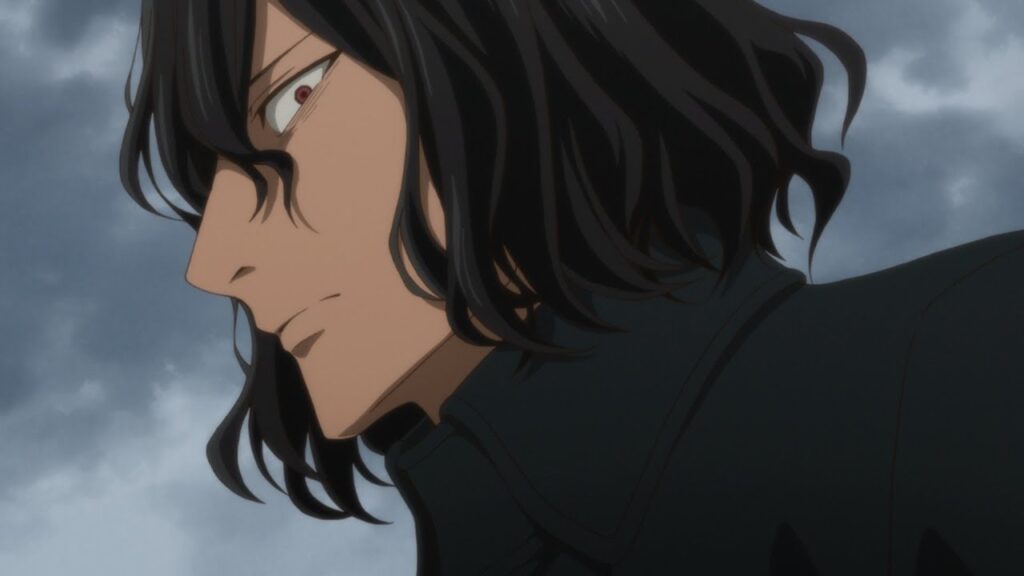 Ruth is Chise’s familiar who has two forms: the first being a dark-haired man with slanted eyes and the other being a large black dog with red eyes. He’s known as a guardian spirit called a Church Grim, a protector of the church’s graveyard from those who sacrilege it. Based on English and Scandinavian folklore, the Church Grim prowls around the graveyard at midnight and helps clergymen determine if the deceased is bound for Heaven or Hell.

Ruth’s story within The Ancient Magus’ Bride involves him meeting Chise as his former self, Ulysse, a name given to him by his previous owner, Isabel. She died in an accident long ago, and Ruth has been watching over her grave ever since. Noting the similarities between her and Chise, Ruth agrees to be Chise’s familiar and moves on from Isabel, letting her pass on peacefully. As a result, their lifespan is now shared and Chise can call upon him whenever she needs to.

Titania & Oberon — Queen and King of the Fairies

If you’ve read and studied William Shakespeare’s A Midsummer Night’s Dream in English class, then these names will sound familiar. Titania and Oberon are rulers of all the fae. When Chise meets them for the first time, she realizes that they hold more power than they show. So much so that even Elias respects their position of authority. 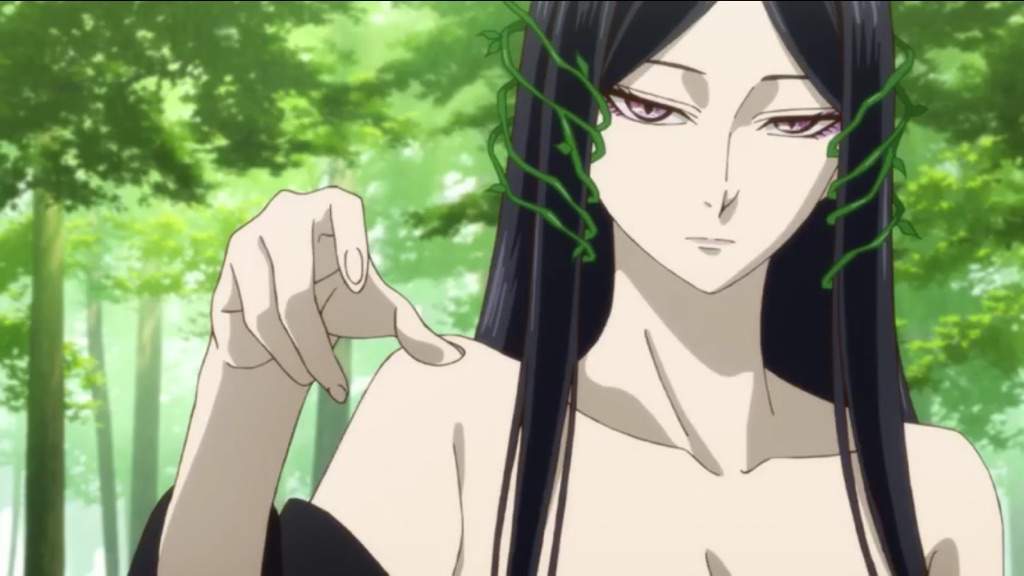 Like her Shakespearian counterpart, Titania is a very proud, free spirited woman who is lovingly possessive of creatures she adores. In the original play, she and Oberon argue over what to do with an Indian prince, with the latter wanting him to become a knight, despite Titania’s refusal.

Something similar happens to her and Chise, whom she wants to stay in the fae kingdom instead of the human world because her magical power will cause her to die. While appearing very compassionate, she keeps Oberon in check and can banish anyone from the land if she doesn’t like them. 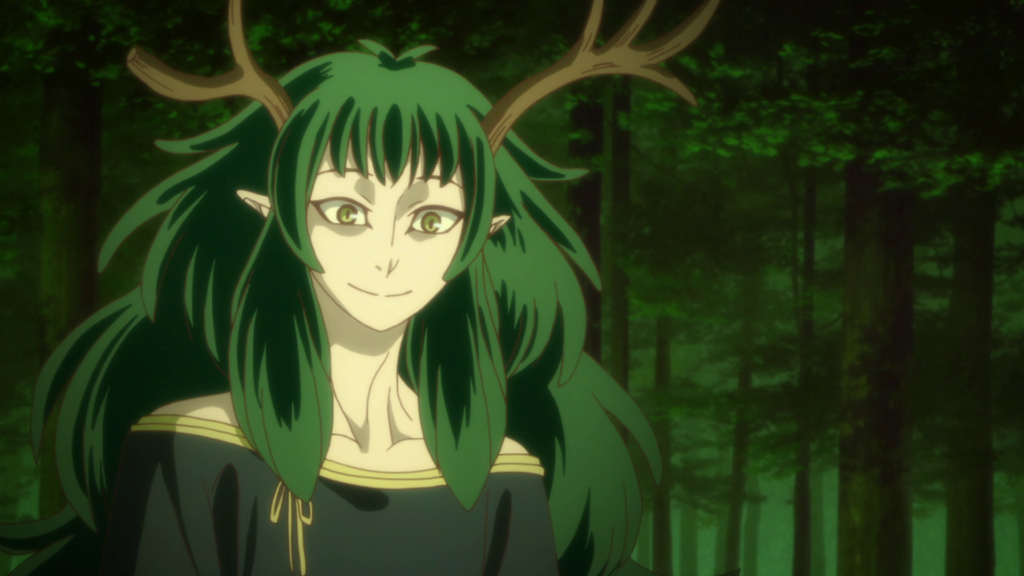 Oberon, on the other hand, maintains his carefree personality while being aware of more things than he shares. His body is that of a regular man with deer hooves and horns, resembling a satyr with a youthful appearance. He appears to resent Elias for keeping his current façade, but backs off for the sake of Chise. 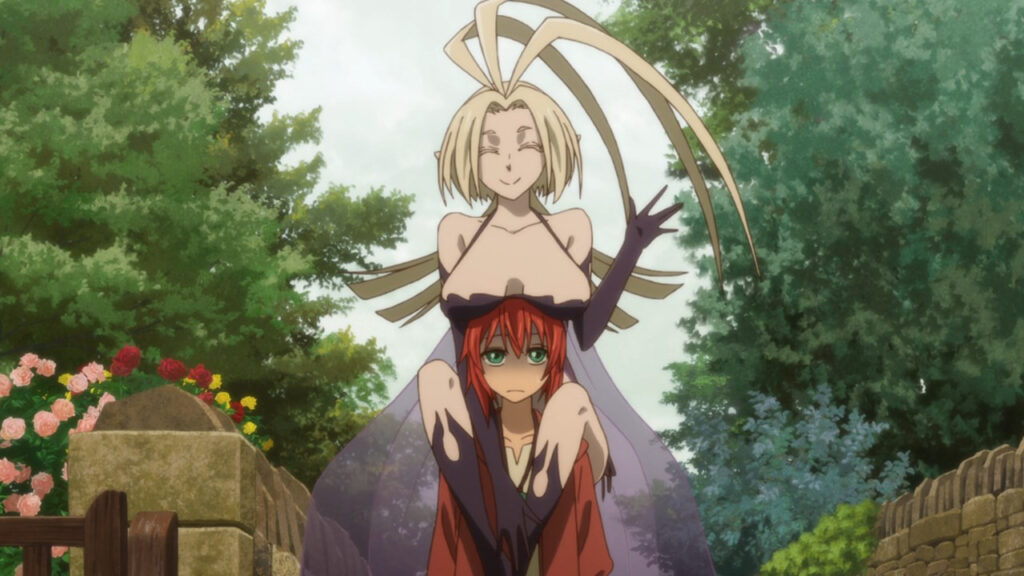 Redcurrant is a type of vampiric fae known as the Leánnan Sídhe. This fairy traces its roots in Irish folklore and takes human lovers whose lifespan is shortened during their time together. Despite this, the humans are said to live very inspiring lives… for example, artists living with the fairy will produce magnificent works.

Redcurrant is depicted as a beautiful woman with a curvaceous figure in a revealing outfit. Her blood-red eyes are a stark contrast to her blonde hair. In her past, she seduced and drained the life of her male lovers until meeting the widowed Joel Garland. He isn’t able to see or hear her, but the time she’s spent with him made her reconsider her lifestyle until his eventual death. Nowadays, she watches over his garden until the world ends. 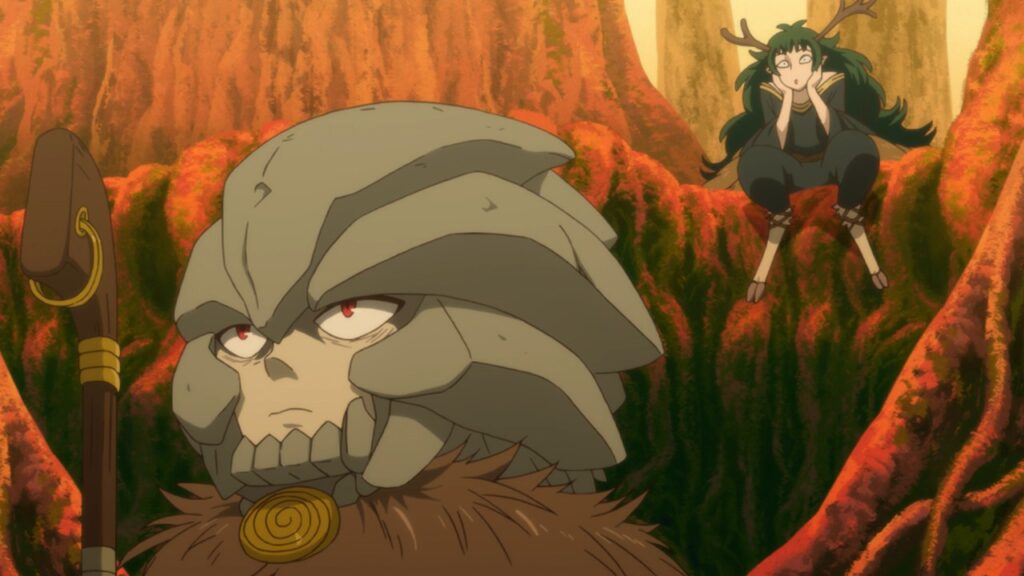 Besides being the title of a late 90s action anime, Spriggan serves under Titania and Oberon as their protector. He’s a small creature with a hard stone head and the ability to change his body size whenever the situation calls for it. He’s sworn to not only protect Queen Titania, but also all the remaining fae outside the spirit realm. He’s very stern and generally dislikes humans because of all the trouble they cause. Despite this, he shows some kindness toward any fae he encounters.

Spriggan is based on the eponymous creatures from Cornish folklore of the Cornwall people. They’re known for being ugly beings with an unpleasant personality and serve as guardians of treasures and ruins. Like some fae, they like to cause mischief by either sending whirlwinds to scare travelers, creating storms to destroy crops, or kidnapping children.

Arguably the main antagonist of the series, Joseph causes trouble for Chise and Elias whenever he pleases. He has lived for over two millennia and is a hybrid character between a young grave keeper (Joseph) and The Wandering Jew. Some of his abilities include necromancy, sorcery, and body possession of another person. 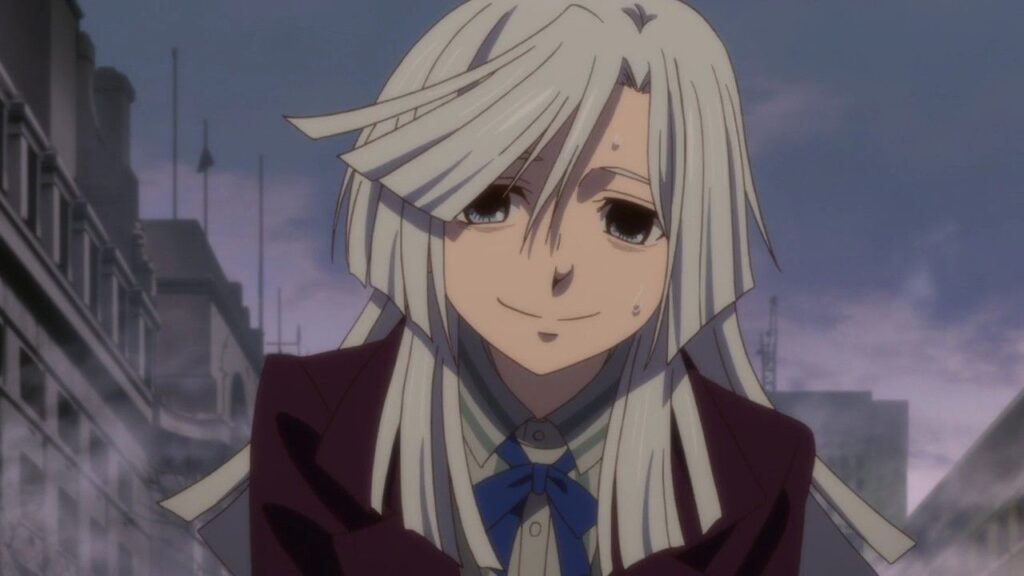 Joseph was once a young gravedigger who met a weakened Cartaphilus. Wanting to help him, he merges with his spirit, but unfortunately succumbs to the effects of his immortality and eternal pain. His efforts to remember the cause and rid himself of this course have led him to commit many atrocities, erasing any empathy from his kind former self. He is later stopped by Chise and Elias and forcibly put to sleep in an underground property.

The Wandering Jew is based on the legend of an immortal man cursed to roam the Earth after mocking Jesus as he marched on to crucifixion. Until the Second Coming of Christ, he can’t experience death and stories of him have been spread throughout Europe from the 13th century, inspiring other legends in Latin America, Asia, and North America among others.

The characterization of the figure has unfortunately been used as a means to discriminate against Jewish people and is seldom used today. That’s probably the reason why the English localization didn’t use the alias, opting to instead use ‘Joseph’ and ‘Cartaphilus.’

The Ancient Magus Bride is currently streaming on Crunchyroll.