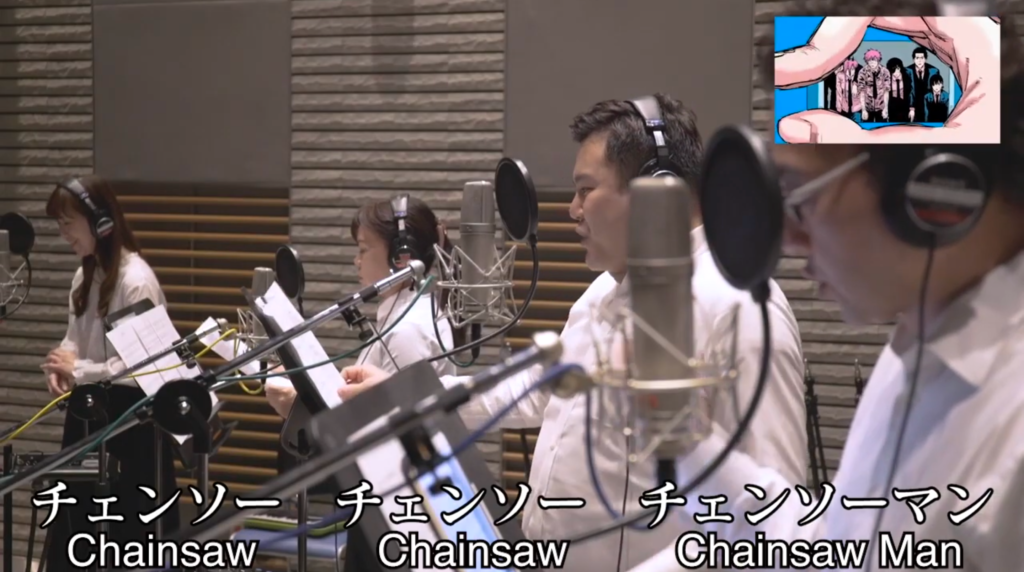 Remember that crazy Chainsaw Man PV from a year back? Yeah, the one with the screaming. You know the one. VIZ Media recently released an English-subtitled version to promote the English release of volume 1, along with a special look at how it was made. Coming in at just under 1 minute 30, ‘Behind the Music | Chainsaw Man’ is entertaining enough that it deserves its own write-up.

Seriously, you have to wonder what these professional opera singers (at least, that’s what I assume they are) thought when they first got the offer for this job. “Hey, we’re going to need you to say ‘Chainsaw Man’ over and over again while also occasionally singing. Think you can do it?” They do seem to be having a lot of fun, however, as they get pretty into it. Special shoutout to the guy on the right who wags his finger along like he’s at some sort of heavy metal concert.

Of course, all of the comments below ‘Behind the Music | Chainsaw Man’ are flooded with people asking about the eventual anime adaptation. To those people, we say: it will happen at some point, but not right now. Stop asking.

Still, one sentiment that we do agree with is this: the fact that something like the song featured in ‘Behind the Music | Chainsaw Man’ needs to be the opening theme when it does. I’m sure that the opera singers featured would also be happy to come back and do it.

The golden question is, however, what would be the ending theme? Going from past adaptations, it would need to be a lot more low-key – everybody knows that the OP is time to get hyped while the ED is time to chill out.

Luckily, Twitter user ChensoFan already gave us a taste of what this might look like: using two songs from UNCHAIN, they have created two different versions of a possible Chainsaw Man ED. Season one and season two maybe?

You can watch ‘Behind the Music | Chainsaw Man’ via VIZ Media’s official YouTube channel and also pick up volume 1 in English via their website.