U Gotta Groove – The Rise of Konami’s BEMANI Series 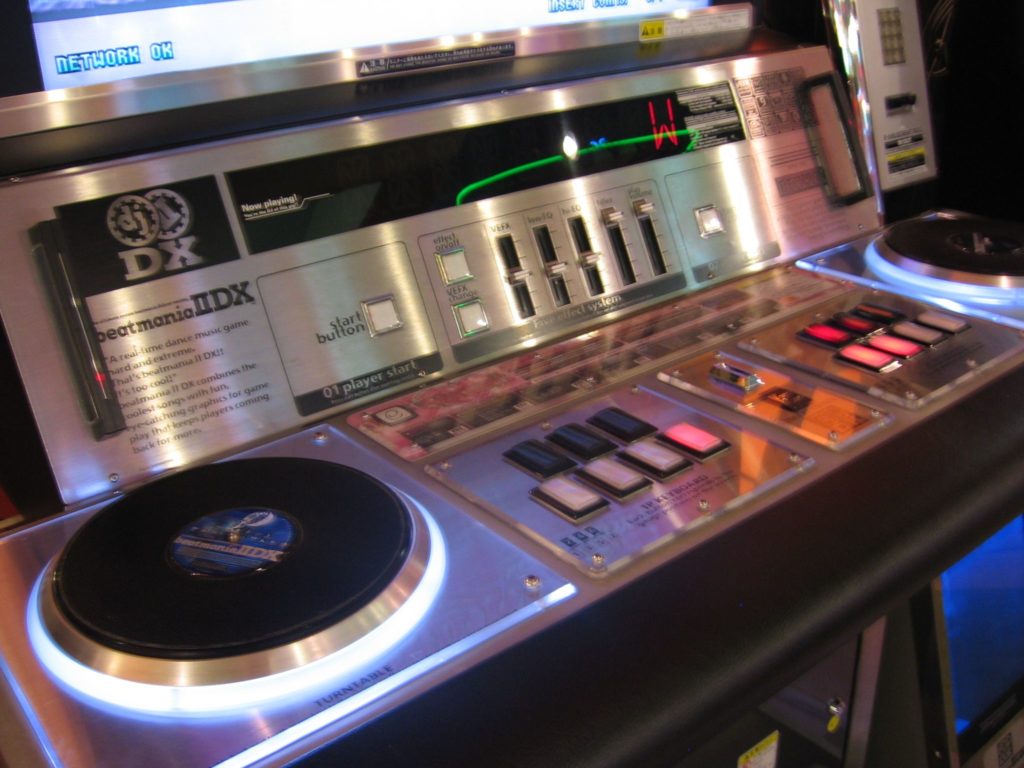 Not only did it provide the world with a completely new way to enjoy certain types of games, but it completely carved the history for this genre of games as we know it. Now we all know that Konami didn’t exactly invent rhythm games, I mean who can forget PaRappa the Rapper?

The BEMANI division was founded in 1997 from what used to be known as the Konami Game & Music Division or “G.M.D” for short. Upon the immense success from their first title “beatmania”, they changed the name of the department to the BEMANI division and started to make rhythm games based off of other types of musical entertainment such as Dancing, Guitar, and Drums. With that, let’s take a look at what the Bemani Division has released over the years.

Writing History, One Game at a Time

I want to take a moment to outline the family tree or lineage of the Bemani franchise. It’s not just the main 4 games that everyone thinks about in DDR, Beatmania, Beatmania IIDX, and Pop’n Music. Let’s take a look at everything that falls under the Bemani moniker;

The original bemani game consists of 5 keys which are intended to be hit with the rhythm when the notes hit the timeline.

The successor to Beatmania was a complete overhaul to the game mechanics by adding 2 additional buttons and a complete redesign of the cabinet. Beatmania IIDX is still immensely popular and on its 27th iteration.

The revival of the 5 key beatmania game with an updated cabinet and interface. The game also used a floppy disk to save users’ scores, had a built-in headphone jack, and used a foot pedal for certain songs in the game.

The original dance game from Konami utilizing 4 panels in an up, down, left, right formation.

A one player version of the Dance Dance Revolution game with two additional panels added at Diagonal Up-Left and Diagonal Up-Right.

A game that uses a similar concept to Beatmania with notes falling down on a playfield which requires users to hit the proper note in time with the music. This game uses 9 large bubble-type buttons instead of the smaller rectangular buttons.

A game similar to Dance Dance Revolution where players stand on a stage and step on notes to the beat of the song. This game has 9 panels opposed to the 4 panels on DDR and the notes are key-sounded to the music.

Not to be confused with Guitar Hero, Guitar Freaks uses a guitar controller with 3 buttons and a strum where players play music on the guitar when notes hit the timeline. This game can be linked with DrumMania to form a “band”. Past iterations of the game could also link with Keyboardmania.

A game where users beat the drums to the beat when notes hit the timeline. It can be linked with GuitarFreaks to form a “band”. Previous releases could also link with Keyboardmania.

A game that used a midi keyboard to simulate playing the keyboard in a band. The game had a staggeringly difficult learning curve which leads to its low popularity. This game could also link with GuitarFreaks and DrumMania to form a band.

A game where players danced using 5 sensors placed between them and the screen to perform “para-para” dance routines.

A single-player game that can be linked between 3 other cabinets to total a 4 player experience. This game can also be played online with players around the world where Jubeat is available. Players are required to tap on of the 16 squares on the play field in time with the music.

A touch screen game where players have to tap objects when they hit the timeline. It’s quite reminiscent of air-hockey. This game can also be played online with players from around the world where the game is available.

A game that is reminiscent of beatmania in concept, but rather than using a turntable, there are two effect knobs that are placed diagonally above the left and right-most buttons on the main playfield. This game consists mostly of songs that are submitted from independent music producers through the Sound Voltex FLOOR contests. This game can also be played online with 3 additional players from around the world where the game is available.

A completely free space dance game based on Microsoft’s Kinect technology. The game uses the Kinect to allow players to dance in real-time with the in-game indicators.

One of the more obscure games in the Bemani franchise. The game had players hitting TomTom drums to the beat and corresponding notes on-screen.

Another touch screen game that had players hitting notes in 8 different directions as they appear on the screen. This game had a short life span of fewer than 3 years before being discontinued.

A unique music game that had players hitting five spinnable discs on the playfield as well as a foot pedal. The game had contests for not only music in the game but art as well. Where the game showed promise, it didn’t attract enough fans and the game was ultimately discontinued after 3 years.

Konami’s second attempt at a piano style game, NOSTALGIA however unlike Keyboardmania where players had to hit a specific key, NOSTALGIA just requires players to hit a key `zone`. The game was released to be placed in BeatStream cabinets which went offline after support for the game ended.

The spiritual evolution to DDR, DANCERUSH STARDOM allows players to have another free-form dance space where they are required to step with the indicators on the screen (Left and Right). The game also features a sensor which tracks the player’s vertical movement as well.

While some of the Bemani games which have been released in the past are now considered end-of-life and are no longer receiving any updates or new versions, there are three arcade games which Konami had originally intended to release but they were cancelled for one reason or another. Those games were;

RAP FREAKS was a game which allowed players to play with their own voice. Players were also able to tap a beat anywhere on the play field by using the “Hand Clapper”. Aside from this, there really isn’t much known about this game.

OTOIROHA has similar gameplay to SOUND VOLTEX with four transparent buttons over the screen similar to Jubeat and two sliders on the side of the cabinet that needed to be slid into certain positions, a la the knobs of SOUND VOLTEX.

Welcome to the CYBER BEATNATION

KONAMI has essentially captivated the market with its BEMANI series of games and doesn’t seem to be showing any bit of want or need to slow down. With a wide variety of music being contributed by Konami’s internal Bemani Sound Team as well as external artists alike, there is certainly that you will find audio wise that tickles your fancy. As I’ve recommended many times across my other articles regarding music games, if you live in the states near a Round1, go play some of them. You certainly won’t be disappointed. If you live in Asia or Japan, you really have no excuse not to try them. There IS a reason after all that they’re going on 22 years of making these games.