We had the privilege of attending the inaugural matches and opening ceremony for the First stage of the BEMANI PRO LEAGUE.

The event kicked off with the six teams being introduced one by one and taking the center of the stage. Once here, they were greeted by Yoshitaka Nishimura, long-time BEMANI composer, and Corporate Officer of Konami Amusement. It was here where he shared some words regarding the concept of the BEMANI PRO LEAGUE, wishing each of the teams the best of luck and passing the mic off to Mori Icchou who welcomed everyone to BEMANI PRO LEAGUE and announced the DJ for the event, kors k, who performed the opening theme of BEMANI PRO LEAGUE. 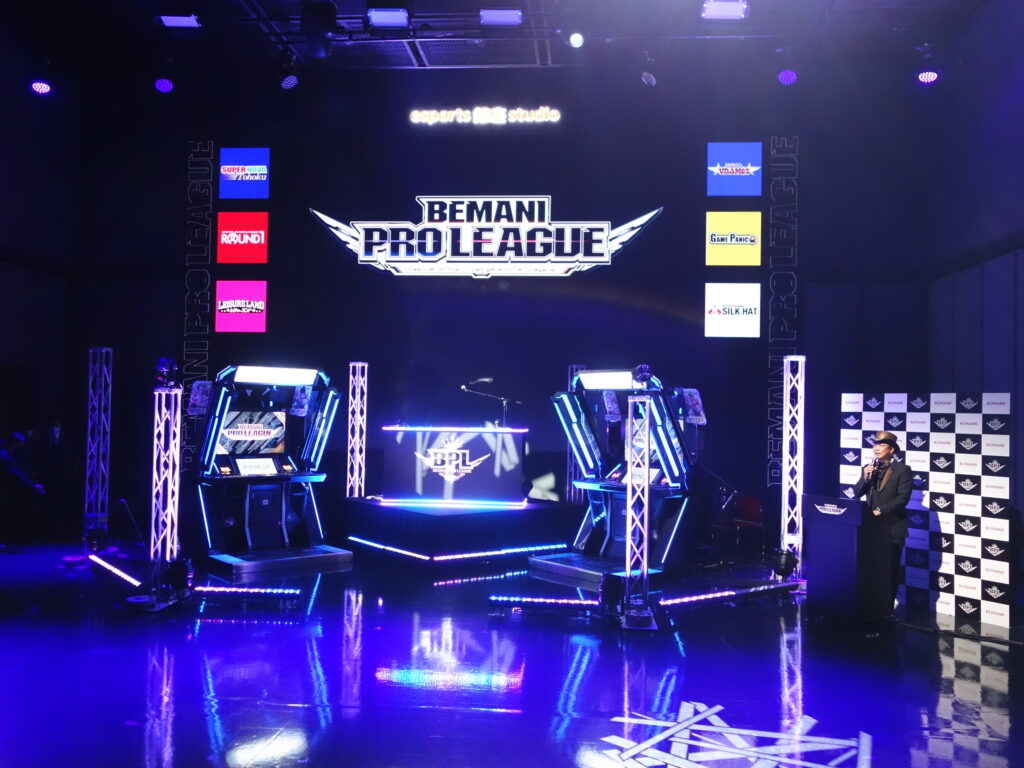 The first two rounds of BPL consisted of each of the teams playing three rounds against each other. Each win nets the winning team three points, a draw will equal one point for the team, and a loss will equal zero points for the team. Needless to say, winning a match will certainly give your team the upper hand when it comes to progressing in the league. With BPL officially underway, the first match of the inaugural season was the APINA VRAMeS vs. ROUND1. 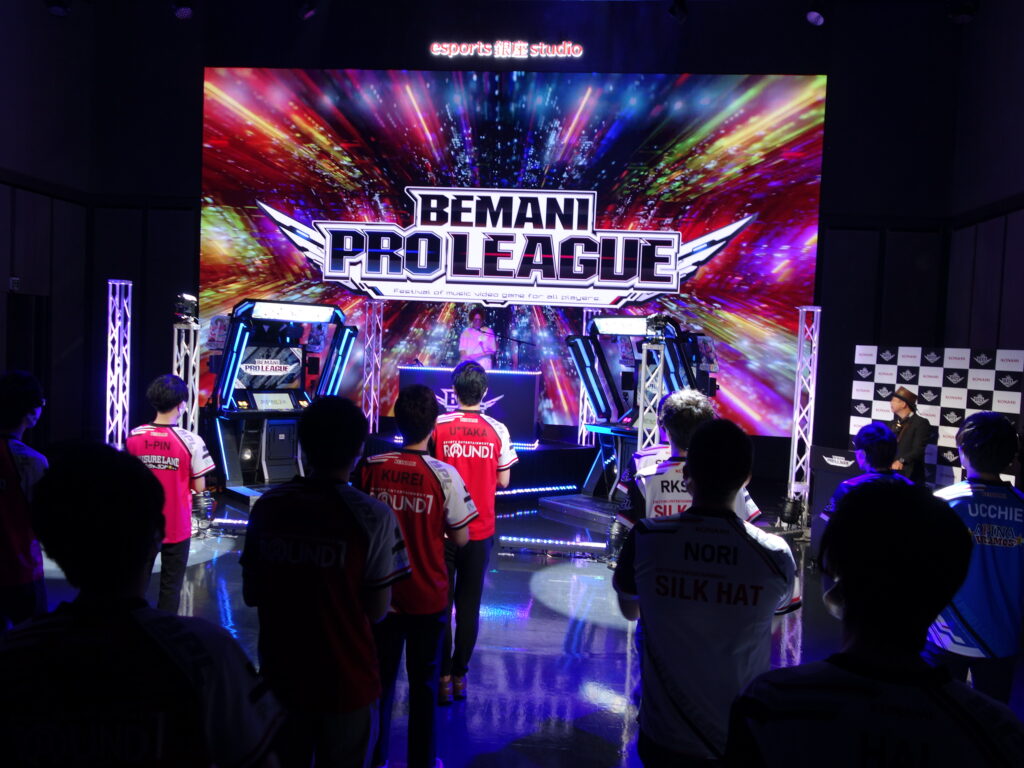 The first match was KUREI vs. NIKE. in a battle with the songs focusing on chord-heavy note charts. KUREI picked the another chart of ‘Hurry Hurry’ by Masayoshi Iimori and won by only one point. I think it goes without saying that the entire match was a nail-biter. After this, they played NIKE.’s pick of ‘Kokokara Yoroshiku Daisakusen 143’ where NIKE. returned fire with defeating KUREI, by only one point. The result between the two equaled in a draw with each team netting one point. 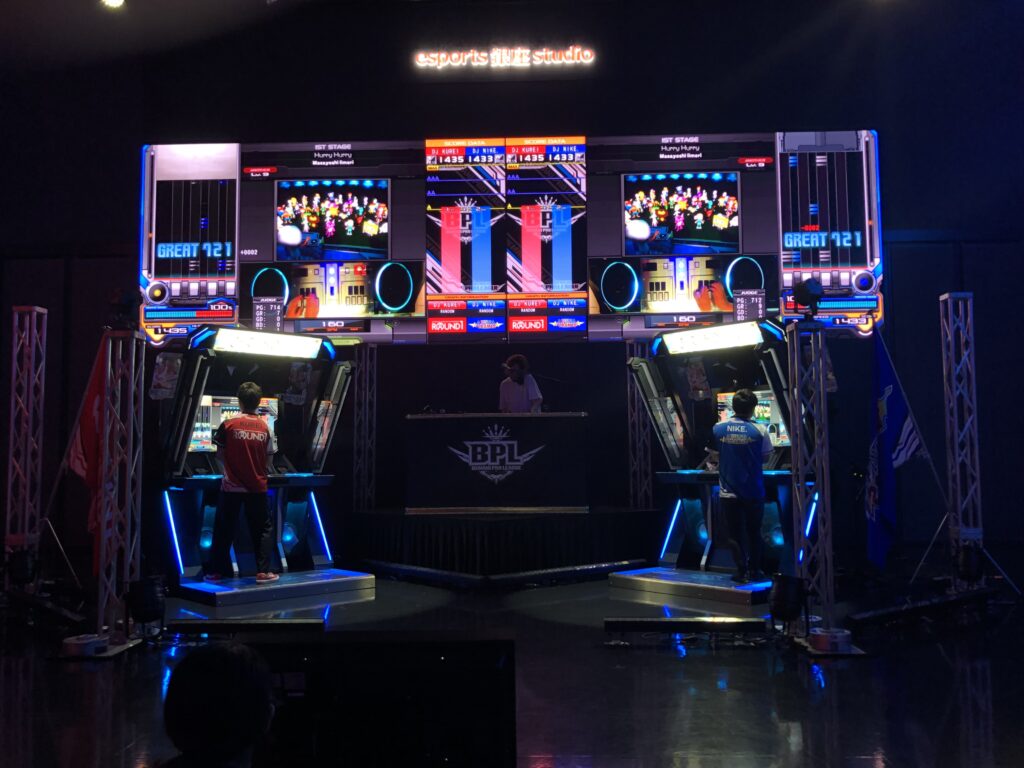 Following this match, was ANSA vs. KENTAN in a match consisting of scratch-heavy charts. If you’ve ever played beatmania IIDX, you would know that scratch-heavy charts can be some of the most difficult in the game and require an immense amount of skill to execute them properly. ANSA chose the another version of ‘Wonder Bullfighter’ by Twin Amadeus and won by a staggering margin of thirty-one points. The following match saw the two pro-players battling each other on the another version of ‘Uh-Oh’ by kors k as KENTAN’s choice of song. It was clear that KENTAN knew what he was doing with this as he took the win with only six points. This match also ended in a draw, with both teams still neck and neck. 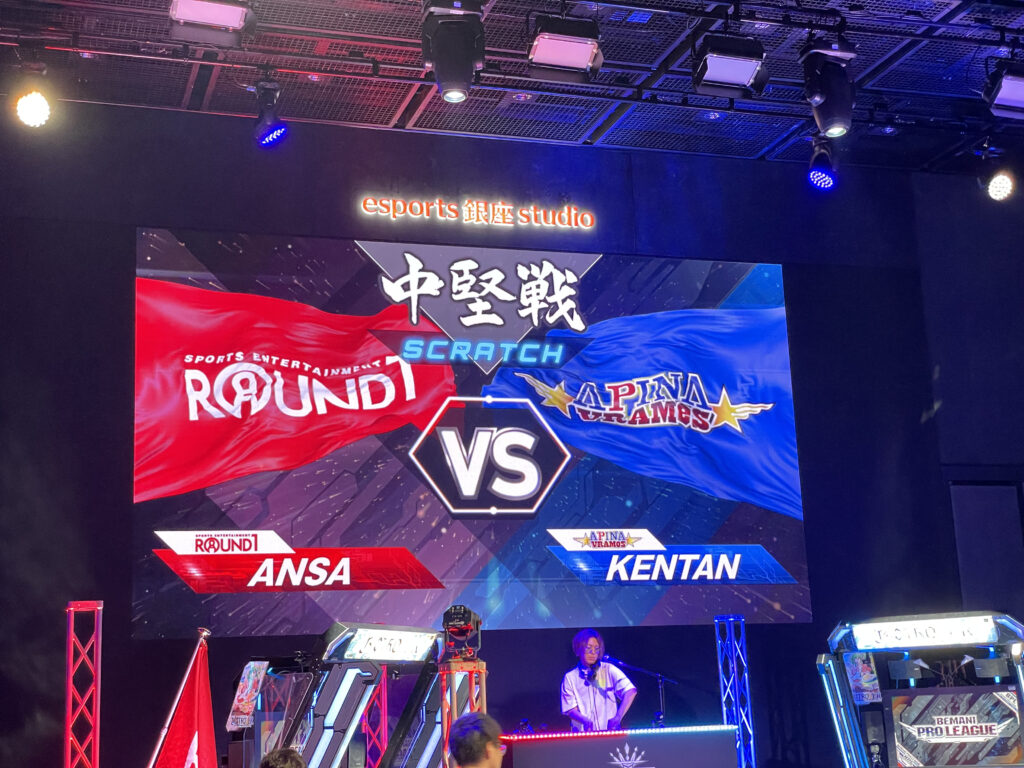 After this match was the one that I personally was most interested in. The two monster players of each team, U*TAKA vs. DOLCE. in a battle consisting of sof-lan (tempo change) tracks. U*TAKA kicked things off by picking the Leggendaria version of ‘Titan’s Return’ by L.E.D. nudging a victory from Dolce. by sixteen points. Dolce. returned fire by choosing the another version of ‘Concertino in Blue’, a song that is known to give many players trouble. DOLCE. was able to secure a win by only a small margin by beating U*TAKA by only five points. Each of the matches between all three groups resulted in a draw. 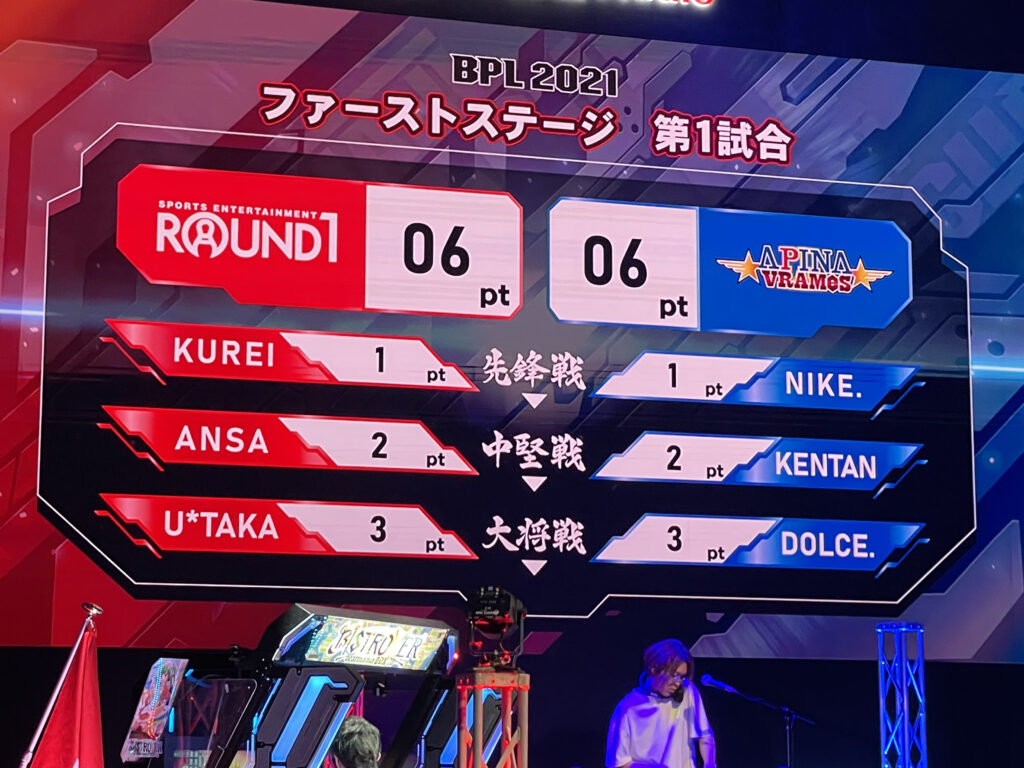 With the first battles completed, we moved on to the second set of battles consisting of matches between LEISURELAND and SUPER NOVA Tohoku. 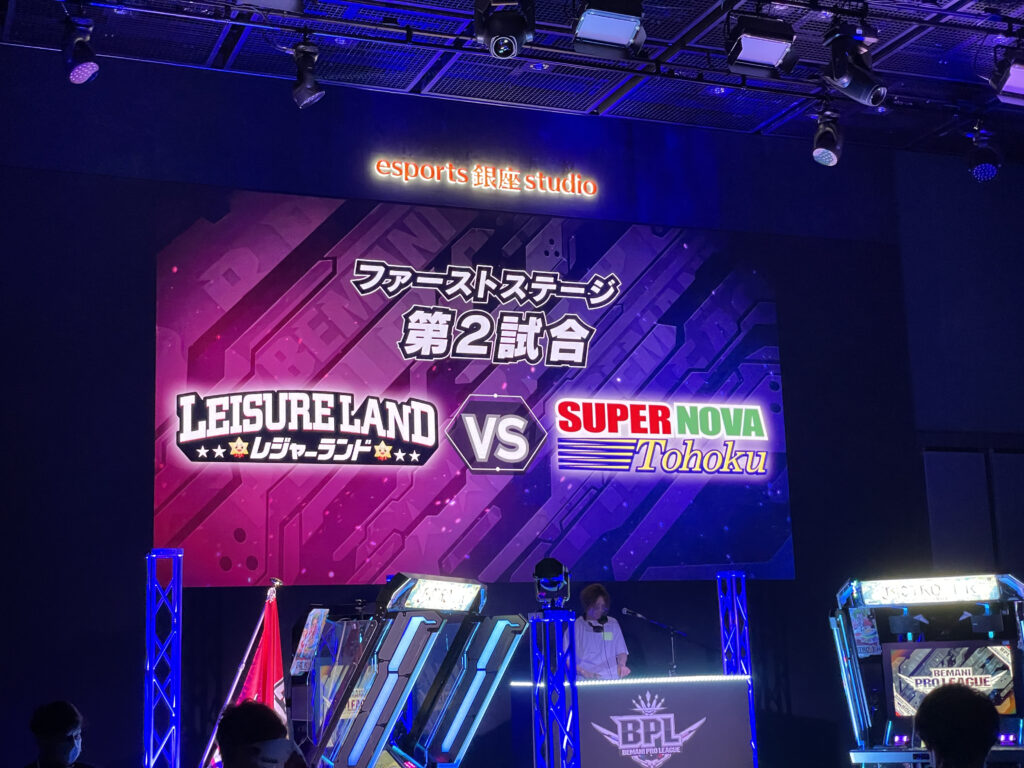 The first match between these two teams came from G* vs. FRIP in a battle featuring peak style charts. G* chose something that I personally never would have expected in a pro-level tournament with the another version of ‘Empathy’ from TaQ. He proved that he knew what he was doing with this pick, considering that it’s an older song from beatmania IIDX 4th Style beating out FRIP by a staggering thirty-four points. FRIP returned fire with another chart that I never thought that I would see in a tournament, the another of ‘Oosanbashi’ by Ucchies, defeating G* by only four points. This match resulted in a draw between the two teams. 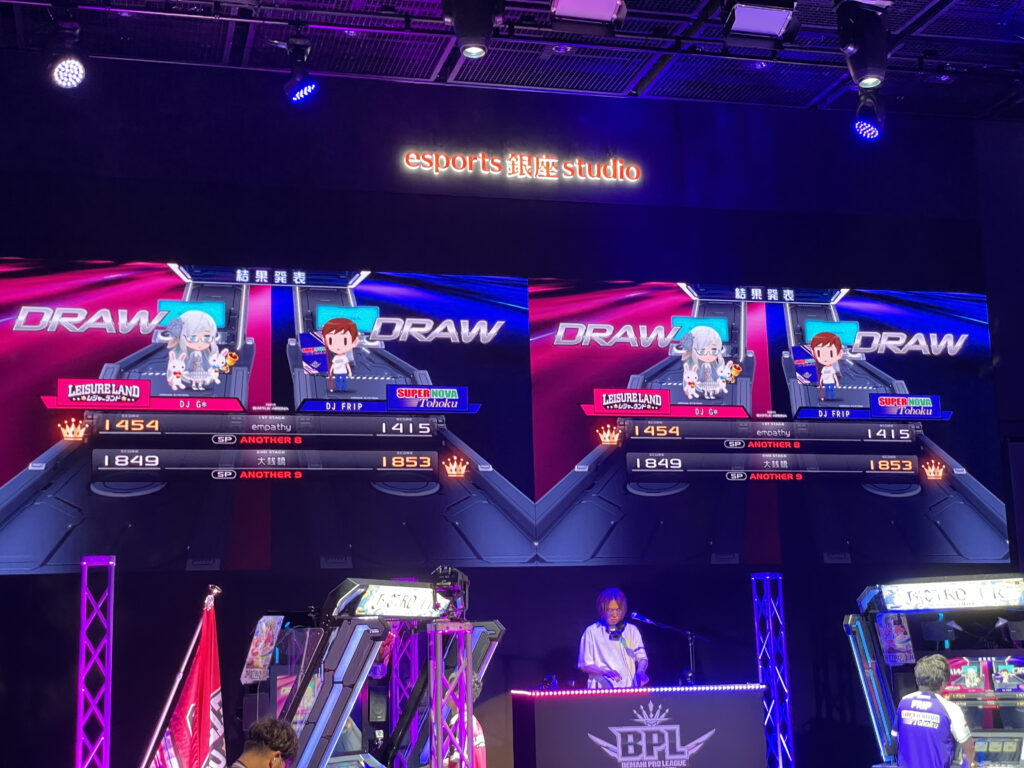 Following this match, we had a match between DINASO vs. CORIVE in a sof-lan battle. DINASO chose the another of ‘Four Pieces of Heaven’ by Lion. With this chart having a difficult speed up following a slow down halfway through the track. It has proven to be one of the more difficult tracks to overcome in beatmania IIDX 15 DJ TROOPERS. DINASO took the win on this one with a massive sixty-six-point lead. CORIVE answered back with a song that has haunted me personally whenever I play Arena Mode on beatmania IIDX 28 BISTROVER with ‘Op.31 Jojo’ by akiko. This battle saw CORIVE take the win by twenty-nine points, ending the match in a draw. 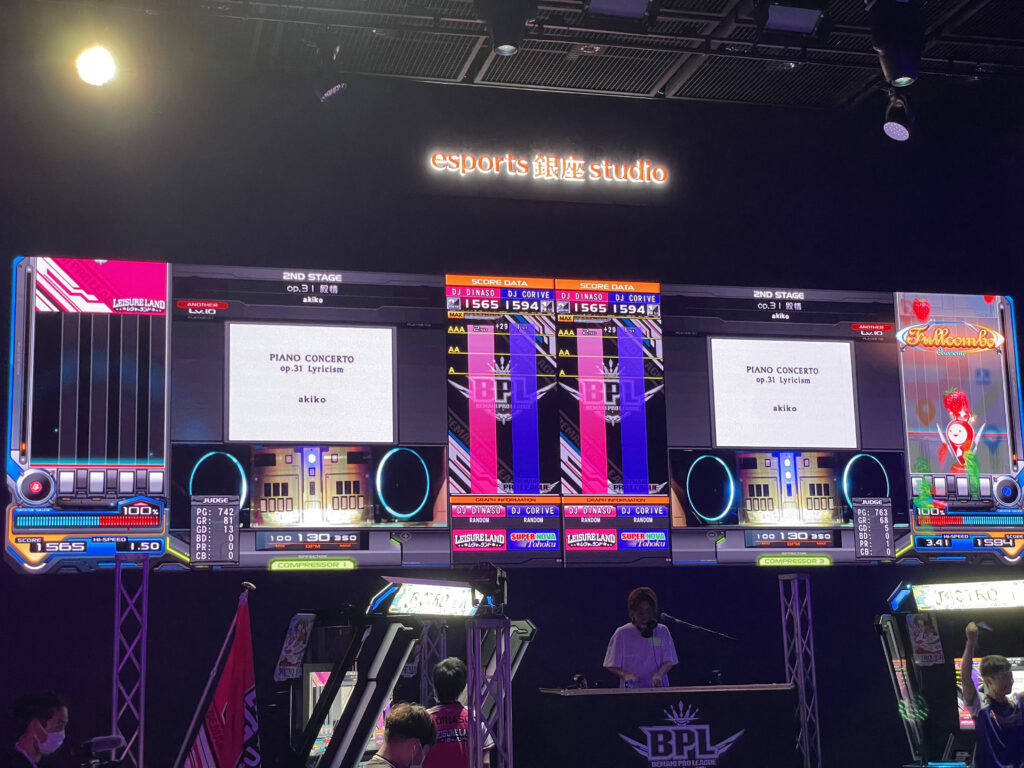 The last match of the day saw WELLOW vs. 1-PIN in a scratch song battle. 1-PIN chose a track by scratch master DJ Mass MAD Izm*, ‘Lords of the Roundtable’ another, defeating WELLOW by twenty-nine points. WELLOW returned fire with the another of ‘Watch Out Pt.2’ by DJ Mass MAD Izm* VS. DJ Yoshitaka only to win by a marginal eight points. This match also resulted in a draw between both teams. 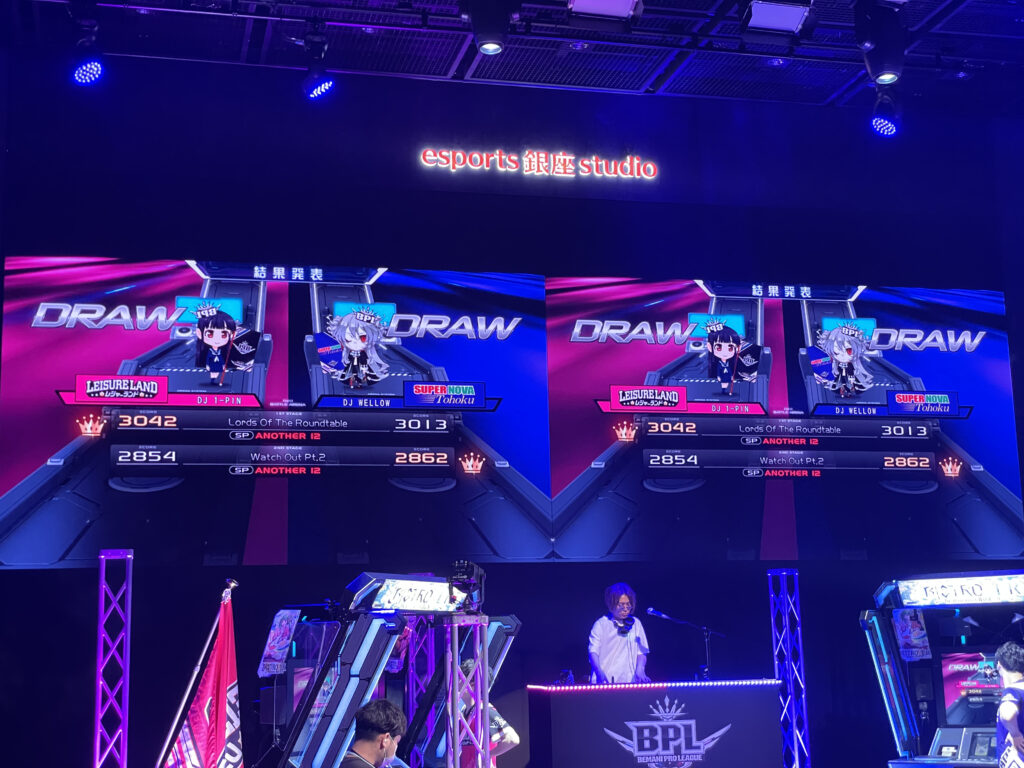 With inaugural matches for BEMANI PRO LEAGUE completed, I can’t wait to see what the other teams bring to the table and really look forward to seeing how the rest of the First stage of the series plays out. It really still is anyone’s game and with the winning team owners taking a planned ¥20,000,000 (Approx. $200,000 USD) as the prize, of course, there are a number of factors that can play into this. I think we will see a number of players achieving a level of play that we haven’t seen from them, ever.