Berserk Returns From Latest Hiatus via Young Animal This Month 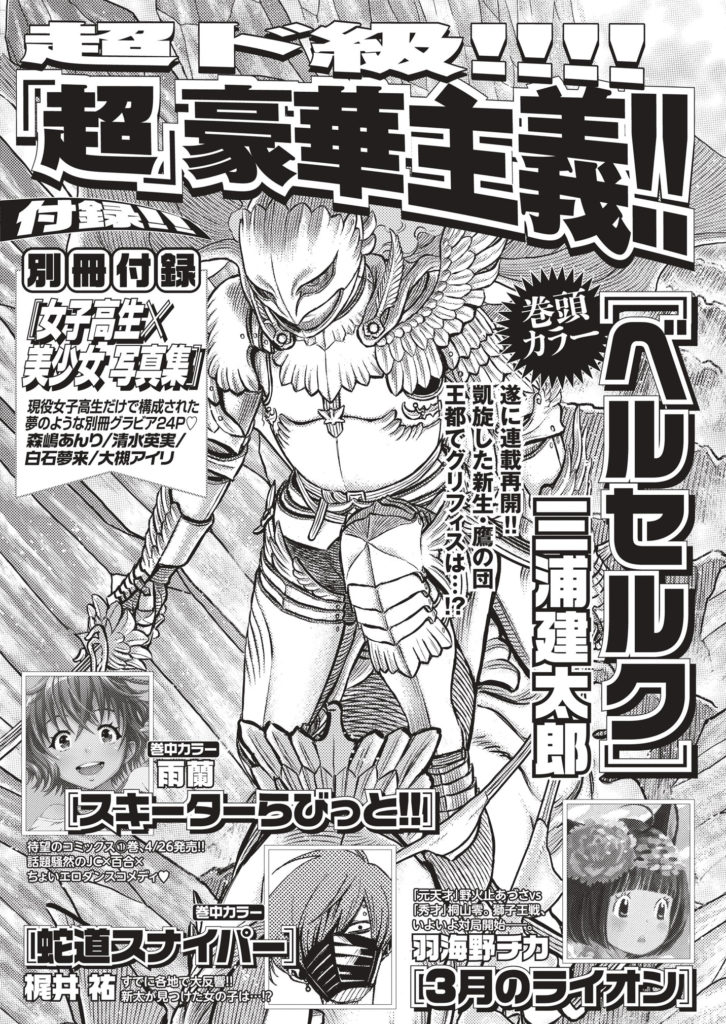 Berserk going on hiatus should never shock fans at this point. For well over a decade, the comic regularly goes on intermissions sometimes lasting well over half a year. However, Berserk coming off from break always pleasantly surprises the people who have stuck with it for this long. The website for Hakusensha’s Young Animal, where Berserk releases, announced that the April 26 edition of the magazine will feature a new chapter. Unfortunately, as a 12-year long Berserk reader, I know I can make an educated guess — new chapters probably won’t release for long.

Despite its frequent breaks and fans half-jokes about how author Kentaro Miura may pass before ever finishing his manga, Berserk remains one of the most popular comics of all time. The defining seinen manga first debuted in 1989 and, technically, still releases 30 years later. The last decade sees berserk averaging a new volume less than once a year. In fact, there was a three-year gap between 37 and 38, which released in 2013 and 2016 respectively. For perspective, volume 40 released in Japan in September 2018 and the comic has since been on hiatus until now.

Kentaro Miura’s epic probably doesn’t need an introduction. Berserk’s had three separate anime adaptions over the years, a number of games, and like Evangelion, has been memed into oblivion. Fans are in it for the long haul at this point; the frequent hiatuses only make us thirst more for what’s universally agreed upon as one of the best works for the medium. I think we all expect to be reading Berserk on our death beds. If you haven’t read the medieval masterpiece, you shouldn’t be intimidated by its 40 volume length. Chapters normally come out so slowly, you’ll have all the time in the world to catch up.