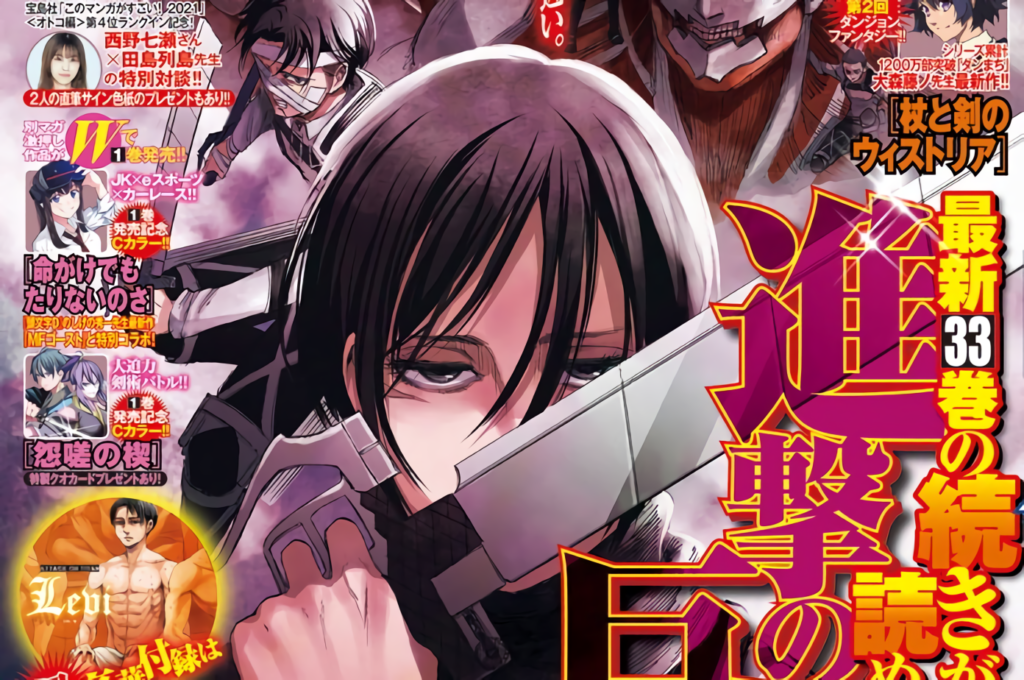 The print version of Bessatsu Shonen Magazine has seen record sales as its golden goose, Hajime Isayama’s Attack on Titan, draws ever closer to its conclusion on 9 April. The magazine’s latest issue no. 2 (on sale 9 January) was its highest-selling ever in its twelve-year history, according to information provided by Kodansha to Oricon.

In Oricon’s article, there are several reasons this issue of Bessatsu Shonen Magazine saw such record sales. First, this was the issue where the final end date of 7 April was announced for Attack on Titan: people wanted to have this historic edition for their collection. Second, this issue came with a pack-in can badge gift featuring Levi in a bath towel: the captain of the Survey Corps has always been extremely popular, so it’s perhaps no surprise that fans turned out in record numbers to get their hands on him.

This gives an indication as to why Attack on Titan has been allowed to continue for as long as it has: despite announcing several years ago that the conclusion was near, Hajime Isayama has kept on going, introducing new characters and new conflicts. We even already got a look at the final panel, although it has yet to appear in the story. Many other serialized series, such as The Promised Neverland, were not afforded this luxury as soon as the author announced that it was drawing to a close.

As this data shows, Attack on Titan is one of the main drivers of sales for Bessatsu Shonen Magazine, so it makes sense that Hajime Isayama would be given all the time in the world. Whether an impending conclusion can continue to drive sales of the magazine in the future remains to be seen. Although a series of chapters are set to be reprinted in Bessatsu in full color, who knows if that will prove compelling.

You can read Attack on Titan in English via Kodansha Comics.