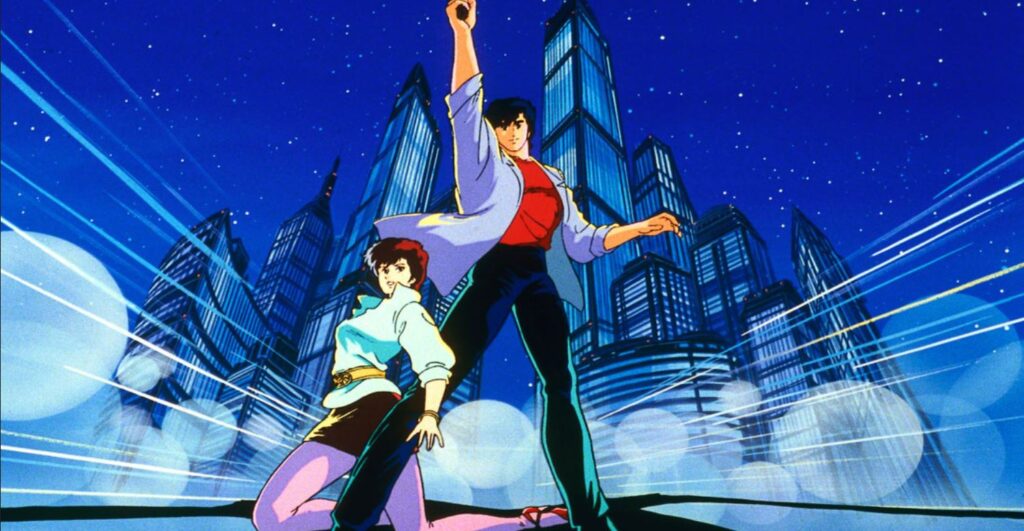 It might be a stretch to say City Hunter’s back in full swing, but the last couple of years have seen a marvelous renaissance of one of the quintessential 80s gems. 2019 saw the series’ first new animated entry in decades, City Hunter: Shinjuku Private Eyes, plus a French live-action adaptation called Nicky Larson. That same year, classic anime champions Discotek Media announced they’d be releasing the entire series on Blu-ray, and while that labor of love’s been a work in progress, much of it is now available to stream on RetroCrush!

If you’ve never seen the show, fix that immediately. If you have, then you already know that, like The Slayers, the entire City Hunter opening and endings collection rank amongst the best of all time. To celebrate the return of Tsukasa Hojo’s classic, we’re picking out our top five. If we had time for a couple more, ‘Go Go Heaven’ would’ve made the cut.

We love Yasuyuki Okamura around these parts. The man has survived scandals that have taken down many an aspiring Japanese celebrity, though the type a western audience wouldn’t bat an eye at. Part of why the Japanese music industry’s never been able to get rid of the dude is that he’s so damn good at what he does and has been consistently so for about four decades.

Whether we’re talking about his funky 80s fare like ‘Yellow’ or still going vocal beast mode on 2010s gems like the Space Dandy opening or DAOKO’s ‘Step Up Love’ (beasting her on her own track), the man undeniably has had and still has the magic touch.

‘Super Girl’ remains a classic track in his catalogue, and while it’s a little more breezy than some other cuts, those playful synth chirps and Okamura’s crooning-turned-rumbling chorus make it a real contender in the City Hunter opening and endings canon.

GWINKO’s ‘Downtown Game’ portends pure city-poppish bliss, despite being a ’91 cut considered to be past the cut-off date for the internet’s favorite sub-genre. Despite playing up certain City-Pop conventions like bright synth sounds, swirled up with accented guitar looks to produce that patented Bubble Era Atmosphere, you can hear hints of J-Pop’s future in the track.. and that makes it so interesting.

The deeper vocal style begins to creep on what artists like The Slayers’ Megumi Hayashibara would build a career on doing, in occasional heavier synthetic bursts found without. Being only a 13-episode show, ‘Downtown Game’ is the only City Hunter opening to come from the underappreciated City Hunter ‘91, but even if it wasn’t, it would probably still be the best one.

This is the first City Hunter opening there ever was, and has the dang show in its name. Usually, it’s a toss-up between ‘City Hunter Ai yo kienaide’ and our number one pick as to which is the most classic City Hunter song. Our placing the classic track at number three does tip our hand, but being third amongst the catalog of themes of one of the best series in anime history ain’t bad.

Kahoru Kohiruimaki’s tune comes packed with a splash of boogie, some shimmery guitar work, and a soaring Anison vocal hook that reverberates through the ages. It might be a bit less of a vibesy take on City Pop sounds than Gwinko’s ‘Downtown Game’, but the chorus on this one is City Hunter iconography all its own.

Perhaps the most controversial placement on this list; if there’s anyone left alive who’d consider anything about a top City Hunter opening and endings list controversial to begin with.

Not as iconic as ‘City Hunter, Ai yo kienaide’, the cutely named Fence of Defense tracked ooey gooey cheesy dad-rock heaven on ‘Sara’. With a chorus as beltable as ‘Don’t Stop Believin’ or Naruto’s ‘Fighting Dreamers’, the song instantly transports you to the halcyon days of bubble-era Shinjuku, You and your buds all in the widest-shouldered pastel suits you’ve ever seen, practically skipping down the streets of Kabukicho to hit up your favorite Cabaret Club after a hard week’s work making that economy bubble!

Anytime OTAQUEST staff members get the chance to do some karaoke, TM Network’s ‘Get Wild’ will always be in the song rotation. Nothing like a whole room belting ‘It’s your pain, it’s my pain, it’s somebody’s’ pain’ at the top of their lungs after everyone gulp’s down their fourth oolong-hi.

While the original show had two opening songs through its 51-episode run, it kept ‘Get Wild’ as its sole ending that entire time; exceedingly rare for an anime of that length.

How could you blame Sunrise for making that call with this absolute monster of a City Hunter song, though! The second you hear the sparsely introduced melody intertwine with sequentially programmed synth lines, you’re hooked. Never mind the song explodes into a delightful cacophony of TM Network vocalist Takashi Utsunomiya blasting delightfully nonsensical English phrases over Japanese musician / producer legend Tetsuya Komuro throwing everything he can at the wall, with it all sticking.

As far as all-timer anime openings go, not even ‘Cruel Angel Thesis’ has a CD release with 22 different versions of the song on it like ‘Get Wild’ does, complete with a 27-minute trance reinterpretation of the great anime opening. That says something, folks.

You can watch a lot of City Hunter openings and endings, and their accompanying episodes, on RetroCrush.