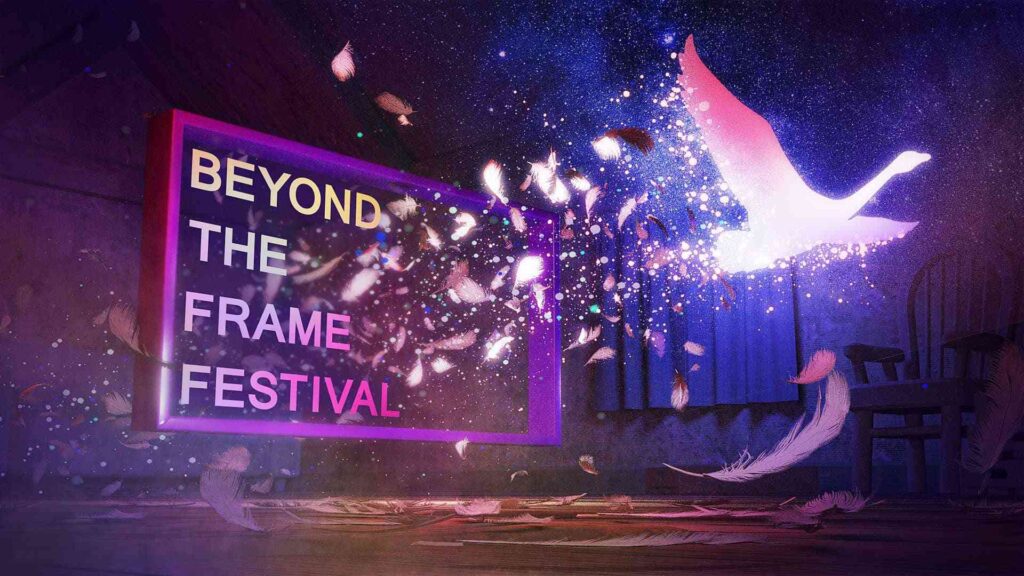 Beyond the Frame Festival is an upcoming VR film festival that kicks off this Friday. It will feature several VR projects and talk events free to access from around the world, and an awards category judged by Sion Sono, Ellie Omiya and Atsushi Fukuda.

VR film is a strange prospect, as on first glance they appear to be inherently inaccessible to the standard user. You can’t watch these films in a communal environment as you could a standard film in a cinema or with friends, and VR headsets are far from commonplace. As with any medium, however, the limitations and advantages of VR, most notably the ability to create an 360-degree space that further immerses a viewer into the work they are experiencing, can make for a number of exciting filmmaking experiences, both animated and live-action. Beyond the Frame Festival is a free online film festival promising to celebrate these films, and best of all: you won’t need a VR headset to experience the films on offer!

Set to kick off this Friday and running until 21 February, Beyond the Frame Festival seeks to celebrate works that are not bound by the frames of a traditional display; works that take technology and use it to create immersive stories and ‘help such filmmakers spread their wings to the world.’

Beyond the Frame Festival is allowing people the opportunity to experience a film festival from home, crafting a virtual venue not too dissimilar to something like Comic VKet, which attendees can explore and use to access the numerous films on offer. Obviously, the films are best experienced with a VR headset and full immersion, but if this is not possible, viewers can use a smartphone or PC to wander around and view the films.

Instead, those without a VR headset will be able to swipe around their screen to change their viewing angle of the film. A good substitute if not so immersive, it’s nice to see some other method being offered to experience these films.

What films will you be watching at Beyond the Frame Festival, though? Well, with numerous films both animated and live-action on the way from a range of creators from Japan and around the world, there’s a lot on offer here.

Two of the most interesting inclusions are interactive animated experiences that have engaging premises and potential, making them films I want to check out when the festival starts. One of these is Beat, a film by Keisuke Itoh that tells the story of a robot brought to life by the user’s heartbeat which grows while communicating with what’s around it. It won an award for VR filmmaking at Venice Film Festival and is being screened out of competition here. Its premise and teaser trailer suggest it could be one of the highlights of the festival.

The other, more sobering piece is a film called The Book of Distance by Randall Okita. This tells the interactive story of Yonezo Okita, a man who left Hiroshima for Canada in 1935 and overcame hardship in World War II and lived through concentration camps. The story is told by his grandson, the director of this film.

Away from the interactive experiences, the biggest film on the list is without a doubt Blue Thermal VR, an adaptation of the manga of the same name by Special Actors and One Cut of the Dead director Shinichiro Ueda. Depicting an aviation club at a Japanese high school, this is arguably the biggest film at the event and a must-see to experience just how Ueda works in this new format.

Look at Me is an interesting Taiwanese production commenting on a world with VR proliferation and the need for real interactions vs virtual.

The horror VR project Go Home by Takashi Shimizu and Yoshihiro Nishimura won’t be for the weak of heart.

Away from the 19 films being showcased, several virtual talks will take place throughout the event that will discuss VR filmmaking with creatives from Japan and around the world. On 17 February at 7 p.m. Japan time, Hiroko Fujioka (Producer, WOWOW INC.), Kenji Ishimaru (CEO & Executive Producer, Kodansha VR Lab, Ltd.), Shigeki Tanaka (General Manager, Sony Music Entertainment (Japan) Inc.) and Mikio Gunji (Producer, Production IG) will gather to discuss how these major studios can compete within the world of VR filmmaking and grab the attention of the general public. Another brings the creators of a number of films featured in Beyond the Frame Festival to discuss the differences in creating a film in VR.

Between films and talks, Beyond the Frame Festival promises to be a deep dive into VR filmmaking, and one that recognizes talent. At the end of the event, the Grand Prix for Best Film, VR Story Award and VR Experience Award will be presented by the jury of the festival: prolific Japanese filmmaker Sion Sono, Ellie Omiya,and Atsushi Fukuda. The official navigator will lead both the awards ceremony at the end of the event and the start of the festival, and in fitting with the VR theming, Japanese VTuber Uka Todoki will be taking on this role.

Beyond the Frame Festival will take place from 12 until 21 February, and you can find out more on the film festival’s official website.